- Barcelona outside the Walls & Baetulo
(left - Mosaic at Italica; right - decoration at the Alcazar of Seville)

You may wish to see an introductory page to this section or a page on Roman Barcelona within the walls first. 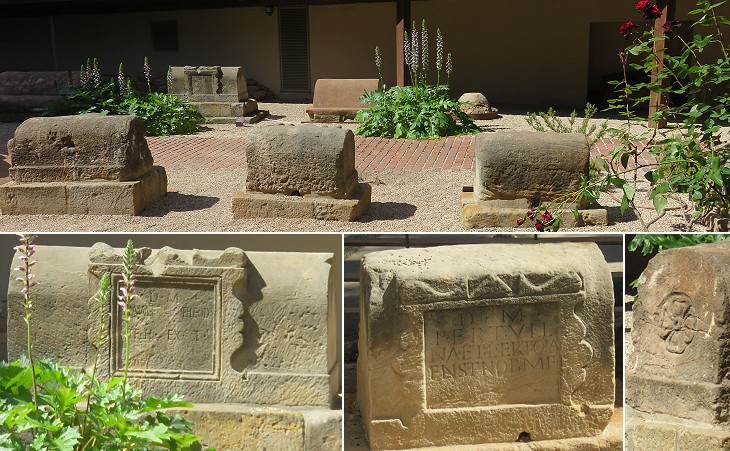 In the 1950s an area to the west of the Roman town was rebuilt after it had been damaged during the Spanish Civil War. In 1954 chance excavations brought to light a small necropolis of the Ist-IIIrd centuries AD. Some thirty inscriptions were found on cupae, small barrel-shaped tombstones which can be seen also at Merida. They belonged to ordinary people and as usual the inscriptions are full of abbreviations, e.g. D(is) M(anibus) and B(ene) M(erenti) F(ecerunt). See similar tombstones in the Great Necropolis of Porto).

Ancient walls at Santa Caterina, to the east of the Roman town

In the 1990s archaeological excavations on the site of a medieval convent which had been demolished to make room for a covered market led to the identification of a necropolis of the Late Empire. The Roman elements are not easily distinguishable from the medieval ones. Baetulo, today's Badalona, was an Iberian town which has not been identified. It grew in the Ist century BC and it is mentioned by many Roman historians and geographers. According to Pliny its inhabitants enjoyed Roman citizenship. It is located 6 miles east of Barcelona and today it is part of the Metropolitan Area of Barcelona. In 1954 Roman baths were discovered on a low hill near the coast. 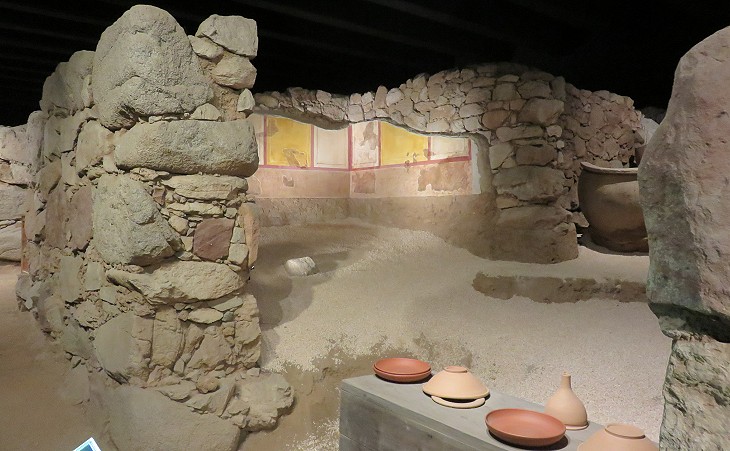 Museum of Badalona: "thermopolium" (street restaurant) on the Decumanus Maximus

Archaeological excavations which began at the baths eventually led to unearthing the central part of the town with its Decumanus Maximus, the main east-west street, along which a thermopolium, similar to those at Pompeii and other shops were lined up. 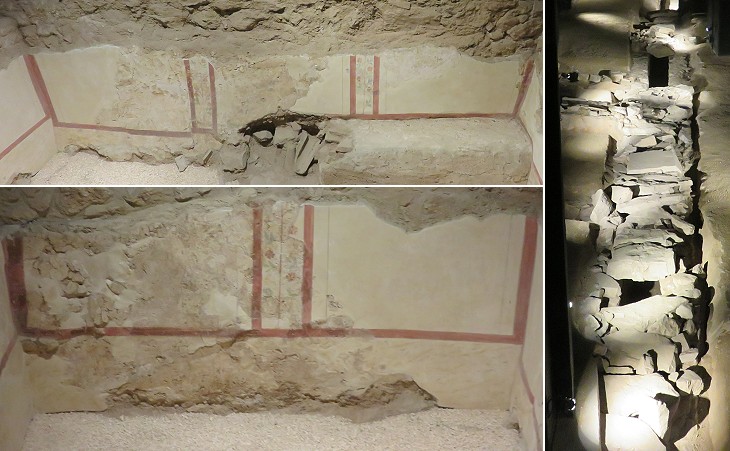 In 1954 a museum was built above the archaeological site of the baths. It houses also exhibits from other areas of the Roman town, namely a domus (a Roman house), a garden with a pool and a water duct. The archaeological sites of Badalona are all underground and therefore they can only be seen with artificial light, something which often occurs in Spain, e.g. at Sagunto and Seville. 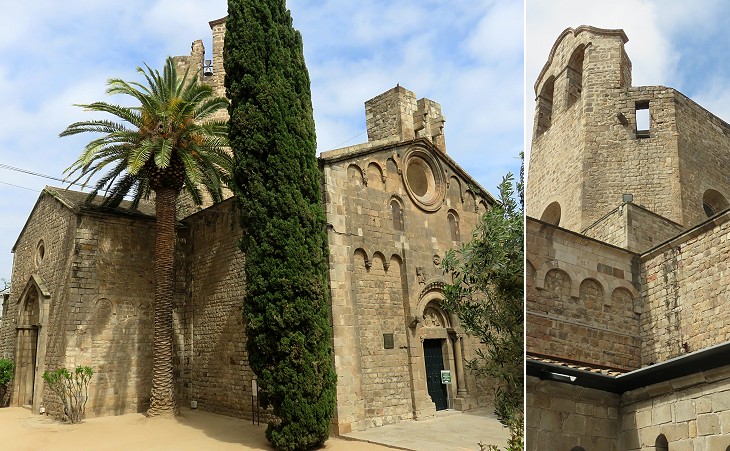 San Pablo del Campo is so called because once outside the town. (..) It was built in 913 by Wilfred II, as an inscription in the wall near the cloister shows.
Richard Ford - A Handbook for Travellers in Spain - 1855
The current church was actually built in the early XIIth century because the old one had been greatly damaged in 985 when Barcelona was raided by the troops of Al-Mansur, hajib (highest officer) of Hisham II Caliph of Cordoba. The lantern tower was probably meant to be a fortification, because the church was outside the walls.

The Muslim rule over Barcelona lasted less than a century and it did not leave a mark on the monuments of the town. Barcelona and Catalonia were the town and the region through which the Romanesque style which was developed in France reached northern Spain. One of its features was the reuse of ancient materials for the decoration of new buildings and the wide adoption of round arches (see a page on the Romanesque churches of Segovia).
The image used as background for this page shows a cross on the lintel of the portal shown above. 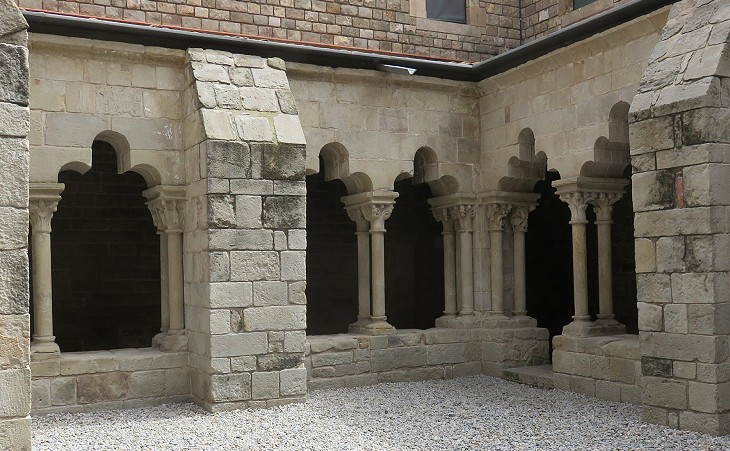 Observe the small double clustering pillars with engrailed arches, the Norman Romanesque capitals of boars, griffins, and leaves. Ford
Three-foil or multi-foil arches are characteristic of Islamic architecture and were widely utilized in the Great Mosque of Cordoba. The cloister was designed in the late XIIth or early XIIIth century, thus before the Christian conquest of Cordoba in 1236, but after 1118 when Alphonso I, King of Aragon conquered Zaragoza where the mosque of Aljaferia had multi-foil arches. 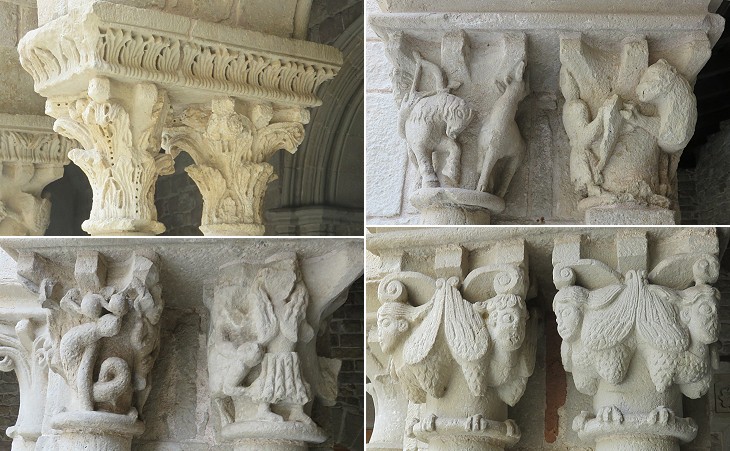 Similar to what can be noticed in other cloisters of the same period in Spain (e.g. at Girona and Tarragona) and elsewhere in Europe (e.g. at Cefalù in Sicily), the decoration of the capitals was very varied: from classical patterns to episodes of the New and the Old Testament, from fantastic creatures to scenes not having a clear religious meaning. 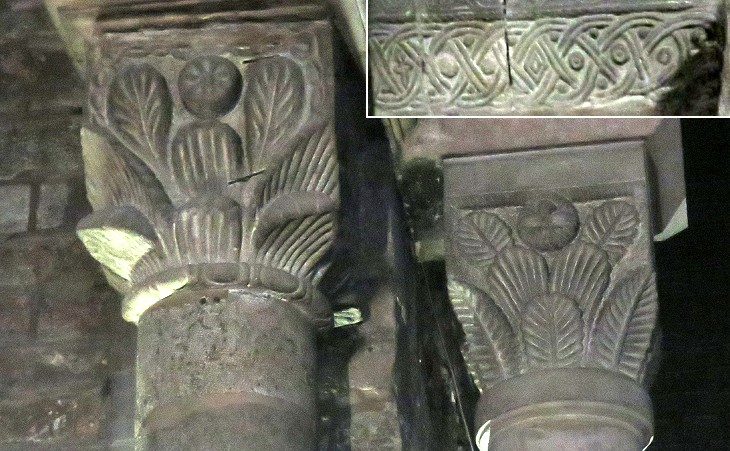 San Pere de las Puellas was built in 980 by Count Sunario after the same style as San Pablo, when the earlier church, erected by Louis le Debonnaire (Louis the Pious, son of Charlemagne), was destroyed by Al-Mansur. Observe the singular capitals in one of which the prickly pear is introduced. Ford
The violent spirit of the Catalonians, and their enthusiastic passion for liberty, have often rendered their country the seat of civil war and bloodshed: insurrections have been more frequent here than in any other part of Europe.
Henry Swinburne - Travels through Spain in the Years 1775 and 1776 in which several monuments of Roman and Moorish architecture are illustrated
The church was greatly damaged by fire during the Tragic Week (25 July - 2 August 1909), a revolt of Barcelona's working class against the Spanish army. Only a few original capitals and decorative patterns were spared by the fire and by the subsequent restoration. The design of the capitals was most likely aimed at copying the ancient lotus leaf capitals, but the result is rather unique and it misled Ford. 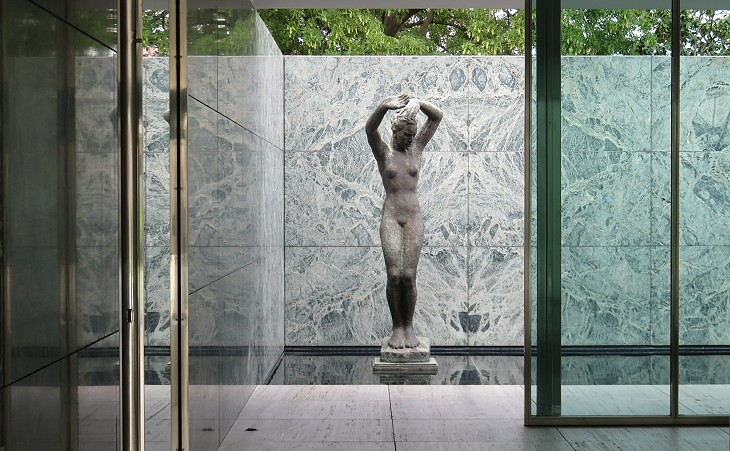 Had Emperor Hadrian visited the 1929 International Fair he would have praised this pavilion, one of the earliest attempts by German architect Mies van der Rohe to develop a new architectural style which refrained from copying the old ones. The Emperor would have praised the use of travertine for the floor and of a green veined marble which resembles cipollino for the walls, in addition to the statue and the low pool which would have reminded him of his villa near Tivoli.

Move to Roman Barcelona within the Walls or to the Museums of Barcelona.