- Mudéjar Zaragoza
(left - Mosaic at Italica; right - decoration at the Alcazar of Seville)

You may wish to see two introductory pages to this section or a page on Roman Zaragoza first. 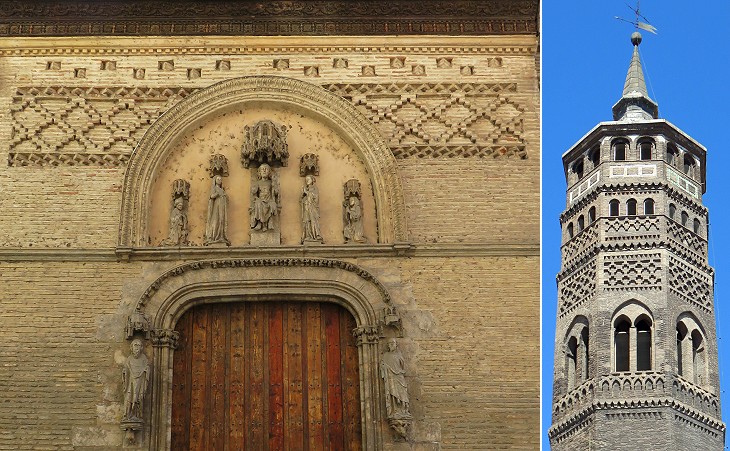 Among the churches, visit San Pablo, a.d. 1259, with its brick octangular tower.
Richard Ford - A Handbook for Travellers in Spain - 1855
The development in the 12th century of Mudéjar art in Aragon resulted from the particular political, social, and cultural conditions that prevailed in Spain after the Reconquista. Geographically, Aragonese Mudéjar art can be found mainly along the Ebro river valley and its southern tributaries in the northeast Iberian Peninsula. From a historical point of view, this artistic genre belongs to a lengthy period that lasted from the 12th to the 17th century. Mudéjar art is an artistic phenomenon that does not belong entirely to the cultures of Western Europe or Islam. Rather, it constitutes (..) a new form of artistic expression. This art, influenced by Islamic tradition, also reflects various contemporary European styles, particularly the Gothic. The inscription in the World Heritage List comprises ten religious and secular monuments in the provinces of Teruel and Zaragoza. (..) In Zaragoza they include: the surviving Mudéjar features of the Aljafería Palace; the tower and parish church of San Pablo; and the apse, (wall of) parroquieta, and cimborio (lantern tower) of la Seo. The Mudéjar architecture of Aragon is, on account of the formal solutions adopted and the techniques and materials of construction employed, a specific and extraordinary legacy. (..) Decorative motifs from a great variety of traditions can be seen in these monuments. (..) Thus, we can identify in these Aragonese monuments the rhombus-shaped mouldings (sebqa), stars, angled and interlaced brick friezes, arrows, lobed and multi-grooved arches, as well as elements of construction characteristic of Islamic art such as alfiz panels, decorated eaves, and lattice work.
From the criteria endorsing the 2001 inclusion of Aragonese Mudéjar in the UNESCO World Heritage List. 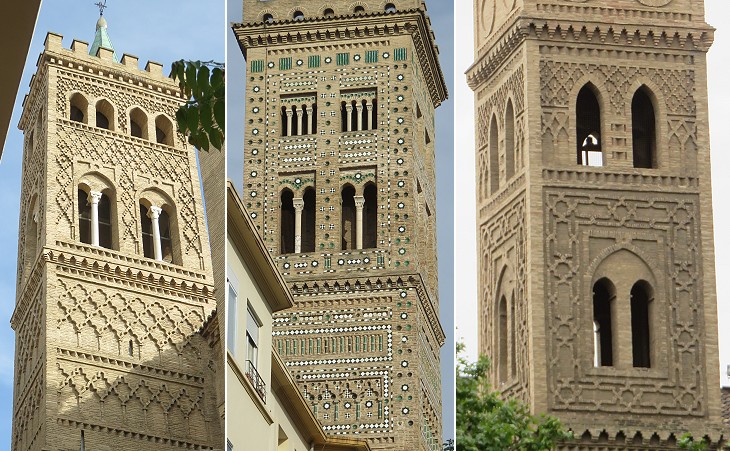 Alphonso I, king of Aragon, made himself master of the town, on the 18th December, 1118, after eight months of siege; he then made it the capital of his kingdom, and the residence of the princes who succeeded him. It remained the capital of Aragon until that country became simply a province of the Spanish monarchy, by the marriage of its king Ferdinand the Catholic, with Isabella, heiress of the kingdoms of Leon and Castile.
Alexandre de Laborde - A View of Spain - translated into English for Longman, Hurst, etc. 1809
At Zaragoza the architect will fully comprehend the substantial style of Aragonese building; and observe the superbly carved soffits, rafters, and external cornices, the rich internal cinque-cento decorations, and the slim church belfry towers, which are usually constructed in brick, angular in form, and ornamented outside with an embroidered tracery. Ford
The decoration of the bell towers of Zaragoza and Teruel is the main reason for the inclusion of Aragonese Mudéjar in the UNESCO List. The bell towers were built in the XIVth century, so a significant time after the Christian Reconquista of Aragon. 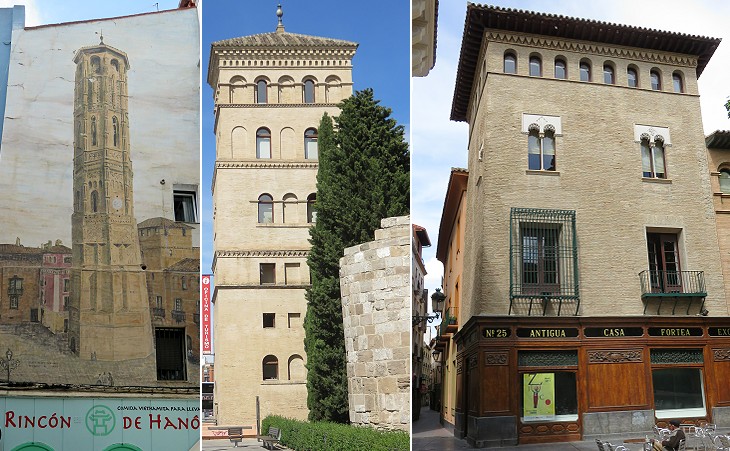 Visit the Torre Nueva, plaza San Felipe. (..) This octangular clock-tower for the city, built in 1504, leans some 9 feet out of the perpendicular, like those of Pisa and Bologna, which is unpleasing, as conveying a feeling of insecurity opposed to the essence of architectural principle. It seems to totter to its fall. (..) Here this want of the perpendicular is not the silly triumph of an architect, but has arisen from the sinking of a faulty foundation; and there has been some talk of taking it down (it was demolished at the end of the XIXth century); it is richly ornamented with brickwork, which at a distance looks Moorish, but it is much coarser both in design and execution. Ford
Torreon de la Zuda is a XVIth century tower which stands on the site of a former Moorish alcazaba (fortress). Torreon de Fortea is a XVth century fortified house. These two towers are considered part of the mudéjar heritage of Zaragoza, but they bear little evidence of that style. 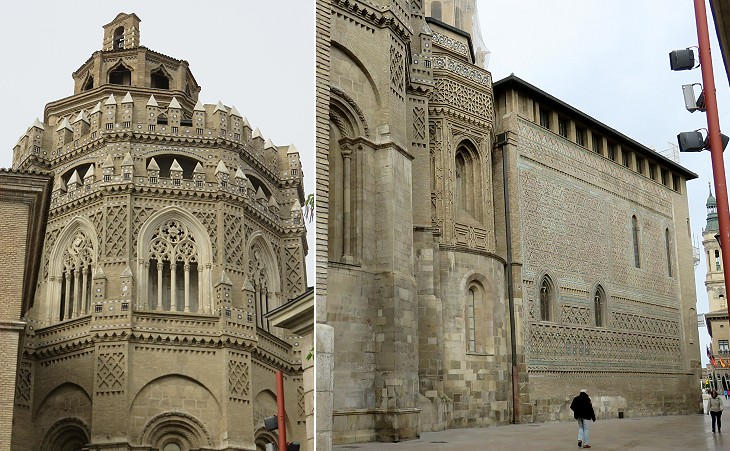 The cathedral is a vast Gothic structure that contains nothing remarkable.
Thomas Nugent - The Grand Tour - Vol. IV - 1749
The chapter reside alternately for six months in each of these cathedrals, which in exterior, interior, and creed, are also complete contrasts: one is an ancient severe church raised to the Saviour; the other a modern theatrical temple. (..) The former edifice is called the Seu (Sedes, See; Cathedra, Cathedral). The style is Gothic, but the exterior of the entrance unfortunately was modernised by Julian Yarza, in the pseudo style of 1683 (..) which contrast with portions of the original arabesque brick-work. Ford 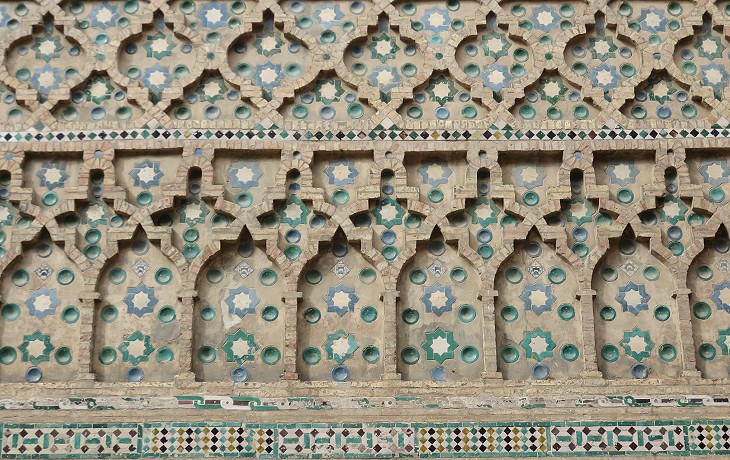 La Seo: detail of the decoration of the wall of Parroquieta (it is very similar to that of San Martin at Teruel)

Mudéjar art, influenced by Islamic tradition, also reflects various contemporary European styles, particularly the Gothic. Present until the early 17th century, it is characterized by an extremely refined and inventive use of brick and glazed tiles in architecture. UNESCO
La Seo was initially built in Romanesque style (you may wish to see the Romanesque churches of Segovia) in the XIIth century on the site of the main mosque of the town. Its mudéjar features are dated 1374 when the building was redesigned in Gothic style. In the early XVIIIth century it was redesigned again, especially the façade on Plaza del Pilar and the bell tower. 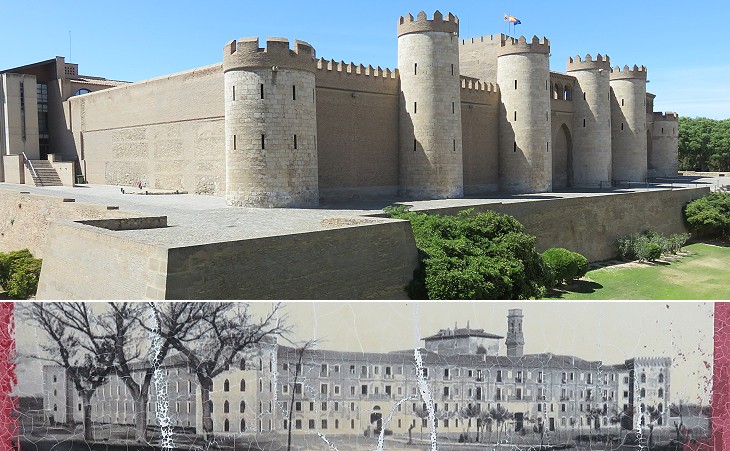 Aljaferia: (above) today; (below) at the beginning of the XXth century

The Saracens, led by Musa, their general, made themselves masters of Zaragoza, and drove the Goths from it in 712, in the name of the Caliph of Damascus. (..) The inhabitants of this town attempted to shake off the yoke of the new empire, the seat of which Abderame had just established at Cordova. They formed a republic in 825, which was however soon overthrown, and the republicans forced to implore the clemency of the Moorish king. At last this town became, in 1017, the capital of a small empire, at the time when the several governors in different parts of Spain, usurped supreme power. The governor of Zaragoza made himself king, and transmitted his crown to his posterity. (..) Aljaferia is a castle without the gates of the city of Zaragoza, on the road to New Castile; formerly it was successively the palace of the Moorish kings, and, after their expulsion, the residence of the kings of Aragon. Laborde
Suchet (a French general) having first damaged the palace with his bombs in 1808, used it as a barrack; afterwards it became a military hospital, and was degraded into a prison during the civil wars, hence its present deplorable condition. Ford
Aljaferia is a corruption of Qasr al-Ja'fariya (Palace of Abu Jaffar Al-Muqtadir, King of Zaragoza). The current aspect of the building is the result of a lengthy "reconstruction in style" which was superintended by architect Francesco Iniguez Almech. It began in 1947 and it was completed in 1982. The round towers bring to mind those of Qasr al-Hayr al-Sharqi, a countryside residence of the Caliphs of Damascus. 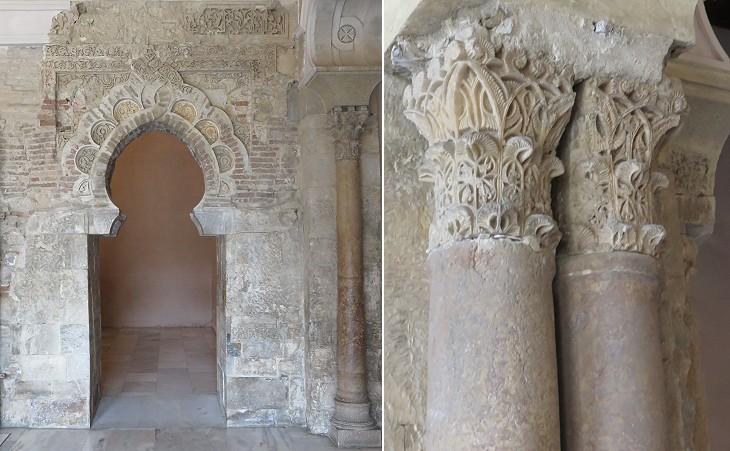 Aljaferia: architectural elements in the rooms in the northern part of the building

In the case of the Aljafería Palace of Zaragoza, the use of part of the building for other functions did have an impact on large sections of the structure. Fortunately, the Mudéjar section was the part that was least affected. Due to the respectful restoration work carried out at the end of the last century, the Mudéjar elements have survived intact. UNESCO
Aljaferia was built in ca 1065 by one of the Moorish kings of Zaragoza and some of the rooms, once deprived of later additions have revealed parts of the original building. Their architectural features are pure Islamic ones rather than mudéjar, because they were designed prior to the Christian conquest. 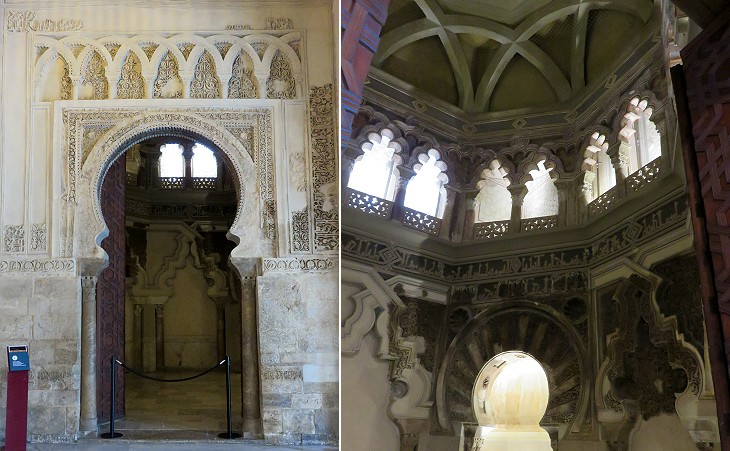 Aljaferia: Mosque: (left) portal with an alfiz panel, i.e. a rectangular panel which encloses the outward side of an arch; (right) interior

The Moorish kings had a small private mosque inside the palace which was turned into a Christian chapel. The entrance brings to mind the gates of the Great Mosque of Cordoba and the interior the mihrab of that mosque. The similarities were perhaps emphasized by the XXth century restoration. The image used as background for this page shows a fragment of a painted wood panel in the Museum of Aljaferia. 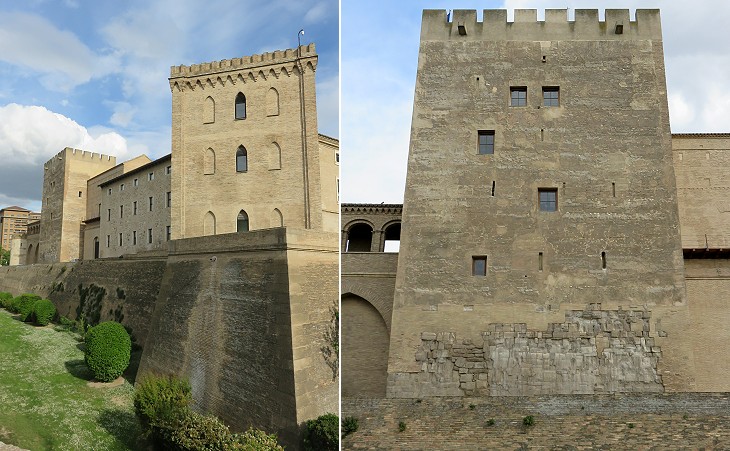 In the 1590s the fortifications of Aljaferia were upgraded to the requirements of cannon warfare by Tiburzio Spannocchi, an Italian military architect. He did not modify Torre del Trovador, a tower which pre-existed the construction of Aljaferia and which resembles those of Granada (although it was built at a much earlier time). It is named after a drama by Antonio Garcia Gutierrez which provided the plot for Il Trovatore, an opera by Giuseppe Verdi, the last act of which is set in this tower. 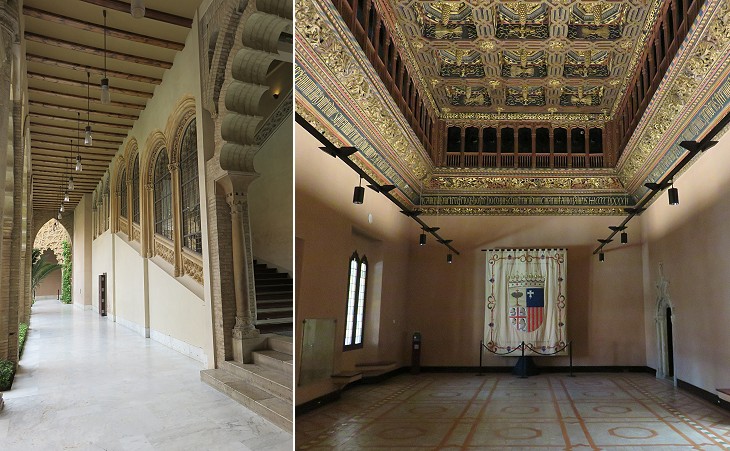 Observe the once splendid staircase, adorned with the badges of Ferdinand and Isabella. One room is called el Salon de Santa Isabel, because the sainted queen of Hungary was born in it in 1271: above hangs, luckily out of reach, and in contrast with present decay, the glorious blue and gold artesonado roof with stalactical ornaments; notice an elegant gallery, and a rich cornice with festoons of grape leaves; a Gothic inscription bears the memorable date 1492, which was that of the conquest of Granada, and of the discovery of the new world: and the first gold brought from it was employed by Ferdinand in gilding this ceiling (similar to the ceiling of S. Maria Maggiore in Rome). Ford 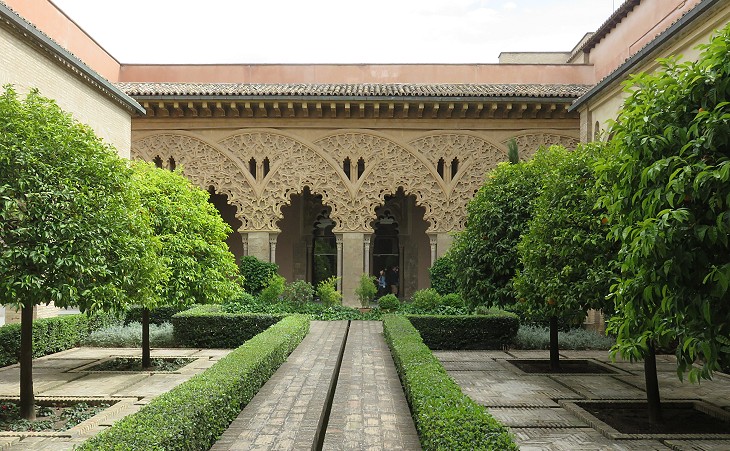