On September 9, 622 AD Prophet Muhammad escaped from Mecca to Medina to avoid being assassinated; that event (Hijra, migration in Arabic) is the starting day of the Islamic calendar; just a century after that apparently minor event, the Umayyad Caliphs, the heirs of Muhammad, controlled one of the largest empires of world history which spanned from Spain to India. 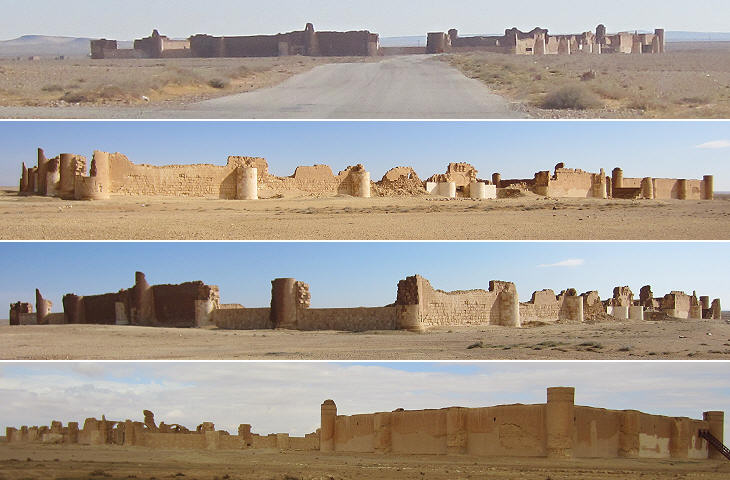 Caliph Hisham ibn Abd al-Malik came to power in 724 and he ruled over his vast empire until his death in 743; during his relatively long reign he managed to quell several local revolts and in general he strengthened the control of the central government; in 732 however his armies were repelled by Charles Martel at the Battle of Tours (or Poitiers) in France, which marked a turning point in the Arab invasion of Europe.
According to chronicles Caliph Hisham ibn Abd al-Malik was a very parsimonious man; he did however associate his name with the construction of two luxury residences in the Syrian Desert which are distinguished by their comparative positions: Qasr al-Hayr al-Gharbi (Western Castle) between Damascus, the capital of the Umayyad Caliphate, and Palmyra and Qasr al-Hayr al-Sharqi (Eastern Castle), some sixty miles east of Palmyra. The remaining evidence of the Western Castle is very limited after its main portal was relocated to Damascus where it was reconstructed as the grand entrance to the National Museum. The Eastern Castle has been preserved and in part reconstructed in situ; the first view of its ruins is a veritable mirage as they suddenly appear off a totally barren environment. 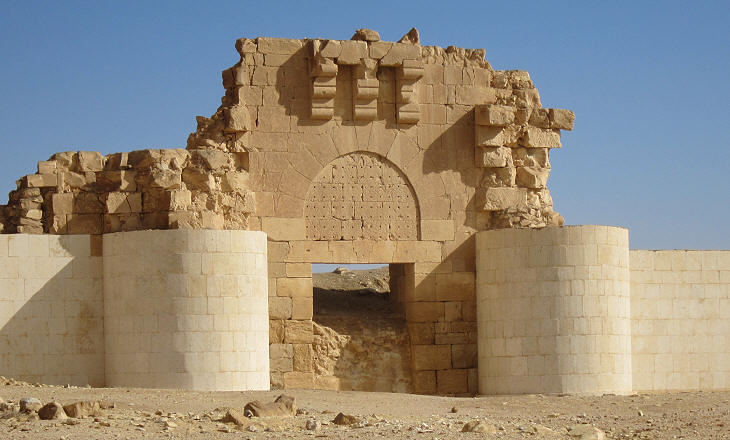 Southern Gate of the palace

Two large complexes known as the palace and the khan were built at the centre of a walled enclosure of approximately seven square miles; the area was irrigated, not for farming purposes, but for breeding game which the caliph and his guests hunted (Qasr al Hayr = Castle of the Game Park); water was carried from a distance of twenty miles. In Caliph Hisham's mind the meadows and woods of this large area were probably the realization of those which decorated the Umayyad Mosque of Damascus; only minor stretches of the surrounding walls remain. The Umayyads built also some small castles/palaces in the desert east of Amman in Jordan. 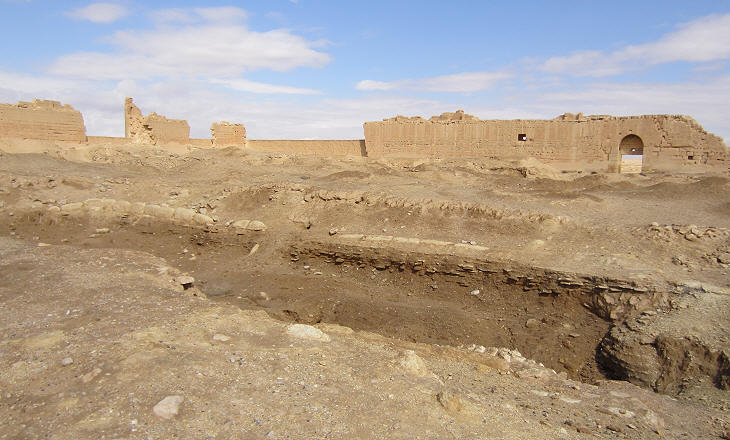 Central area of the courtyard with evidence of a pool

The palace had the square shape of a Roman castrum (fort) with one gate on each side and two streets dividing the complex into four sections; this design was known to the Arabs from several forts the Romans built in the Syrian Desert to control nomadic Bedouin tribes and to protect trade routes to the Persian Gulf. 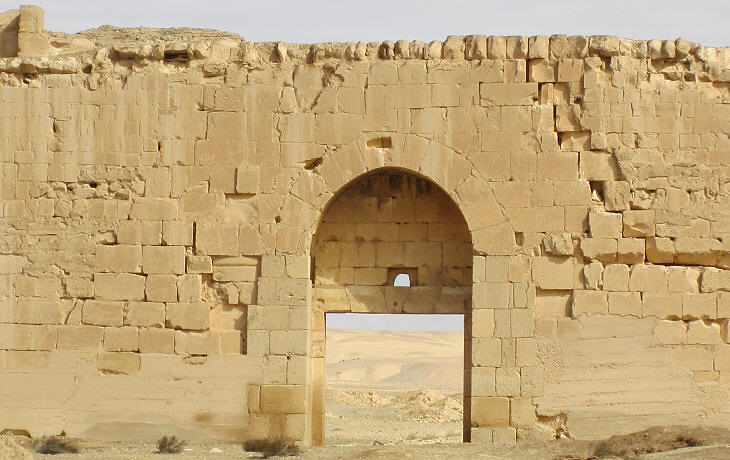 Northern Gate (from within)

The walls and towers of the palace did not have an actual defensive purpose, as Caliph Hisham had no reason to fear an attack by an enemy army; also the existence of four gates did not correspond to an equivalent number of roads departing from the palace. 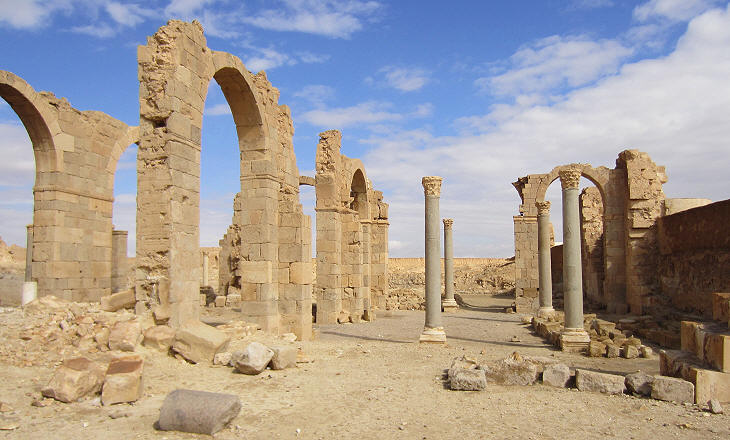 Mosque in the south-eastern corner of the palace

Archaeologists have unearthed and partially reconstructed a mosque which occupied a corner of the palace; its design is similar to that of a basilica with three naves; the granite columns and marble capitals which decorate the mosque were taken from ancient buildings, possibly from baths built by Emperor Diocletian at Palmyra or from more distant Apamea. Courtyard to the side of the mosque

Apart from the central wide courtyard with the pool seven other courtyards have been identified in the palace enclosure; the rooms which surrounded them were rather small. 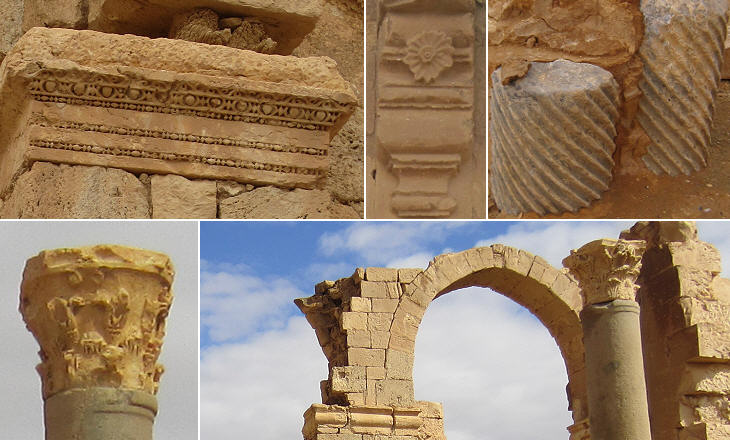 In 750 the Umayyads were replaced by the Abbasids as Islam Caliphs; the latter resided in Baghdad, but it seems that they continued to utilize the palace and that after them the Ayyubid rulers of Syria did the same; the final abandonment of the site is thought to have coincided with the Mongol invasion of the region in the XIIIth century. 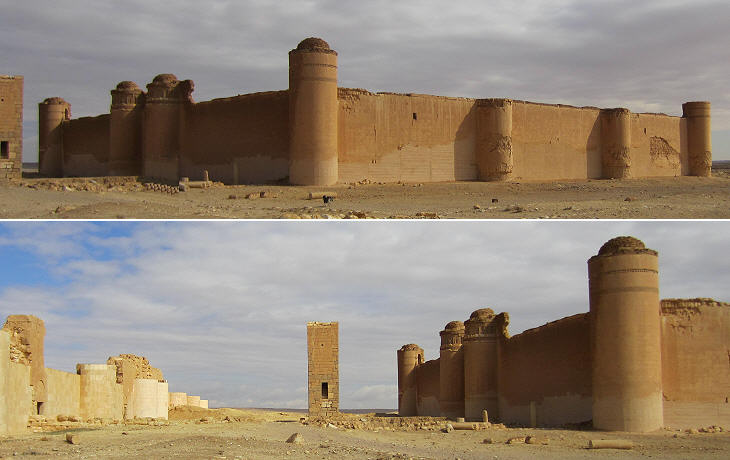 (above) The khan; (below) minaret between the palace and the khan

The second (smaller) complex is known as the khan because its design is similar to that of a caravanserai with a central courtyard surrounded by two storey-buildings with warehouses and stables below and rooms above.
A truncated minaret stands between the two complexes; its size, location and construction technique have led archaeologists to believe that it was built many centuries later than the two complexes, when a small village was nested inside the khan. (left) Gate of the khan facing the palace; (right) detail of a niche

The side of the khan facing the palace has an imposing gate flanked by two domed circular towers; this gate is very similar to that which has been reconstructed in Damascus; the presence of two decorative niches at the sides of the entrance is a reminiscence of ancient buildings where such niches housed statues.
The construction technique is a blend of Syrian (stone layers) and Mesopotamian (bricks and mud covering) practices. 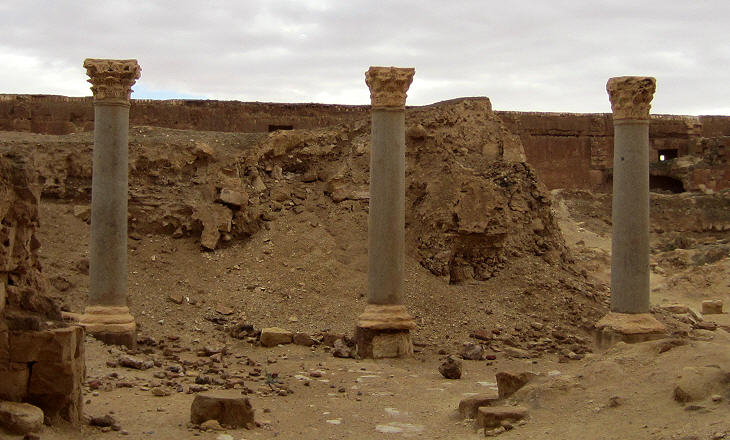 Interior of the khan

The use of ancient columns and capitals in the khan indicates that it was not meant to house ordinary trade caravans, but retinues of vassals visiting the Caliph. 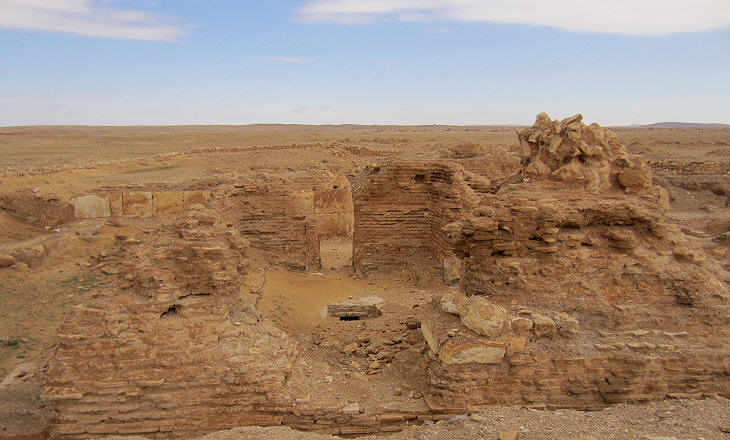 Ruins of a bath near the khan

A third building has been unearthed seventy yards from the north-western corner of the khan; it housed baths which were designed following the scheme of Roman baths with halls at different temperatures, two pools, changing rooms and latrines.
The fact that the palace, the khan and the baths were not unified into a single complex, but stood separate, although being so close to each other, is perhaps due to the desire of Caliph Hisham to give actual form to the various imaginary buildings depicted in the mosaics of the Great Mosque of Damascus. You may wish to see Anjar, an Umayyad town in Lebanon.