- Romanesque Segovia
(left - Mosaic at Italica; right - decoration at the Alcazar of Seville)

You may wish to see two introductory pages to this section or a page on Roman and Mudéjar Segovia first. San Millan was built outside the town in the early XIIth century, shortly after the Christian conquest of Segovia in 1088.
Saint Emilian of Cogolla was a Spanish hermit of the VIth century who was famous for his holiness. The reason why one of the first and largest churches of Segovia was dedicated to him lies in his miraculous intervention in a 939 battle between a Christian army and the Moors of Caliph Abd ar-Rahman III (similar to what St. James the Apostle did in a previous battle).
The stout bell tower is dated before the church. It shows features of Moorish architecture, whereas the four apses of the church reflect the new Romanesque style. "Romanesque" is a term coined in the XIXth century to indicate the architectural style which prevailed in Western Europe in the XIth and XIIth centuries. The name means "from Rome" in the sense that Romanesque buildings are large and solid and adopt Roman construction techniques based on round arches and vaults. This style however was not developed after monuments of ancient Rome, but rather after VIth century churches (e.g. San Vitale at Ravenna and Sts. Sergius and Bacchus at Constantinople) and after the Palatine Chapel built by Charlemagne at Aachen in 792-805. They all are characterized by a large use of round arches and vaults. 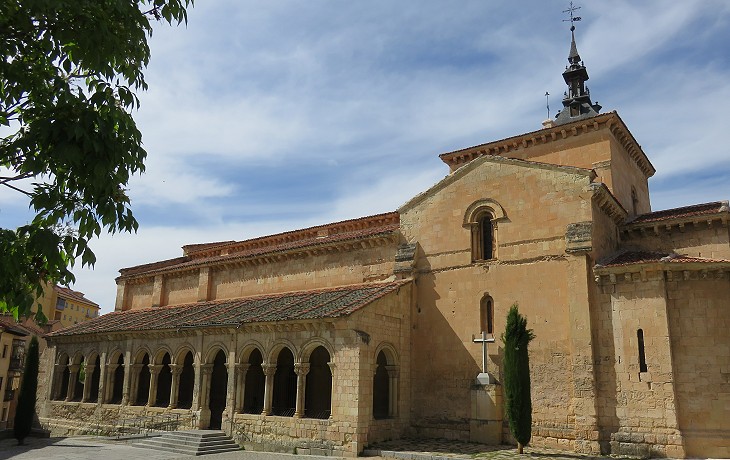 Segovia is a museum to the antiquarian ecclesiologist. (..) It is very cold, being above 3300 feet above the sea.
Richard Ford - A Handbook for Travellers in Spain - 1855
Byzantine churches were characterized by a narthex (as at St. Saviour in Chora at Constantinople), i.e. a portico or a more closed hall at the front of the church from where catechumens watched ceremonies. The Romanesque churches of Segovia have large porticoes which were not reserved to catechumens, but allowed more people to attend special ceremonies. They had also a lay function, because, similar to those of a Roman building (e.g. the Great Palaestra of Pompeii) they sheltered people from the rather harsh weather conditions which can occur at Segovia during its cold winters. 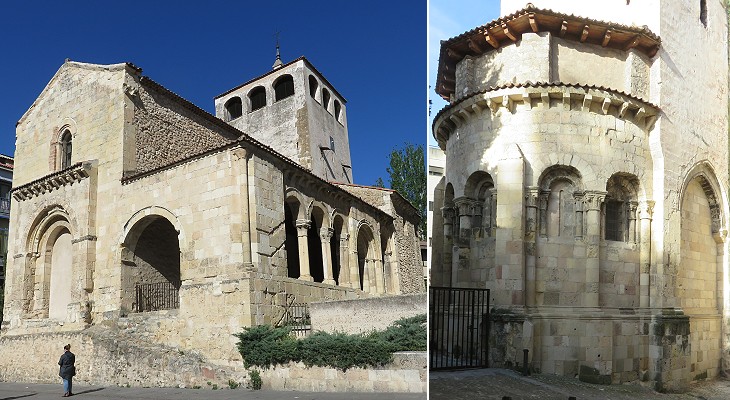 This church was built at approximately at the same time as San Millan and at a short distance from it. It has an imposing tower and a wide side portico.
The city's prosperity depended on its staple, wool, but then the flocks were eaten up by the wolf, and now only a few poor cloth manufactories languish in the suburb. Ford
It is likely that the two churches with their porticoes catered for wool merchants. 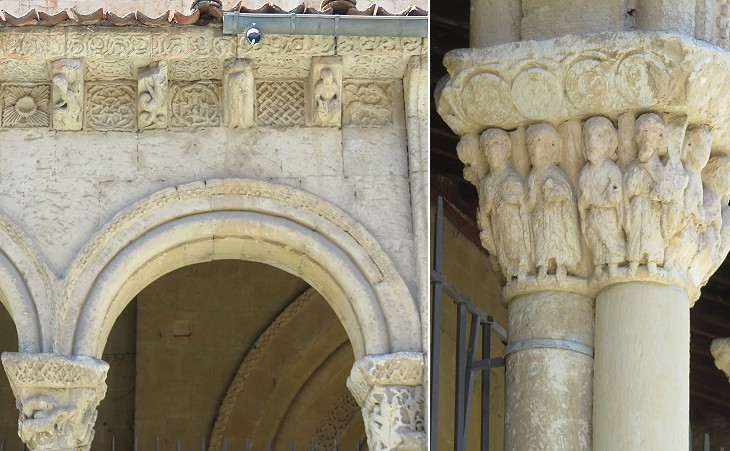 The Christian Reconquista of Spain was characterized by a great religious fervour. The Visigoths converted to the Catholic creed in 589, but they did not adopt the Roman liturgy. The Visigothic or Mozarabic rite continued to be used in the areas under Muslim rule. The kings and the nobility of the small states in the north of the country adopted the Roman liturgy and sought advice on how to best consolidate Christian values in their possessions and in territories conquered from the Moors. Many Benedictine monasteries were established in northern Spain. The Benedictines recommended to use sculptures and paintings to illustrate episodes of the New and Old Testament and of the lives of saints in the decoration of churches, in line with the traditional position of the Popes. Per se it was not something new for Spain (see Visigothic reliefs at Toledo), but the scale of the effort was unprecedented. At Segovia this approach was especially followed in the sculptural decoration of the porticoes, although some geometric reliefs at San Millan show the influence of Islamic art. 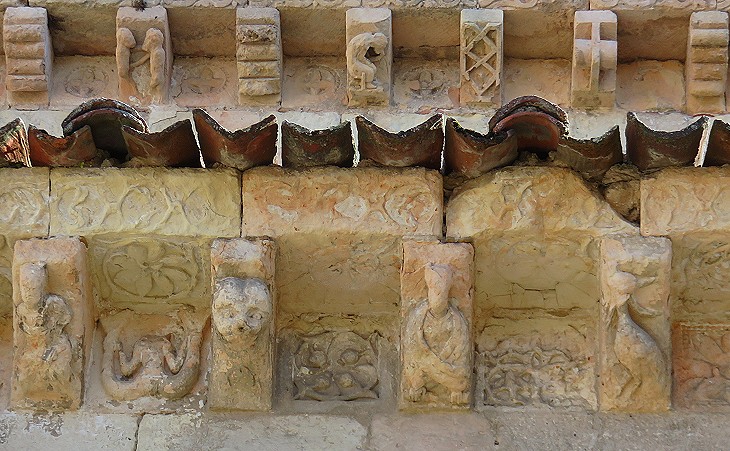 The sculptures at San Millan and other Romanesque churches of Segovia were not limited to religious depictions, but covered a number of other subjects, from mythological creatures to zodiacal signs and to small puzzling scenes. 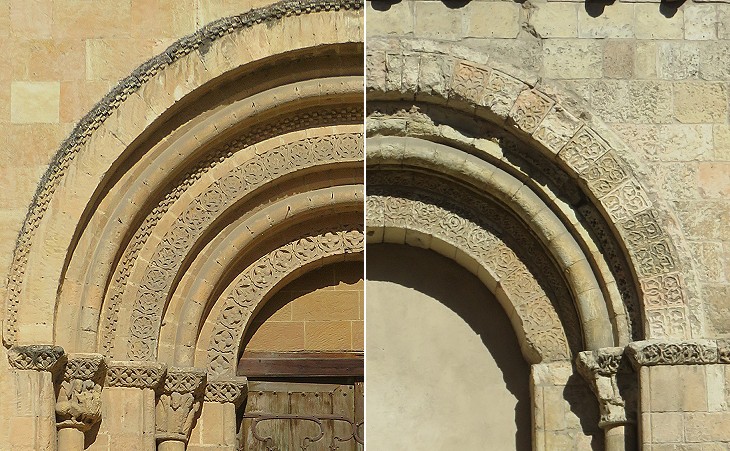 The use of rounded arches is the feature of the Romanesque style which most derives from the construction techniques of the ancient Romans. The nesting of a series of arches is instead something typically medieval. The portal had a religious significance because it highlighted the entrance to the House of God. Eventually portals became very deep and were decorated with statues of saints, but in these two churches their decoration is still rather plain and their number of arches is limited. 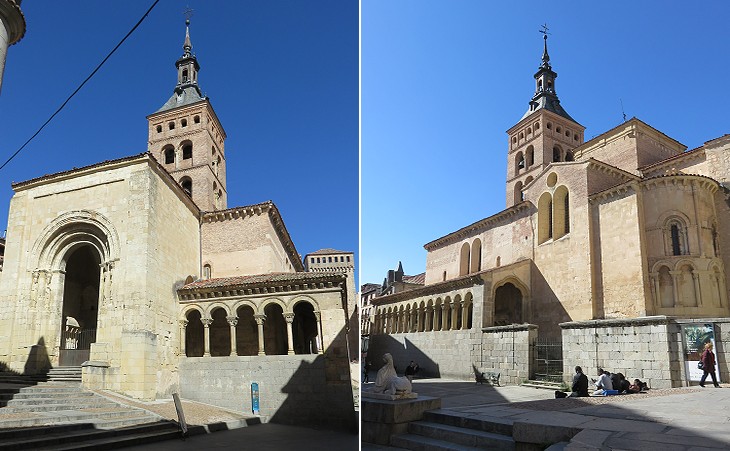 This large early XIIth century church stands in the old town and it is surrounded by porticoes on three sides with a total of some forty columns. It has thick walls and only a few windows to prevent the building collapsing. The bell tower resembles that at San Millan (the spire is a later addition).
Saint Martin was particularly venerated in France where his shrine at Tours was visited by many pilgrims. The Romanesque style first spread from Southern France to Barcelona and Catalonia and then from there to the other parts of Northern Spain. So did the worship of St. Martin who was regarded as a military saint and thus particularly able to protect people who were constantly at war to defend their faith. 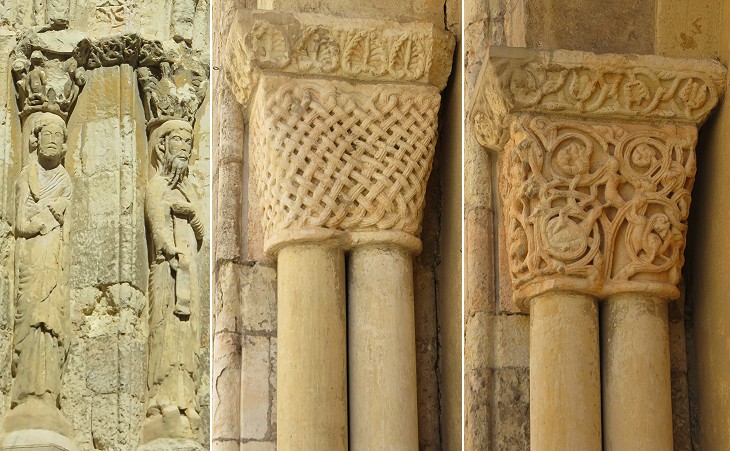 San Martin: (left) detail of the portal; (centre/right) capitals of the porticoes (one of them is based on Byzantine patterns); the image used as background for this page shows a capital depicting The Presentation to the Temple

The portal of San Martin is curious. Ford
We know that ancient and medieval sculptures were brightly painted. Traces of paint were still visible on the portal of this church at the beginning of the XXth century. In Spain the practice of painting wooden statues thrived (see the retablo in Capilla Mayor of the Cathedral of Toledo) and remains alive today. 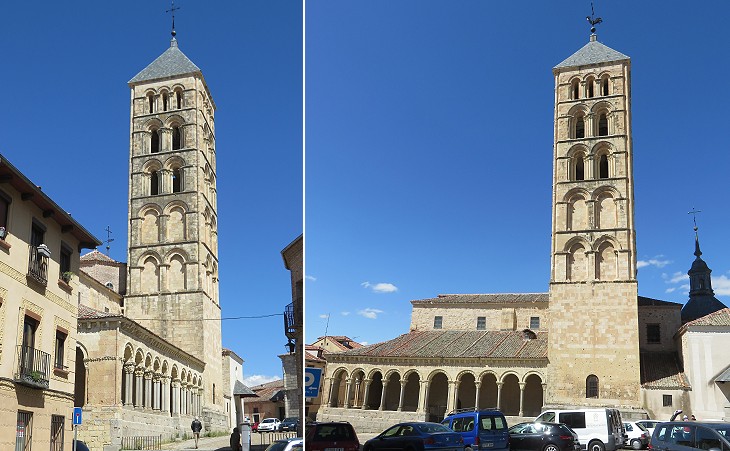 Observe also the tower of San Esteban, with the Saxon arches, capacious capitals, and open "corredor" (portico). Ford
In 1212 a joint army of the Christian kingdoms defeated that of the Almohad rulers of Al-Andalus (Southern Spain). The kings of Castile conquered Cordoba in 1236 and Seville in 1248, thus Segovia was no longer under threat of a Muslim attack. The bell tower of San Esteban was built in the XIIIth century and it does not have the defensive features of those of the previous century, it shows instead the desire of the inhabitants of the town to embellish it with a purely decorative monument which would be seen from afar. 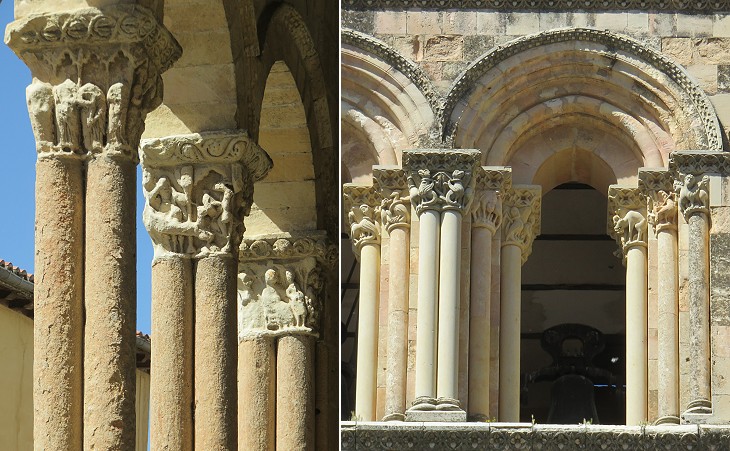 Columns and reliefs of the portico are in much worse condition than those of the bell tower. This because the latter was greatly damaged by fire in 1896 and it was rebuilt in the early XXth century in the style of the old one and some additions/changes made after the XIIIth century were removed.
The worn out capitals of the portico were decorated with a variety of subjects. The sculptors of the time were highly skilled in working with curved surfaces as one can see at Sainte-Marie-des-Dames at Saintes in France and in the XIIth century cloisters of Cefalù and Monreale in Sicily. 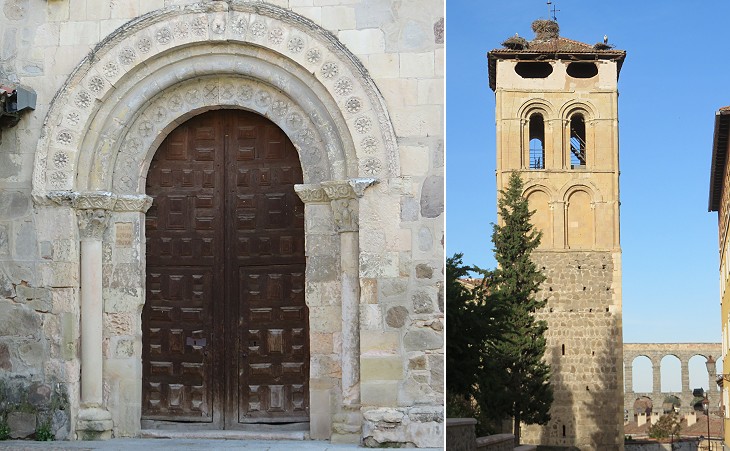 Iglesia de San Justo y Pastor near the Roman aqueduct on the hill opposite the town; it is also known as Santos Ninos (Holy Children) because Justo and Pastor were beheaded at the age of seven during the persecution by Emperor Diocletian (see the church dedicated to them near Saint-Bertrand-de-Comminges in the French Pyrenees): (left) portal; (right) bell tower with stork nests

The economy of Segovia declined after the XVIth century so a number of Romanesque churches retained their original aspect although in many cases the interior was redesigned. 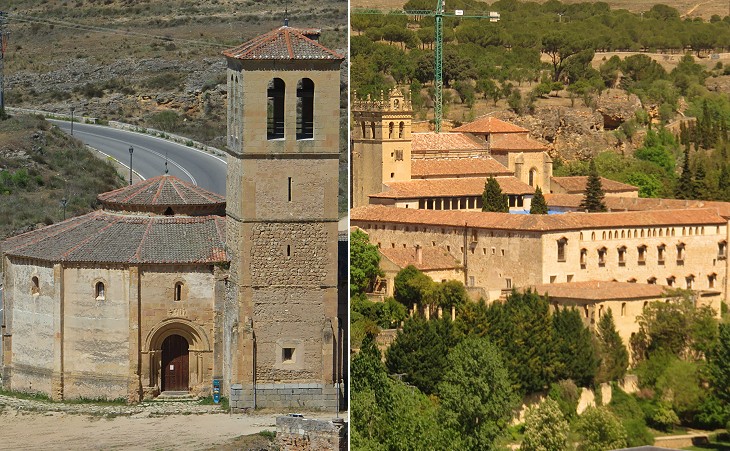 Adjoining on a slope is la Vera Cruz, a very curious church, built in 1204 by the Templars, but now going to ruin: observe the angular forms and the square tower. (..) Higher up is the Parral once wealthy Jeronomite convent, which nestles under a barren rock amid vines and gardens. (..) It was built in 1494, by Juan Gallego. Ford
El Parral houses the only existing male monastery of the Hieronymite Order (see the 1433 gravestone of Lope da Olmedo, the Prior of the Order in Rome). 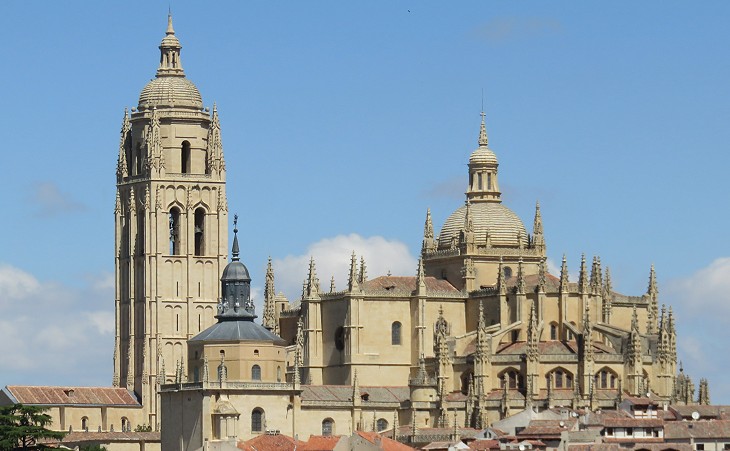 Cathedral seen from the south

The cathedral is an old Gothic building, with a high square tower, but contains nothing worth notice, except the old clothes of some Jews, who had the misfortune to be burnt by order of the most holy Inquisition in the last century.
Richard Twiss - Travels through Portugal and Spain, in 1772-1773
Segovia is the seat of a bishop, the suffragan of the archbishop of Toledo. (..) The Cathedral church presents a mixture of Gothic and and Grecian architecture; though constructed in the sixteenth century, its ornaments belong almost exclusively to the former character.
Alexandre de Laborde - A View of Spain - translated into English for Longman, Hurst, etc. 1809
The older cathedral was almost destroyed by the reformers of Comuneros (the Revolt of the Comuneros was an uprising against the rule of Emperor Charles V in Castile) in May 1520, who commenced business by pulling down churches, hanging the authorities, plundering the rich, and by burning houses for the public good. The new building was begun in 1525 by Juan Gil de Ontanon and his son Rodrigo. Ford
The Cathedral was consecrated in 1228 and it was designed in Romanesque style, but we do not have images of its aspect before its destruction and contemporary chronicles focus on the relics it housed and the saints who were worshipped on its altars, rather than on its architectural features. 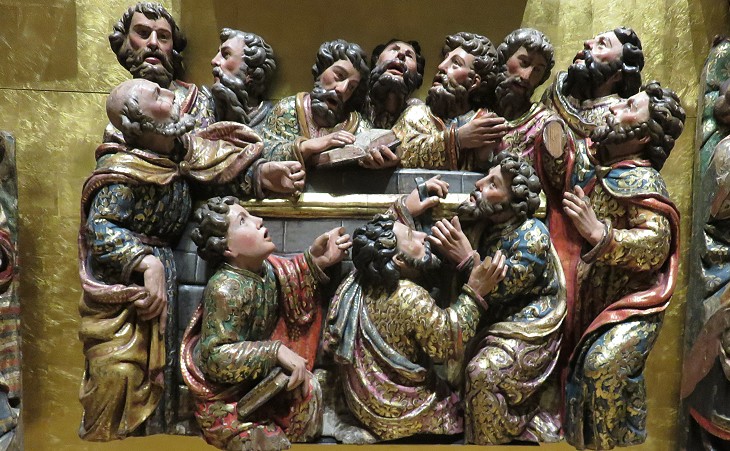 Museum of Segovia: a detail of Retablo de la Vida de Jesus, a beautiful example of XVIth century Spanish painted wood sculpture from Iglesia de Santa Columba, a medieval church which stood at Plaza de Azoguejo and which was demolished with other buildings in 1931 to improve the view of the Roman aqueduct

Return to Roman and Mudéjar Segovia.