- Medieval Saint-Bertrand-de-Comminges
(relief at Glanum and quotation from Pliny: "It is More Similar to Italy than to a Province")

You may wish to see an introductory page to this section or a page on Lugdunum Convenarum, the Roman town first. 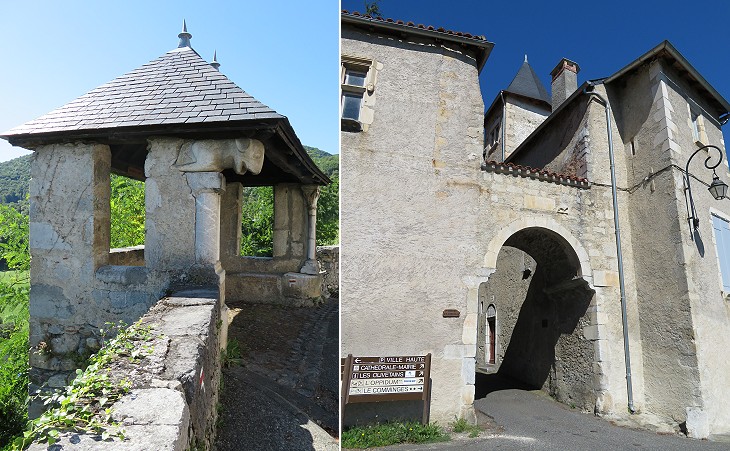 (left) Bastion; (right) Porte Cabirole with inscription with the name of the Roman town

This town takes its name from St. Bertrand its bishop, who in 1100 built it near the ruins of Lion de Comminges (Lugdunum Convenarum), an ancient town destroyed in 585, by Gonran, king of Burgundy, for having received within its walls an impostor that pretended to be of the blood royal.
Henry Swinburne - Travels through Spain in the Years 1775 and 1776 to which is added a Journey from Bayonne to Marseille.
The Roman town was destroyed in 585, but the part on the hill was not totally abandoned and some bishops of Lugdunum Convenarum are recorded from time to time in the following centuries. The turning point for the resurgence of the settlement was the appointment of Bishop Bertrand, cousin of William IV and Raymond IV, Counts of Toulouse, in 1083. 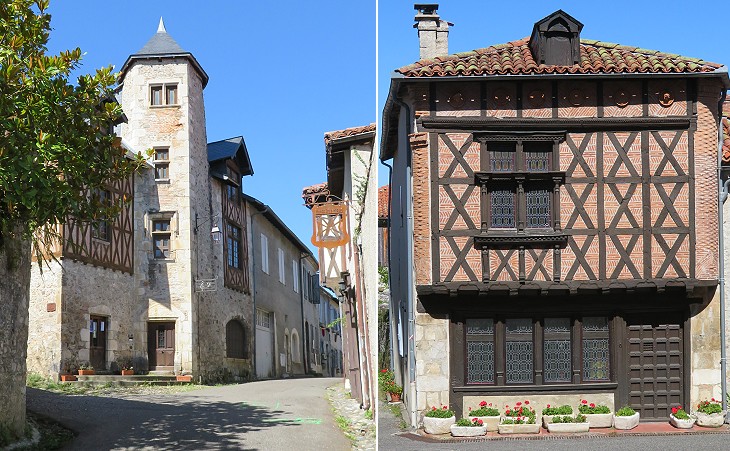 Its church was once a cathedral and the town itself (now deserted: 847 inhabitants) was the capital of a comte and a bishop's see. Many of the houses belonged to the canons and chapter.
John Murray III - Hand-book for Travellers in France - 1843
Bertrand was bishop of the town for forty years and with the support of his powerful cousins he began the construction of the Cathedral and of adjoining facilities for the canons and the administration of the diocese. He was regarded as a holy man who performed many miracles; he was canonized in 1218 and the town was renamed after him, Comminges being a corruption of Convenae. 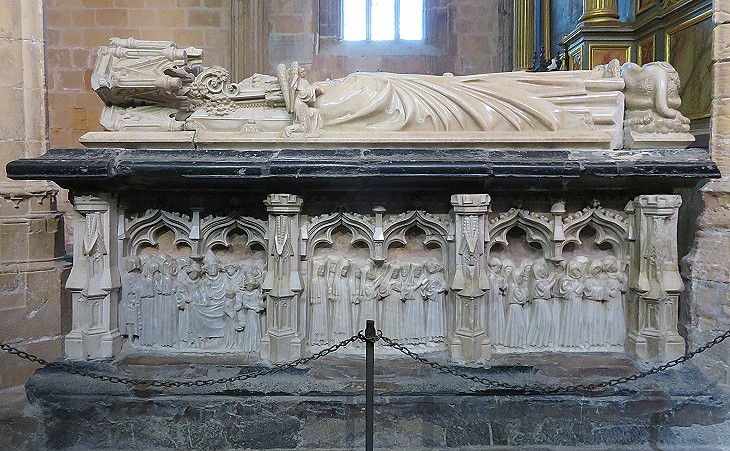 A monument of a bishop date 1351 in white marble deserves notice. Murray
The importance of the diocese grew in 1305 when Bertrand de Got, a former Bishop of Saint-Bertrand-de-Comminges was elected Pope Clement V. He promoted the enlargement of the Cathedral which was completed by his relative Hugues de Castillon, Bishop in 1336-1352. The diocese, which included a valley south of the Pyrenees, acquired a great prestige and it was assigned to eminent members of the Papal Court, some of whom became cardinals and were usually cadets of French noble families. 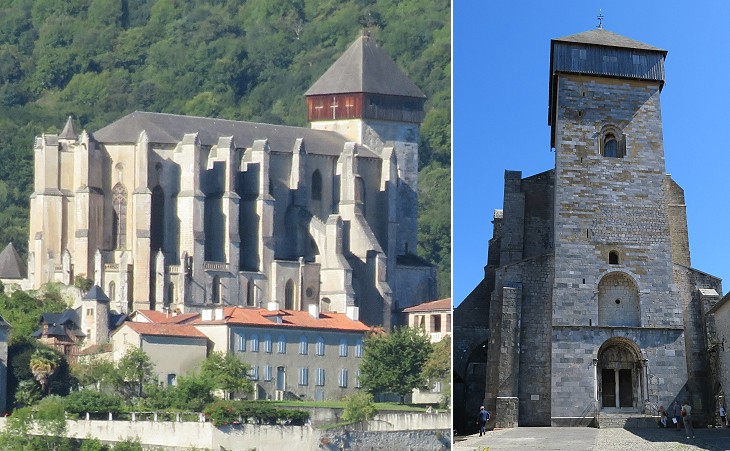 The cathedral of Albi, begun about the middle of the 14th century, is a vast pile of brown brick, with bastions for buttresses, externally more like a fortress than a church. (..) The plan is peculiar: it consists really of one vast nave from end to end, vaulted, and with chapels on each side in two storeys, between the great buttresses. (..) There is a similar arrangement at the interesting church of S. Bertrand de Comminges, on the foot-hills of the Pyrenees. (..) It is a single aisled abbey church ending in a simple apse.
Thomas Graham Jackson - Gothic Architecture in France, England, and Italy - 1915 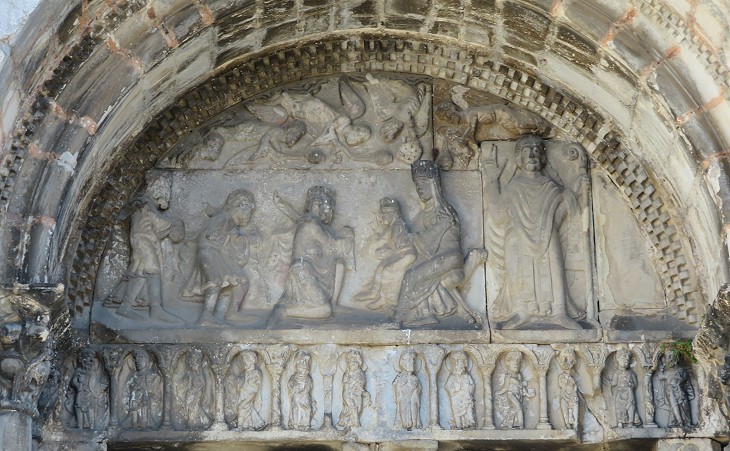 Cathedral: detail of the portal

The decoration of the tympanum of the portal is made up of a group of reliefs depicting St. Bertrand (this section might have been added at a later time) and the Adoration of the Magi above the Twelve Apostles; this technique was used also for the tympanum of Porte Miègeville at the Basilica of Saint-Sernin in Toulouse. The Cathedral was visited by pilgrims who wanted to pray at the tomb of St. Bertrand; some of them might have been on their route to Santiago de Compostela, although the main passage across the Pyrenees was situated further west. The image used as background for this page shows a modern signboard of the pedestrian route to Compostela which is 1078 km away. 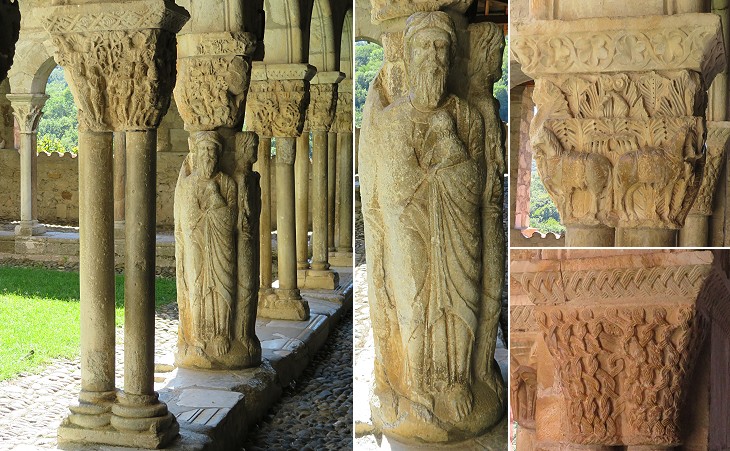 The 12th century cloister attached to the church is in a sad state of decay, many of the details being quite unrecognizable. The capitals which are large and disproportioned are carved elaborately with scrolls and figures, and rest on coupled columns, except that in one case the pier is composed of the four evangelists placed back to back against a central shaft, each holding in his arms the apocalyptic beast which is his emblem.
Thomas Graham Jackson - Byzantine and Romanesque Architecture - 1913
The cloister, quite unusually, has a side open towards the countryside. 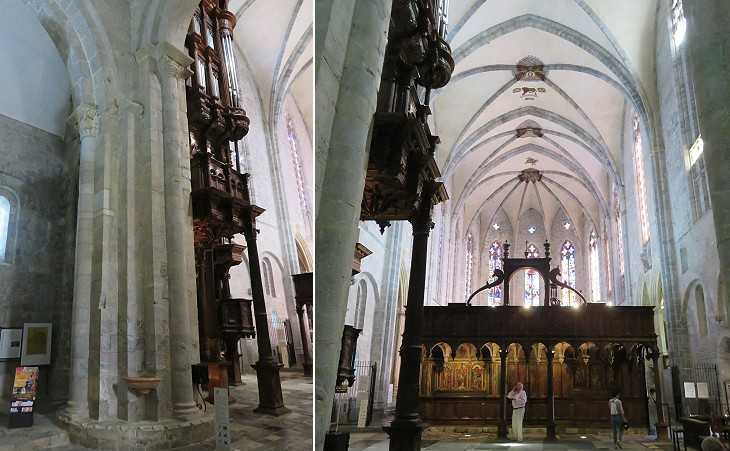 The façade and the narthex retain their Romanesque aspect (late XIth/early XIIth cent.) whereas a new Gothic nave replaced the other parts of the old church. The original impact on the viewer of the Gothic nave is diminished by the addition of a large Renaissance wooden choir, by the closure of the windows of the lower row and by the almost total loss of the stained glass. 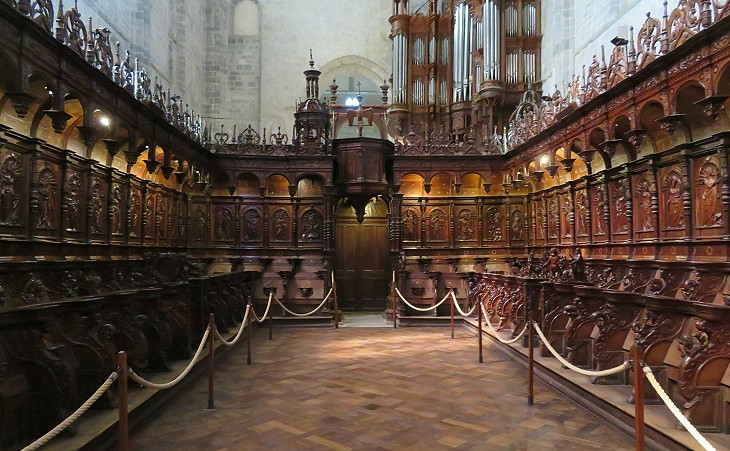 The choir and organ are ornamented with wood carvings of very remarkable excellence executed apparently in the 16th or 17th centuries. Murray
Relationships between the Bishop and the canons of the Cathedral were not always smooth. Some bishops would have preferred to reside at Saint-Gaudens, north of Saint-Bertrand-de-Comminges, where the valley of the River Garonne is wider and Toulouse and other important towns are more easily reachable, but the move was opposed by the canons. Their importance was such that in 1525-1535 a large part of the nave was separated from the rest of the church by a wooden screen, so that they could gather there and perform their duties without being disturbed by pilgrims and common believers. Cathedral: details of the Renaissance Choir and of its stalls and portrait of Francis I, King of France, by Jean Clouet (ca 1530) at the Louvre

The overall design of the choir shows the influence of Italian Renaissance, but it brings to mind also the choir of the Cathedral of Toledo. Some of the carvings show a gallery of portraits in the costumes of France at the time of King Francis I.
In 1586 the Huguenots sacked Saint-Bertrand-de-Comminges; they massacred many of the canons, smashed some statues and stole the silver and gold reliquaries, but they did not damage the choir.
The diocese was suppressed in 1793 by the Republican government and the Episcopal Palace which adjoined the Cathedral was destroyed. In 1801 the decision was confirmed by Pope Pius VII; the population of Saint-Bertrand-de-Comminges dwindled to a few hundreds. The town was visited in 1845 by Prosper Merimée (1803-1870), a French writer who at the time was Inspector-General of Historical Monuments, who took the first steps for the conservation of the former Cathedral. At the foot of the hill the little church of S. Just has a fine Romanesque doorway with figures of saints in the jambs serving as supports to the archway. Jackson
The church stands isolated in the valley, surrounded by a small graveyard on the site of a Roman necropolis. It was built with materials taken from buildings of Lugdunum Convenarum. Some ancient decorative reliefs were placed here and there on the walls of the church. It was consecrated in the year 1200. 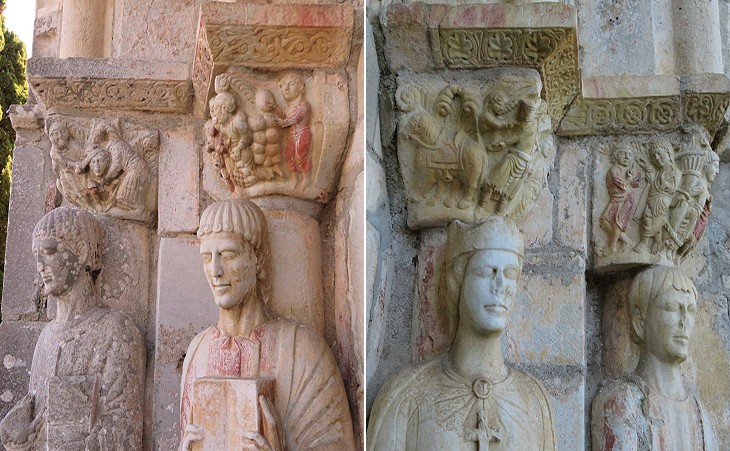 The church was dedicated to St. Stephen and to Sts. Justus and Pastor, two young Spanish martyrs (see Iglesia de San Justo y Pastor, a Romanesque church at Segovia). The presence of St. Helena in the portal is due to the fact that the church houses a fragment of the True Cross she brought from Jerusalem. The capitals, which retain traces of paint, show episodes of the saints' life in a traditional medieval manner, but the faces of the saints have the composure of an ancient statue; that of St. Pastor in particular resembles the portrait of a young emperor. 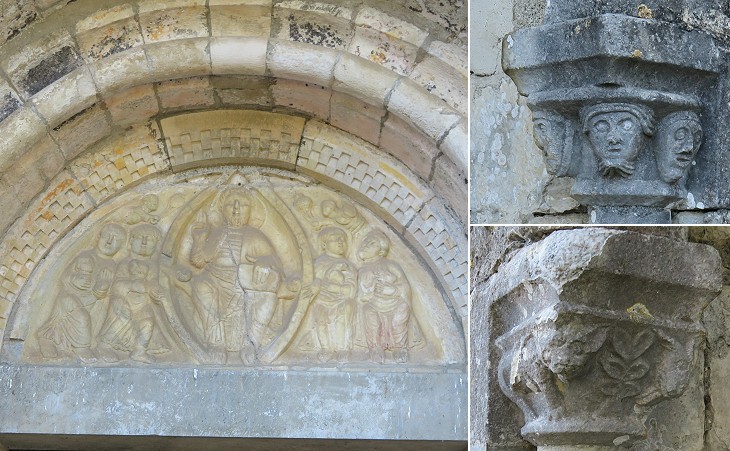 Saint-Just-de-Valcabrère: (left) relief of the tympanum of the portal portraying Jesus Christ in a "vesica piscis" (aka "mandorla"), a pointed aureole, and the Four Evangelists; (right) other small capitals from a now empty Gothic niche next to the portal

The relief of the tympanum uses the same iconography of much finer works at Toulouse and Arles. The exterior of the church shows very few additions after its consecration. Saint-Just-de-Valcabrère: (left) interior; (right) reliefs of a monumental tomb under the main altar which most likely housed relics of Sts. Justus and Pastor

The bare interior strikes for resembling that of an ancient building deprived of all its decoration. It probably had another aspect before the French Revolution. The church housed sarcophagi and funerary monuments. The worship of the saints' relics must have declined after the XIVth century because the medieval reliefs were not replaced by decorations reflecting new artistic trends. 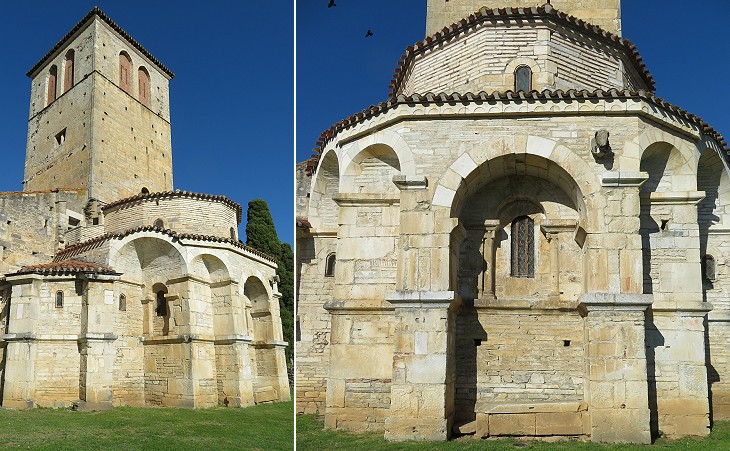 The layout of the apse initially puzzled art historians because it did not seem to correspond to that of the interior. This led to hypothesize it belonged to a Carolingian church, but an in-depth study of its structure eventually indicated that it is coeval to the interior. Excavations under the apse however have unearthed traces of an earlier small church.
In 1998 both the former Cathedral of Saint-Bertrand-de-Comminges and Saint-Just-de-Valcabrère were included in the UNESCO World Heritage List with other French churches on the route to Santiago de Compostela, e.g. Basilica of Saint-Sernin at Toulouse and Basilica of Saint-Seurin (Severinus) at Bordeaux. 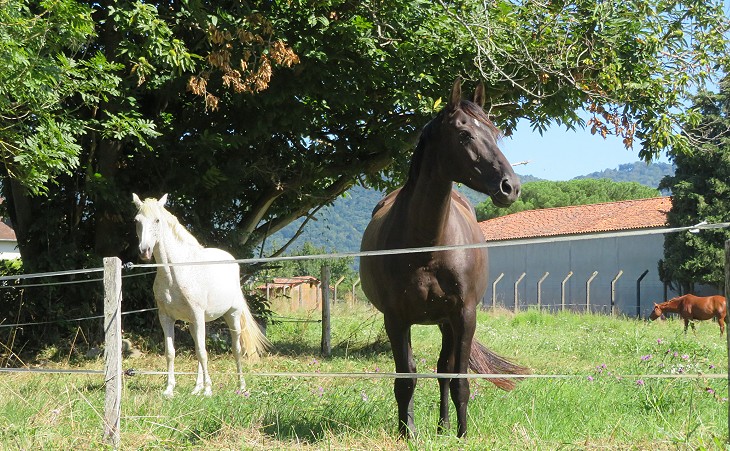 Return to the Lugdunum Convenarum, the Roman Town.