- Carmona
(left - Mosaic at Italica; right - decoration at the Alcazar of Seville) 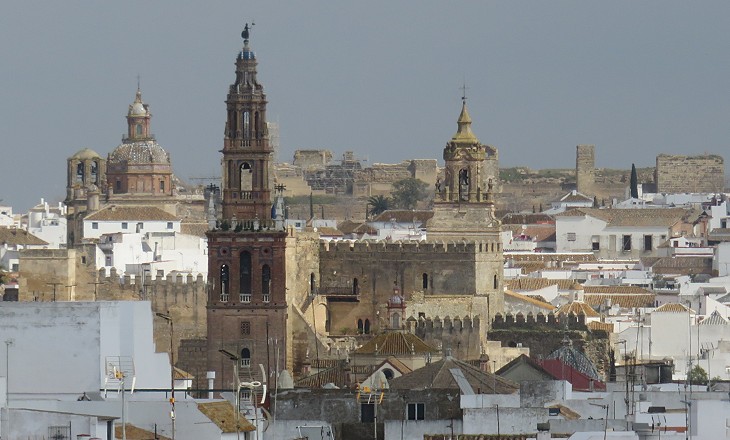 View of the town from the Roman necropolis; in the foreground the bell tower of San Pedro and the Alcazar (Castle) de la Puerta de Sevilla and in the background the walls of the fortress built by Don Pedro the Cruel

Having seen every thing in Seville that was recommended to our notice, we left it yesterday, and came to lie at Carmona; the road is through a perfect forest of olive-trees, which are much hacked and pruned, and set at the regular distance of twenty-seven feet asunder. Carmona is a large town, standing boldly on a high hill. Its castle, in ruins, covers a vast extent of ground, and contains many buildings that served for palace and fortress to Don Pedro the Cruel, and his family.
Henry Swinburne - Travels through Spain in the Years 1775 and 1776 in which several monuments of Roman and Moorish architecture are illustrated. 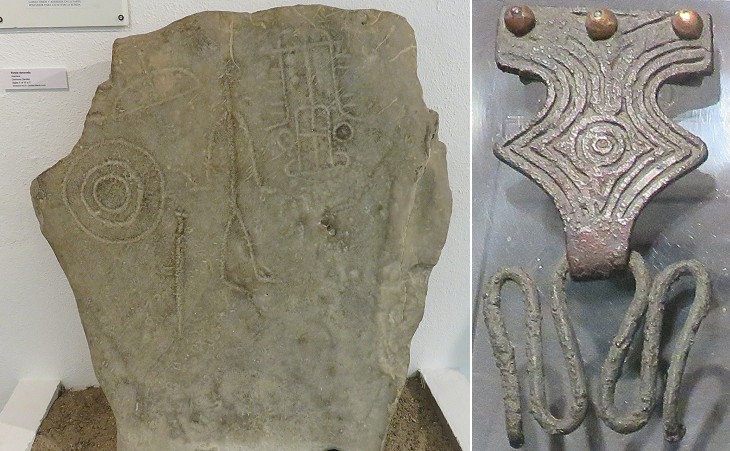 It turns out there are scores of steles with the same image of concentric circles situated in the area where the Tartessian culture flourished. Some have a sentinel guarding what I interpret to be the symbol of the concentric circle city. (..) The concentric circles are a perfect match to the description of Atlantis in "Critias" (one of Plato's dialogues).
Richard A. Freund - Digging through History - Rowan and Littlefields Publishers - 2012
Some archaeologists suggest that Tartessos, a town on an island in the Atlantic Ocean which could have been the mythical Atlantis, was situated in the region around Carmona. The ancient coastline was much nearer Carmona than it is today. 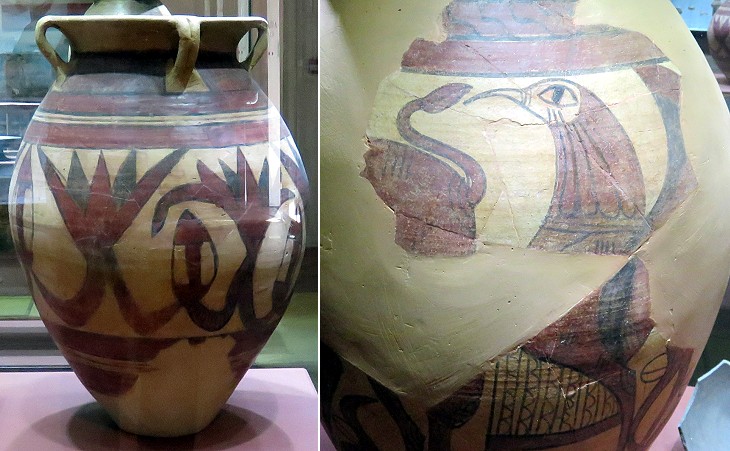 Tartessian pottery at the Museum of Carmona

Regardless of its identification with Atlantis, the region around Carmona knew the development of an advanced local culture prior to the establishment of Phoenician or Greek settlements on the coast of Spain. Ancient writers indicate that the area was rich in tin and silver which were traded with the Phoenicians who founded the port of Gades (Cadiz) to this purpose. 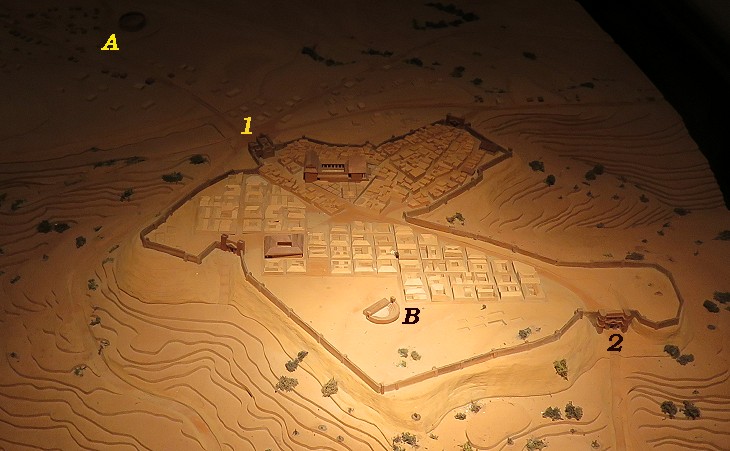 Museum of Carmona: model of the town: A) amphitheatre and necropolis; B) theatre; 1) Puerta de Sevilla; 2) Puerta de Cordoba

The Romans conquered Carmona in 206 BC during the Second Punic War. They could not redesign it according to their traditional square layout because of the morphology of the ground. Yet the main east-west street of a typical Roman town is clearly visible. It crossed Carmona from Puerta de Sevilla (south-west) to Puerta de Cordoba (north-east) and it was part of Via Augusta, the road which linked Narbo Martius (Narbonne in France) with Gades (Cadiz). 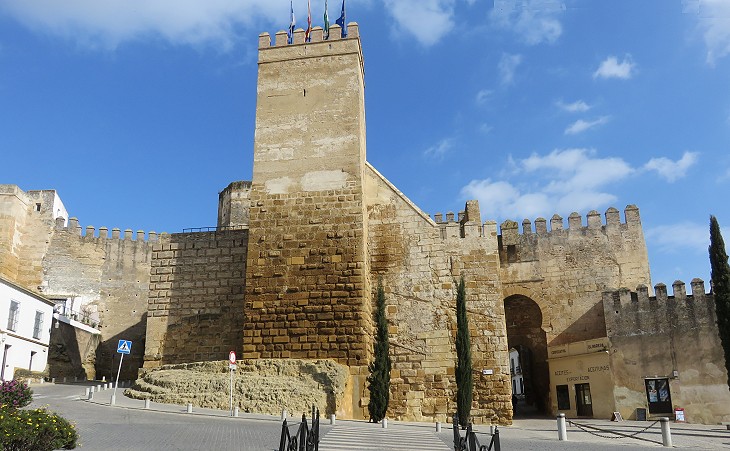 Cresting an aromatic uncultivated tract, the clean white town of Carmona rises on the E. extremity of the ridge, commanding the plains both ways. The prefix "car" indicates "height". Caesar fortified the city, "the strongest in the province". (..) Carmona, the Moorish Karmunah, with its Oriental walls, castle, and position, is very picturesque. (..) Remark the massive walls and the arched Moorish city-entrance.
Richard Ford - A Handbook for Travellers in Spain - 1855 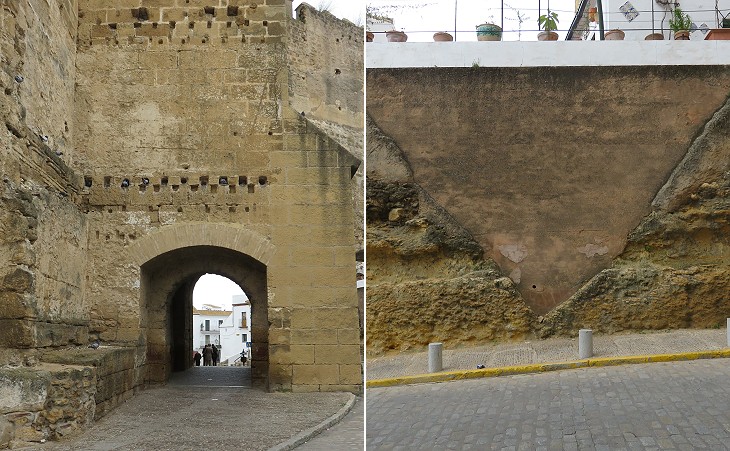 The northern side of the fortified gate retains its most ancient elements; a small Roman passage and a V-shaped dry moat which was dug by the Carthaginians to hinder cavalry attacks. The Roman gate was built making use of opus quadratum, large stones of the same size which were placed alternately with the longer side (stretchers) or the shorter side (headers) on the face of the wall. Roman mosaic portraying a Gorgon and the Four Seasons at the Ayuntamiento (Town Hall); it is a relatively rare example of black and white mosaic with small coloured sections

Like every place in this province, Carmona makes a figure in Roman history, and has many remains of their walls, inscriptions, etc. to shew as proofs of its ancient importance. Swinburne
In 1923 chance excavations in Calle Pozo Nuevo in the very centre of the ancient town led to the discovery of a fine mosaic, which today decorates the main courtyard of the nearby Town Hall. 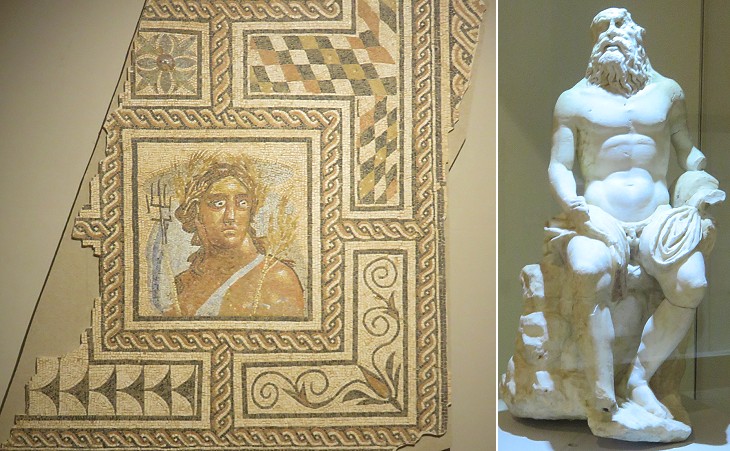 In 1897 some minor fragments of a floor mosaic were found in Calle Dominguez de la Haza, inside the city walls. In 2008, during excavations for cabling the town, a larger fragment depicting Summer was found. It provided a clue for a hypothetical reconstruction of the whole floor mosaic which was decorated with geometric patterns framing portraits of the Four Seasons (that of Fall is missing). It is likely that another subject was depicted at the centre of the mosaic. It might have been a Gorgon, but also a head of Bacchus/Dionysus or another mythological subject (e.g. Ganymedes). Carmona remained faithful to the Goths until betrayed to the Moors by the traitor Julian. Ford
Muza (an Arab commander) now ordered that the place should be taken by storm. The Moslems assailed it on all sides but were vigorously resisted. Many were slain by showers of stones, arrows and boiling pitch and many who had mounted with scaling ladders were thrown headlong from the battlements. (..) Muza was astonished and exasperated at meeting with such formidable resistance from so small a city for it was one of the few places during that memorable conquest where the Gothic valour shone forth with its proper lustre. While the Moslem army lay encamped before the place it was joined by Magued the Renegado and Count Julian the traitor with one thousand horsemen; most of them betrayers of their country and more savage in their warfare than the Arabs of the desert. To find favour in the eyes of Muza and to evince his devotion to the cause the count undertook by a vile stratagem to put this gallant city in his power. One evening just at twilight a number of Christians habited as travelling merchants arrived at one of the gates conducting a train of mules laden with arms and warlike munitions. "Open the gate quickly" cried they "we bring supplies for the garrison but the Arabs have discovered and are in pursuit of us". The gate was thrown open, the merchants entered with their beasts of burden and were joyfully received. (..) These pretended merchants were Count Julian and a number of his partisans. At the hour of midnight they stole forth silently and assembling together proceeded to what was called the Gate of Cordova. Here setting suddenly upon the unsuspecting guards they put them to the edge of the sword and throwing open the gates admitted a great body of the Arabs.
Washington Irving - The Legend of Don Roderick (the last Visigothic king) - 1835
The entrance to the town was strengthened in the XIIth century by the Almohad rulers of Carmona. They built a horseshoe gate before the existing one, thus creating a long narrow passage in which the enemies who had managed to pass the first gate would have found themselves in a trap. 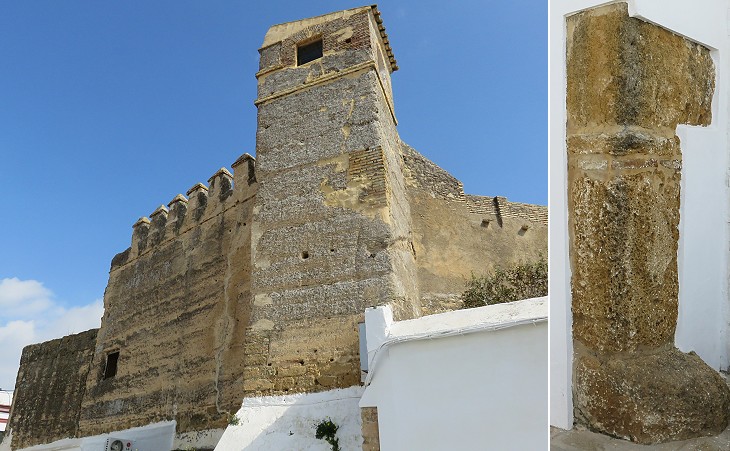 Carmona retains a large section of its historical walls which were made much taller by the Moors. They utilized a construction technique known in Spanish as tapia. It mixed dry earth with lime in a wooden mould where the components were pressed. In a way it was a less expensive type of opus caementicium. The resulting surface is very smooth (see also the walls of Seville). 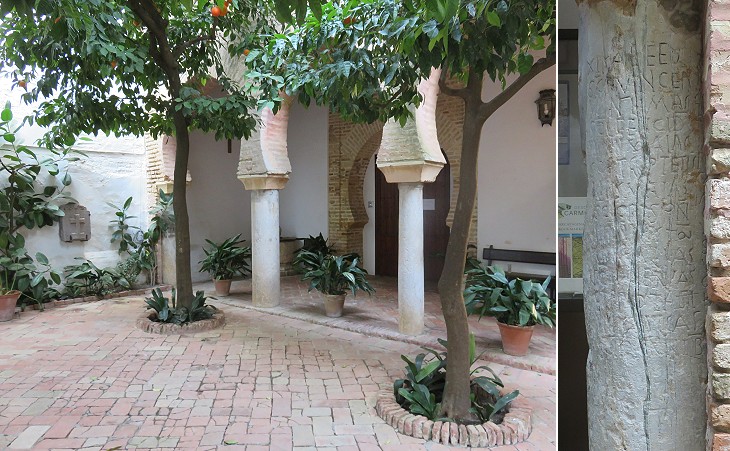 In 1247 King Ferdinand III of Castile conquered Carmona. He granted the Muslim population the right to retain their properties and for a period there were more Muslims than Christians in the town. Santa Maria de la Asuncion was built in 1424 on the site of the former main mosque, of which it retains the courtyard, similar to what occurs in the Cathedral of Seville. Ancient columns were utilized; one of them has an inscription with a religious calendar; it most likely belonged to a previous Visigothic church. 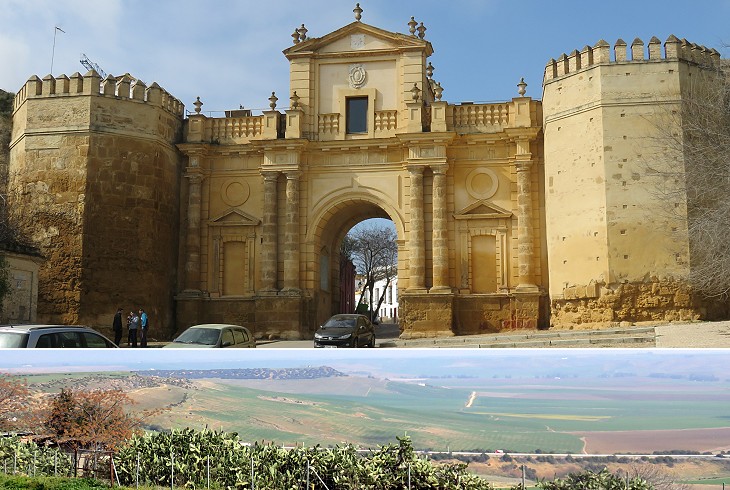 Puerta de Cordoba and view of the countryside

After travelling three leagues we arrive, and enter by the Cordova gate. Carmona is a small ancient town, which looks down over large plains. It was as once inhabited by the Carmonenses of Caesar, who gave them the title of municipal, after conquering Varro, the general of the troops of Pompey's party. Two of its gates, those of Seville and Cordova, are Roman structures; the latter is a magnificent monument. The streets are tolerably handsome.
Alexandre de Laborde - A View of Spain - translated into English for Longman, Hurst, etc. 1809
The striking gate leading to Cordova is built on Roman foundations, with an elevation of Doric and Ionic. (..) The view over the vast plains below is magnificent; the Ronda and even Granada chains may be seen. Ford

Observe the tower of San Pedro, which is an imitation of the metropolitan Giralda. Ford
The image used as background for this page shows the head of a statue found at a necropolis near the amphitheatre which you can see in Carmona: Outside the City Walls.