- Roman Seville
(left - Mosaic at Italica; right - decoration at the Alcazar of Seville) 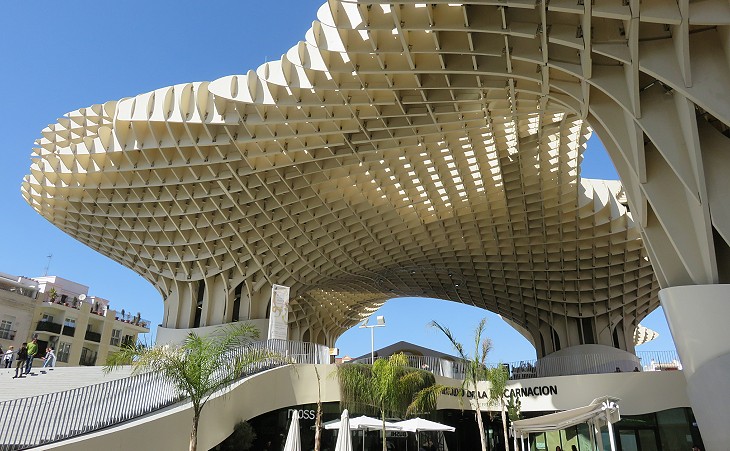 Seville is supposed to have been founded by the Phoenicians, who gave it the name of Hispalis: the Romans called it Julia; in after-ages the old name returned, and after a variety of corruptions, seems to have been revived in the modern appellation of Sebilla, or Sevilla, for the Spaniards use both indiscriminately. Under the Roman government it was embellished with many magnificent buildings, destined for purposes of public utility and amusement; but I believe the very ruins of those edifices have long ago disappeared.
Henry Swinburne - Travels through Spain in the Years 1775 and 1776 in which several monuments of Roman and Moorish architecture are illustrated.
The city was purely Moorish, as the Moslem, during a possession of 5 centuries, entirely rebuilt it, using the Roman buildings as materials. (..) Of Roman remains there are, consequently, scarcely any.
Richard Ford - A Handbook for Travellers in Spain - 1855 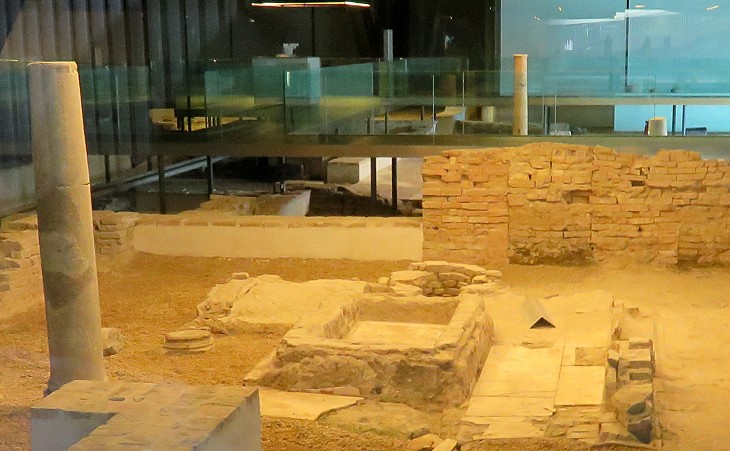 Swinburne and Ford could not envisage that in 1990 deep excavations for the construction of an underground parking lot in the centre of Seville would have led to the discovery of a number of Roman houses. Municipal authorities debated what to do next for fourteen years. Eventually they decided to build a large open air complex with restaurants and coffee shops. The ancient buildings can be seen in the underground level, a course of action which has been adopted for other Roman ruins in Spain as at Sagunto and Badalona. 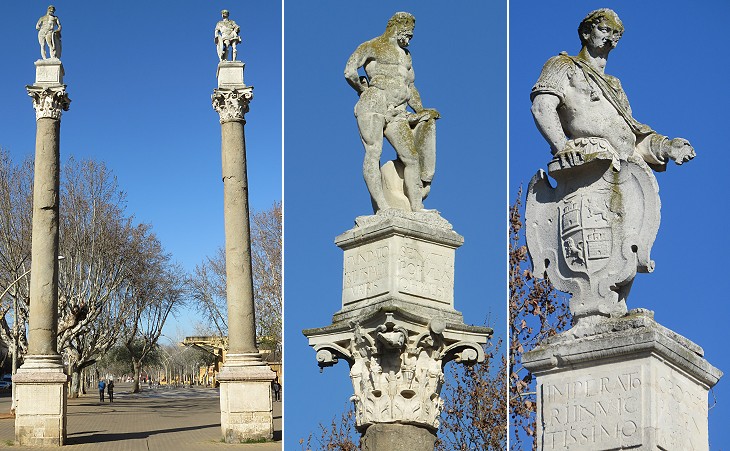 Ancient columns from a temple of Seville which were erected in 1578 at Alameda de Hercules. They support statues of Hercules (Fundatori Hispalis Urbis) and of Julius Caesar (Romulensi Coloniae Instauratori)

I repaired to the alameda, or mall, which is about three furlongs in length; five rows of trees divide it into four shady walks, or alleys: it is embellished with six fountains and several stone benches, and small canals of water run at the foot of each row of trees. At one end are two very high columns of granite, taken from a temple of Hercules which existed here in times of very remote antiquity; on the top of one is placed a statue of Hercules, and on the other one of Julius Caesar.
Richard Twiss - Travels through Portugal and Spain, in 1772-1773
The widest and handsomest place is the Alameda, or great walk of old elms, in the heart of the city; it is six hundred yards by one hundred and fifty, decorated with three fountains, and the statues of Hercules, the reputed founder, and Julius Caesar, the restorer of Seville. Swinburne
Of its ante-Roman history little is known beyond the fact that it was soon eclipsed by Italica, a military town, by Gades (Cadiz), a sea-port, and by Cordova, the residence of patrician settlers. Julius Caesar patronised Seville, because Cordova had espoused the side of Pompey; having captured it, forty-five years before Christ, he became its second founder, made it his capital, a "conventus juridicus" or town of assize, and gave it the title "Colonia Iulia Romula Hispalis", the little Rome. Ford 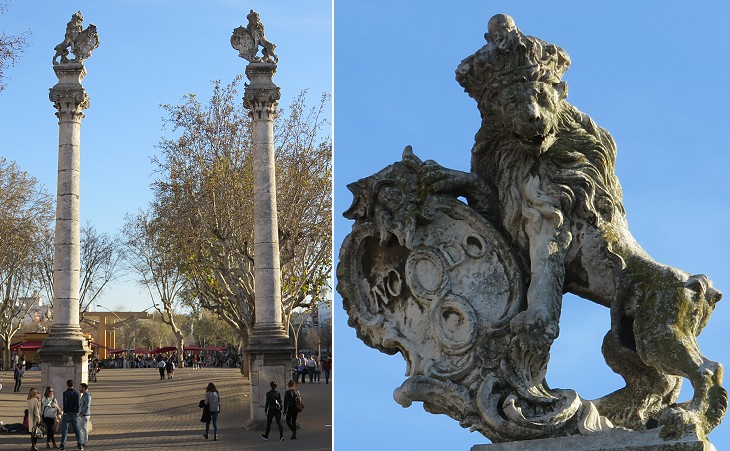 (left) 1764 columns at the end of Alameda de Hercules; (right) lion holding the symbol of Seville

At the other end of the mall are two modern columns, with a lion on the top of each. Between the hours of six and eight in the evening the Spanish ladies resort hither in their carriages, and from ten to midnight they return hither again to walk, especially on Sundays, attended by their cortejos. Twiss
Alonso (Alfonso X, King of Castile and Leon in 1252-1284) gave Seville the badge, which is to be seen carved and painted everywhere. It is called El Nodo, and is thus represented "No 8 do"; the hieroglyphic signifies "No ma dexaDo", "It has not deserted me." "madexa" in old Spanish meant a knot, (..) thus was reproduced unintentionally the old Phoenician merchant mark, the Nodus Herculis (a knot tied very hard, and in which no ends were to be seen) - the knot which guaranteed the genuineness of the contents of every bale: hence the mark of these founders of commerce became the symbol of peace, trade, and of the god of thieves, and was perpetuated by the Greeks in the twisted ornaments of the herald Caduceus of Mercury. Ford (left) Roman inscriptions at the foot of Giralda, the gigantic minaret/bell tower of Seville; (right) 166 AD dedicatory inscription by the "navicularii" (shipowners) of Hispalis to Sextus Iulius Possessor from Mactaris, an officer in charge of the supervision of the transportation of olive oil to Rome

Tradition relates, that to form a solid foundation for it, the Moors made a deep hole, into which they cast all the marble and stone monuments of the Romans that could be found: when repairs have been necessary, and the ground has been opened near the bottom, many broken ornaments and inscriptions have been discovered. Swinburne
Ancient Roman inscriptions were used also for the construction of the minaret of Kairouan. 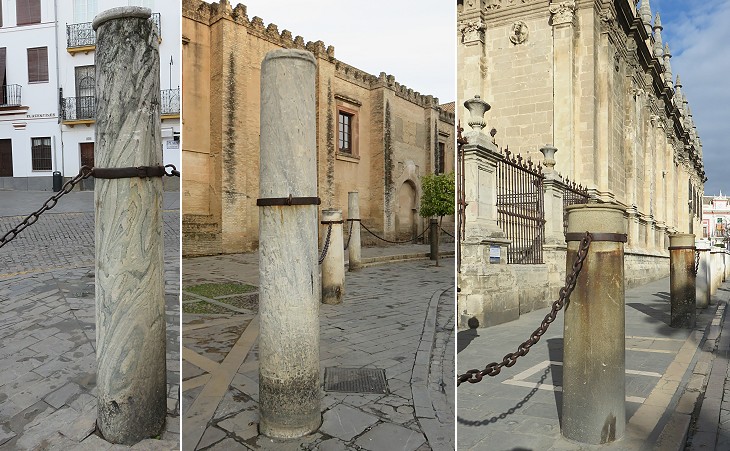 Ancient columns around the Cathedral

The church, is environed by pieces of broken columns of granite and porphyry, linked to each other by chains to keep carriages off. Twiss
One hundred fifty-seven small ancient columns were placed around the Cathedral in 1565 to support chains which marked the boundary between the ecclesiastical and the secular jurisdiction. Their exact provenance is unknown, but it is likely that many of them were found at Italica. They are of granite or veined marbles which, unlike white marbles, could not be calcined in order to produce lime mortar. 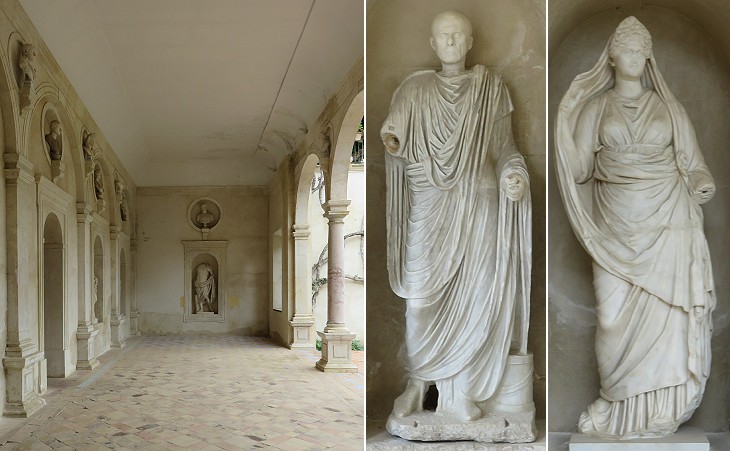 Casa de Pilatos: ancient statues in "Jardin Grande" (it opens in another window)

The statues are: a Muse, a very tall Ceres, and two Pallases larger than life: they are believed to have been brought from Naples, and to have been the work of a Greek sculptor. The court is also embellished with twenty four antique heads, some very fine. Two galleries in the garden contain a large collection of antique sculptures: one of them is full of heads, sepulchral urns, fragments of antique statues, and two statues of consuls: the other contains the helmet of a statue of Alexander extremely well done, a Ceres, a Marcus Aurelius very finely executed, and a great number of columns of different marble, some of antique green, and six with Corinthian capitals, of excellent workmanship.
Alexandre de Laborde - A View of Spain - translated into English for Longman, Hurst, etc. 1809
In the Casa de Pilatos are some mutilated antiques, of the second-rate merit of such sculpture as is usually found in Spain. (..) In the pleasant garden (..) observe marbles and sculpture, given to Serafin (Pedro Afan) de Ribera by Pius V, cast like rubbish amid the weeds. A selection was removed to Madrid by a Duke de Medina Celi, to whom this deserted palace now belongs. Ford 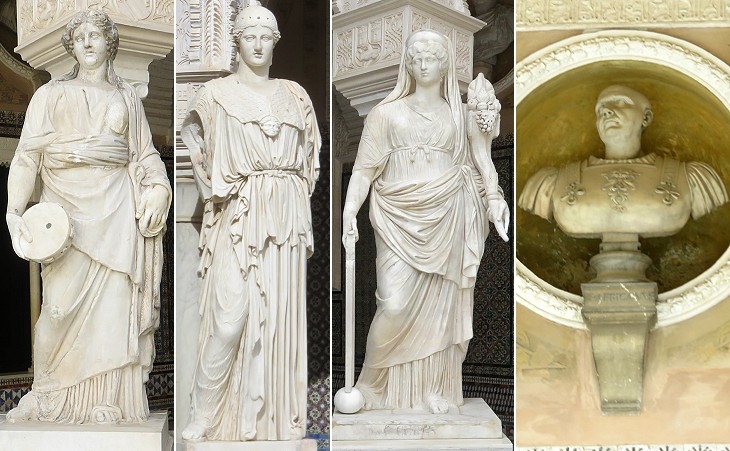 Casa de Pilatos: statues of a dancer, Minerva and Ceres and a bust of Scipio Africanus in the main courtyard

Pedro Afan Enriquez de Ribera was Viceroy of Naples in 1559-1571 and in that period, similar to many Italian cardinals and noblemen, he gathered a collection of antique statues which he eventually sent to Seville. Fernando Afan Enriquez de Ribera was Viceroy of Naples in 1629-1631 and Luis Francisco de la Cerda y Aragon, Duke of Medinaceli, in 1695-1702. They both were able to enrich the family collections with antiquities from Italy.
It is difficult to assess the provenance of each of the ancient statues and busts which embellish Casa de Pilatos. The large majority comes from Italy, some could have been found at Italica and a few are XVIth century imitations of ancient statues. All were largely completed/restored in line with the usage of the time. 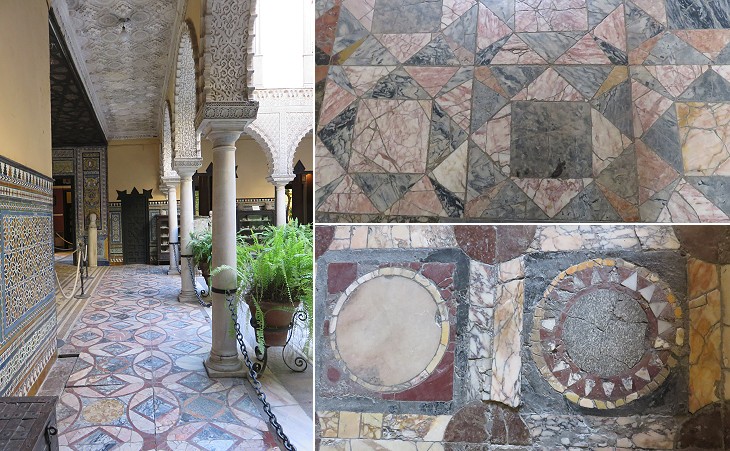 In 1901 Regla Manjon Mergelina, a childless widow with a fortune, bought a small palace in the centre of the town. She embellished it with ancient statues and mosaics which in those years were being found at Italica and at some Roman villas in the environs of Seville. In 1914 she was bestowed with the title of Countess of Lebrija, a town of Roman origin, near Sanlucar de Barrameda, her birthplace at the mouth of the River Guadalquivir. 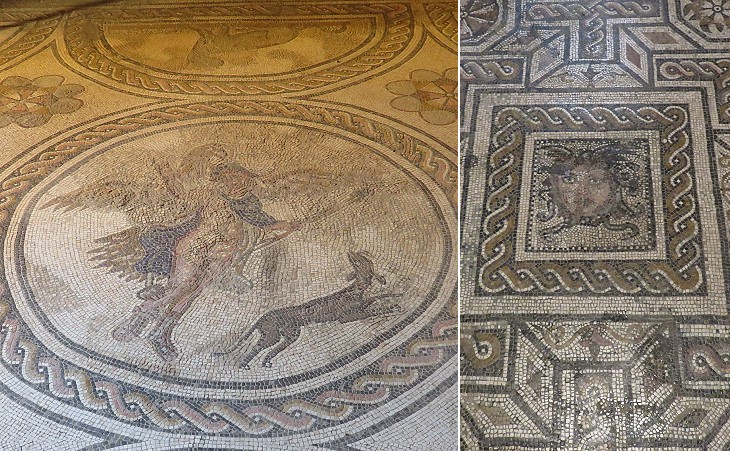 The Loves of Zeus from Italica, a famous Roman mosaic, embellishes the main courtyard, but it is not the only ancient floor mosaic of the palace. The rooms where they were placed were designed by José Sayez y Lopez taking into account their size. The ancient Romans did not have much furniture in their rooms which impaired the view of the floor mosaics and to some extent this occurs also in this palace. 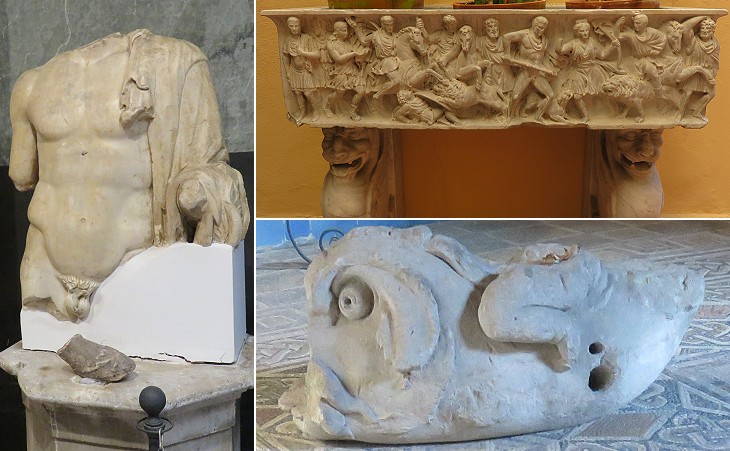 The Countess gathered an interesting collection of artefacts which was not limited to those of the Roman period, but included exhibits of the Moorish one as well as some pieces from the American Spanish colonies.
In Calle de Federico de Castro (..) N° 18 is the Palacio Lebrija to which visitors are usually admitted in the morning (on previous application; gratuity).
Blue Guide - Southern Spain and Portugal - 1929
In 1999 the heirs of the Countess opened the palace to the public and since then it has become a "must see" of Seville. 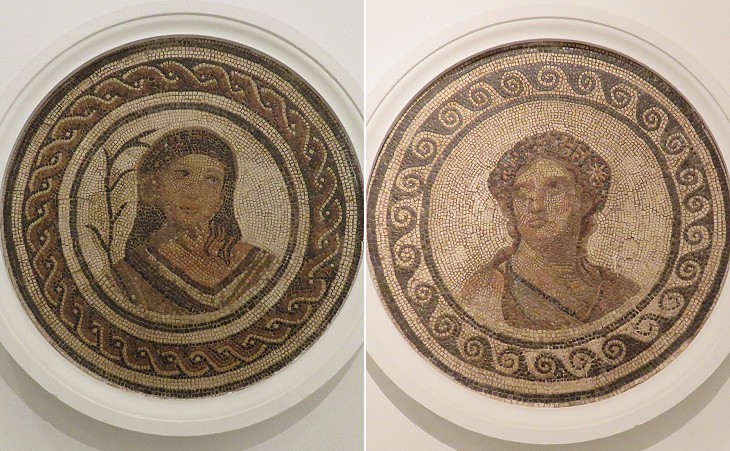 Archaeological Museum of Seville: Autumn and Spring from Dos Hermanas near Seville

The Archaeological Museum of Seville was first established in 1868, but it achieved great importance only in the early XXth century when legislation was passed to protect the ancient works of art which were found in the environs of Seville. It displays many fine statues from Italica.

Move to Real Alcazar, Mudéjar Monuments or Moorish Seville or return to the introductory page.