Layout of the Necropolis 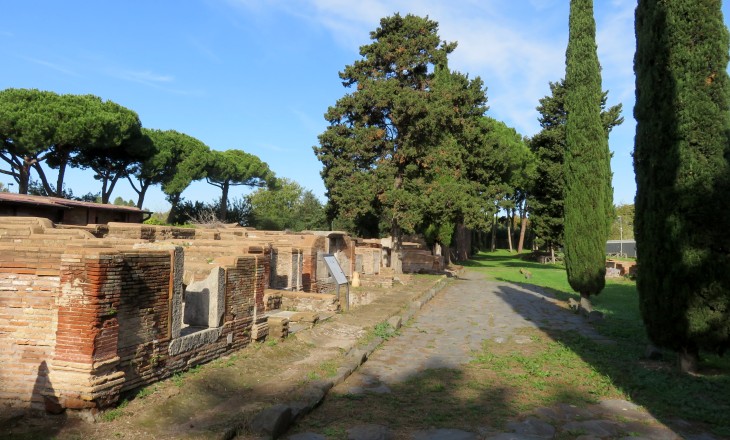 The Great Necropolis of Porto was built in a period of approximately 100 years between the reigns of Emperor Trajan and Emperor Septimius Severus along Via Severiana, the road which linked Porto to Ostia and other towns along the coast. 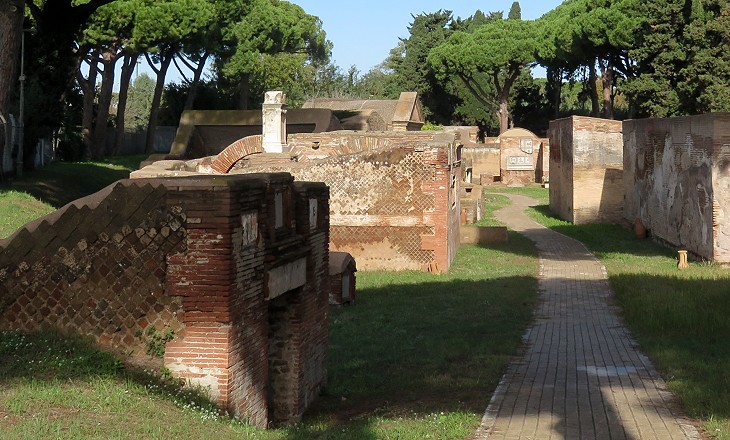 Archaeologists have been able to date with some precision all the tombs because of slight variations in the types of bricks with which they were built. The oldest ones are located along a street which runs to the west of Via Severiana. 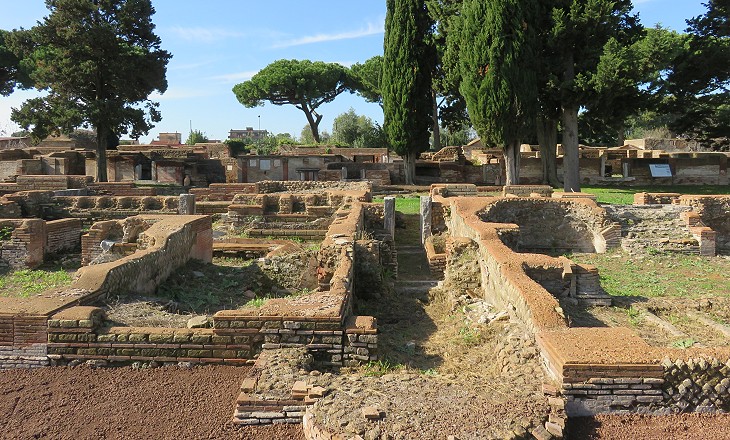 Eastern side of the necropolis

Most of the tombs to the west of Via Severiana are almost entire and have retained their ceilings. Those to the east instead are identifiable only from their floors and the lower sections of their walls. They were built at a lower level than those on the opposite side of the street.

Tomb E25 "Of the Harvest": (left) the floor mosaic after which the tomb is named; (right) Hercules in a later floor mosaic

The most interesting tomb of the eastern section was unearthed and studied in 1988-1989. It is characterized by an earlier floor mosaic with panels showing phases of the production of wheat flour, perhaps because the owners of the tomb were involved in this trade, which was subsequently partially covered by a more traditional funerary floor mosaic portraying Hercules escorting Alcestis out of Hades to Admetus, her husband (see a sarcophagus depicting this myth at Velletri). 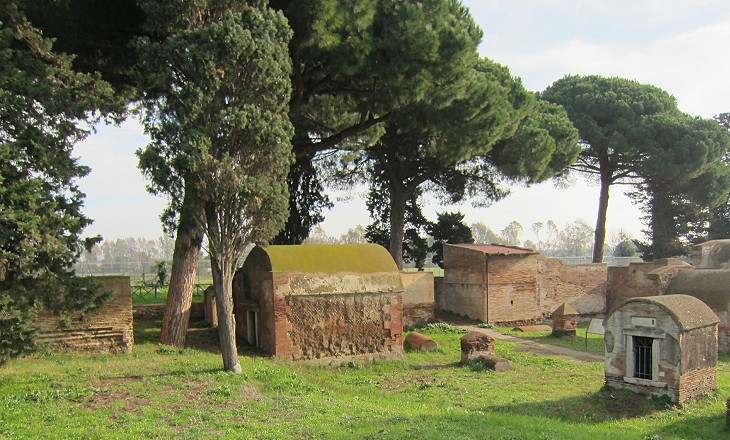 Smaller tombs were built behind the large ones. They are scattered in an area which perhaps had a fence. Because of their small size it is likely that other similar tombs still lie under the ground.

Design of the Tombs 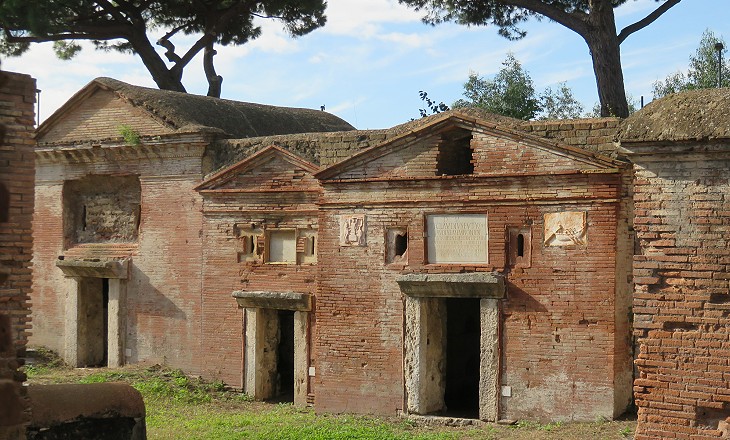 The tombs of the necropolis do not recall those along Via Appia Antica which greatly differ in size, shape and decoration and are usually detached one from the other. Modern visitors to the necropolis have the feeling of being in a town for the living with middle-class terraced houses. 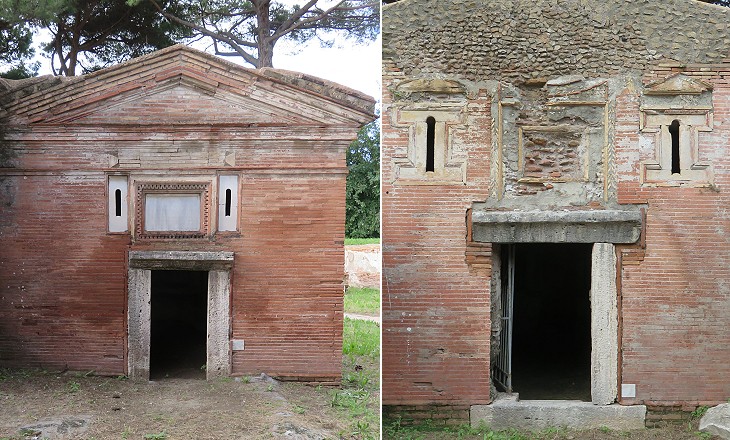 All tombs and their architectural features (e.g. entablatures, pediments and frames) were made up of bricks. The uniform reddish appearance of the buildings was interrupted by the travertine frames of the doors and by the use of marble for the central inscriptions and for the decoration of two narrow openings. The latter had the only purpose of allowing some light into the building and for this reason they were placed near the ceiling. 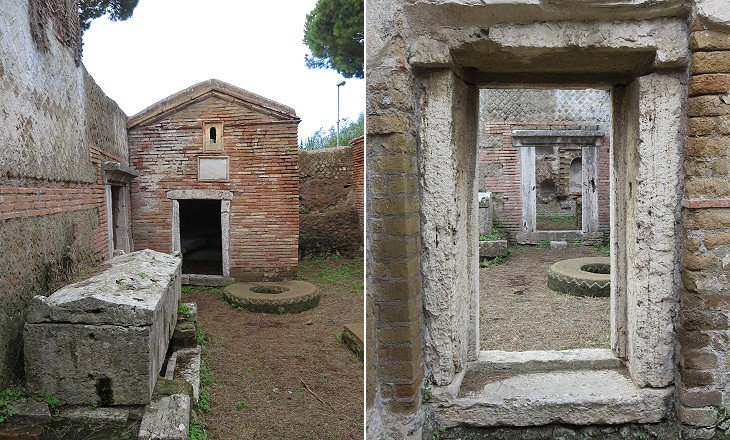 Tomb 94: views of its inner courtyards

The oldest tombs were built for housing cinerary urns. Tomb 94 is interesting because it shows that four families associated themselves to build a complex where they shared the entrance on the street and some open spaces and facilities. Each family owned a small columbarium (dovecot), a building for cinerary urns, inside the complex. The dead were not commemorated all together on the same day once a year, but funerary rites took place on the birthday anniversary of each of the dead and on some public holidays. Occasionally tombs show the decline of some families and the growth of others. Marcus Cocceius Daphnus bought a large land lot to house the columbarium of his family (Tomb 75). His heirs at one point chose to sell a piece of the enclosure to Marcus Antonius Agathias who opened a second entrance and built an inner wall to separate his tomb (Tomb 76) from the main one in the same precinct. 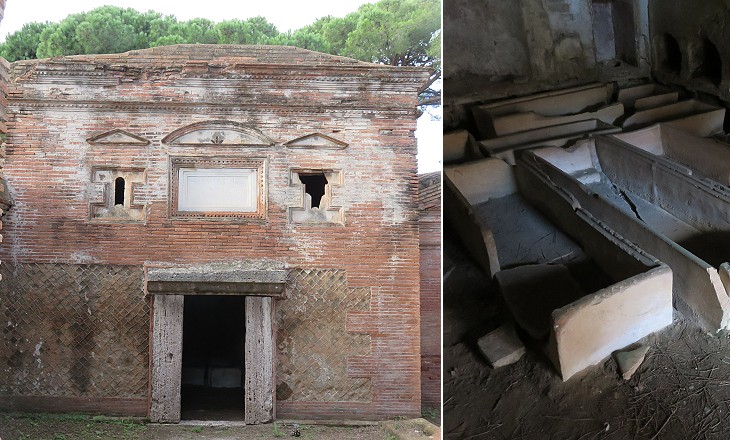 Towards the end of the IInd century cremation lost ground in favour of inhumation inside sarcophagi. Many columbaria were adapted to the new practice by digging an underground room where sarcophagi were placed or by removing some cinerary urns and creating arcosolia, large niches on the walls, which housed the sarcophagi of the most important members of the family. 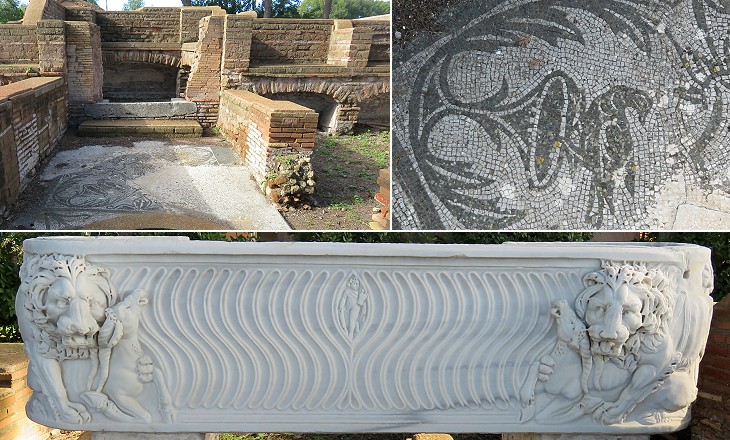 (above-left) Tomb 34 aka Collegio Funerario; (above-right) detail of its mosaic showing a dove on a vase, a symbol of the soul and of the memory of the dead; (below) sarcophagus which was found in the building

Eventually inhumation in sarcophagi became the standard mode of burial, at least for those who could afford it. Tomb 34 was built in the early IIIrd century and it had space for housing 150 sarcophagi. Most likely it did not belong to a family, but it was a sort of public facility. The "families" referred to in this page were very large as they included those of the liberti (freedmen) who usually continued to work for their former owners. The cinerary urns or the sarcophagi of the masters however were usually placed in a more eminent position than those of the freedmen. The image used as background for this page shows the inscription of the tomb built by Clodia Prepusa, a freedwoman, for herself, her husband and for her freedmen and their heirs. 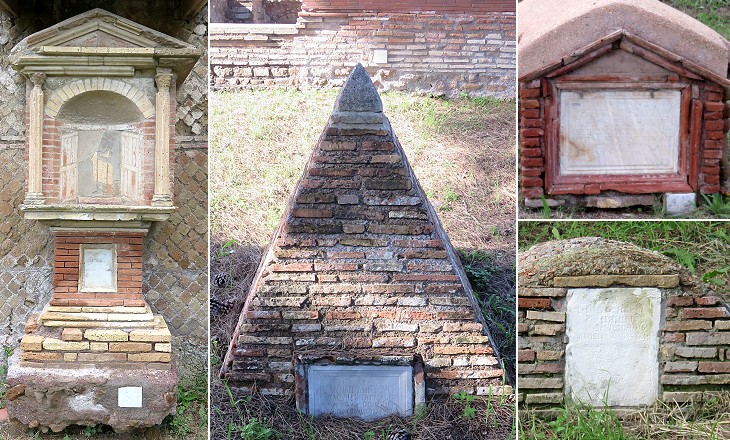 Small tombs: (left) 56, it was made by a father for his son, the decoration of the niche shows a man entering a door, a symbol of death; (centre) 1, it belonged to Annaeus Acticus who came to Porto from the French town of Poitiers; (right-above) 99, it was built by the parents of Petronia Stolis who lived twenty years, twenty-two days and four hours; (right-below) another small tomb, it was built for a friend

A number of small tombs housed just one or very few cinerary urns. The design of some of them departs from the general one and their inscriptions provide interesting information on the inhabitants of Porto. 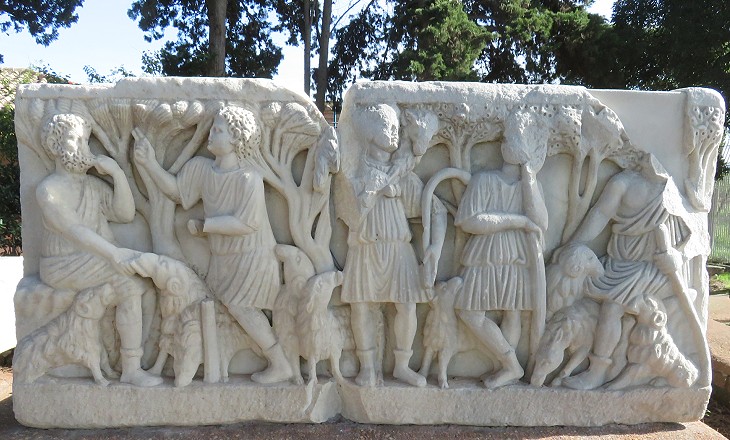 Sarcophagus of the Shepherds

The use of the Great Necropolis was discontinued towards the end of the IIIrd century so it does not include early Christian tombs. The Good Shepherd and shepherds in general are regarded as typical Christian subjects and some details of a beautiful mosaic at Ravenna strongly recall the sarcophagus shown above. As a matter of fact the iconography of the Good Shepherd derives from that of Hermes Kriophoros (ram-bearer).

Return to Ancient Porto or move to the Great Necropolis - page two or to Medieval Porto and Modern Fiumicino.