Neapolis (Nabeul)
(detail of the theatre at Thugga)

Neapolis was founded by the Phoenicians after Carthage and this perhaps explains its Greek name (Nea Polis) which means New City. Other sources report that it was founded by Greek colonists and that it was conquered by the Carthaginians subsequently.
During the Third Punic War, Neapolis sided with Carthage and it must have been punished by the Romans for this, because there are no references to it for a long period. During the war between Pompey and Caesar the town sided with the latter and it was rewarded with the status of colonia, which granted its citizens a series of rights, including some related to trade. Colonia Julia Neapolis became a prosperous port with its own guild of navicularii (shipowners) (see the mosaic of the Carthaginian navicularii at Ostia). After the Arab conquest it rapidly declined, but its name did not disappear and it currently indicates Nabeul, a town a couple of miles to the east of ancient Neapolis. 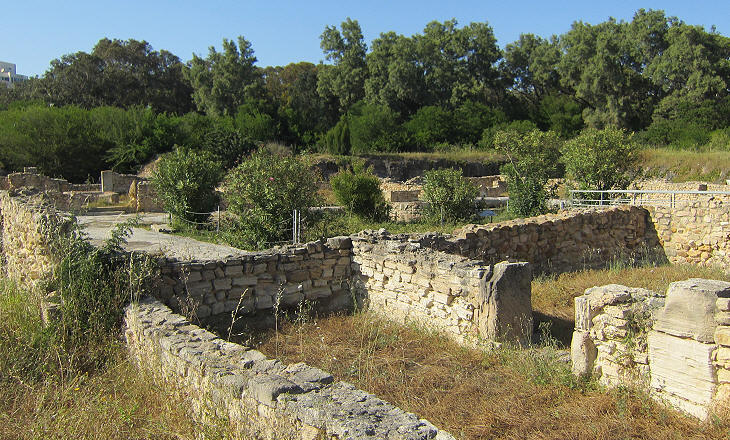 We came to Nabeul, a very thriving and industrious Town, which hath been long famous for It's Potteries. It is built, in a low Situation, at a Mile's Distance from the Sea Shore, and about a Furlong to the Westward of the antient Neapolis, which appears to have been a large City, without taking in what is supposed to have been gained by the Sea. Here are a great Number of Inscriptions upon Stones of six Foot in Length and three in Breadth; but They are either so unfortunately defaced, or filled up with Rubbish and Mortar, that It required more Time, than my Guides would allow me to copy.
Thomas Shaw - Travels or Observations relating to several parts of Barbary and the Levant - 1738
The ruins of the ancient town were used as quarries for centuries and they eventually disappeared under the Arab town. In the second half of the XXth century Nabeul and its province which includes Hammamet, a popular sea resort, experienced a hasty and uncontrolled urban development which covered whatever memories of the past were left.
Eventually during the construction of yet another holiday village along a beach, the ruins of a Roman house containing some very fine mosaics were found and Tunisian authorities decided to protect the area. 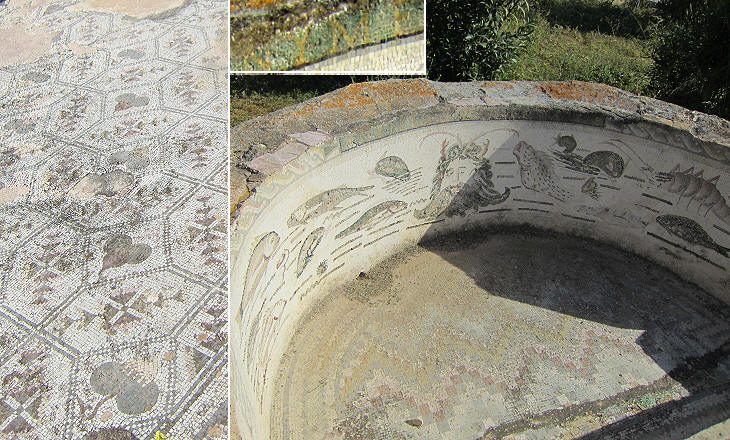 Nympharum Domus: (left) geometric mosaic; (right) apse shaped fountain at the centre of the courtyard; (inset) part of the inscription "Nympharum Domus" above the head of Oceanus (see similar mosaics at Thuburbo Majus and at the Museum of Sousse)

The house is known as Nympharum Domus because of an inscription on a small fountain. The mosaic decorating the fountain portrays Oceanus (with horns made of crab claws) surrounded by sea creatures, including the crustacean which can be seen in the image used as background for this page. The mosaicist made a mistake because crustaceans, which are decapods, have ten legs. 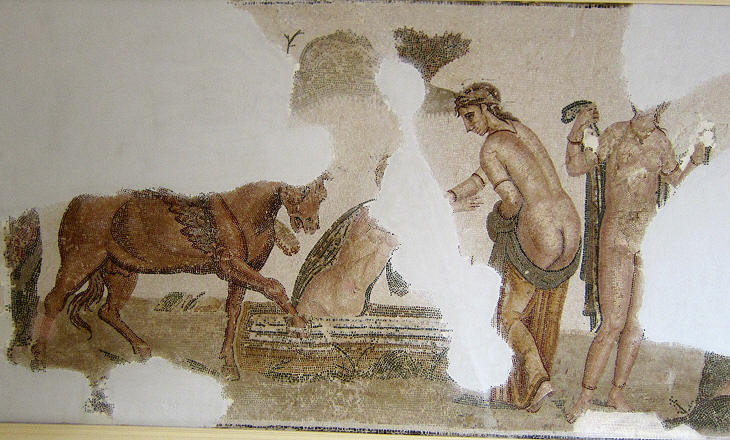 Museum of Nabeul: floor mosaic from Domus Nympharum: The Muses bathing in Hippocrene, the fountain created by Pegasus when its hoofs struck a rock on Mt. Helicon (see fountains of Pegasus at Villa d'Este and Villa di Bagnaia)

Most of the rooms around the courtyard were paved with large coloured mosaics, some of which have been moved to a small museum in town. They are dated IVth century AD and they show the persistence of subjects related to the Classical World. The mosaic of the Muses bathing in a fountain is a variation on the theme of the Three Graces, which was very popular throughout the whole Roman Empire (see an example at Philippopolis, today's Shahba in Syria). Three Muses, similar to the Graces, were portrayed with one of them turning her back to the viewer. 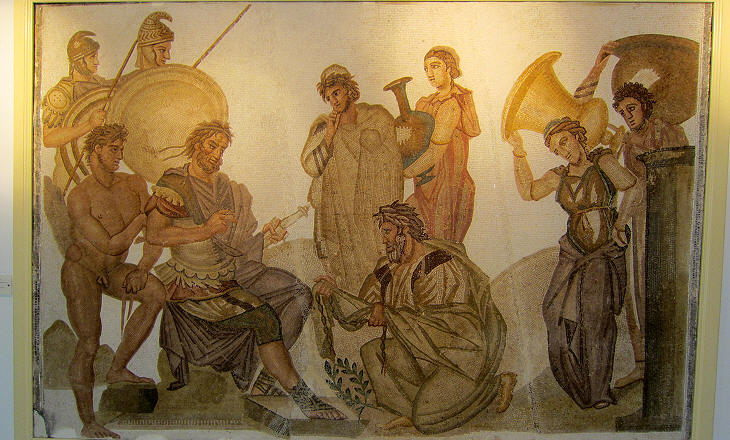 Museum of Nabeul: floor mosaic from Domus Nympharum: Chryses pleading with Agamemnon (between Achilles and Ulysses) to release his daughter Chryseis by offering gold chains and Apollo's wreath

Homer's poems were another source of inspiration for large mosaics. The episode of Chryses pleading for the release of his daughter is described at the very beginning of the Iliad:
The wrath sing, goddess, of Peleus' son, Achilles, that destructive wrath which brought countless woes upon the Achaeans, and sent forth to Hades many valiant souls of heroes, and made them themselves spoil for dogs and every bird; thus the plan of Zeus came to fulfilment, from the time when first they parted in strife Atreus' son, king of men, and brilliant Achilles. Who then of the gods was it that brought these two together to contend? The son of Leto and Zeus (Apollo); for he in anger against the king roused throughout the host an evil pestilence, and the people began to perish, because upon the priest Chryses the son of Atreus had wrought dishonour. For he had come to the swift ships of the Achaeans to free his daughter, bearing ransom past counting; and in his hands he held the wreaths of Apollo who strikes from afar, on a staff of gold; and he implored all the Achaeans, but most of all the two sons of Atreus, the marshallers of the people: Sons of Atreus, and other well-greaved Achaeans, to you may the gods who have homes upon Olympus grant that you sack the city of Priam, and return safe to your homes; but my dear child release to me, and accept the ransom out of reverence for the son of Zeus, Apollo who strikes from afar. Then all the rest of the Achaeans shouted assent, to reverence the priest and accept the glorious ransom, yet the thing did not please the heart of Agamemnon, son of Atreus, but he sent him away harshly, and laid upon him a stern command: Let me not find you, old man, by the hollow ships, either tarrying now or coming back later, lest your staff and the wreath of the god not protect you. Her I will not set free. Sooner shall old age come upon her in our house, in Argos, far from her native land, as she walks to and fro before the loom and serves my bed. But go, do not anger me, that you may return the safer.
Translation by A.T. Murray 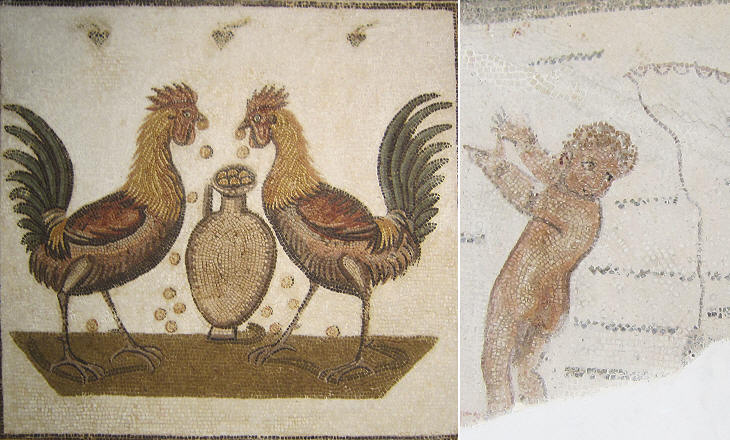 Museum of Nabeul: (left) cocks dropping gold coins (from Domus Nympharum); (right) fragment of a mosaic with a marine subject

Some mosaics are less easily interpreted; they probably refer to sayings we do not know any longer, but which were popular at the time because the subject of the cocks dropping gold coins was found in other mosaics near Nabeul. According to J. P. Darmon the cocks are symbols of Himeros, son of Aphrodite and twin of Eros who created uncontrolled sexual desire in those he struck with his arrows. In particular they represented the satisfaction of the desire.
The subject of children fishing or otherwise being involved in marine activities was a recurring theme (see a mosaic at Uthina). 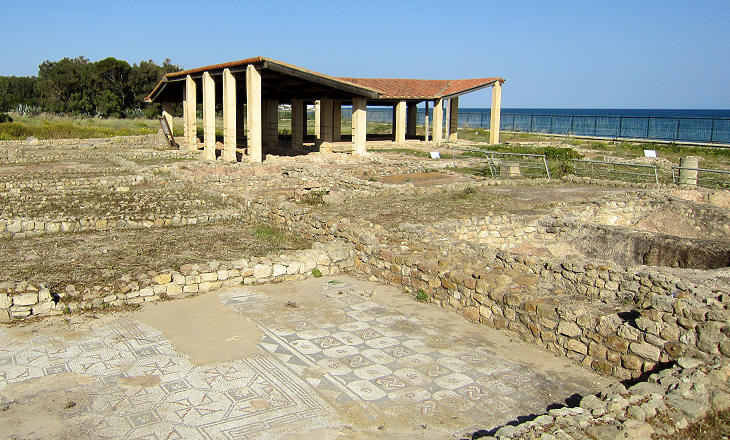 Another house with some fine elegant mosaics was found very near the sea. It probably belonged to the owner of an adjoining factory where garum, a fish based sauce, was manufactured and shipped. Amphorae full of powdery remains of garum with fish bones, fragments of vertebrae and tiny heads of small fry were found in the ruins of the factory. 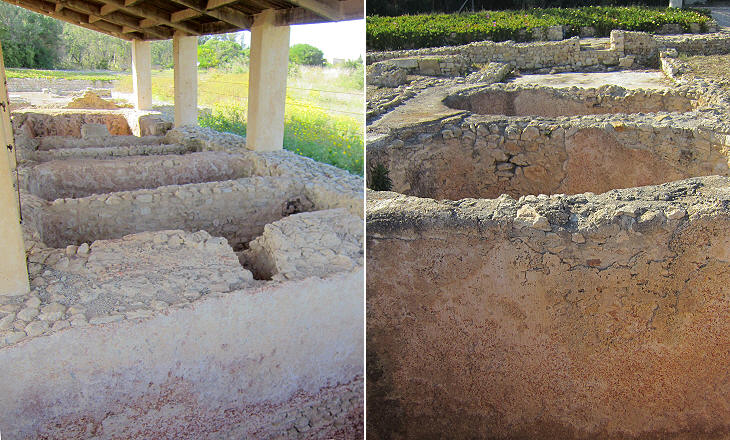 Garum factory: basins of different size and depth which were used in the manufacturing process

Expirantis adhuc scombri de sanguine primo accipe fastosum, munera cara, garum. "Accept this exquisite sauce made from the first blood of the expiring mackerel; an expensive present." Martial - Epigrams - Book XIII - CII - Bohn translation.
Martial is one of many Roman writers who made reference to garum. None of them however gave a clear indication of how it was manufactured and there are conflicting reports about its cost. Garum was made up of small fish and interiors of large ones which were macerated with herbs. It was shipped to Rome in tall and narrow amphorae. It is likely that because of its strong salty taste it was mixed with olive oil resulting in a sort of vinaigrette. It was served on the table from an urceus, a special pitcher.
Garum factories have been found on both sides of the Strait of Gibraltar at Baelo Claudia and at Lixus. 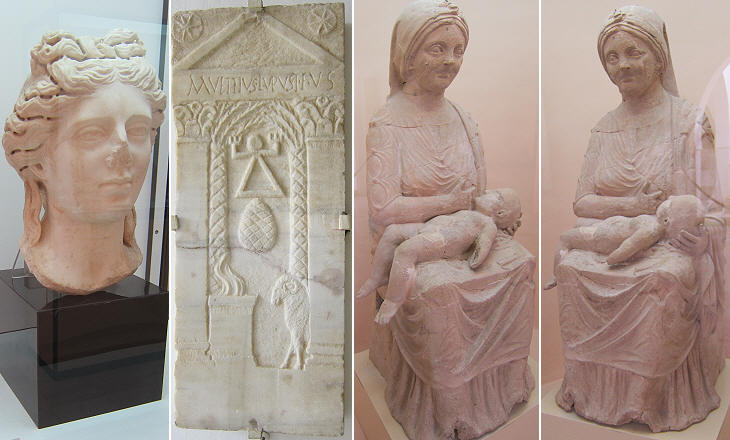 Museum of Nabeul: (left to right) head of a woman found at Domus Nympharum; stela representing a temple to Tanit, a Carthaginian goddess; pottery statue of Nutrix (Ist century AD), a fertility goddess

During the French Protectorate over Tunisia (1881-1956) most of the works of art found in the country were moved to the Museum of Bardo in Tunis. In the last decades Tunisian authorities have opened a number of local museums such as that of Nabeul to display artefacts closer to the location where they were found.
The statue of Nutrix was found at Thinissut, a rural shrine in the province of Nabeul. Breast feeding goddesses were rarely portrayed in classical antiquity, but during the Hellenistic and Roman period their depiction became more frequent. Representations of Isis, the Egyptian goddess, as "Isis lactans" breast feeding two infants, have been found in the whole Mediterranean area. In Italy Mater Matuta was portrayed nursing an infant. The statue of Nutrix found at Thinissut is impressive because it resembles an Early Renaissance Madonna and Child.
The Museum of Nabeul houses also some interesting mosaics from Clypea (Kelibia), a Roman port north of Nabeul.