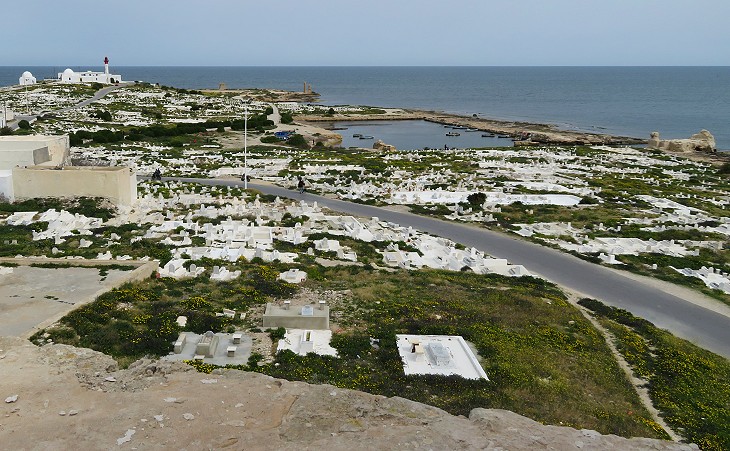 Ottoman Fortress of Borj el-Kebir: view towards the ancient harbour of Aphrodisium and Cape Africa

El Medea, called likewise Africa in the modern Geography, is situated upon a Peninsula five miles to the south of Demass (Thapsus), and appears to have been formerly a Place of great Strength and Consideration. The Port, which was an Area nearly of a hundred Yards in Square, lyeth within the very Walls of the City, (..) but is not capable at present of receiving the smallest vessel.
Thomas Shaw - Travels, or, observations relating to several parts of Barbary and the Levant - 1738
The square harbour was cut into the rock and it was adjoined by a small circular one, a layout and technique very similar to the harbours of Carthage.
When he had found the horses ready in the place he had ordered them to be, he crossed by night the territory which they call Byzacium and arrived next day at his castle on the coast between Acylla and Thapsus. There a ship was waiting for him, manned and equipped. Thus Hannibal left Africa, bewailing his country's fate more often than his own.
Livy -The History of Rome - Book XXIII - Translation by Even T. Sage
Archaeologists agree that Aphrodisium was founded by the Phoenicians, but there is no historical evidence of it and the site from where Hannibal left Africa is thought to be Sullectum. 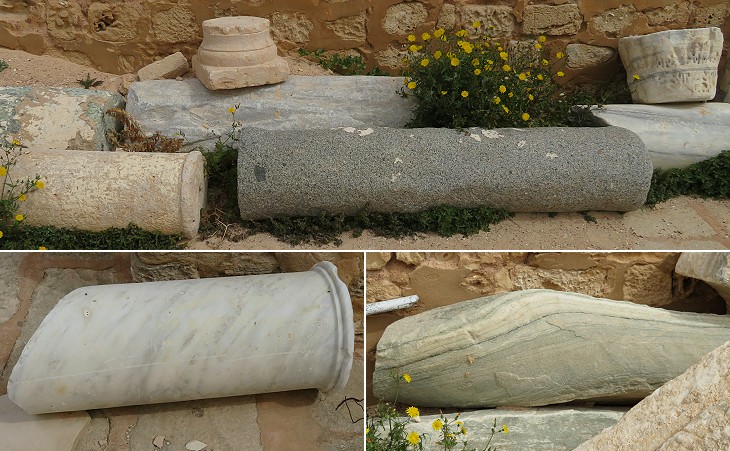 Roman columns in the courtyard of the fortress: (above) grey granite from Egypt; (below-left) "pavonazzetto" from Turkey; (below-right) "cipollino" from Greece

Leo says that It was founded, (It might have been possibly rebuilt) by Mahdi the first Patriarch of Kairwan, and therefore assumed His Name; but there is something too polite and regular in several of the remaining Capitals, Entablatures, and other Pieces of the antient Masonry, (defaced as they are at this Time) to suspect the Founder of Them to have been an Arabian. Thuanus (Jacques Auguste de Thou, a French historian - 1553-1617) hath given us a just Description of This Place; at the same Time he hath mistaken It for the antient Aphrodisium. Shaw
The Roman name of the town was debated for a long time. Aphrodisium or Africa was the name given to the town by XVIth century European geographers after it was conquered by Charles V in 1550. The Aphrodisium mentioned by Ptolemy has been identified with the harbour of Pheradi Majus. 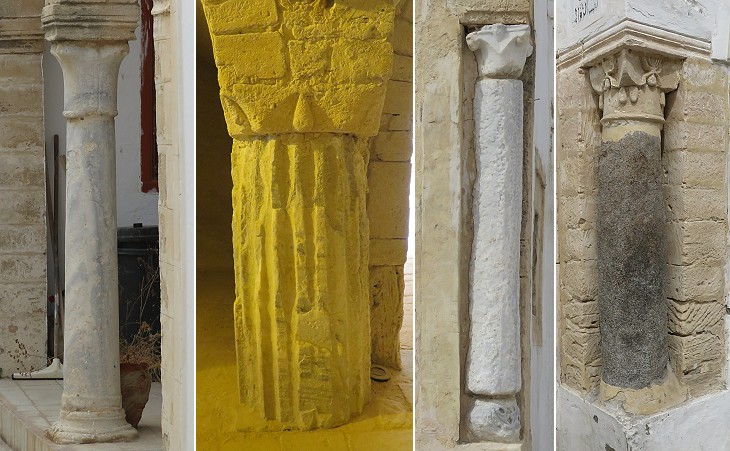 Roman columns in a mosque (left), in the fortress (centre) and in other buildings (right); some Roman columns might have been employed for the construction of the Cathedral of Pisa after Mahdia was sacked by a joint expedition of the Italian maritime republics of Genoa, Pisa and Amalfi in 1087

Mahdia does not retain evidence of the monuments of the ancient town, exception made for a number of columns which were utilized in some of its buildings; the Arab town was almost razed to the ground by the Spaniards when they abandoned it in 1554. 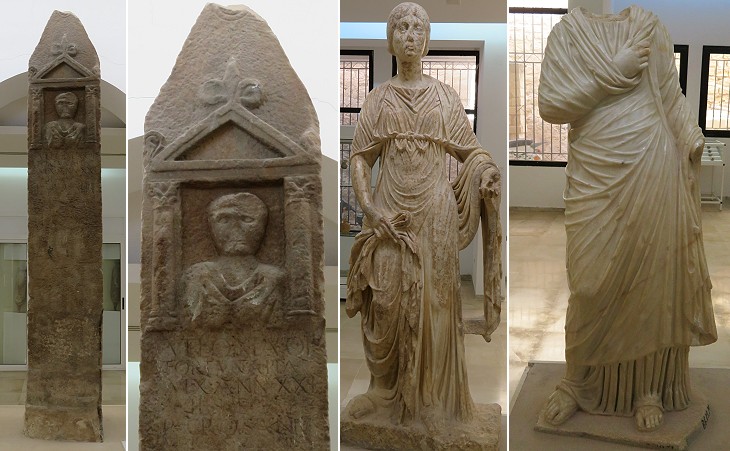 Museum of Mahdia: (left) stela to Saturn, the Roman god who was associated with the worship of Phoenician Ba'al; (centre/right) statues of draped Roman women

In 1974 Mahdia became the capital of a territory which was detached from the province of Sousse; it includes the town of El-Djem, ancient Thysdrus. A small museum houses funerary monuments and statues which were found at Mahdia or in its proximity together with some floor mosaics from Thysdrus. 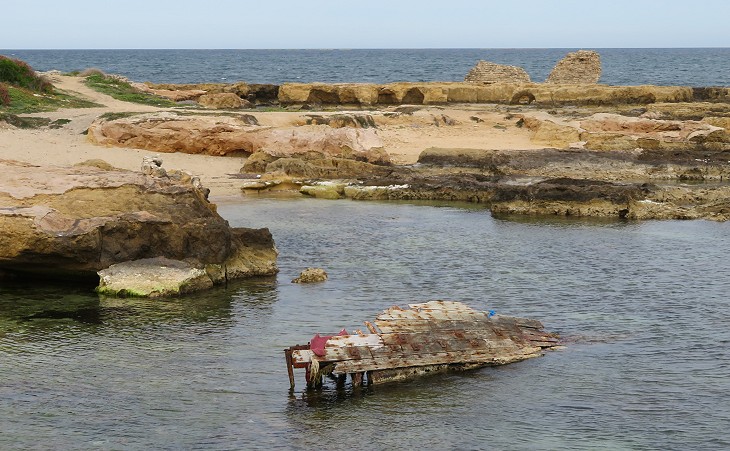 A wreck at Cape Africa

In 1907 Greek sponge fishermen identified an ancient shipwreck five km south of Cape Africa, the cape at the end of the peninsula of Mahdia. Alfred Merlin, Director of Antiquities in Tunisia, with the help of the French Navy conducted a series of campaigns which led to the recovery of marble columns, bronze statues and other decorative material. 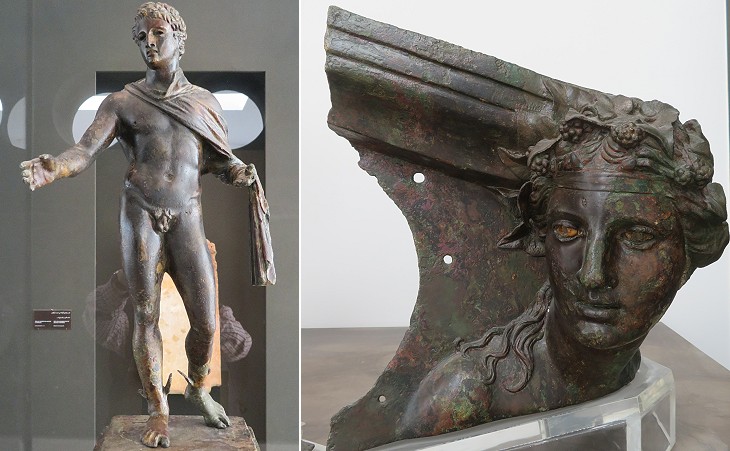 Archaeologists have come to the conclusion that the ship sank in the first part of the Ist century BC and that it was driven by high winds towards Cape Africa while travelling from Greece to Italy. Given the variety of the objects which were found, a hypothesis was put forward that they might be part of the Sack of Athens by Silla in 86 BC. However because some small bronzes and craters appear to have been serially manufactured, the cargo could have originated from a trade deal, rather than from a war event. 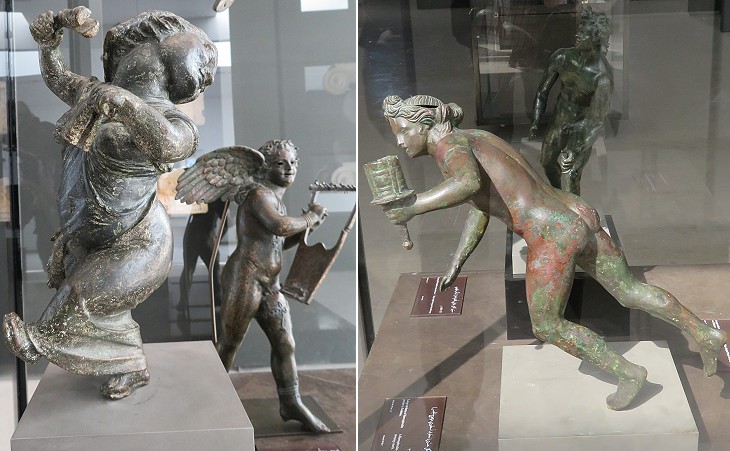 Museum of Bardo: small bronze statues from the Mahdia shipwreck: (left) a dancing dwarf and Cupid playing the lyre; (right) lamp holder in the shape of Hermaphroditus, the womanish son of Hermes and Aphrodite

The campaigns for retrieving the cargo at Mahdia were among the first instances of underwater archaeology, a branch of the science which led to the successful recovery of many ancient works art, e.g. colossal bronzes at Riace and Roman cargoes in Southern France. You may wish to see a page on the Arab town. 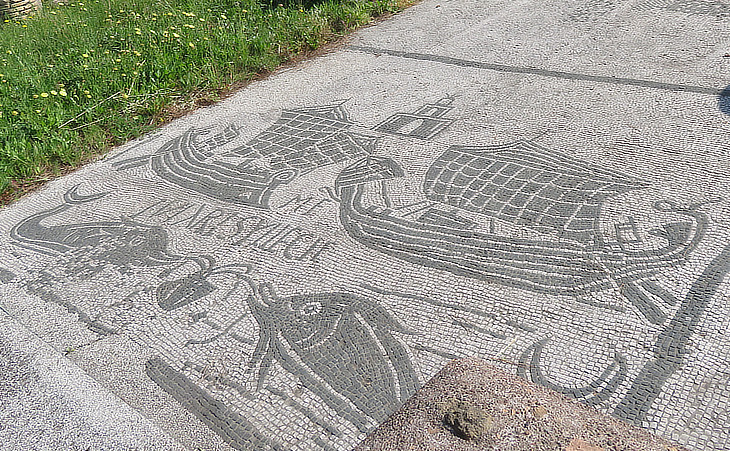 Five Miles to the S. by W. of El Medea, is Salecto the Sullecti of the middle Age, where we meet with the Ruins of a very large Castle. Shaw
Late in the afternoon our brig anchored in the roadsted, when I went on board, and on the following morning made sail for Sfakkus. (..) We passed by Burj Salekhtah, distant eight miles from Mahadeah, supposed by some persons to have been the Turris Hannibalis.
Sir Grenville Temple - Excursions in the Mediterranean - 1835
French archaeologists of the late XIXth century found very little evidence of what in antiquity must have been an important harbour. 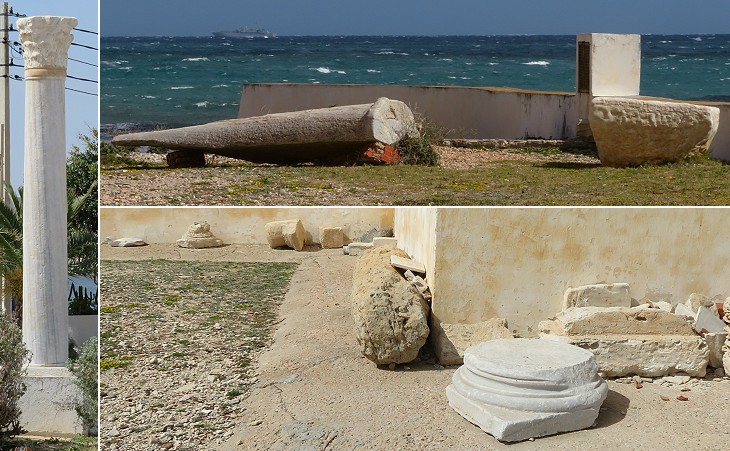 Roman materials outside the Museum of Salakta

On our way towards the sea we noticed a very fine white marble Corinthian capital and a greyish column next to it. (..) We reached a cape where we noted an ancient jetty; it might have been the commercial harbour.
Free translation from Victor Guérin - Voyage archéologique dans la Régence de Tunis - 1862
A small museum on the cape mentioned by Guérin houses some exhibits which were found in the proximity of the ancient town. 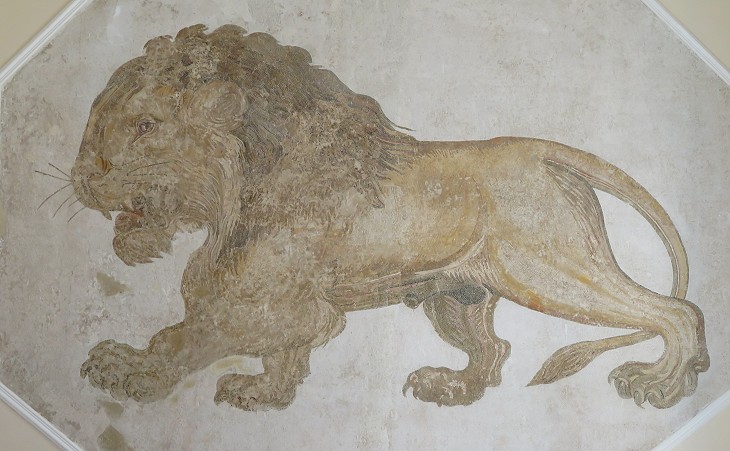 Mosaic of the Lion (IIIrd century AD); a detail can be seen in the image used as background for this page

This is the mosaic which makes Salakta worth the journey. It was discovered in 1958 at a Roman bath establishment. A museum, which could earn a Guinness record as the smallest one on Earth, was opened in 1980 to house it. The mosaic is remarkable because the beast is depicted in total isolation. The baths were built by a Leontius, which probably explains why a lion was chosen for a very large floor mosaic. You may wish to see mosaics depicting a lion from Uzita near Monastir and from the Roman Villa of Sidi Ghrib. 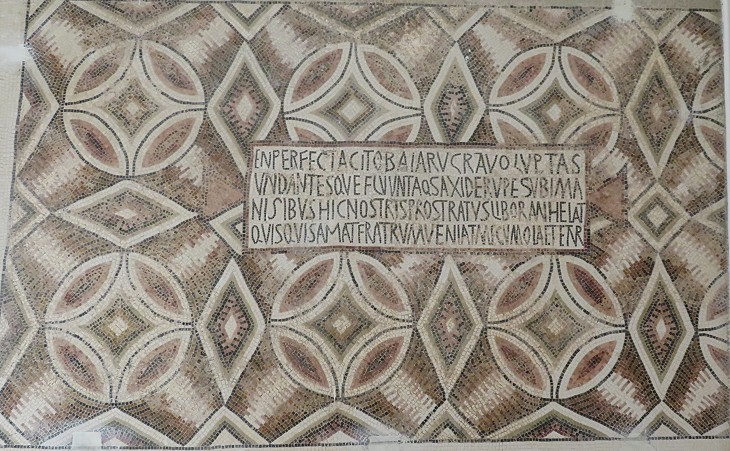 Floor mosaic from the same baths

The long inscription claims that the baths can provide an enjoyment similar to that at Baiae, in the Gulf of Naples. The geometric mosaic is not among the finest ones which have been found in the region, but the inscription in dactylic hexameters is evocative of works by Virgil and Ovid. 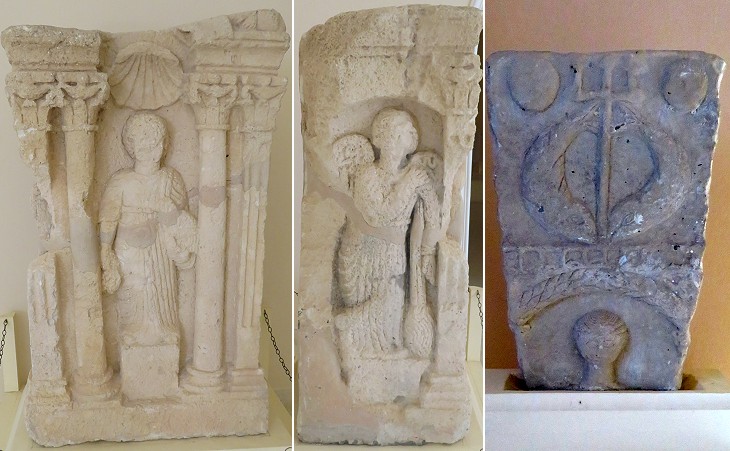 Necropolises with more than 2,000 tombs were found near the town. Very few of them had decorated tombstones or altars. 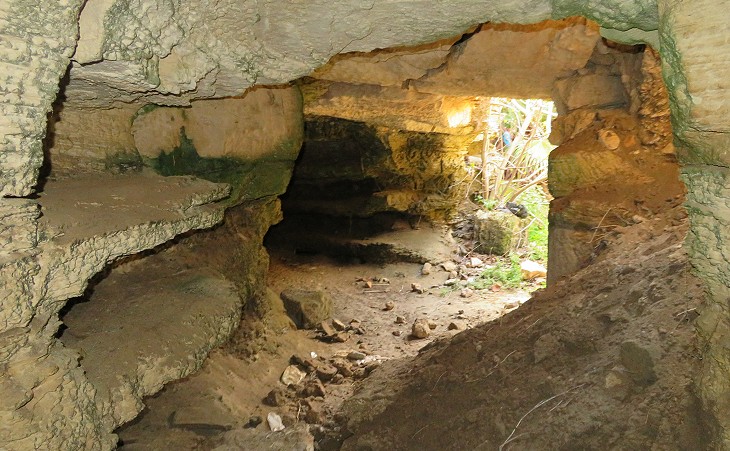 Catacombs: entrance (see their surroundings in the introductory page)

A very large underground Christian necropolis was found some miles south-west of the town. Unfortunately it has been abandoned for a long time and it is difficult to visit. 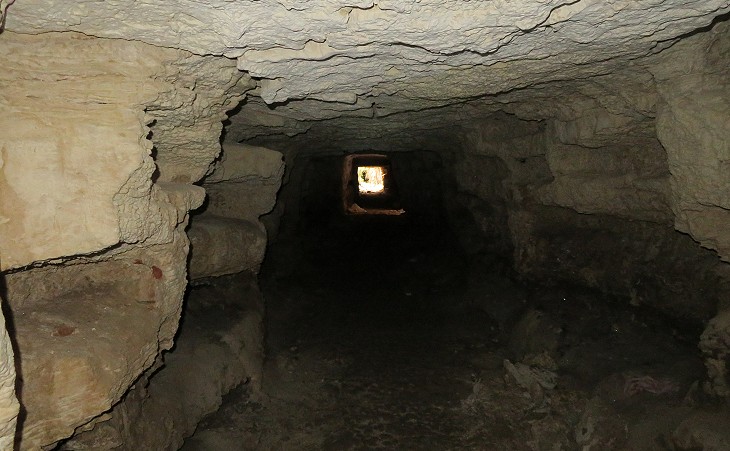