- Sfax
(the Great Minaret at Kairouan)

Sfax is a neat thriving city. It is walled round like Susa and Monastir where likewise by the same extraordinary indulgence of their Kaide (governor), the inhabitants enjoy the fruits of their industry, carry on a good trade in oil and linen and know little of that oppression which is severely practised in many other places of Barbary.
Thomas Shaw - Travels or Observations relating to several parts of Barbary and the Levant - 1738. 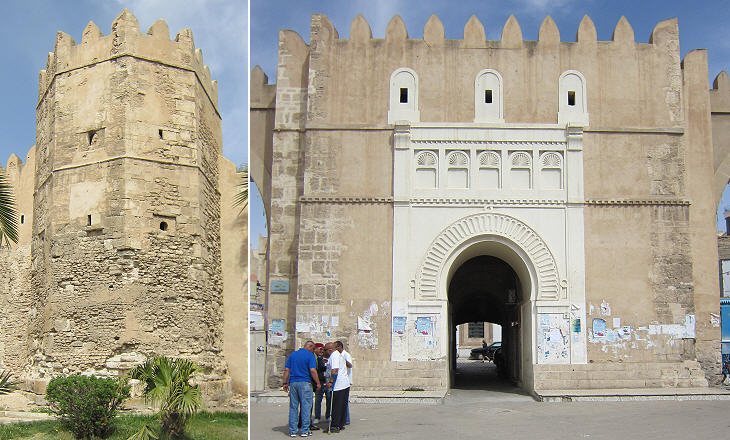 (left) A tower of the walls; (right) Bab ed-Diwan

In 1881 France imposed its protectorate over Tunisia and similar to what they did at Tunis, the French developed a modern town outside the medina (walled town) of Sfax. The walls however, unlike what occurred at Tunis, were not pulled down to open new roads. The main gate of the town which gave access to the harbour is named after Diwan, the council governing the town (the Diwan or Divan was the sort of cabinet chaired by the Gran Vizier in charge of advising the Sultan). It was damaged in 1943, but it has been restored to its original appearance. 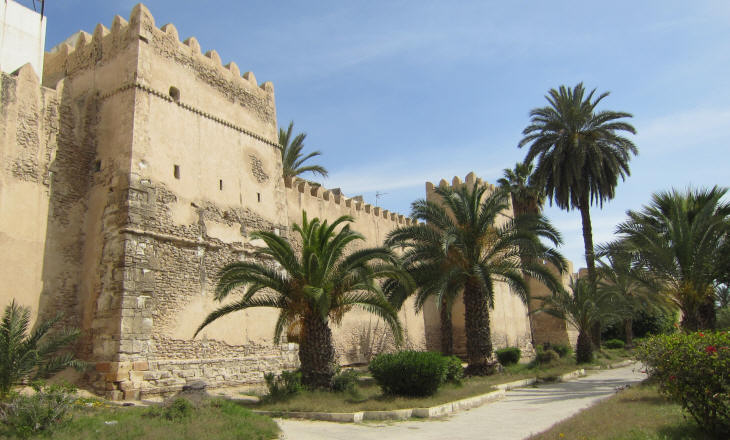 The walls of Sfax were not upgraded to the requirements of cannon warfare. In 1881 the inhabitants tried to oppose the French occupation, but they soon found out that although their town was called Sfax-the-Strong because of its walls, the latter were unable to withstand shelling by guns on French iron-clad warships (a typical example of gunboat diplomacy). 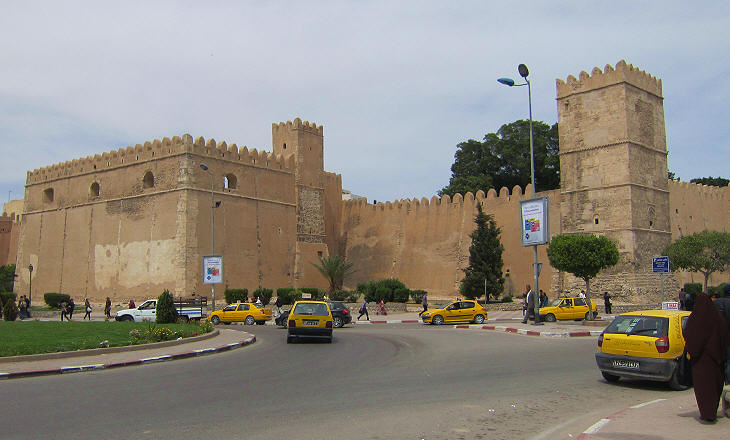 The Kasbah, the citadel adjoining the walls, shows some embrasures where modern guns could be placed. These were possibly made during or immediately after the 1539-54 period during which time the town was ruled by a local dynasty supported by the Spaniards.
Between 1149 and 1160 Sfax, similar to other coastal towns such as Monastir and Mahdia, was part of an ephemeral Norman Kingdom of Tunisia. 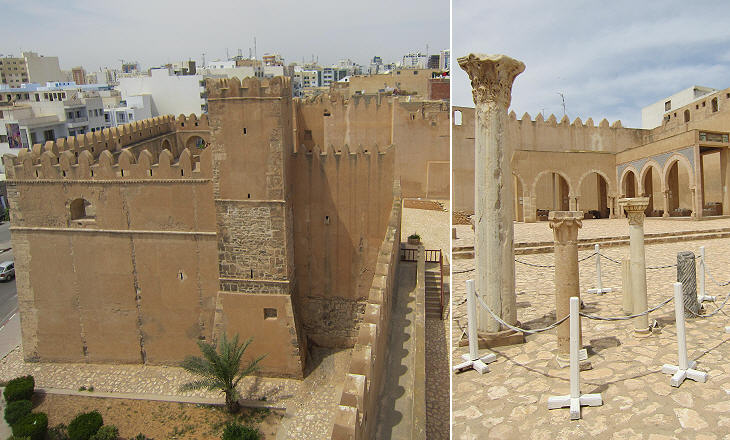 (left) Kasbah seen from its highest tower; (right) ancient columns in the courtyard

In the writings of the ancient authors it is almost impossible to find information allowing us to establish with precision the origins of the town of Sfax. The itineraries of Ptolemy and Antonin, and the more recent table of Peutinger make clear mention of a Roman city called Taphrura or Taparura, which was located between Usilla to the north and Thane to the south; but the distances indicated in these old documents do not agree well with the current location of the city. It is logical, however, to suppose that Sfax is built not far from the site of the ancient Taphrura. This assumption is much more acceptable since the suburbs of the city are strewn with Roman ruins.
Fernand Lafitte and Jean Servonnet - The Gulf of Gabes in 1888
The almost rectangular shape of the medina suggests that Sfax was built upon a Roman town. In addition to some ancient columns and capitals on display in the Kasbah, mosaics found in the environs of Sfax can be seen in the Town Hall. 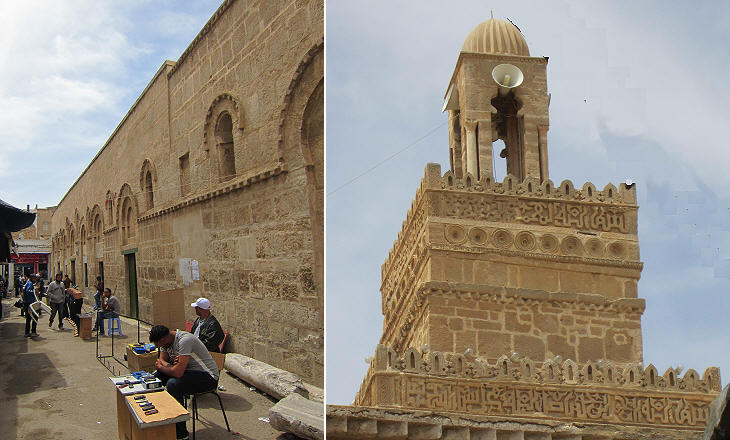 The Great Mosque of Sfax was enlarged in the XIXth century, but its eastern side retains the original design of the XIth century. The minaret has three levels, similar to that of Kairouan, but it has a gentler aspect owing to an elaborate decoration and Kufic inscriptions. 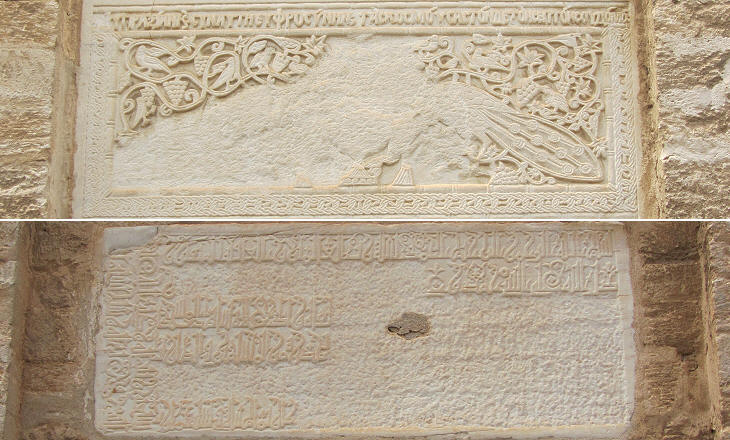 Outside the Great Mosque one can see pieces of ancient columns which were not utilized for the decoration of the interior, the access to which is not allowed to non-Muslims. Some of the small portals on the eastern side were decorated with ancient marble slabs, one of which retains (in part) its original relief and a Greek inscription. 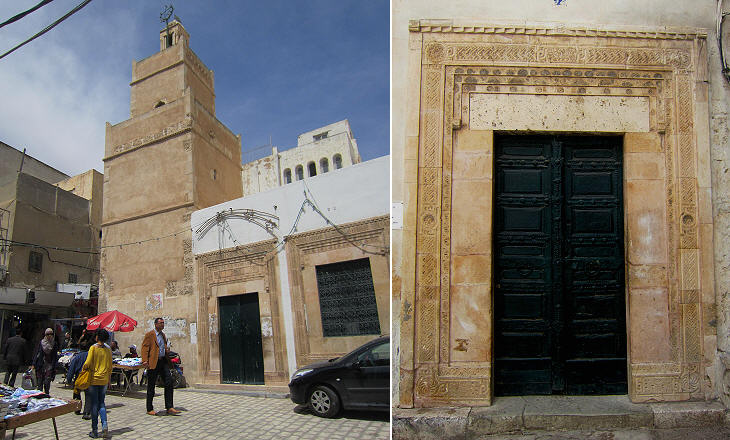 (left) A mosque near Bab ed-Diwan; (right) portal of a palace

A pink/yellowish stone from Gabes, a town south of Sfax, has been employed in many buildings of the medina. The stone can be carved to obtain elaborate and lasting decorations. The image used as background for this page shows a section of a portal made with this stone. (left) A vaulted passage having an ancient column on the left; (right) minaret of Sidi Ammar Kammoun Mosque (XVIIth century)

The medina of Sfax does not retain monuments of great interest, but it has not been defaced by new buildings or by the opening of large roads. Time seems to have stopped at 1881 when the French started to develop the new town near the harbour. 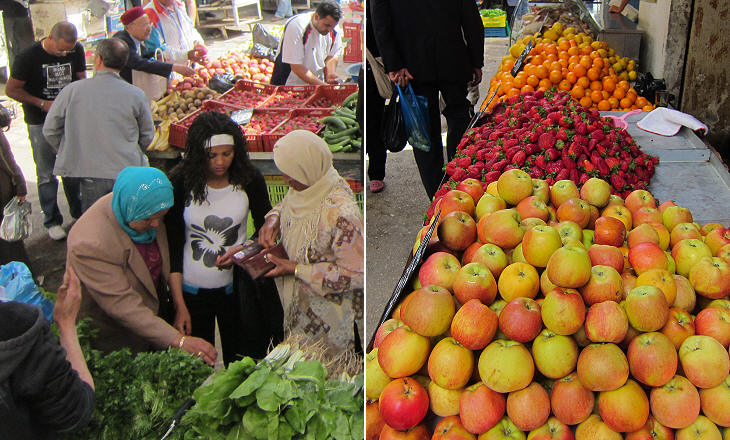 Fruit and vegetable market near Bab-el-Djebli (Gate of the Fields); see another image in the introductory page

Sfax, seen from out at sea, offers the aspect of an immense stronghold, immersed in a sea of greenery within which innumerable white spots can be seen, here and there punctuating the view. All these white points are actually summer houses built in the Arab style and located in beautiful gardens.
Fernand Lafitte and Jean Servonnet - The Gulf of Gabes in 1888.
Only one or two per cent of the current population of Sfax lives in the medina, but the traditional fruit and vegetable market which is held near the gate which gave access to the countryside is still very popular. The photo was taken at the end of April 2012 and strawberries were already ripe. 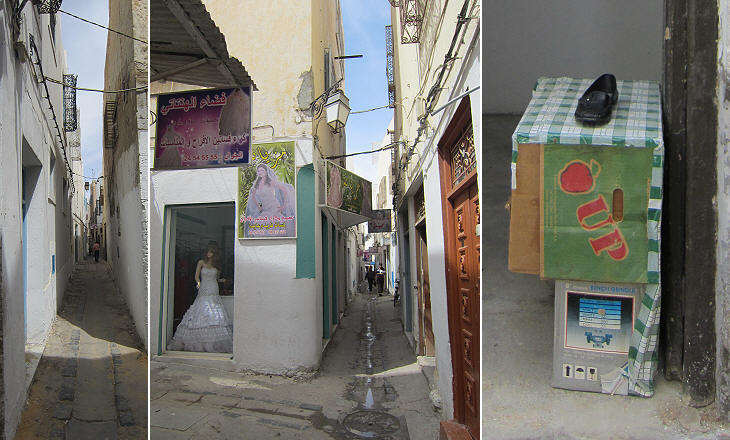 (left) A street of the medina; (centre) wedding dress shops; (right) shoes for not choosy customers

Other parts of the medina are quieter except for the low noise of small hammers. Sfax was known for manufacturing babouches (slippers having no heels). Today small family workshops in the medina make modern shoes on behalf of large manufacturers, but they are willing to sell a pair of them to casual customers. For this reason they place at the door the type of shoe which currently is being made. 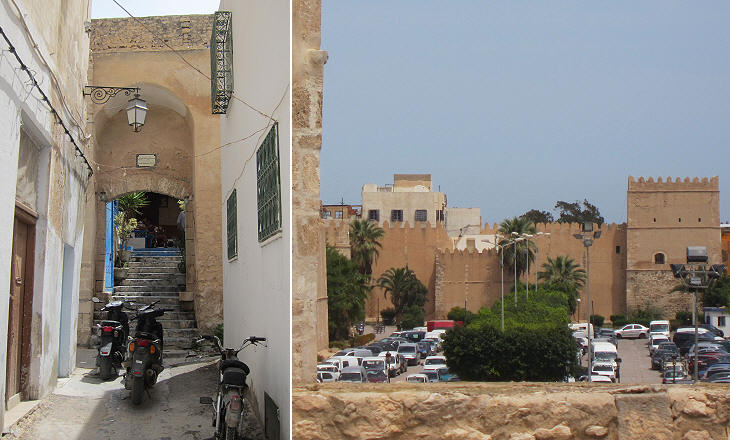 (left) Entrance to Diwan Cafè; (right) view of Borj el-Nar (a bastion) from the cafè terrace