Page revised in May 2020. The locations covered in this section were visited in April 2012.

- Monastir
(the Great Minaret at Kairouan)

Thomas Shaw, a British traveller who wrote Travels or Observations relating to several parts of Barbary and the Levant in 1738, although he suspected Monastir to have been of Carthaginian or Roman extraction was unable to associate it with a specific ancient town. In 1862 French archaeologist Victor Guérin came to the conclusion that Monastir stood on the ruins of Ruspina, the port where Julius Caesar landed in 47 BC and in the environs of which, at Thapsus, he fought against the supporters of Pompey. 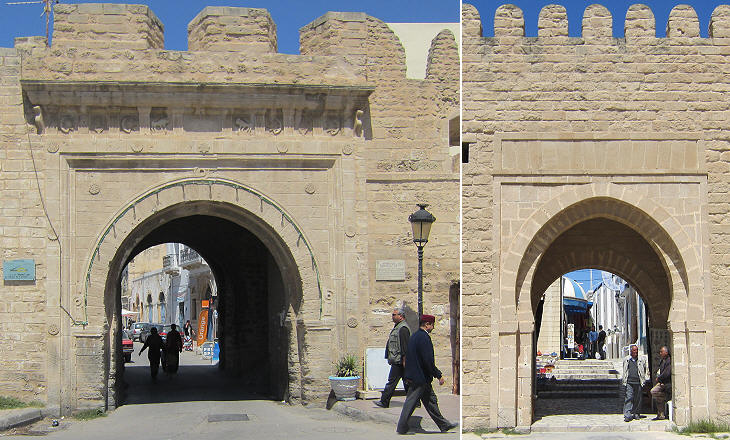 Gates of the medina

Monastir retains little evidence of its very ancient past and of the importance it acquired as a religious centre in the XIth century. Two factors have contributed to an excessive modernization of the medina, the walled town: a) the touristic development of the coast between Sousse and Mahdia (having at its centre Monastir) where a series of large holiday resorts have been built near its sandy beaches; b) the fact that President Habib Bourguiba, who ruled Tunisia from 1957 to 1987, was born at Monastir. With the aim of embellishing his birthplace he promoted the construction of modern buildings and roads which led to the demolition of one third of the walled town. 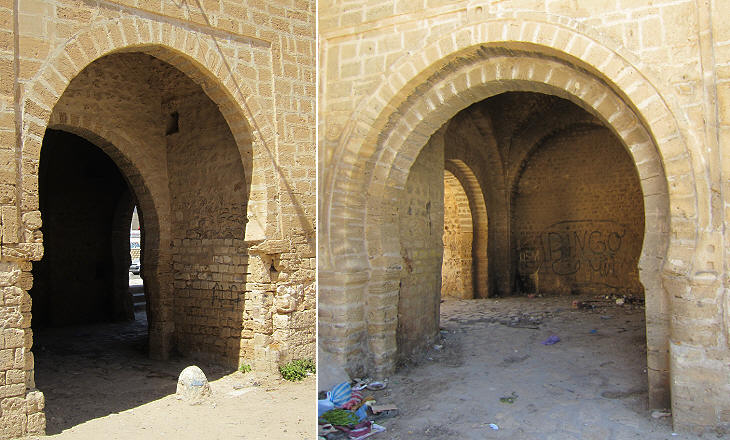 Bab al-Khoukha is the only gate which was not affected by the renovation promoted by President Bourguiba. Similar to Bab el-Jedid at Tunis it has the inner gate placed at an angle with the walls, a practice very common in medieval military architecture to make the access to the town more defendable. The walls which linked the medina to its harbour and fortress were pulled down and today the two are separated by a large alley. 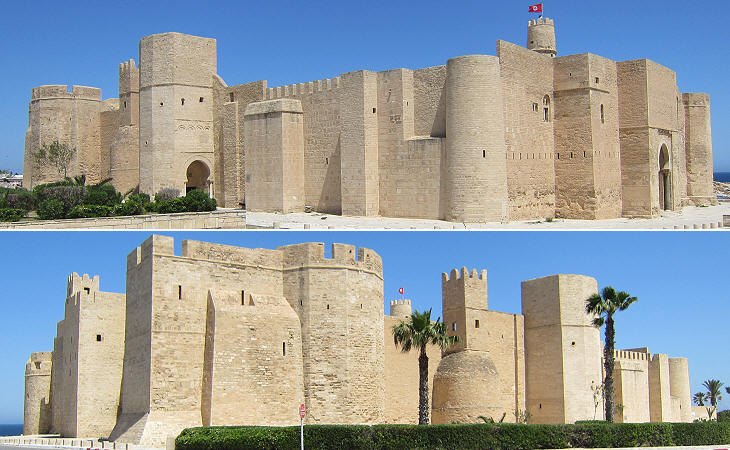 Views of the Kasbah

Kasbah is a citadel adjoining the walls and ribat is a monastery for religious warriors and a hostel for pilgrims to Mecca. At Monastir the Ribat is inside the Kasbah. Its round tower (with the red Tunisian flag) was built in 796 (see another image in the introductory page). The walls and towers of the Kasbah were added in the following centuries. Today the complex stands in isolation, as the old harbour which it protected has been turned into a marina for yachts. 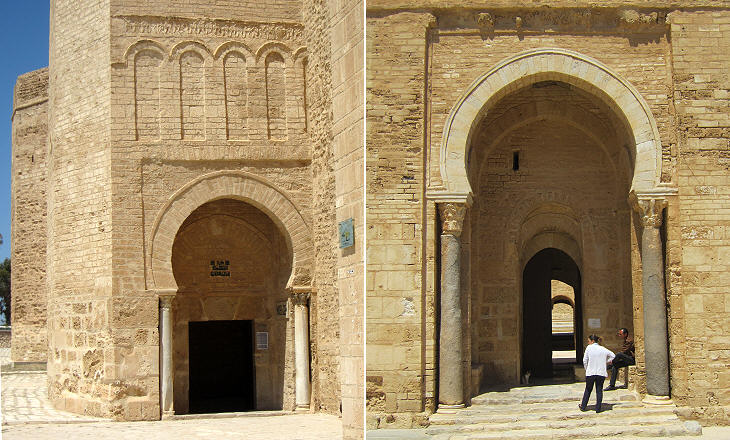 Gates of the Kasbah: (left) western gate: (right) gate opposite the Great Mosque (a detail of its decoration can be seen in the image used as background for this page)

The name of Monastir perhaps derives from Latin monasterium. When the Ribat was built Latin was still spoken by part of the population as the process of Arabisation of Tunisia was not completed until the XIth century when the Banu Hilal, an Arab nomadic tribe invaded the country and the XIIth century when the Almohads, a Moroccan dynasty, came into power in Tunisia. The religious warriors who lived in the Ribat were assimilated to the monks who lived in Christian monasteries. The complex was embellished with columns and capitals taken from ancient buildings. 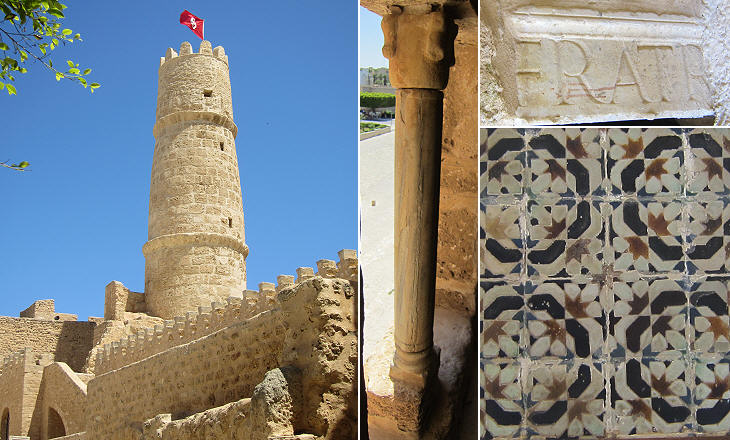 When the Arabs invaded the country in the VIIth century they founded Kairouan which became the main religious centre of Tunisia. In the Xth/XIth centuries however this role was taken over by Monastir. According to tradition spending three nights in its Ribat opened the gates of Heaven.
Monastir and its fortifications were conquered in 1148 by King Roger II of Sicily, but the attempt to found a Christian kingdom on the coast of Tunisia failed in 1160. In the XVIth century the town was involved in the conflict between a local dynasty supported by Emperor Charles V and the corsairs of Algiers supported by Sultan Suleyman I and for some time the Ribat housed a Spanish garrison. 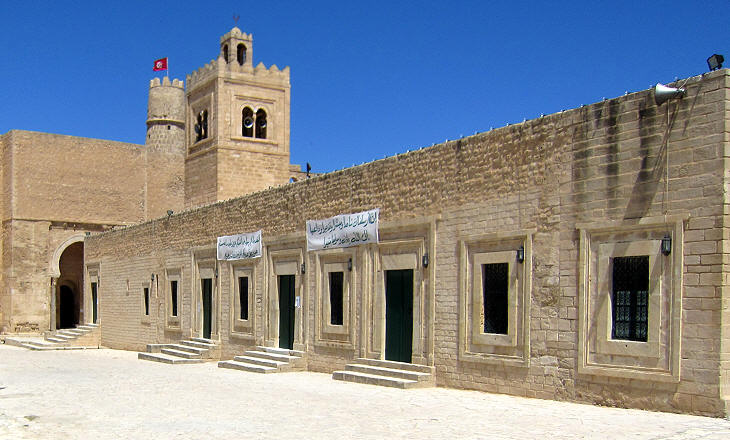 The Great Mosque is today completely isolated between a large esplanade and a busy coastal road. It has lost its role as the main mosque of the town after President Bourguiba built a new grand mosque named after him. To do so he pulled down part of the old town. The Great Mosque is not preceded by a large courtyard and it does not have any domes over the entrance to the prayer hall and the mihrab as it can be observed at Kairouan, Sousse and Tunis. 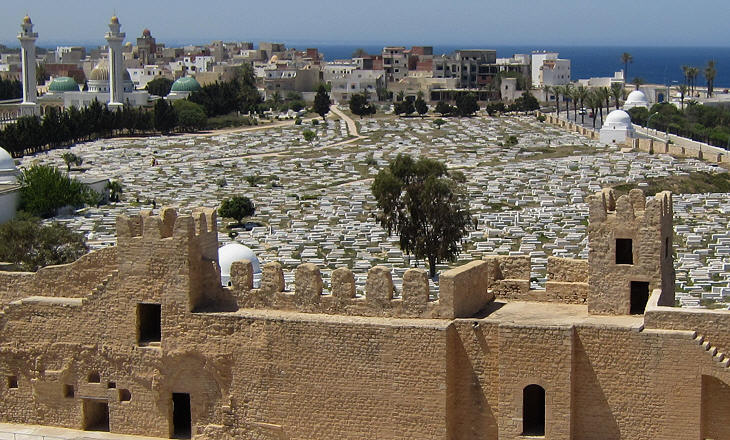 Nearby Mahdia is renowned for its untouched cemetery by the sea. That of Monastir is no longer on the coastline and it is surrounded by modern buildings, yet it is still worth going up the nador to view from this vantage point its graves aligned perpendicular to Mecca.
Ostentatious tombs are discouraged by Islamic funerary customs and grave markers should not exceed the height of a foot. For this reason the many mausoleums existing in the Muslim world which house the tombs of saints or rulers are always at risk of being demolished by strict followers of religious law, as it occurred at Timbuktu (Mali) in 2012.