- Sousse
(the Great Minaret at Kairouan) 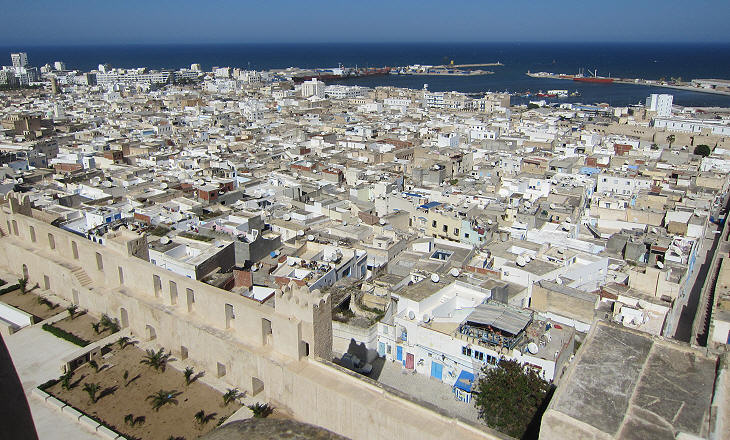 Early on the 9th we anchored off the town of Susa; (..) Susa, with its battlements, mosques, and batteries, as well as the houses, all painted of the most dazzling whiteness, and surrounded by plantations of olives and fruit-trees, presents from the sea a very gay and pretty aspect. (..) The remains of the ancient harbour or darsena are clearly traced under water, and several parts rise above its surface. (..) The existence of this port greatly tends to confirm me in placing Adrumetum at Susa.
Sir Grenville Temple - Excursions in the Mediterranean - 1835
Early XIXth century European travellers were in doubt whether Sousse were ancient Hadrumetum, the capital of Valeria Byzacena, a province created in Roman Africa by the territorial reforms introduced by Emperor Diocletian in 285-292. Today there is general consensus on identifying Sousse with Hadrumetum, although the ancient monuments of the latter have disappeared as they were utilized for the construction of the Great Mosque at Kairouan and mosques and fortresses at Sousse. 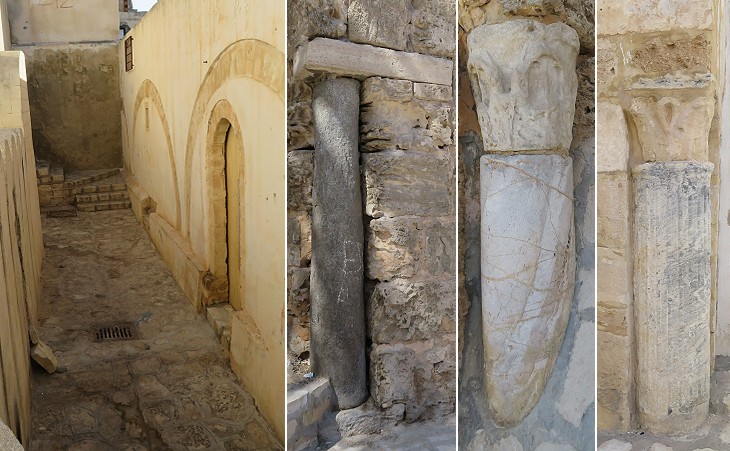 (left) Sofra Cistern, a Byzantine church in the higher part of the town which was turned into a cistern; (right) ancient columns in the walls and streets of Sousse

The several Parts which I have seen of This Province (Valeria Byzacena) fall vastly short, in Fertility, of the Character, which hath been attributed to It by the Antients. (..) At Susa are several Vaults, Granite Pillars, and other Tokens of It's having been formerly a Place of some Repute.
Thomas Shaw - Travels, or, observations relating to several parts of Barbary and the Levant - 1738
In different parts of the town are many columns and capitals, but no remains of consequence, if we except a large vaulted reservoir supported by pillars, and which still supplies the inhabitants with water. Temple
Hadrumetum was a very rich town because its province was extensively farmed and the Romans opened roads for the transportation of crops to its harbour. 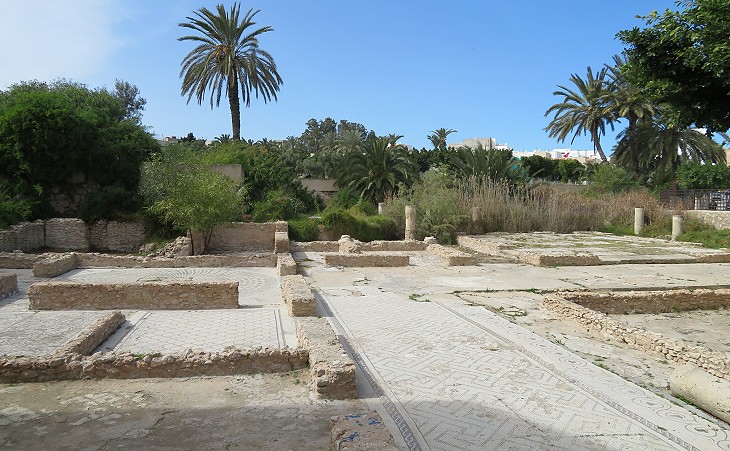 House of the Masks

The wealth of Hadrumetum is testified to by the many large houses which were found near the Arab town and in its environs. One of them is located at a walking distance from the south-western walls of the medina and it is almost the only Roman monument which can be visited, considering that the catacombs west of the town are usually closed. It was excavated in the 1960s and it is dated IIIrd century AD. 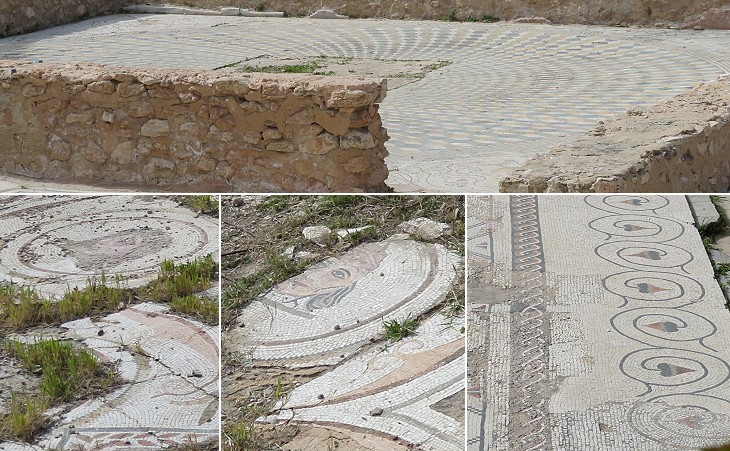 House of the Masks: (above) room of the main mosaic; (below) other floor mosaics including that after which the house is named

So many floor mosaics have been found near Sousse, that those which are not particularly remarkable for their subject or style are left to rot. Only the emblema, the central panel with figures, of a floor mosaic of this villa was restored and moved to the local museum. 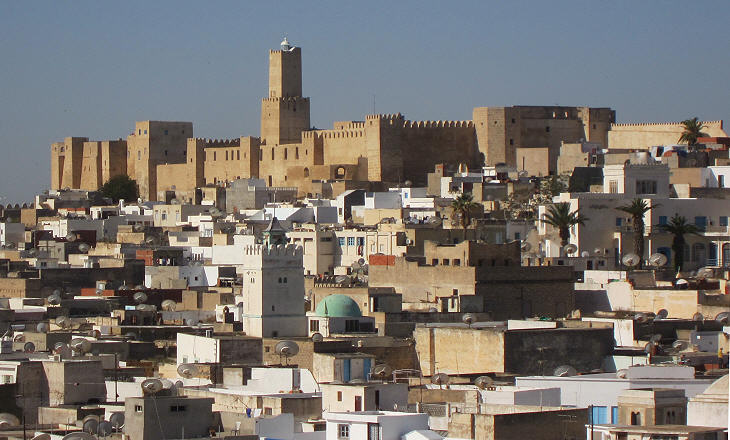 The Kasbah (citadel adjoining the walls) of Sousse was built between the XIth and the XVth centuries around an imposing tower built in 859. At that time Sousse was the main port of Tunisia and that from which supplies were shipped to the Arab army which had invaded Sicily in 827. The tower was a manar (beacon) from which signals were made to ships, to the population of the town and to inland watch towers. The tower resembles the minaret of the Great Mosque of Kairouan. 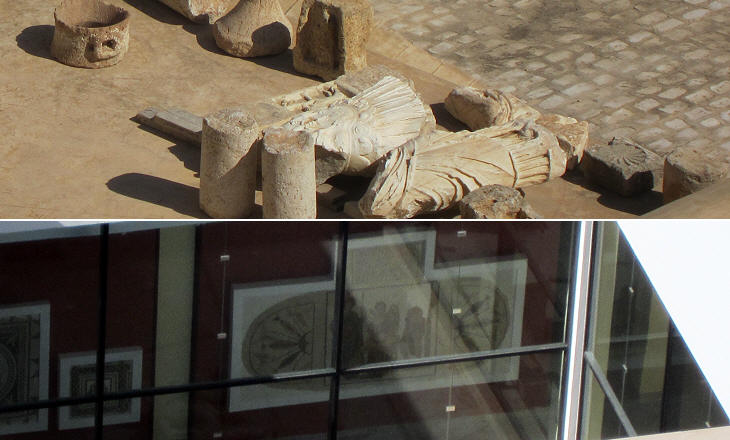 Archaeological Museum of Sousse seen from the Khalef Tower: (above) statues and millstones in the courtyard; (below) one of the new halls where mosaics are on display; the image shows one from Thysdrus

Today the Kasbah houses the Archaeological Museum of Sousse, the second largest one in Tunisia after the Museum of Bardo in Tunis. Of particular interest is the collection of Roman mosaics found in the environs of the town. The museum was founded in 1898 at the initiative of the local French authorities. It was reopened to the public in June 2012 after a thorough renovation. 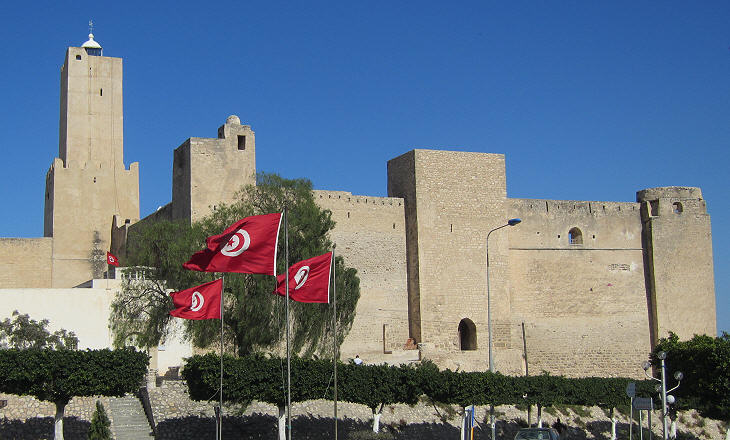 Kasbah and Khalef Tower seen from outside the town

In 1148 Sousse, as well as nearby Monastir and Mahdia, was conquered by Roger II, the Norman King of Sicily whose sovereignty was recognized by the local sheikhs. The Normans had already annexed Malta to their kingdom. The attempt to create a Christian Kingdom in Tunisia failed and by 1160 all the towns conquered by Roger II were lost. The Normans were supported in their attempt by small communities of Christians and by tribes which had resisted the process of Arabisation. The Normans were ousted from Tunisia by the Almohads, a Moroccan dynasty. The new rulers forced the Christians to convert to Islam and completely banished the use of a Latin-derived language, which was still spoken in some inland regions of Tunisia. 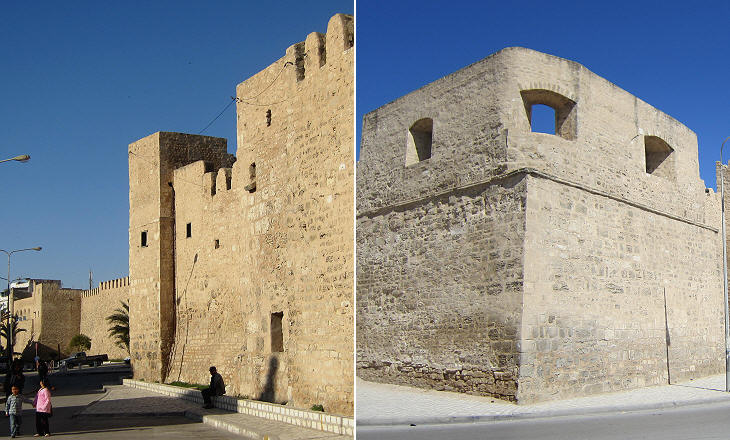 In 1534 Hayruddin Barbarossa, leader of the corsairs of Algiers, intervened in a dynastic quarrel between two brothers of the Hafsid family ruling Tunisia and he conquered Tunis in the name of Ottoman Sultan Suleyman I. In the following year the troops of Emperor Charles V seized Tunis where they reinstated Mulai Hassan, the Hafsid brother who had appealed to the emperor for help. In 1537 Charles V sent a naval expedition from Sicily against Sousse which refused to submit to Mulai Hassan. The Spaniards made a vigorous assault, but were obliged to retire. In 1539 another expedition was sent, commanded by Genoese Admiral Andrea Doria, with better success; but no sooner had he left than Sousse revolted again, and welcomed the Ottoman pirate Dragut within its walls.
The maritime walls of Sousse were strengthened by the addition of small bastions where artillery could be placed, but overall they retain a medieval aspect. 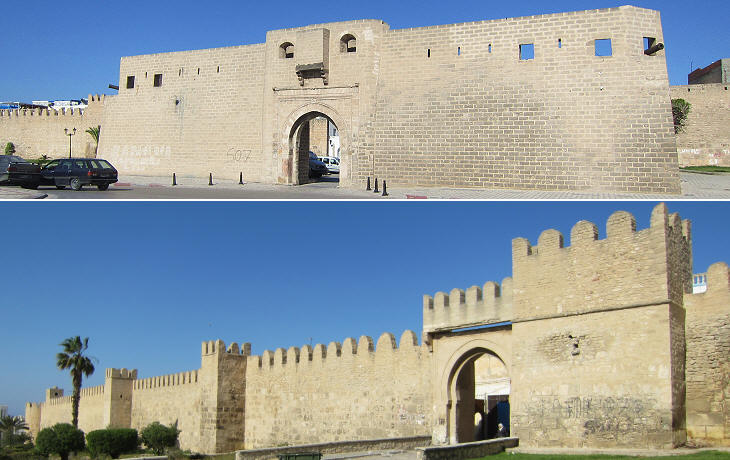 The medieval gates of Sousse did not give immediate access to the town; they were similar to Bab el-Jedid in Tunis where the internal gate and the external one are not aligned along the same axis. In the XIXth century they were modified to allow easier access to the town. 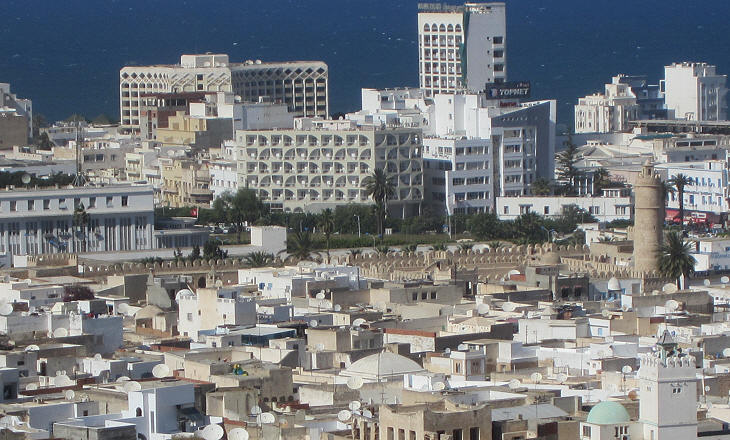 The ancient harbour was between the Quarantine Fort (Ribat) and Bab el-Bordj (a lost gate). The remains of the Roman breakwater may still be seen, but the accumulation of sand has rendered the water too shallow to permit vessels to make use of it. A great part of the ancient harbour is, in fact, now dry land. Some land has recently been recovered from the sea.
1895 Murray handbook for travellers in Tunisia and Algeria
Today the old harbour has completely disappeared and a modern quarter with large hotels has been built on land reclaimed from the sea. 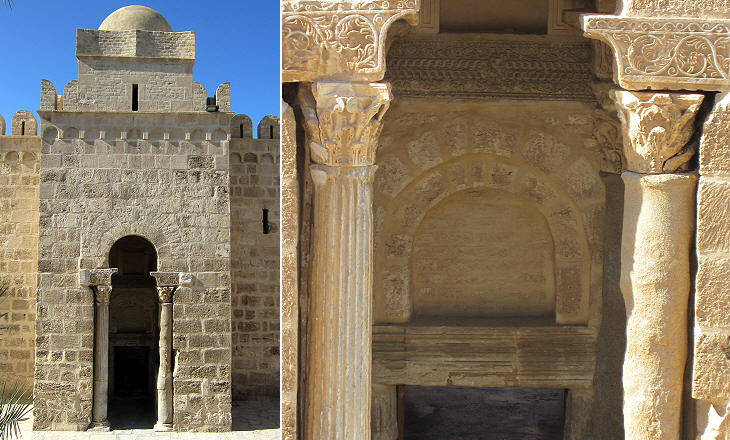 Entrance to the Ribat

Arabic ribat means a fortified enclosure for religious warriors and/or a hospice for pilgrims. They were initially built at the entrances to harbours to protect them from the Byzantines, then they became hostels for pilgrims en route to Egypt and Mecca (by sea, because the journey by land was very long).
The entrance to the Ribat of Sousse was embellished with columns, capitals and lintels taken from ancient buildings. 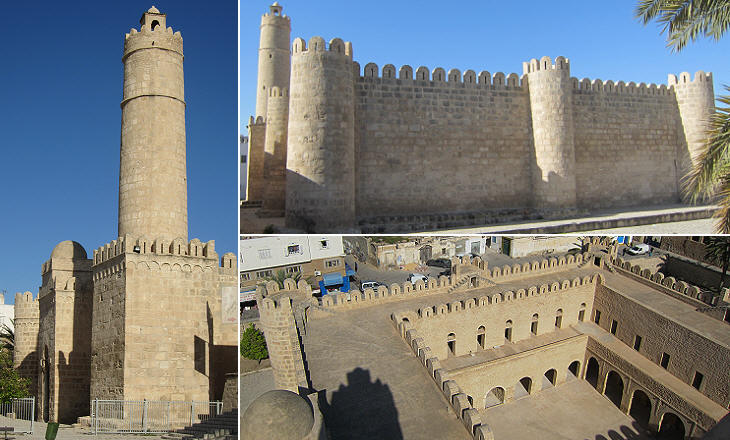 Views of the Ribat

The nador (lighthouse/watch tower) of the Ribat was located at the entrance to the old harbour. It was built in 821 and it is older than the rest of the complex, the interior of which has a large courtyard surrounded by cells which indicates the original purpose of the Ribat. It was used as a quarantine location by the French administration until a new harbour was built. 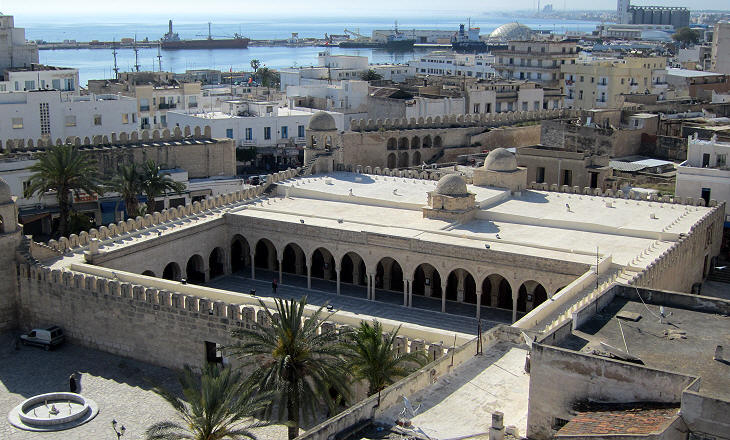 The Great Mosque is situated opposite the Ribat, but on the other side of the old harbour. It is surrounded by a high crenellated wall which was strengthened by two towers/minarets. The prayer hall, similar to what can be observed at other early mosques, such as that of Damascus, is wider than long and it has two small domes above the entrance to the prayer hall and the mihrab, as at Kairouan and Tunis.

Great Mosque: (left) tower/minaret; (centre) niche of the mihrab, indicating the direction to Mecca; (right) minbar, chair from which Friday sermons are delivered

Non-Muslims can access the courtyard, but cannot enter the prayer hall which consists of sixteen short naves supported by masonry pillars with a very limited number of ancient columns used for embellishment. 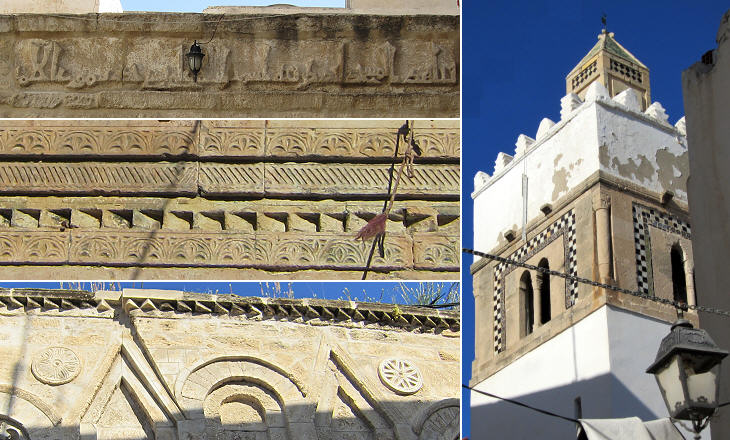 The Medina of Sousse with the Medina of Monastir, constitutes the unique prototype of military coastal architecture of the first centuries of Islam that has been passed down to us. Several monuments of the medina bear witness to this robust, ascetic and imposing architecture, notably the Ribat, the Great Mosque, the Bou Ftata Mosque, the Kasbah and the ramparts. (..) It also contains an ensemble of unique monuments dating from Aghlabid and Fatimid times, enabling study of the evolution of Islamic art in its first period. (..) This typology of architecture, which has become vulnerable through the impact of irreversible socio-economic changes and modern life, constitutes a precious heritage that must be safeguarded and protected.
From the UNESCO synthesis of the universal value of the Medina of Sousse which in 1988 was included in the World Heritage List. 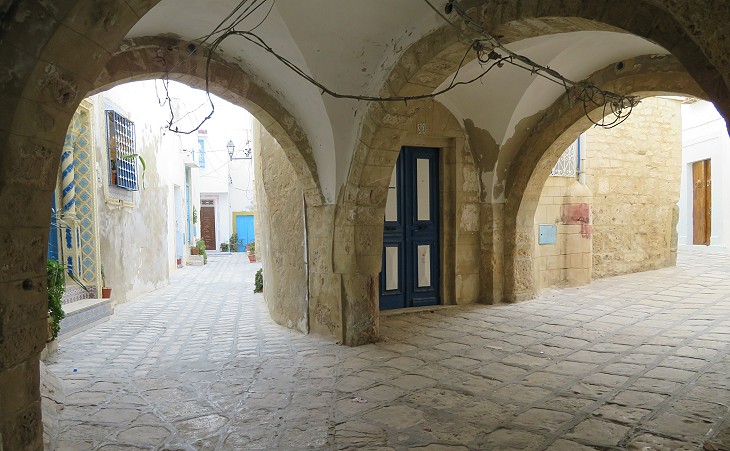 A quiet corner of the medina

Move to the Archaeological Museum of Sousse in a section covering the Roman towns of Tunisia or remain in this section and go to:
Introductory Page
Bizerte
Kairouan
Mahdia
Monastir
Sfax
Tunis
and An Excursion to La Goulette and Sidi Bou-Said