Page revised in December 2020. The locations covered in this section were visited in 2010, 2012 or 2013. The pages covering locations in Syria do not reflect the impact of the civil war.

in the Near East
(Castle of Marqab)

In 1071 Seljuk tribes defeated Byzantine Emperor Romanos IV at Manzikert in today's eastern Turkey and in the following years they conquered most of the Byzantine territories in Asia Minor, including Nicaea, which is not very far from Constantinople; in that same period the Seljuks invaded Syria and moved towards Egypt, which was ruled by the Fatimid Caliphate; in 1076 the Seljuks conquered Jerusalem; the Fatimids had pursued a policy of tolerance towards non Muslims and pilgrims to the Holy Land, whereas the Seljuk invasion was accompanied by pillage and slaughter.
A request for help from Byzantine Emperor Alexios I and the Seljuk vexations on pilgrims led Pope Urban II to call the First Crusade at the Council of Clermont in 1095.
The response was enthusiastic and went beyond expectations; Pope Urban II was by birth a French noble and he relied on the knights of his country to lead an army of professional soldiers, whereas an unexpected crowd of peasants gathered in Constantinople in the summer of 1096; the members of the so called "People's Crusade" were easily defeated and massacred by the Seljuks when they tried to attack Nicea.
In the following year the "professional" crusaders reached Constantinople and in May 1097 they laid siege to Nicea, but the Seljuks preferred to surrender the town to the Byzantines.

The crusaders marched almost unopposed through Asia Minor and entered Cilicia which at the time was partly controlled by Armenian noblemen; at this point Baldwin of Boulogne, one of the leaders, responded to a call for help from Thoros, ruler of Edessa (today's Sanliurfa) by whom he was adopted; soon after Thoros was assassinated and Baldwin established the County of Edessa, the first of the Crusader States.
The crusaders then laid siege to Antioch and eventually conquered the town; Bohemond of Taranto became the first ruler of the Principality of Antioch.
The advance of the crusaders towards Jerusalem did not meet strong resistance and in 1099 the siege of that city started; the year before Jerusalem had been retaken by the Fatimids, who perhaps did not dislike the idea of having a buffer state between them and the Seljuks; on 15 July 1099 Jerusalem fell and on July 22 Godfrey of Bouillon was acclaimed King of Jerusalem.
Raymond IV of Toulouse, another crusader leader, laid siege to Tripoli, an important port on the coast of Lebanon, to found another state in the region for himself; in 1109 the County of Tripoli, the fourth and last Crusader State was established.
The Kingdom of Cyprus can also be considered a Crusader State, as it was established as a consequence of the Third Crusade; the island was a Byzantine possession which was conquered by King Richard I Lionheart in 1191; a formal Kingdom of Cyprus ruled by the Lusignan family was recognized in the following years by Holy Roman Emperor Henry VI. 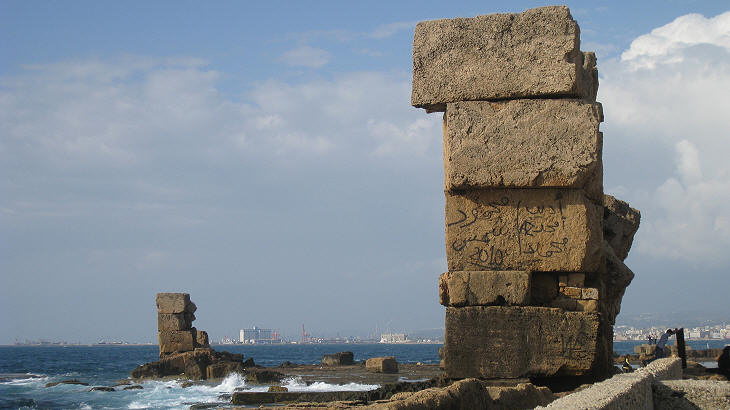 Phoenician Wall at Arwad, an islet opposite Tartous

The Crusader States controlled all the coastal strip of the Eastern Mediterranean Sea; in ancient times it was the land where the Phoenicians had established a strong maritime power and developed trade routes across the whole Mediterranean Sea. The European knights who were the ruling class of the Crusader States were unable to directly exploit the commercial potential of their possessions; the emerging Italian maritime republics (Amalfi, Pisa, Genoa and Venice) acquired trading posts in many ports along the coast. Over time Genoa and Venice established a sort of protectorate over the ports and intervened in the internal affairs of the Crusader States. A series of mountain ranges of which the highest ones are located in Lebanon provided the coastal strip with a natural defence; the crusaders built strong castles which controlled the passes to the coast; this section chiefly covers castles in today's Syria and Turkey which belonged to the County of Tripoli or to the Principality of Antioch, the border between the two states being approximately set near the castle of Marqab. The most impressive castles were built and defended by the Knights Templars or by the Knights Hospitallers, two military orders endorsed by the Catholic Church to support the Crusader States. 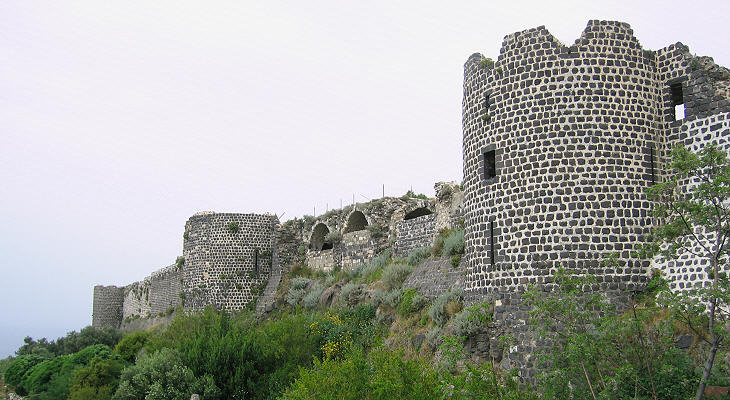 Castle of Marqab: western side of the walls

The Crusader States rarely acted as a sort of confederation; they often had dynastic disputes; occasionally they allied with Muslim principalities against another Christian nation. The Muslim effort to reconquer the region was initially led by the atabegs of Aleppo and then by Saladin who in 1187 retook Jerusalem; the Crusader States enjoyed a period of respite when the Mongols invaded the region; in 1260 however the Mongols were defeated by the Mamelukes who then turned their attention to the last remaining crusader possessions. In 1302, by capturing Arwad, the Mamelukes eradicated the Crusader States from Asian soil (with the exception of the Kingdom of Cyprus which was eventually conquered by the Ottomans in 1571).
The image used as background for this page shows a detail of the decoration of Krak des Chevaliers.