You may wish to see pages on the walls and the gates of the town first. 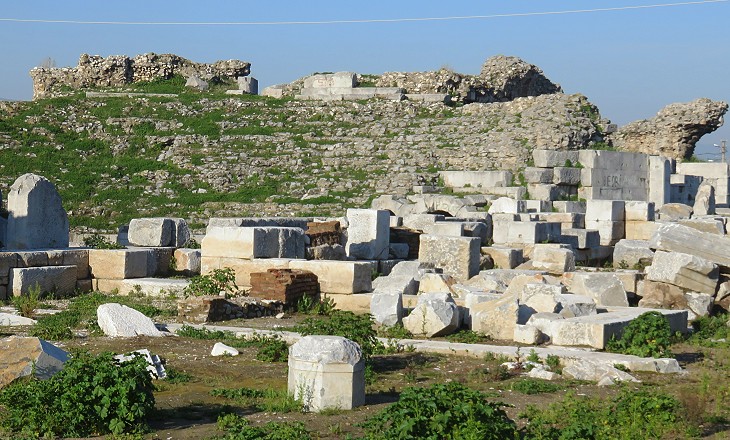 Prior to the reign of Trajan, Nicaea had gained a certain degree of magnificence. We learn from Pliny, that a theatre, or gymnasium, was begun at the expence of one hundred sesterces, that it was incomplete, and would require the emperor's assistance to finish it.
James Dallaway - Constantinople Ancient and Modern with Excursions to the Shores of the Islands of the Archipelago and to the Troas - 1797
Because the ground where the theatre was built is flat, the Romans had to construct imposing vaulted galleries to support the cavea, the seating section. Over the centuries the theatre became an open air quarry, but the site still retains some of the marbles with which its opus caementicium walls were faced. 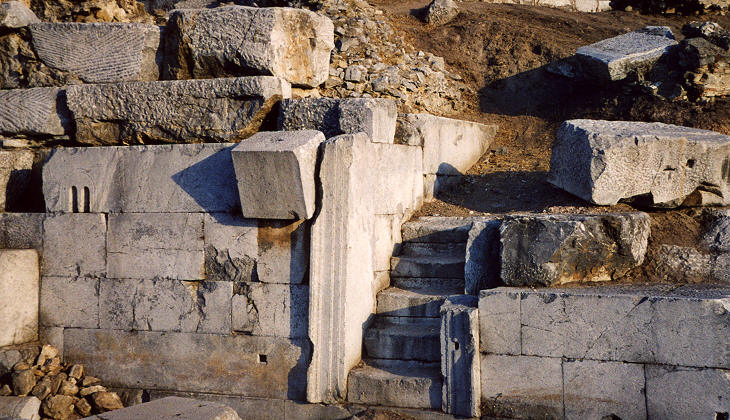 A detail of the Roman Theatre

In the midst of the half-buried ruins of the ancient city are some curious remains of an early Greek theatre. The avenues, out of which are large chambers or vaults, now all subterranean, are built of descending arches tending to a centre, probably at the area of the theatre. The workmanship is extremely good, and is colossal, the stones being some nine, and others fourteen, feet in length. Entering with lights, we saw that many of these chambers much resembled each other, and that they were all extremely perfect. We encountered thousands of bats, flying towards the entrance in a cloud; and as they rushed out we were obliged to crouch down, to prevent their striking our faces, or with the flapping of their wings extinguishing our candles.
Charles Fellows - Journal Written during an Excursion in Asia Minor in 1838 Archaeological Museum of Iznik (housed in an Ottoman imaret): sarcophagus with figures inside niches (of the Sidamara type), perhaps of the IVth/Vth century AD

When Pliny was invested with the government of this province, his attention was much engaged in public works. (..) In his letters to the emperor Trajan he frequently urges the completion of magnificent works under the imperial auspices, and demands that architects and superintendants should be sent from Rome, as competent persons were not to be found in the country. Dallaway
The theatre and the triumphal arches incorporated into the city gates are the only remaining Roman monuments of the town, but the first foreign travellers, as well as modern archaeologists, agree that the walls of the town were built with materials taken from ancient buildings. 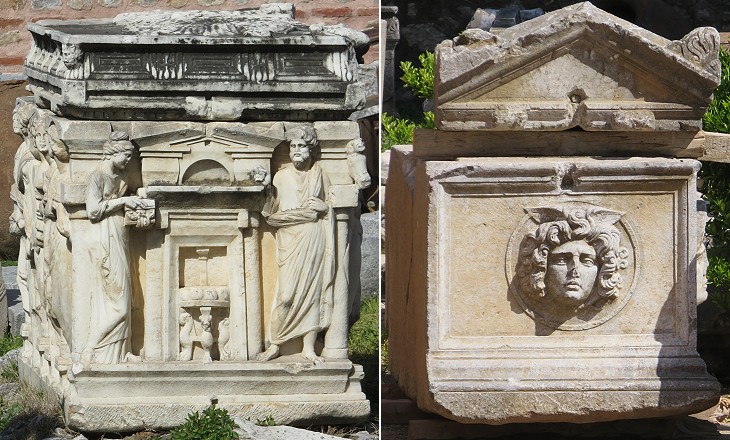 To the north of the town there are two marble coffins; one is of red and white spotted marble; the other has a Medusa's head at each end.
Richard Pococke - A Description of the East and Some Other Countries - 1745
The decisions of the Christian Byzantine emperors were implemented in an effective and thorough manner at Nicaea, because of its proximity to Constantinople. The decrees by Arcadius, Theodosius II and Justinian which were aimed at the eradication of paganism most likely caused the destruction of many ancient statues, including those of emperors, which no doubt decorated the Roman monuments of the town. 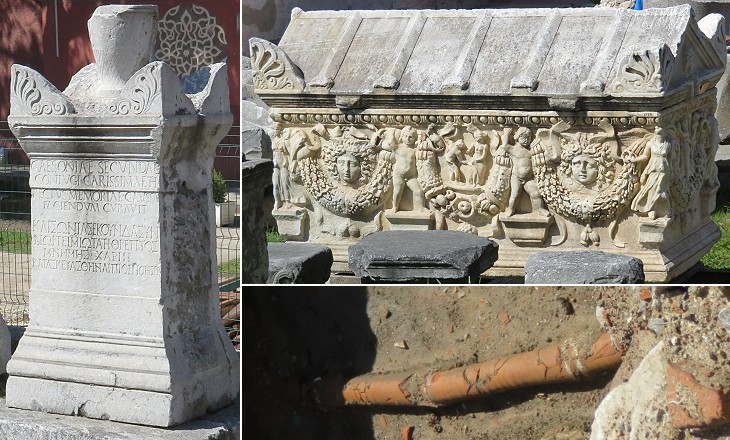 Roman Nicaea was a rich city. Most of the exhibits of its archaeological museum are related to sarcophagi and gravestones which were found outside the walls. Because the town is inhabited, only small areas within the walls have been excavated. Works to enlarge the museum by adding a new building in its rear garden were stopped because evidence was found of a Roman building, most likely baths.

The Greek church, where they say the council was held, is built of brick, and though it is old, yet I take it to be a later building than the time of Constantine. Pococke
We could not discover the site of the great church, which was rendered so famous for the two councils, but we examined the remaining part of another, the central dome of which is broken in, and exposed to the air. (..) After Constantine had embraced Christianity, Nicaea became the apostolic see; and his council held in 325 against the doctrine of Arius, and for the promulgation of a creed, is a memorable epoch of the Church. The second, assembled against the Iconoclasts in 787, was attended with as violent consequences. Dallaway 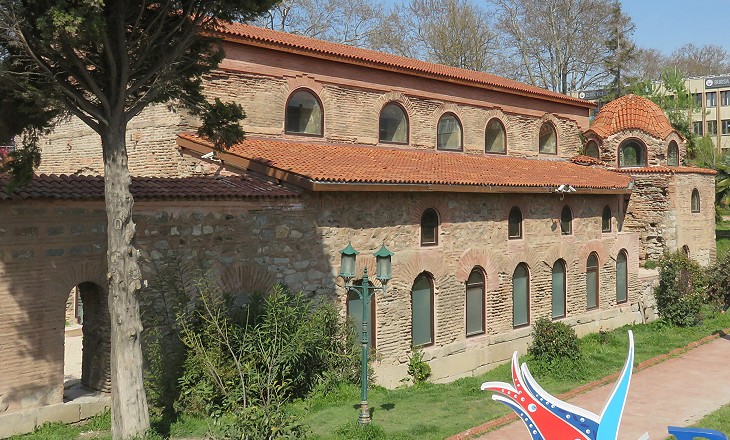 Nicaea played a significant role in the history of Christianity when in 325 and in 787 it housed two of the seven ecumenical councils recognized by all churches. The First Council condemned the doctrine of Arius of Alexandria who denied the full divinity of Jesus Christ, but his followers, who included also some of the barbarian tribes at the borders of the empire, did not accept the outcome of the Council.
Pococke ruled out that the building he saw could have housed the First Council. Dalloway looked for a very large church (of the size of Hagia Sophia in Constantinople) which he did not find. According to chronicles of the time some 300 bishops attended the First Council, a too large number for this building. Maybe the council was held in a lost imperial palace by the lake. 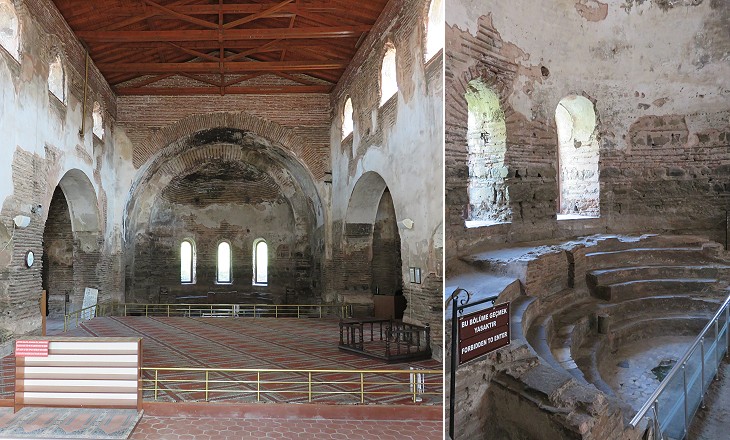 The cathedra or seat, and the semicircular steps at the end, are common in ancient cathedral churches, and these are very ill built; there are some remains both of the mosaic ceiling and pavement. Pococke
The Second Council dealt with the appropriateness of the use of sacred images in churches.
The Byzantine Empire was split between iconoclasts (breaker of images) and their opponents. Empress Irene, regent for her son Constantine VI, convened the Council to formally endorse the restoration of the adoration (not full worship) of sacred images. This view was supported by Pope Adrian I. Traditional depictions of the Second Council of Nicaea (see a fresco at Sumela) show the Emperor (and not the Empress) at the centre of a large gathering of bishops. 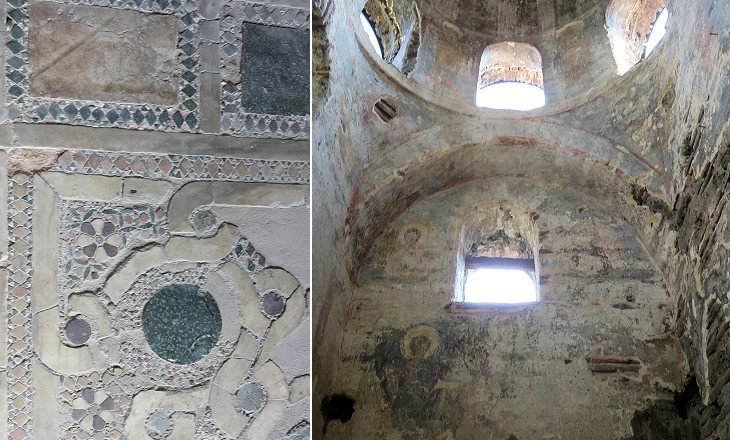 Hagia Sophia: (left) detail of the Cosmati-type pavement (another detail can be seen in the image used as background for this page); (right) frescoes in one of the side chapels

The pavement is of marble, bordured with tesserae, and the fractured cupola still exhibits whole figures of mosaic composed of a vitrified substance, and gilded, or of lively colours, representing saints. (..) The Nycaean dynasty was erected by Theodore Lascaris under the style first of despot and then of emperor, and he established his court here from 1204 to 1222. Dallaway
Some parts and decorations of the building are dated after 1064 when a severe earthquake struck Nicaea.
The church was the cathedral of the town and in the XIIIth century the Byzantine Emperors of Nicaea were crowned there. In 1331 Ottoman Sultan Orhan Gazi (the Victorious) conquered the town and turned its cathedral into a mosque. Today, after a long restoration, it is open to the public as a museum. 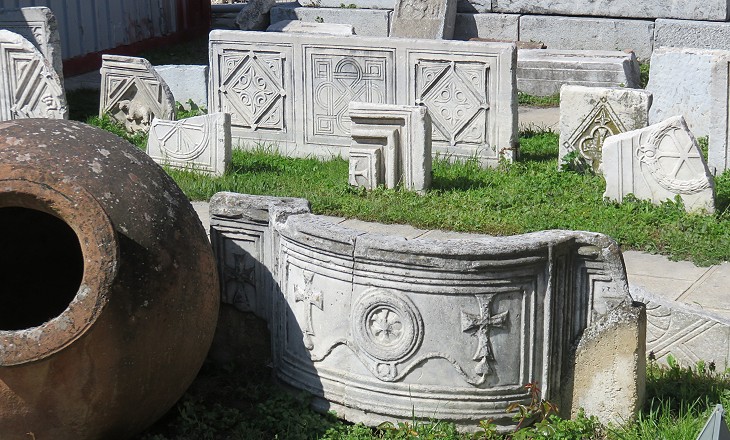 The Archaeological Museum houses a number of fine marble choir screens which indicate that Nicaea had many churches. These choir screens were made in Constantinople in the VIth/VIIth century and were exported to other cities of the Byzantine Empire, including Ephesus and Rome. 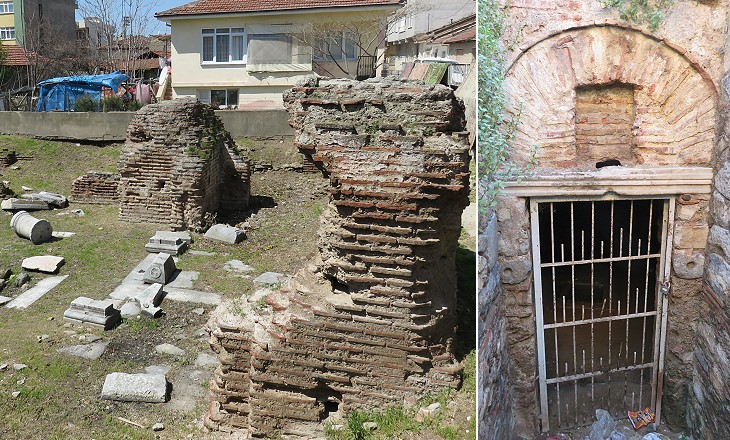 (left) Ruin of Koimesis Kilisesi, a church which was burnt down in 1922 during the War between Greeks and Turks for control of western Anatolia; (right) access to an underground Byzantine cistern

There are not more than twenty Christian families in the place, the greater part of which are Greeks. Pococke
A very small church still stands within the present town, which, from its mosaic floor and ceiling, may probably be of the date of St. Mark's at Venice, or rather of the Byzantine age. Fellows
The small community of Greeks living in Iznik gathered for ceremonies in the church of a monastery dedicated to the Koimesis (Dormition of the Virgin Mary). It was rebuilt after the 1064 earthquake and we know it was decorated with mosaics. Not far away an ancient underground cistern was used as a baptistery and regarded as an aghiasma or ayasma (holy spring).

Move to:
The Walls
The Gates
Ottoman Monuments