- Roman monuments
(inscription on a gate opposite Topkapi Sarayi)

You may wish to see an introductory page to this section first.
Istanbul retains no major evidence of its very ancient past when it was called Byzantium: we know that the acropolis was located on the hill at the tip of the peninsula, on the site of Topkapi Sarayi, the residence of the Sultans. A number of statues, gravestones and mosaics of that period can be seen in the Archaeological Museum in a section devoted to the history of the city.
In 193 AD Byzantium sided with Pescennius Niger, Roman governor of Syria, against Emperor Septimius Severus, who besieged the town: it was a long siege and when eventually the town fell it was razed to the ground. A few years later the emperor rebuilt it and gave it a new name Augusta Antonina, because Septimius Severus claimed to be the legitimate successor of Emperor Antoninus Pius. The new town was larger than the previous one and it rapidly grew again, owing to its excellent position on the trade routes between Europe and Asia and between the Mediterranean and the Black Seas.
In 324 Byzantium was again caught in the middle of a fight between two contenders for the Roman Empire; they were co-emperors and brothers-in-law, yet Constantine and Licinius did not refrain from involving large armies and fleets in a bloody civil war. Constantine won a great victory at Adrianople and Licinius retreated to Byzantium which he had to withdraw from when Crispus, Constantine's eldest son defeated his superior fleet. This time Byzantium did not pay a price for having been on the wrong side of the fight, because in 326 Constantine decided to move the capital of the Roman Empire there. Byzantium was renamed Nova Roma, but because Constantine had almost entirely rebuilt it, over time Constantinopolis (Constantinople) became the most used name. 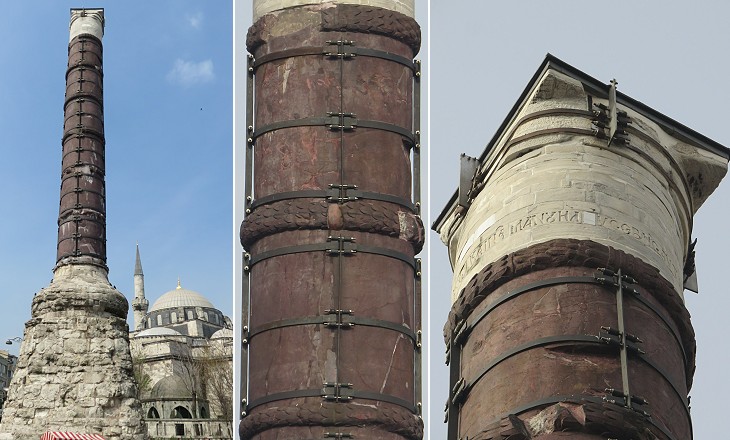 (left) Cemberlitas (Hooped Column) and Atik Ali Pacha Camii behind it; (centre) two of the porphyry drums; (right) masonry surrounding the remains of the seventh drum with an inscription celebrating a restoration made by Emperor Manuel I Komnenos in the XIIth century

Cemberlitas is a column erected by Constantine at the centre of his Forum (near today's Great Bazaar), similar to what Emperor Trajan had done in Rome. It celebrated the inauguration of the new capital of the empire which occurred on May 11, 330. The column was made up of ten or eleven porphyry drums: it supported a statue of the emperor. The iron hoops were added in the Vth century to improve its stability but the upper part of the column and the statue fell in 1106 during a storm. The pedestal was covered with a pyramidal masonry in 1779 to strengthen the structure of the monument. During the IIIrd century AD the Roman limes (fortified border) on the Danube River was crossed by nomadic tribes for the first time. In 267 the Heruli and the Goths sacked Byzantium and many other cities, including Athens. A column was erected to celebrate the decisive victory of Emperor Claudius II (268-270) against the Goths at Naissus (today's Nis in Serbia). It might have been built by Constantine who claimed to descend from that emperor in order to assert the legitimacy of his power.
The Column of Marcian was erected during the reign of that emperor (450-57) to celebrate not so much a victory on the battlefield, but his ability in preserving the city from being attacked by the Huns. This column is known in Turkish as the Kiztasi (Maiden's) Column because, according to one of many legends, it played a role in a ritual to establish whether a girl was a virgin. This is probably due to the existence in the same neighbourhood of a (lost) column to Venus (it makes more sense to believe that a goddess, rather than an emperor, had means to detect loss of innocence).
A column taller than that of Constantine was erected by Emperor Arcadius (395-408) to celebrate his achievements: it was decorated with reliefs in a spiral band similar to those which celebrated Trajan's victories in Dacia, but Arcadius never went to war: the reliefs celebrated the massacre of the Goths who lived in Constantinople in 400. Only parts of its base remain, after a still standing section of the column was demolished in 1715 because it was about to collapse. 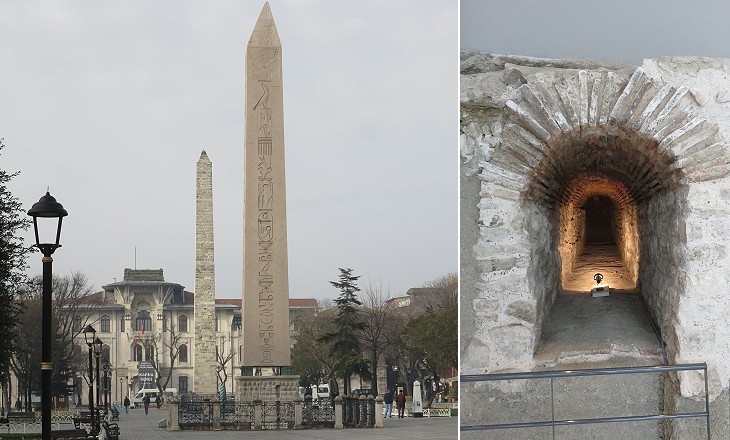 Constantine greatly enlarged a previous circus to give it a size comparable to that of Circus Maximus in Rome. The Hippodrome played a special role in the early days of Constantinople. Chariot races were very popular and large crowds gathered there. In 532 a major riot began in the Hippodrome as a quarrel between two groups of supporters (the Blues and the Greens). 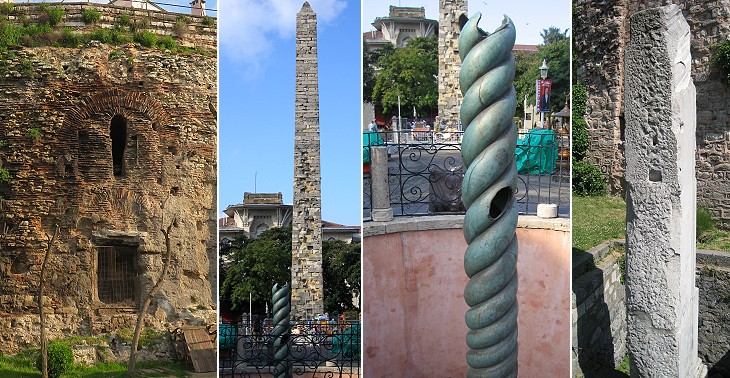 In order to enlarge the old circus the ground had to be levelled on its side towards the Sea of Marmara by erecting huge supporting walls. The Hippodrome was decorated with statues and other monuments.
A rather unrefined obelisk stands at the southern end of the race course; it is known by the name of Emperor Constantine VII Porphyrogenitus (913-59), because of an inscription at the base of the obelisk, but it is thought that he just restored the crumbling monument which most likely was erected by Constantine to mark the track turning point.
The Serpent Column was part of a tripod brought here from the sanctuary of Apollo in Delphi by Constantine. The tripod celebrated a victory of the Greeks over the Persians at Plataea in 479 BC. A bronze column ending with three heads of snakes supported a golden basin. But both Christians and Muslims did not like snakes (seen as a symbol of evil) and eventually the bronze snakes were decapitated (one head has been found and can be seen at the Istanbul Archaeological Museum).
In 20 BC Emperor Augustus erected a column in Foro Romano; it was called Miliarium Aureum because it served as the starting point for measuring the length of the roads leading to the main towns of the empire (it is now lost). In Constantinople this function was assigned to an arch (Milion) situated at the northern end of the Hippodrome; recent excavations have brought to light a long stone which is thought to have been part of that arch.

(left to right) Obelisk of Thutmose III; details of its hieroglyphics; relief portraying Emperor Theodosius I (379-95) offering a laurel wreath (above) and spectators and musicians with two water organs (below)

According to a traditional account Constantine brought this obelisk of Pharaoh Thutmose III to Constantinople, but Emperor Theodosius I actually placed it at the centre of the Hippodrome. According to another account the decision of embellishing the Hippodrome with an obelisk was made by Emperor Constantius II who at the same time shipped an obelisk of Pharaoh Thutmose IV (aka Lateran Obelisk) to Rome. For some reasons while the transport of the latter obelisk went smoothly, the obelisk for Constantinople was broken and it was not immediately erected (it is small because it is just the upper part of the original one). Finally a third account suggests that everything was done by Theodosius; this is in contrast with inscriptions in Latin and Greek which were placed at the base of the obelisk to celebrate the event: they emphasize the erection and not the transportation: strangely enough the Latin inscription says the erection required 30 days, whereas the Greek one says thirty-two.
The hieroglyphs are very fine, contrary to the rather still reliefs celebrating Theodosius. 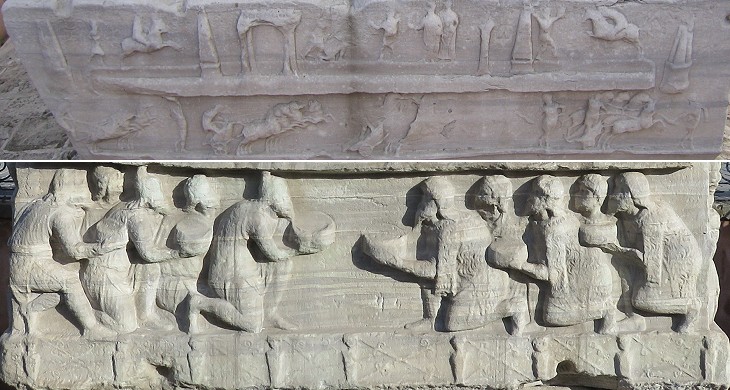 Reliefs on the base of the obelisk: (above) a race around the "spina", a strip at the centre of the Hippodrome ; (below) surrender of the Goths

One of the reliefs portrays some Goths on their knees and offering gifts. As a matter of fact it was Theodosius who made gifts to the Goths. He was appointed co-emperor after the death of Emperor Valens at the Battle of Adrianople in 378. His policy was to find an appeasement with the Goths who eventually were allowed to settle in various regions of the Balkans and to govern themselves. In 394 he did not hesitate to attack Eugenius and Arbogastes, respectively emperor and actual ruler of the western part of the empire, with an army mainly composed of Visigoths. He defeated his rivals at the Battle of the Frigidus (today Vipava River in Slovenia): he became the sole ruler of the empire, but he also paved the way for the invasion of Italy by the Visigoths in 410.
The threat of the Goths led to the construction of new walls to protect Constantinople (408-413). 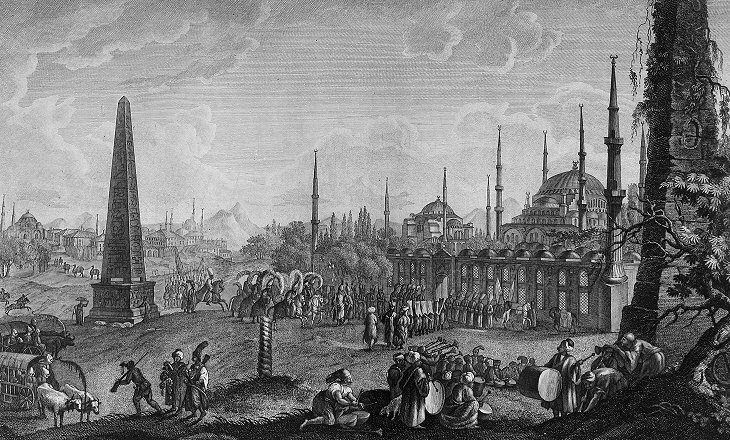 The Hippodrome in a Russian engraving based on a painting by Gavriil Sergeef (late XVIIIth century) (by courtesy of Andrey Spashchanskiy). It shows Sultan Ahmet Camii which was built in part over the eastern side of the Hippodrome

The image used as background for this page shows a relief of the obelisk portraying Emperor Theodosius and his court.

Aqueduct of Valens at Ataturk Bulvari

An extensive net of aqueducts provided the city with that ample supply that the Roman way of living required for baths, lavatories and fountains. Because the city was built on seven hills, aqueducts had to pass over many gaps; that between the third and the fourth hill is of a major dimension and it required the construction of many arches.
This aqueduct was completed in 368 by Emperor Valens to supply the imperial palaces. Damaged by earthquakes and storms it was always repaired. The lower arcade is made of large stones, whilst the upper one is made of lighter materials. 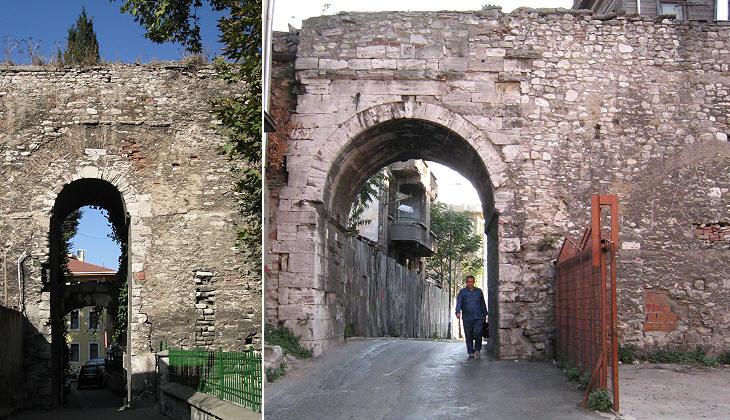 Sections of the aqueduct near Kalenderhane Camii

The same Aqueduct that was built by the Roman Emperors still supplies the inhabitants with water.
Edward Daniel Clarke - Travels in various Countries of Europe, Asia and Africa - 1810.
It is interesting to follow the aqueduct in its eastern section where it carried water to a Roman bath which was turned into a church and later on into a mosque (Kalenderhane Camii). Constantine built a cistern to supply water to the imperial palace. It was enlarged by Emperor Justinian (527-565). The cistern was built in the form of a subterranean basilica with 336 columns, for this reason it is called Yerebatan Sarayi (Undergound Palace). It was during the changes made by Justinian that two colossal heads of Medusa were employed as bases for columns. They most likely came from a temple to Apollo and they were placed in that position as an indication of the Emperor's contempt for the old religion. 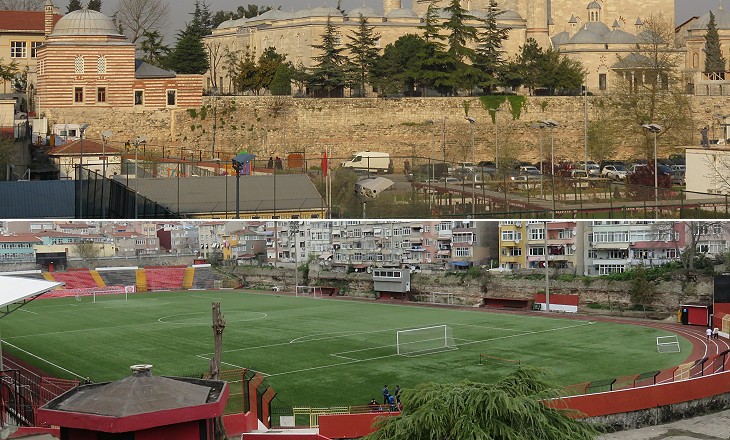 (above) Cistern of Aspar (near Sultan Selimi I Camii on the Fifth Hill); (below) Cistern of Aetios (near Edirne Kapi on the Sixth Hill)

Yerebatan Sarayi was not the only large cistern of Constantinople. Another underground cistern is situated not far away under Topkapi Sarayi. Other (open) cisterns were built in key positions to distribute water to a net of fountains. Today they house parking lots, children's playgrounds and even a small stadium.
Flavius Ardabur Aspar was a general of Gothic descent who played an influential role over the Eastern Roman Emperors between 430 and 471. Aetios was governor of the city in 421.

Forum of Theodosius: (left) discovery of a podium in 1950; (right) today with the addition of other remains

Divan Yolu, the most touristic street of modern Istanbul (inside the walls of the ancient city) follows the same route as Mese (middle) Road, the main artery of Roman Constantinople. In 1950, during excavations made to enlarge the street, remains of a small podium were found near Beyazit Medresesi. Other findings in the area included pieces of columns and fragments of a triumphal arch; they now have been assembled in a rather haphazard way along the pavement of the street. Recent archaeological findings: (left) a section of the walls built by Constantine at Yenikapi on the Sea of Marmara; (right) the Magnaura Palace which housed the Senate of the city opposite Hagia Sophia