- The Age of Suleyman
(inscription on a gate opposite Topkapi Sarayi)

The Moslem did not fail to fill the Capital with splendid mosques to celebrate the faith of Islam. (..) These great buildings are all much alike, and after a time become monotonous, and a great part of their charm arises from the beautiful faience which lines the walls. They are many of them designed by Sinan, who is said to have been an Armenian, or an Albanian, and it is not known that any Turk has been distinguished as an architect. It is, however, to these great marble mosques, with their swelling domes piled up in succession one above another, till the mighty central cupola is reached, soaring above the rest, that Constantinople is indebted for the magnificent and perhaps unrivalled picture she presents; and not the least of her beauties is the forest of graceful minarets that contrast so successfully with the domes, - surely one of the happiest conceptions of architecture.
Thomas Graham Jackson - Byzantine and Romanesque Architecture - 1913.
Suleymaniye Kulliye, the most imposing Ottoman monument of Constantinople was built between 1550 and 1557 by Sultan Suleyman. It was preceded and followed by the construction of many other buildings commissioned by members of his entourage: his chief consort Haseki Hurrem, his daughter Mihrimah, grand viziers, admirals and chief officers. The description of the monuments built during his long reign necessarily makes reference to the treachery and cruelty which characterized this "golden age". 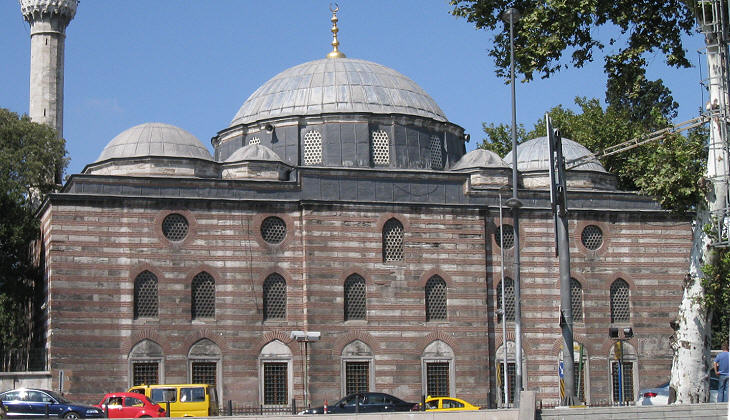 Sinanuddin Yusuf Pacha or abbreviated to Sinan Pacha was appointed Chief Admiral, although he was not familiar with making war at sea; he was however the brother of Grand Vizier Rustem Pacha, husband of Mihrimah, daughter of Suleyman. The actual command of the fleet was entrusted to Turgut Reis, a very experienced assistant to Hayreddin Barbarossa. Sinan Pacha, perhaps to gain the favour of his sailors, commissioned Mimar Sinan (the chief architect at the Sultan's court) a mosque near that Barbarossa's turbe, as if to establish a link between himself and that popular hero.
Sinan Pacha was aware that his career was due to his brother and his sister-in-law and he left them his fortune, at a time (end of 1553) they needed it, because their lucky star was temporarily obscured. 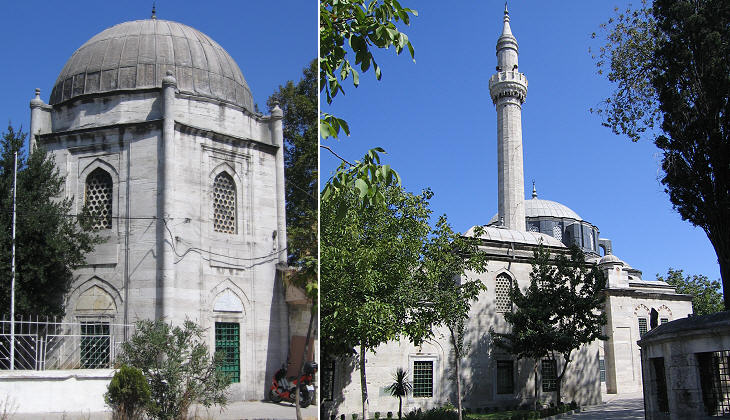 In 1553 Sultan Suleyman had four adult sons; Mustafa was the eldest one and the apparent heir as he had been appointed governor of Amasya; his mother was Gulbahar (Rose of Spring) Sultan, a consort Suleyman had been very fond of before knowing Roxelana/Haseki Hurrem. The latter with the help of her daughter Mihrimah and of her son-in-law Rustem Pacha manoeuvred to convince Suleyman that Mustafa was planning to oust him from power. While preparing a campaign against Persia Suleyman summoned Mustafa to his camp near Eregli; once the prince entered the tent he was assaulted by the guards and killed before his father's eyes. There were revolts at Amasya and in other parts of Anatolia; the soldiers regarded the execution of Mustafa as unfair; Suleyman was forced to dismiss Rustem Pacha and to appoint a new Grand Vizier; his choice fell on Kara Ahmet Pacha, husband of the Sultan' sister Fatma, who was highly respected by the army.

Kara means "black/dark", probably a reference to Ahmet's complexion, but also "unlucky" and that too applies to Ahmet, because he was executed less than two years after having been appointed Grand Vizier; the trio, Haseki Hurrem, Mihrimah and Rustem Pacha, managed to persuade Suleyman that Ahmet was responsible for some wrongdoings in the administration of Egypt; the Grand Vizier did not see the completion of the large complex he had commissioned Sinan.
The complex is situated near Top Kapi and it has a very large courtyard surrounded by medrese cells. 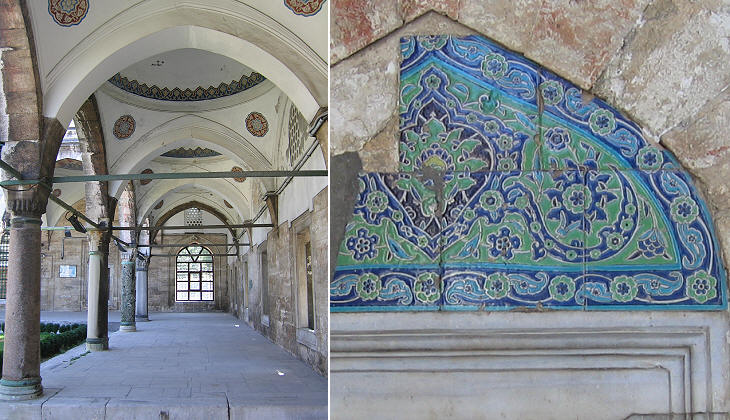 The porch is decorated with ancient columns and tiles known as "cuerda seca" (literally dry cord); this is a Spanish term used to design a procedure for making tiles which was developed by the Arabs: it is characterized by lines of special manganese paint. These partition the tile surface to prevent glazes of different colours from mixing. In Constantinople these tiles can be identified by the presence of green and yellow in addition to the traditional blue colours which prevailed in the Iznik type. It was introduced in Constantinople by the Jews who were expelled from Spain. 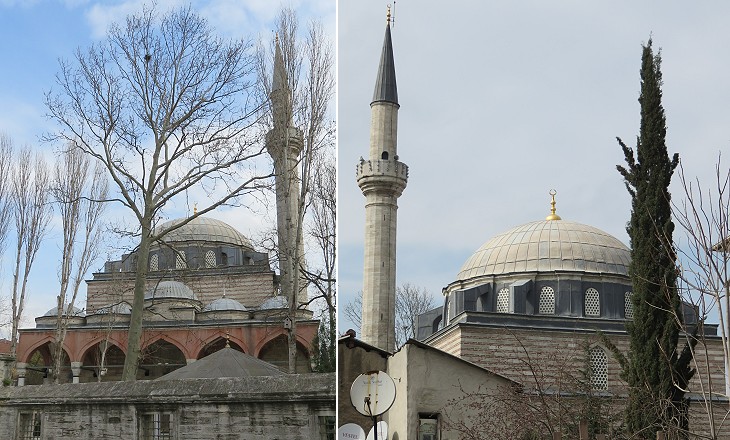 Hadim (eunuch) Ibrahim Pacha never reached the rank of Grand Vizier, but in his capacity of Chief White Eunuch of the Harem, he enjoyed the trust of Suleyman and Haseki Hurrem. Two months after the execution of Mustafa the couple feared that Sehzade Mehmet, Mustafa's six year old son, could be acclaimed sultan by the soldiers loyal to his father. Hadim Ibrahim Pacha was sent to Bursa (where Mustafa had been laid to rest) to personally strangle Sehzade Mehmet. 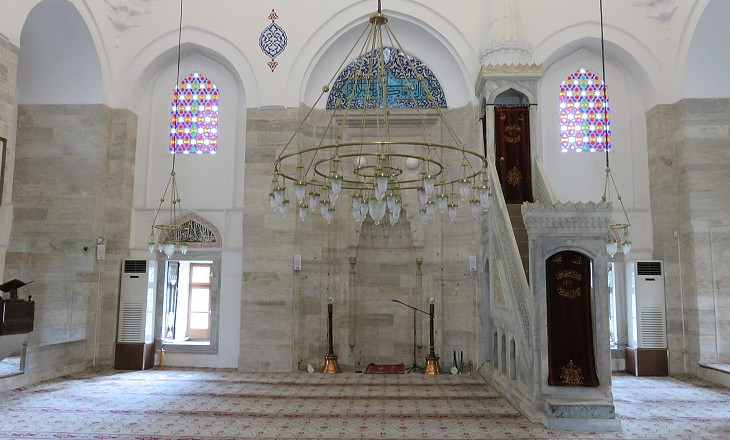 In 1551 Hadim Ibrahim Pacha commissioned Mimar Sinan a small kulliye near Silivri Kapi on the Seventh Hill. It included a hammam and a mektep, an elementary school, which are lost. The location of this complex in a neighbourhood where the population was predominantly Christian, shows his desire to promote Islam.
Today the mosque is surrounded by a small cemetery and, being built on slightly higher ground, it has a very evocative aspect. 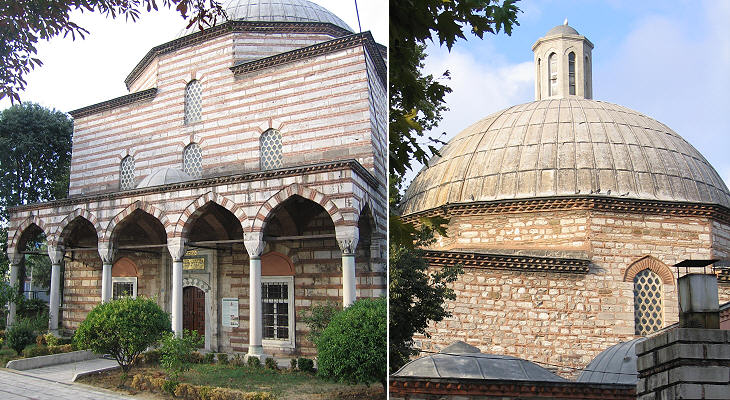 Haseki Hurrem commissioned Sinan the construction of a hammam near Hagia Sophia; it is a very elegant building which was completed just before her death in 1558. She had ensured Suleyman's heir would be one of his sons, but at the time of her death Suleyman had not yet made his final choice. Mimar Sinan was not only a great architect, but also a man with many diplomatic skills; due to his position he was very close to Suleyman and his entourage, but he managed not to be associated too strictly with any member of the family or key officer. 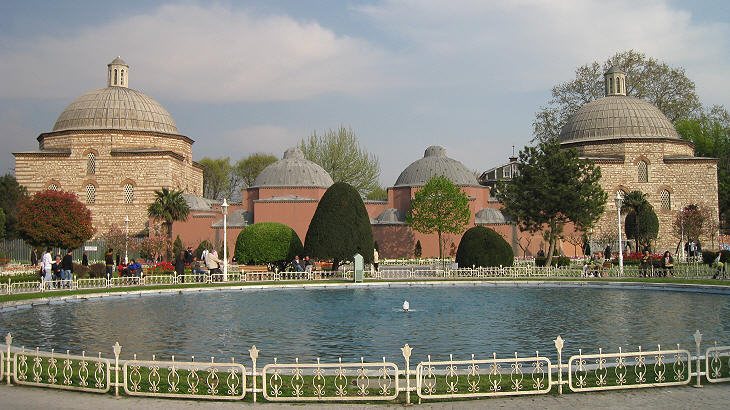 Some think that in the Muslim world women are not regarded as equal to men; they might change their opinion after seeing this work by Mimar Sinan (the two domes are not identical because perfect symmetry should be reserved to God). 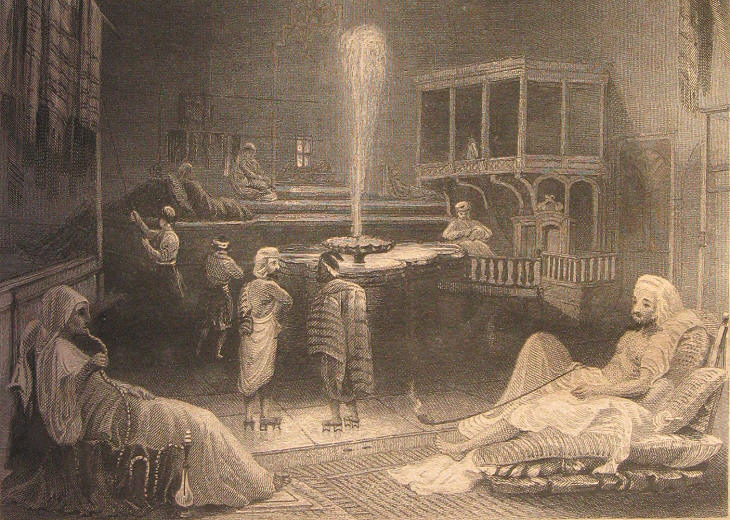 Etching by W. H. Bartlett (1809-1854) showing the cold room of a hammam; bathers wear "takatuka" the clogs used in hammams to avoid slipping

The use of baths in Turkey resembles the lustrations of the ancients, and is widely different from our idea confined to total or partial immersion. As their construction is seldom varied, it is the more easy to give a succinct account of them, and the mode of administering a luxury so contributory to happiness and health. Two rooms of competent size are covered with domes, thickly studded with small hemispherical glasses, which admit a dim light. The first serves as a vestibule and dressing room, and that beyond it is heated by concealed stoves as a sudatory; in the middle is placed a marble slab, upon which the bather is seated, whilst two men with perfumed soap, and a strigil of camel's hair cloth (such as the ancients used) fixed to their hands, perform a complete ablution. They knead the muscles, and give pliancy to the joints, by snapping them with the force of an electrical shock; but the whole operation is conducted with the most scrupulous neatness and decorum. After bathing it is customary to go into an adjoining room, like a coffee-house, excepting that beds are prepared in rows, where an hour is spent, coffee and pipes of tobacco are given, and it is then judged safe to encounter the open air. For all this accommodation not more than a piastre (twenty pence) is required, even from a Frank visitor.
James Dallaway - Constantinople Ancient and Modern with Excursions to the Shores of the Islands of the Archipelago and to the Troas - 1797 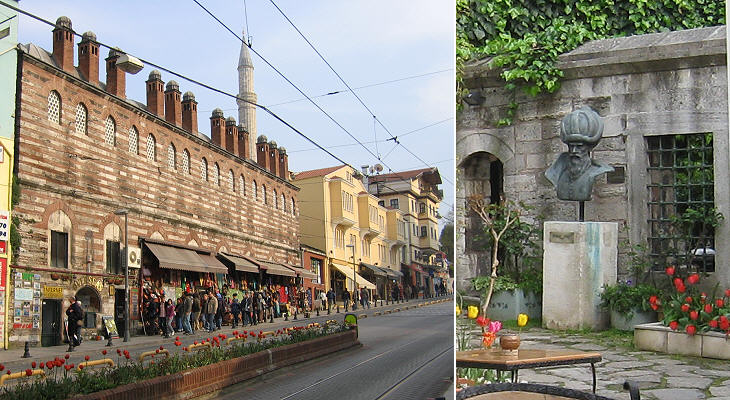 Even a finely designed building loses its interest when it is too much adapted to the needs of business. In 1559 Sinan designed a medrese for Cafer Aga, the Chief Black Eunuch. It is today located along a very commercial street and shops have been opened in its structure. 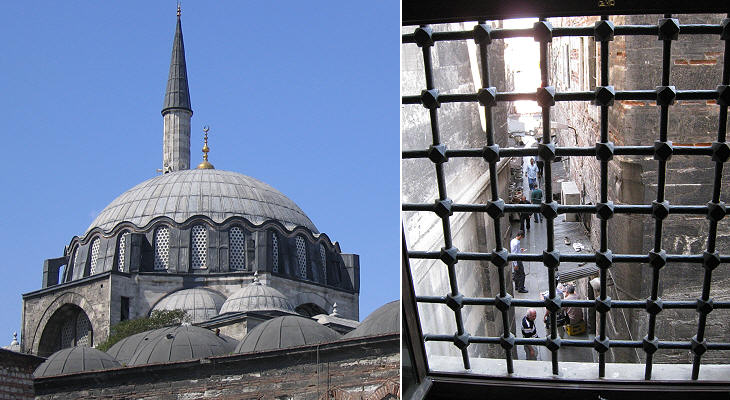 Sinan started working on the kulliye commissioned by Suleyman in 1550; the mosque was completed in 1557; the completion of the complex required a few more years. From its location at the top of the Third Hill, Suleymaniye Kulliye dominated the skyline of Constantinople. When Rustem Pacha, who was again Grand Vizier, decided to commission his own mosque he was careful not to offend Suleyman by building something which could be seen as too imposing for a humble servant of the Sultan. He therefore chose a location at the foot of the Third Hill between this and the Golden Horn.
The area was and still is a busy marketplace; Sinan built the mosque on a terrace above a covered bazaar: the rent from the shops was used to maintain the mosque. 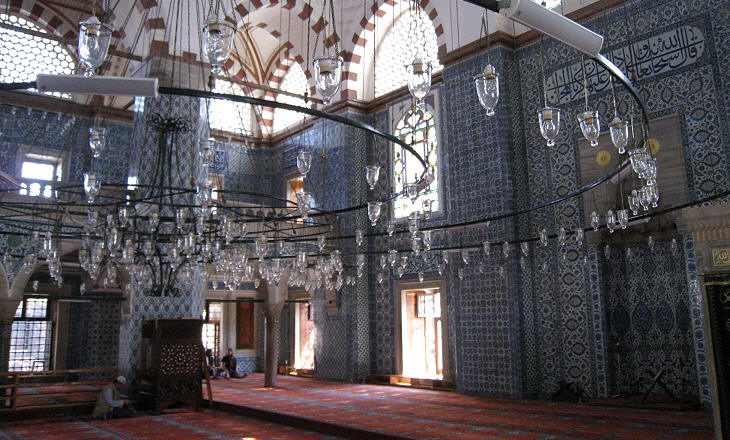 The interior of the mosque is striking; because it is not an extremely large building one can appreciate the tiles which decorate it both in their overall effect and in their details. The tiles are characterized by the use of red with the traditional blue; the red came from a type of clay (bole) found in Armenia; for this reason these tiles are called "Armenian boles". The image used as background for this page shows another detail of the tile decoration. Other examples of tiles with Armenian boles can be seen in the museums of Kutahya and Antalya. 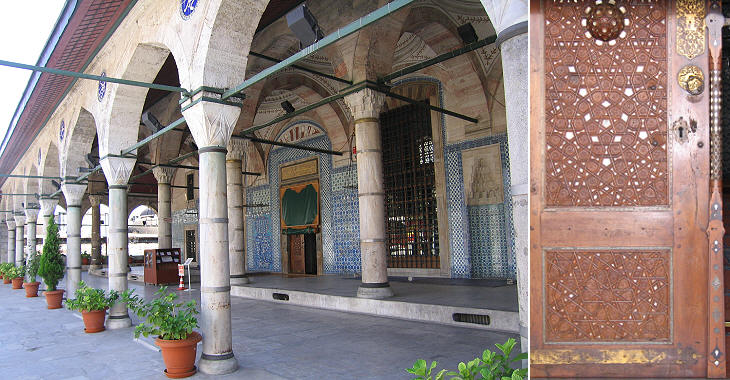 Rustem Pacha died without seeing the completion of his mosque and the end of the fight for the succession between Suleyman's two remaining sons: Selim and Beyazit. In 1559 their rivalry broke out in a civil war and Beyazit sought refuge in Persia. 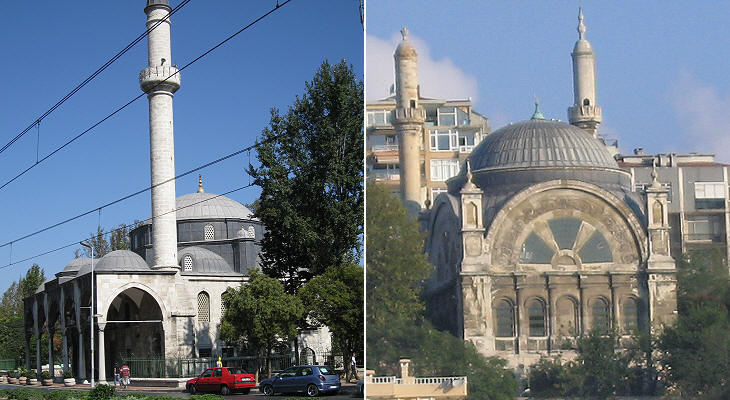 At the time of the execution of Mustafa, Suleyman had three remaining adult sons: Selim, Cihangir and Beyazit. Cihangir was a hunchback and this prevented him from aspiring to the throne; because of this he had no reasons to hate Mustafa and was very affectionate to him; he died shortly after having learnt about the execution of his stepbrother; according to the traditional account because of the grief caused by that event. Suleyman commissioned a mosque to celebrate him; it was rather small and in a peripheral location (a hill overlooking the Bosporus); the original mosque was designed by Sinan, but the current building is modern. Today Cihangir is the name given to the neighbourhood surrounding the mosque; it is widely known for having been described in his novels by Orhan Pamuk, 2006 Nobel Prize in Literature.
Not very far from Cihangir Camii, but on the Bosporus shore, Sinan designed another mosque for Mehmet, a Kadiasker (kadi=chief asker=soldier) who is however better known as a poet/savant: the building is called Molla Celebi Camii; Molla means mullah and also high-ranking kadi; Celebi means prince and is a generic title of respect. 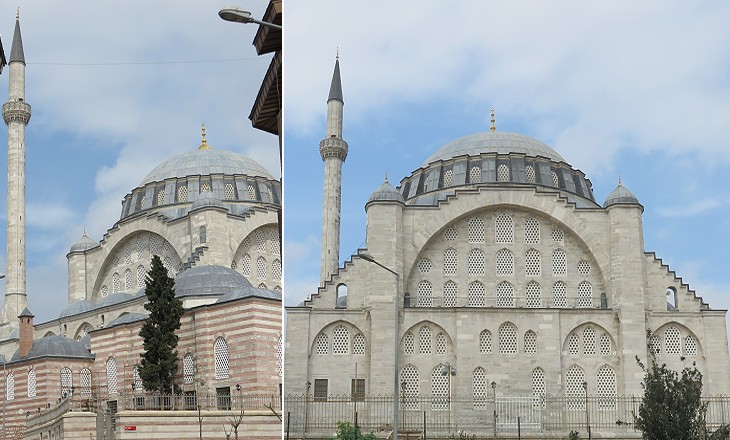 Mihrimah supported Selim as heir to Suleyman; he was the least capable of her brothers and was known for being a drunkard and for lacking leadership skills; probably she supported him exactly for this reason. In 1561 Suleyman convinced the Persian Shah to execute Beyazit and his four sons. The unlucky prince had a fifth son he had not brought with him; by order of Suleyman this child (aged three) was also executed.
Mihrimah enjoyed her father's trust until he died in 1566 and then she retained a great influence over her brother Sultan Selim II.
In 1565 she commissioned Sinan a mosque at Edirne Kapi. It was the second mosque the great architect built for the princess because one of his first works was Mihrimah Camii at Uskudar. 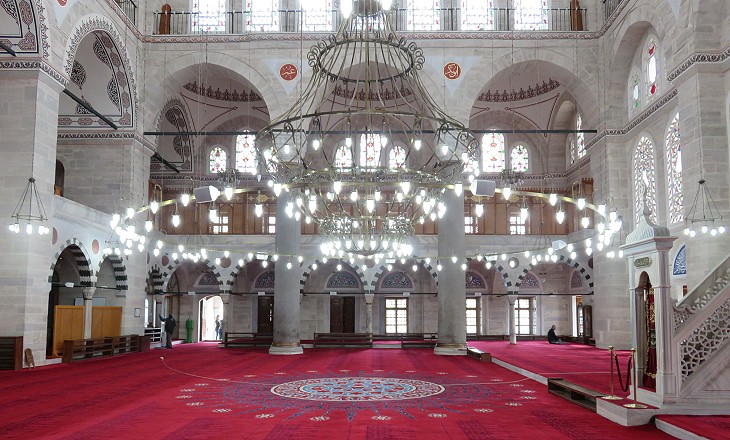 Sinan experimented with a new design which allowed for large windows. Its positive effects are immediately visible when visiting the interior. 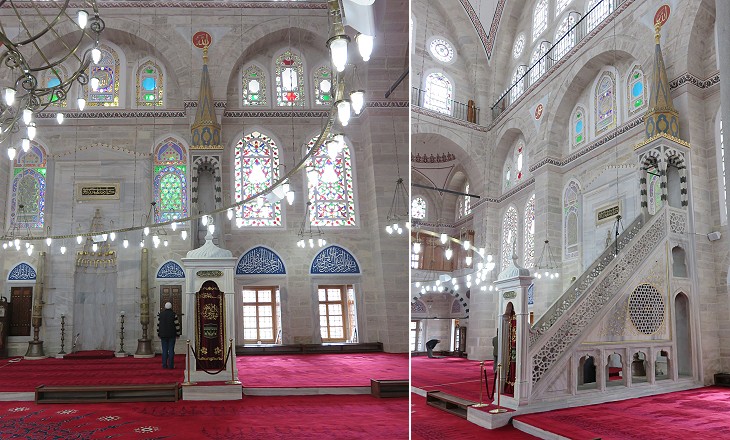 The mosque has been extensively refurbished as part of a massive plan promoted by the government. 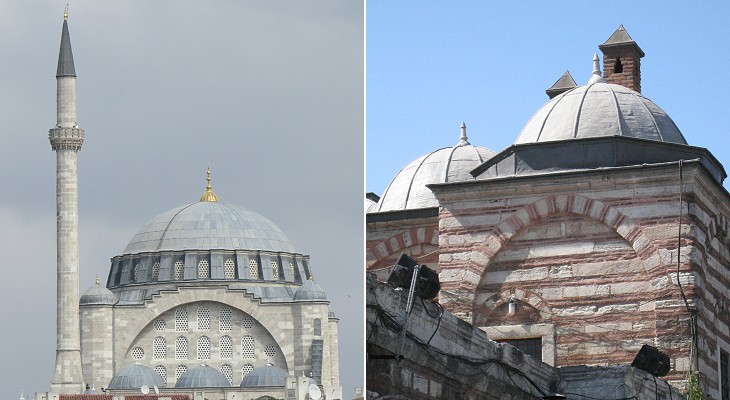 (left) The dome and the minaret of Mihrimah Camii seen from near Top Kapi; (right) Mihrimah Medrese (closed for restoration)