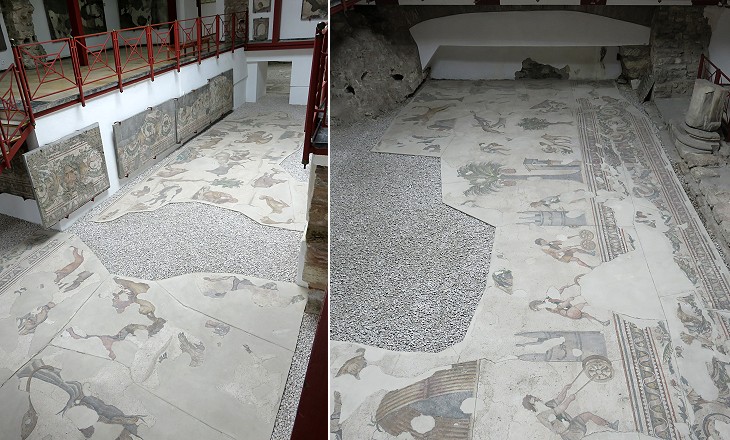 Views of the two main sections of floor mosaics found under Arasta Bazaar, a covered market which is part of Sultan Ahmet Kulliyesi

In the 1930s and 1950s Scottish archaeologists found some ruins of the palace Emperor Justinian built/renovated on the eastern side of the Hippodrome. They were buried under Sultan Ahmet Kulliyesi which was built in the early XVIIth century on the area where the palace once stood. New archaeological excavations carried out by Austrian archaeologist Werner Jobs in the 1990s led to the discovery of floor mosaics decorating a wing of a large courtyard. Eventually some concrete structures were built to allow the public to visit The Great Palace Mosaic Museum. 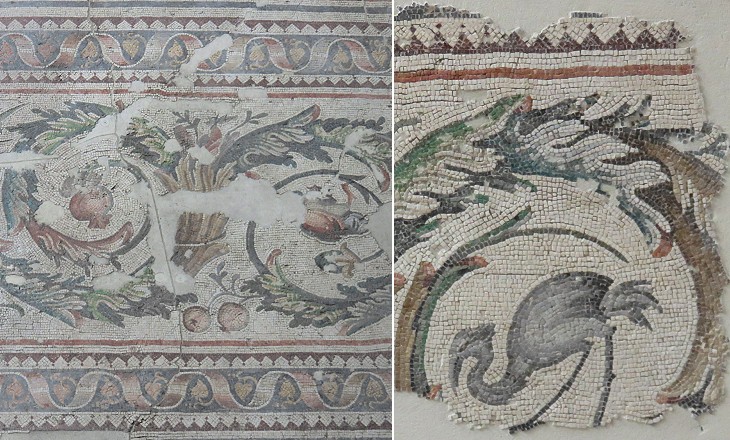 Details of the decorative band

The floor mosaics were made after riots broke out at the Hippodrome in 532. They caused a major fire which destroyed Hagia Sophia and most of the imperial palace. The decorative band surrounding the central part of the mosaic does not depart from traditional patterns and it is relatively plain when compared with those of previous centuries (e.g. a a mosaic at the Museum of Tripoli in Libya). 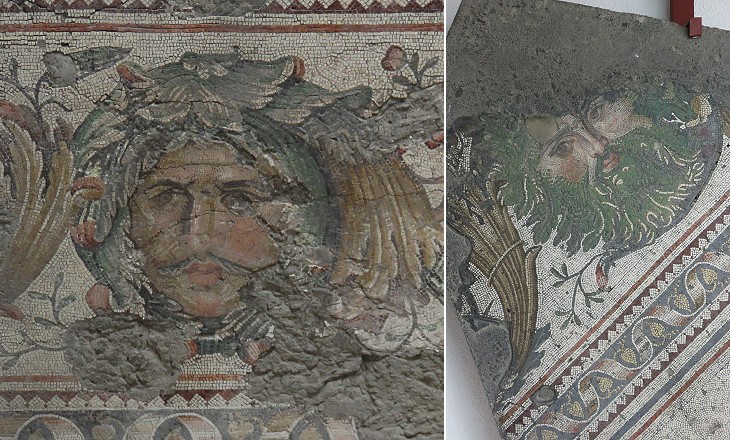 Heads of men in the decorative band; that on the left was found in another part of the courtyard

Heads of men which occasionally interrupt the acanthus scrollwork can be seen in other earlier mosaics. They often represented the Four Seasons or sea creatures (see a mosaic from Antioch at the Louvre Museum in Paris or a mosaic at the Museum of Gaziantep). 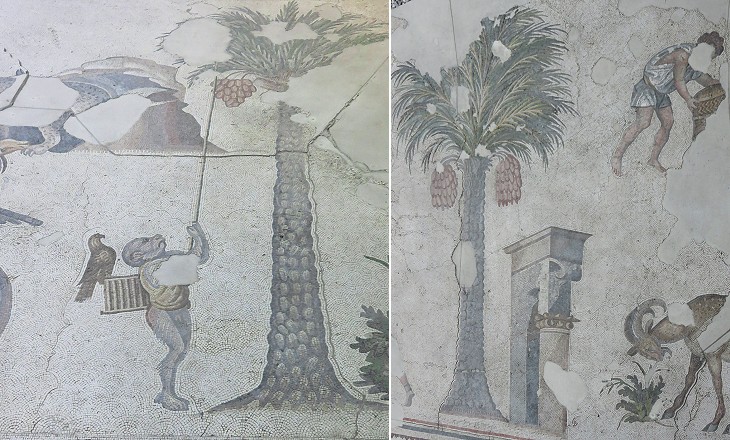 Large area within the band with isolated subjects on a white background: (left) a trained monkey collects dates using a pole. It carries a cage with a falcon on it; (right) another date palm

While the band does not depart from tradition the area it surrounds has some elements of novelty: it is occupied by a series of unrelated subjects/scenes on a plain white background. They are arranged in three strips with occasionally some subjects (e.g. palm trees) occupying two strips. Ancient mosaicists in general had horror vacui (fear of empty space) and they used many ways to frame the central scenes (e.g. Mosaic of Zeus and Ganymedes at the Museum of Thysdrus in Tunisia and a mosaic on a white background at Aquileia), but a mosaic at Villa del Casale in Sicily shows isolated animals on a white background.
Date palm trees were a Christian symbol for Resurrection/Eternal Life and they can be seen next to saints in mosaics of the Vth century (e.g. at the Arian Baptistery of Ravenna), but the palm trees shown above are void of any hidden meaning. 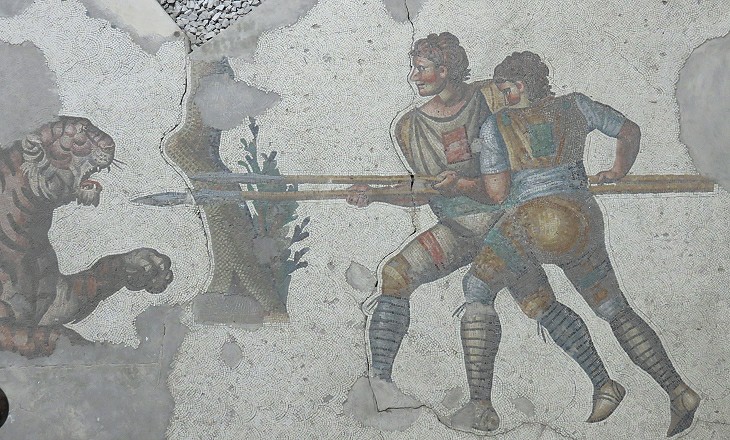 Two men fighting with a tiger

Hunting scenes and venationes, fights with beasts in an amphitheatre, were popular subjects for mosaics. That shown above most likely depicts a venatio. The two men seem to wear a uniform with protections for their legs and a coloured square cloth. You may wish to see how the beasts were captured alive in Africa and then transported to the amphitheatres in mosaics in Algeria and Sicily. 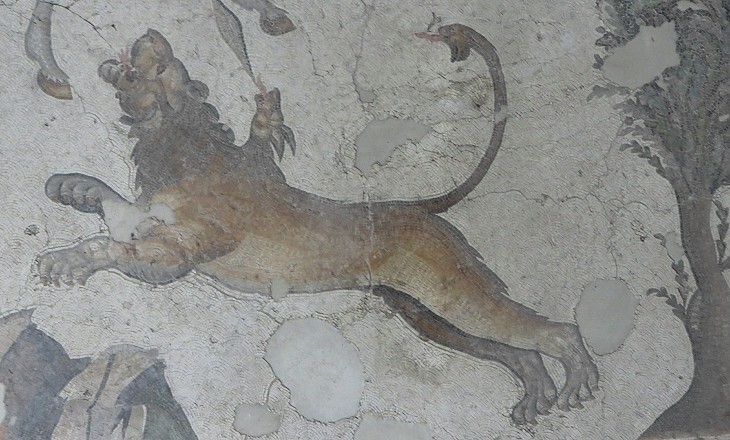 Emperor Justinian was the Head of the Church. He endorsed the appointments of bishops by local constituencies including those of the Patriarchs of Rome and Constantinople. He placed his monogram on the decoration of churches. At S. Vitale in Ravenna in a mosaic next to the altar he was portrayed more as a church leader than as a military commander. The decoration of the courtyard does not have any references to Justinian's religious role; instead some mythological creatures are depicted in isolation, without showing the Pagan hero/god to whom they are usually associated (e.g. Bellerophon) to avoid the charge of impiety, yet indicating that interest for the ancient tales was not entirely gone away. 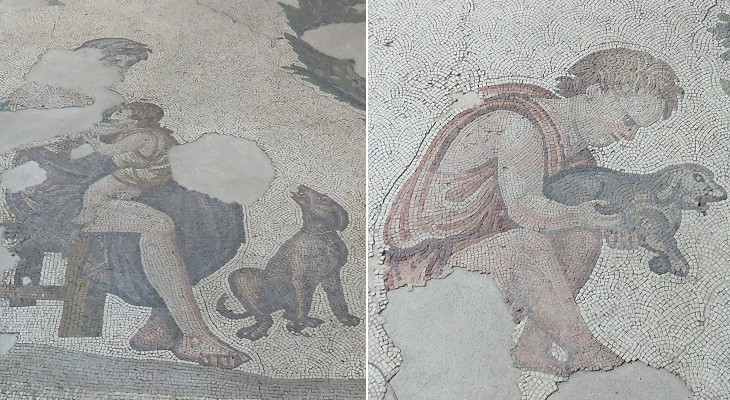 Overall the prevailing subjects are those having a domestic, peaceful content. That makes it likely that the courtyard was part of the private apartments of the Emperor, notwithstanding its large size. Had Justinian planned to receive the highest dignitaries of the Empire in this courtyard, he would have asked the mosaicists to depict his achievements, i.e. the successful wars in Africa and Italy, the reconstruction of Hagia Sophia, the crushing of heresies, etc. 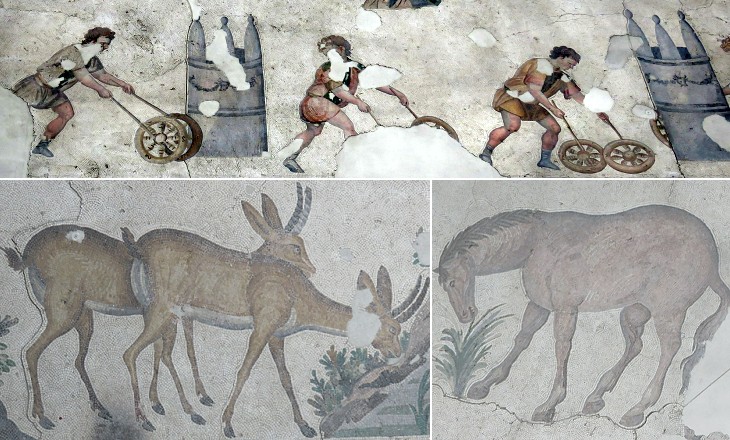 (above) Hoop rolling around the "metae" of a circus (enhanced contrast); (below) peacefully grazing animals

The image used as background for this page shows a detail of the mosaic depicting an elephant.