- The Tulip Era
(inscription on a gate opposite Topkapi Sarayi)

The thirty years which followed the death of Sultan Ahmed I in 1617 were a period of great instability at the Ottoman court; lunatic and child sultans were puppets in the hands of the Janissaries or of the powerful Valide (Kosem Sultan). The Ottoman Empire was lucky that during that same period western Europe was torn apart by the Thirty Years' War (1618-48); the only threats came from the East where the Safavid Persians occupied Baghdad for several years. 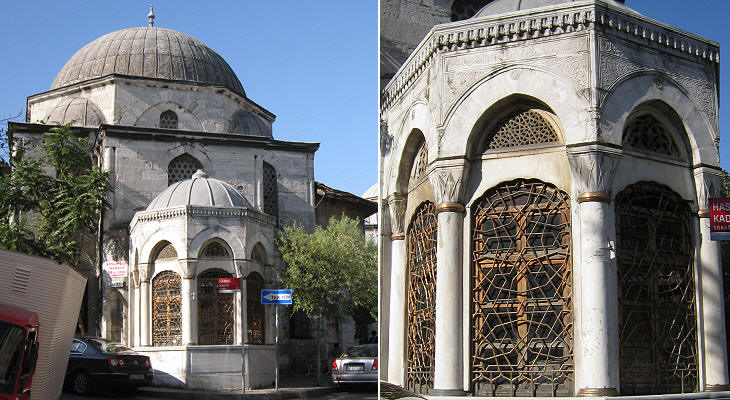 The weakness of the sultans had an impact also on their Grand Viziers, some of whom held the position for less than a month; however one of them, Kara Davut Pacha, avenged his many predecessors who were executed by the sultans, by personally killing Sultan Osman II in the fortress of Yedikule; according to a traditional account the young sultan died from compression of his testicles.
Bayram Pacha was grand vizier for eighteen months, but before that he had been Kaymakam (Mayor) of Constantinople. He built on the seventh hill a kulliye where the largest building was his own turbe. It is one of the few monuments of that chaotic period. 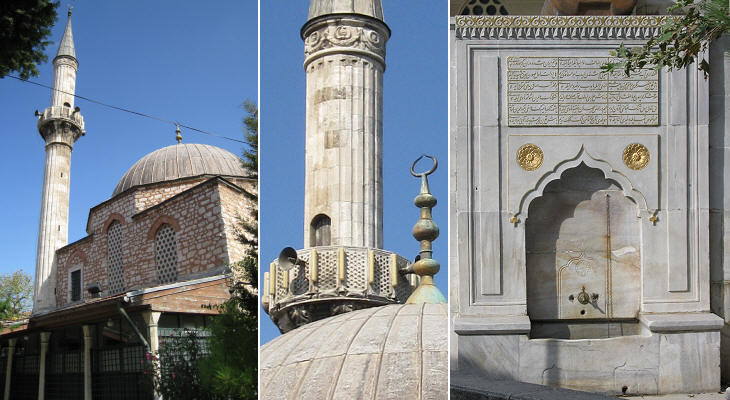 (left/centre) Cinili Cami (1640) at Uskudar; (right) a fountain at Uskudar

Kosem Sultan built on a hill above Uskudar a small kulliye which is now known as Cinili (tiles) Cami with reference to the decoration of its interior; the fact that it was not covered with ashlar is an indication of the difficulties of that period. 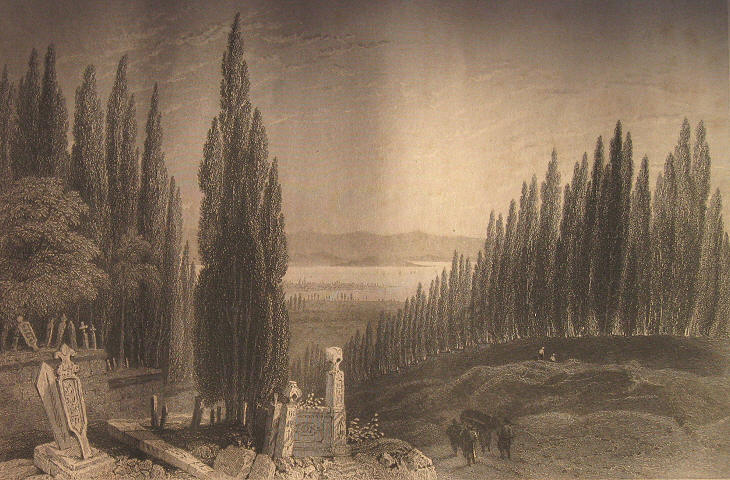 Old guides say that the site of Cinili Cami enjoys one of the finest views over the Bosporus and Constantinople; today the view is impaired by modern buildings; the etching by W. H. Bartlett gives an idea of the evocativeness of the hills above Uskudar. 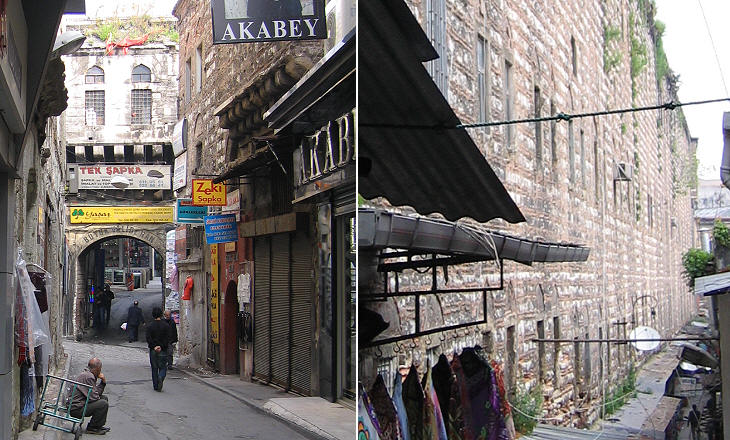 The role played by Kosem Sultan is testified to by the fact that she did not limit herself to funding pious institutions and building mosques, but that she gave her name to the largest han of Constantinople (buyuk means large); it is difficult to find and it is surrounded by other buildings. At one time it was mainly used by Persian merchants and the little mosque in one of its courtyards was reserved to Shia Muslims. Another large han was built later on at a short distance from Buyuk Valide Han and in this case it is possible to appreciate its size and design. 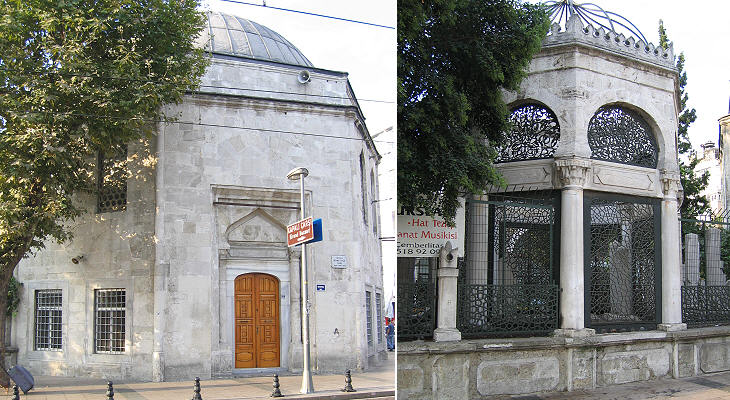 In 1656 the War of Candia was going so badly that between February and September five Grand Viziers were dismissed by Turhan Hatice Sultan, the Valide who was the de facto ruler of the empire (her son Sultan Mehmet IV was fourteen). She eventually offered the position to Koprulu Mehmet Pacha, who at the time was in his late seventies (or even in his eighties). Notwithstanding his age he had a strong will: he asked for and was given extraordinary powers; he obtained assurance from Turhan Sultan that she would no longer involve herself in government decisions and he asked the young sultan to spend his time hunting in Edirne.
Koprulu Mehmet Pacha was the first of a dynasty of grand viziers who served the sultans for nearly eighty years with minor interruptions. He built a kulliye opposite Cemberlitas (Column of Constantine); some of the buildings which made up the complex do not exist any longer; the founder's open air turbe was the first of a series. 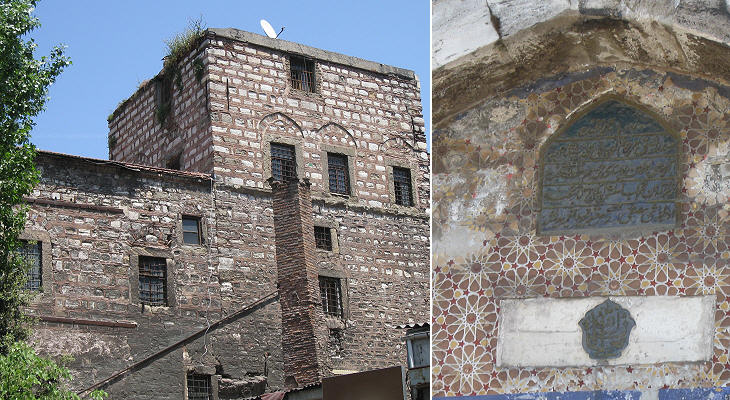 Koprulu kulliyesi included also a han which still stands opposite to the turbe of the founder (in between them Divan Yolu, the most touristic street of Istanbul); the purpose of the han was to provide the kulliye with enough revenue for the sustenance of its clerics and its maintenance. 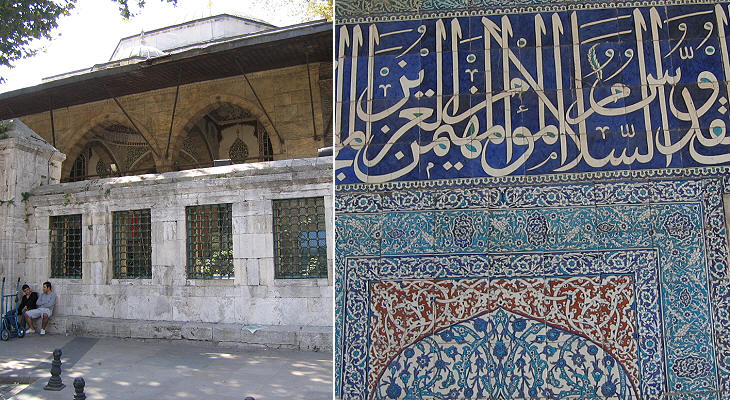 (left) Turhan Hatice Turbesi in Yeni Cami Kulliye; (right) detail of its tile decoration (also in the image used as background for this page)

Turhan Sultan devoted herself to charities and to the completion of Yeni Cami; next to the great mosque she built a large turbe where she was buried and which served as the mausoleum to six other sultans. 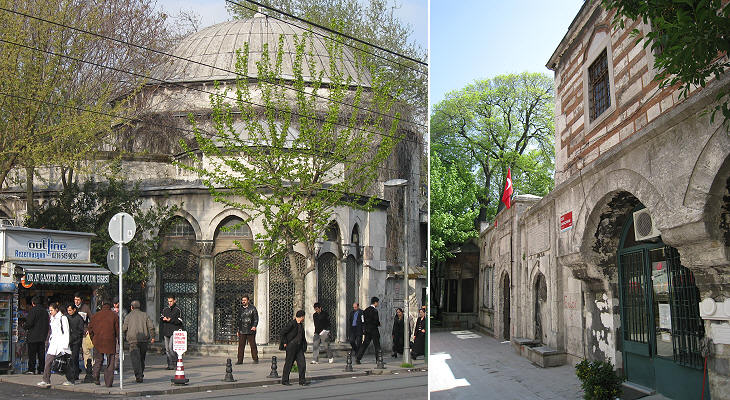 In 1669 the war between Venice and the Ottoman Empire ended after 24 years; the Venetians surrendered Candia, but there was little to celebrate in the Ottoman camp: all the inhabitants and the troops left the town on board the Venetian fleet; they carried with them everything of value.
Hungary had been disputed between the Ottomans and the Habsburgs for a long time. In 1681 Calvinist Hungarians rebelled against the Habsburgs who tried to enforce Catholicism: they sought the help of the Ottomans; in 1682 war was declared and in the next year an Ottoman army laid siege to Vienna. The arrival of the King of Poland with his cavalry led to the Ottoman defeat.
Kara Mustafa Pacha, the Grand Vizier who personally led the Ottoman army, was charged with this setback: his head rolled at the feet of Sultan Mehmet IV in Belgrade. He was buried in a turbe which was completed by his son. He had chosen a location very near the tomb of Mehmet Koprulu.
In the following years the Habsburgs and the Venetians successfully continued the war which ended in 1699 with the Ottoman Empire ceding most of Hungary to Austria and Morea to Venice. The terms of the peace were negotiated by Grand Vizier Huseyin Pacha, who contained the Ottoman losses. He was known as amcazade (cousin) because his career was helped by his being the cousin of a Koprulu Grand Vizier. Unfortunately the complex he built is now included in a private clinic. 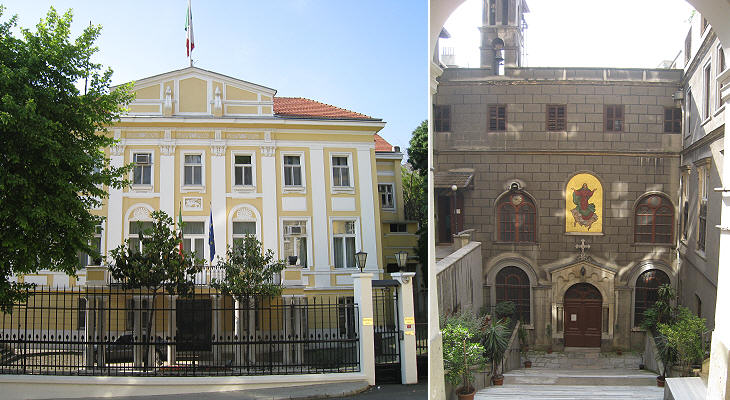 The Venetians celebrated the gains made during the war by renovating their embassy; the new building was an elegant palace in Italian style; the Venetian ambassador was referred to as the bailo and the neighbourhood where the palace is located was called after him (Beyoglu); it now houses the Italian consulate.
Catholic (Latin according to usage in the Levant) churches were not allowed within the walls of Ottoman Constantinople: the Franciscans had to relocate a parish they had in the city, first to Galata and later on near the Venetian embassy; the church was built in 1769, but its current aspect is due a later reconstruction. Draperis is the surname of an Italian lady who made a donation. 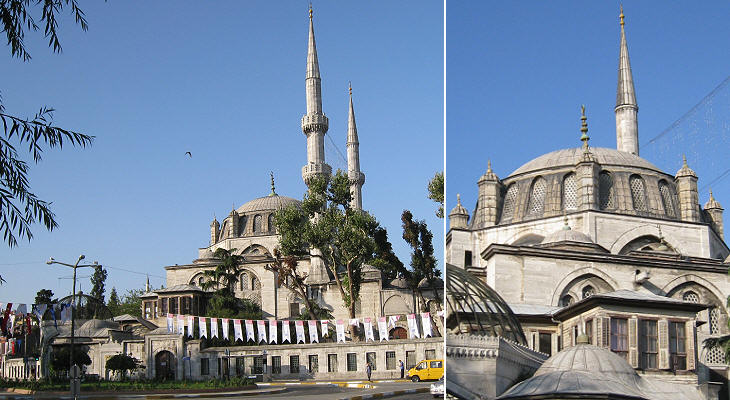 The Russians took advantage of the Ottoman difficulties and they conquered the fortress of Azov and made their first appearance on the shores of the Black Sea.
In 1703 Sultan Mustafa II was overthrown by a popular revolt and he was forced to abdicate. His successor, his brother Sultan Ahmet III dedicated a kulliye at Uskudar to their mother.
In order to distinguish it from that built on the hill (Atik Valide Kulliye) this is known as Yeni (new) Valide Kulliyesi. 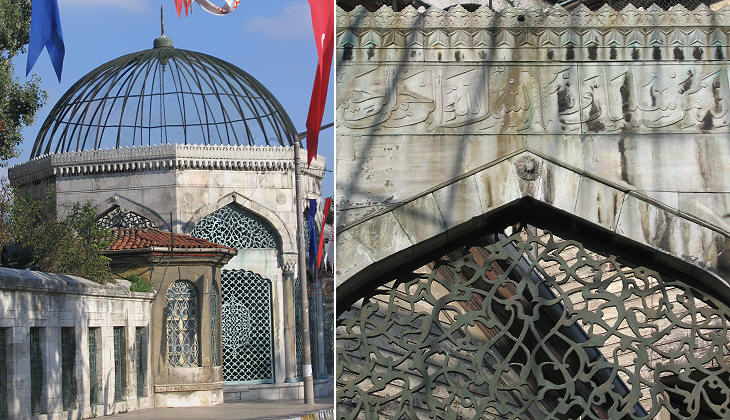 The mosque does not depart from the patterns of traditional Ottoman architecture, whereas the design of the turbe shows a lightness which announces a desire for change. 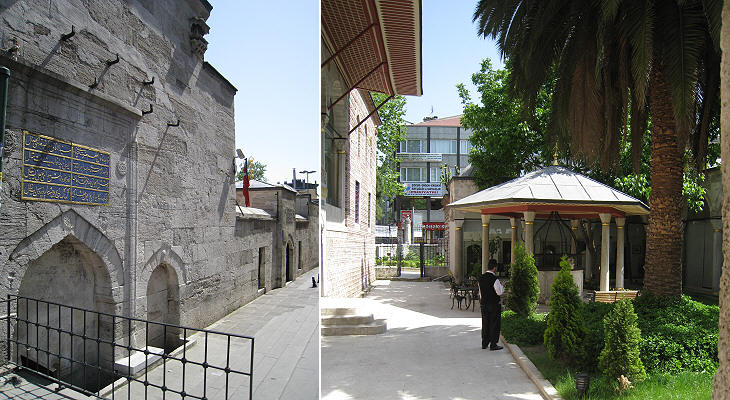 One of the causes which led to the rebellion against Sultan Mustafa II is that he seemed to rely excessively on the advice of Seyh-ul-Islam Feyzullah Efendi: he was the highest (Muslim) religious authority in the Ottoman Empire; he became the confidant of the sultan and the de facto ruler of the country, because the sultan preferred to spend his time hunting in Edirne; when the rebellion broke out Sultan Mustafa II let him down and Feyzullah Efendi was eventually put to death in 1703.
In 1700 he had built a small medrese which is now used as a public library. Due to the fact that many grand viziers had the same name, their birthplaces helped in distinguishing them: Corlulu means from Corlu, a small town in Eastern Thrace. Corlulu Ali Pacha was Grand Vizier in 1706-10 during the reign of Sultan Ahmet III: he followed strict budgetary policies and tried to limit unnecessary expense. For this reason he was against waging war on Russia as suggested by King Charles II of Sweden, who, after having been defeated at Poltava in 1709, found refuge in Ottoman territory. Because of his position, Corlulu Ali Pacha lost his post in August 1710 and his life in the following year. The medrese he built opposite the turbe of Kara Mustafa Pacha now houses shops and a picturesque café. 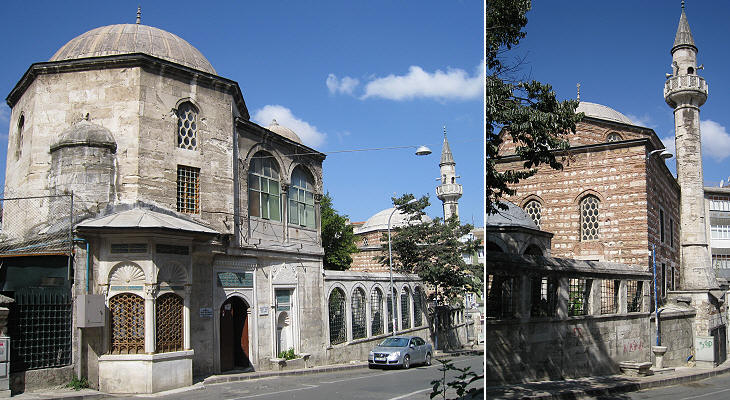 In 1714 Sultan Ahmet III waged war on Venice and easily re-conquered Morea, but an attack on Corfu was repelled. Austria intervened and won a decisive battle at Petrovaradin. At the peace of Passarowitz in 1718, the Ottomans kept their conquests in Morea, but lost Belgrade, which was regarded as their key fortress on the Danube.
The following years until 1730 are known as the Tulip period, because tulips became very popular in Constantinople; it was a relatively prosperous and peaceful period during which the Ottoman society was modernized. Tulips are usually associated with the Netherlands, but they originated from Turkey and Central Asia. During the Tulip period they appeared in the decoration of tiles, carpets, miniatures and the rich, including the Sultan, had tulip gardens at their residences. The flower in Turkish is called lale, but the Venetians called it tulipano perhaps from Turkish tulbent (turban) for a resemblance with that headdress.
The Ahmediye complex is not named after Sultan Ahmet III, but after Eminzade Haci Ahmet Pacha who was an officer in charge of the Arsenal. It is located in Uskudar, at a short distance from Yeni Valide Camii.

Nevsehirli Ibrahim Pacha was Grand Vizier during the whole Tulip period and he is regarded as the true ruler of the country in those years. He reformed Ottoman foreign policy by establishing embassies in many European capitals; he was ousted by a rebellion of the Janissaries.
Dar-ul-hadis means "school of tradition" and is a medrese where students learn theological matters; this is true for all medrese, but usually teachings include other matters. 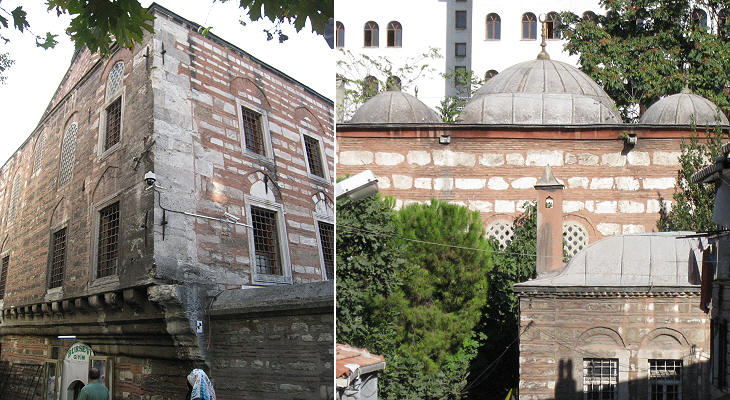 The small mosque built by Ismail Aga Efendi who was Seyh-ul-Islam with Sultan Ahmet III, has not lost the religious purpose its founder gave it. Today it is at the centre of the most "pious" neighbourhood of Istanbul. Efendi is both a historical title given to Ottoman princes and members of the clergy and the modern Turkish substitute for "Hello!" when answering the phone.