No city in Germany has so great a number of palaces as Vienna. (..) The houses of the nobility and great officers of state are magnificent structures.
Thomas Nugent - The Grand Tour: A Journey Through the Netherlands, Germany, Italy and France - 1749
King Louis XIV inaugurated at Versailles a new way of quelling the periodical revolts of the French nobility which had made so insecure the throne of his predecessors. The French noblemen left their castles in the countryside, where a monotonous life led them to hatch plots, to enjoy the balls and entertainments of the royal court. This approach became popular among the other European monarchs, including the Habsburgs. After the victorious end of the 1683 Siege of Vienna, earls and other noblemen from Hungary, Bohemia, Italy and Poland settled in Vienna to be part of the court and they built large palaces to show their rank. 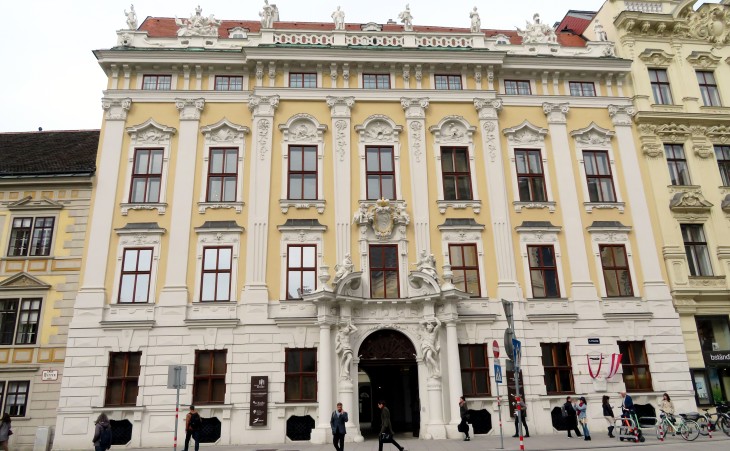 Kinsky Palace; a detail of the portal can be seen in the image used as background for this page

The palace was built in 1713-1716 for Count Wirich Philip von Daun, a military commander who was appointed first Austrian Viceroy of Naples in 1713. It was bought by the Kinsky, a noble family from Bohemia, in 1784. It is situated in Freyung at the end of Herrengasse, a street near the Imperial Court where other families had already built their palaces. The position of Kinsky Palace in a large square, rather than in a narrow street, makes its façade one of the very few which can be properly observed; it immediately shows its similarity with that of Gian Lorenzo Bernini's Palazzo Chigi Odescalchi. 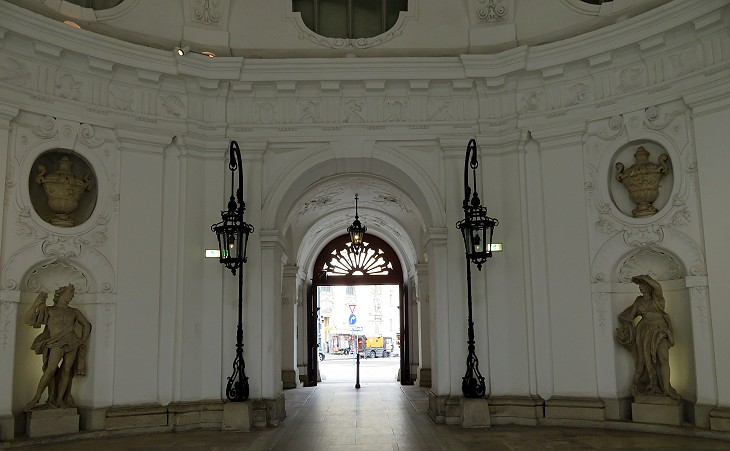 Kinsky Palace is regarded as the masterpiece of Johann Lukas von Hildebrandt. He was born in Genoa in 1668 of German parents, his father serving in the army of the Republic. He studied military and city architecture in Rome with Carlo Fontana, the leading architect in Rome after the death of Bernini. He joined the Imperial Army as an engineer during a campaign in Piedmont, where he knew Prince Eugene of Savoy, the Imperial Commander: "Gian Luca" as he was usually called, followed his boss in Vienna, and designed the Belvedere Palace for him. Hildebrandt completed the construction of Peterskirche by designing its dome and its façade. 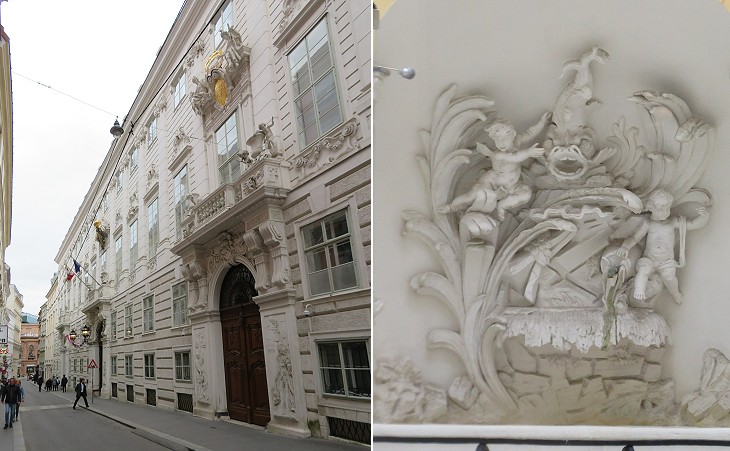 (left) Stadtpalais des Prinzen Eugen; (right) fountain in its courtyard (see some Baroque fountains in the courtyards of Roman palaces)

The palace of the late prince Eugene in particular is deservedly admired by travellers, as well for the grandeur of the building and conveniency of the apartments, as for the richness of the furniture. Nugent
The gigantic order pillars of Kinsky Palace can be seen also in the City (or Winter) Palace of Prince Eugene of Savoy which was designed by Johann Bernhard Fischer von Erlach in 1697-1702. The architect was born near Graz in 1656, the son of a sculptor. He was sent to Rome to learn the art at the workshop of the Schor, leading decorative sculptors from Innsbruck (see a work by Giovanni Paolo Schor at S. Maria in Campitelli). In Rome, Fischer's artistic interests widened to include architecture. 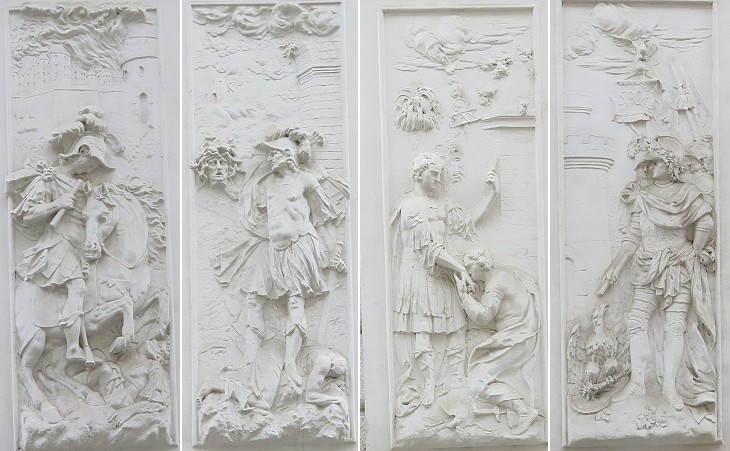 Austria owed to Prince Eugene a heavier debt than perhaps any country ever owed to one man.
John Russell - A Tour in Germany, and Some of the Southern Provinces of the Austrian Empire - 1825
Unfortunately the street is too narrow for a proper view of the palace façade. The reliefs decorating some of the portals portray the military achievements of the Prince; he contributed to the greatness of the empire by defeating the Ottomans at Zenta (1697) and Petervaradino (1716) and the French at Blenheim (1704) and Turin (1706). He is shown both as a modern commander and as an ancient Roman leader, as if Vienna Gloriosa (*) was the heir of Alma Roma (**). The completion of the palace after 1702 was assigned to Johann Lukas von Hildebrandt.
(*) Vienna Gloriosa: Honoribus Illustrissimorum, Perillustrium, Reverendorum ... was the title of a 1700 doctoral essay by Ignaz Reiffenstuell at the Jesuit University of Vienna. (**) Alma Roma is a reference to Rome by Dante in Inferno - Canto II which can be translated as benign/great mother. (September 1716) The streets are very close, and so narrow, one cannot observe the fine fronts of the palaces, though many of them very well deserve observation, being truly magnificent. They are built of fine white stone, and are excessive high.
Letters of the Right Honourable Lady Mary Wortley Montague: Written during Her Travels in Europe, Asia and Africa to Persons of Distinction, Men of Letters, &c. in Different Parts of Europe
This large palace was designed in 1708-1714 by Johann Bernhard Fischer von Erlach, before he was commissioned Karlskirche, his masterpiece. 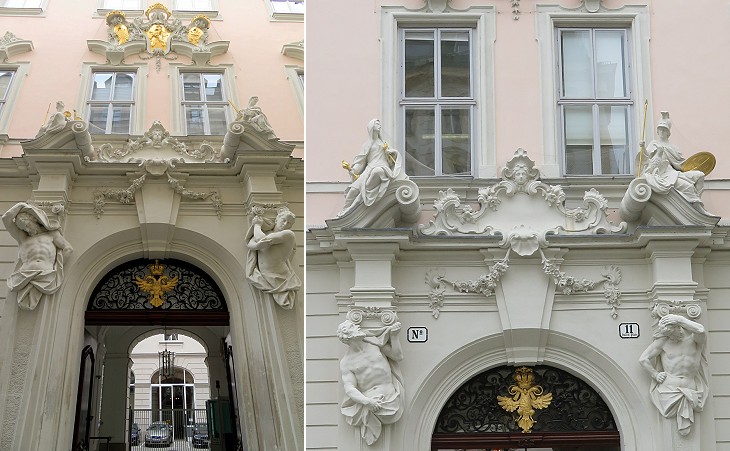 The Habsburgs were Archdukes of Austria and Kings of Bohemia, in addition to being Holy Roman Emperors and sovereigns of other territories. This meant that the administration of Austria was separated from that of Bohemia which was housed in this large building (Hofkanzlei, Central Chancellery). It was located opposite the Town Hall (Rathaus) in a sort of administrative district in the former Jewish quarter. The building was enlarged by Mathias Gerl in 1750 and one can notice the change in style in the design of the new portals: they show a Rococo frivolity, with one of the atlantes who does not care to fulfil his duty, but looks upwards as if to see what is going on. 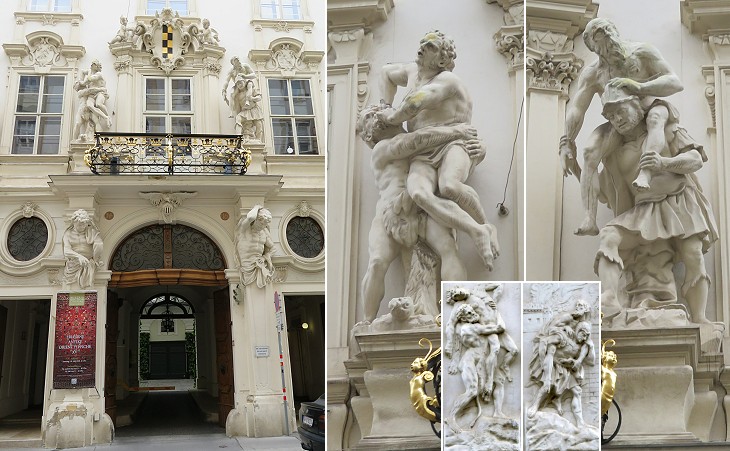 The palace was built in 1715 by and for Johann Christian Neupauer, a rich town councilor and an architect who had worked with Johann Bernhard Fischer von Erlach. Its design follows the pattern of Bohmische Hofkanzlei, but the statues above the portal are of a greater size and full of movement as they depict two personages, rather than one. The choice of the subjects was perhaps influenced by similar reliefs at Stadtpalais des Prinzen Eugen. The building was not designed for a noble family, but as an apartment block for wealthy bourgeois (see some XVIIIth century similar buildings in Rome). 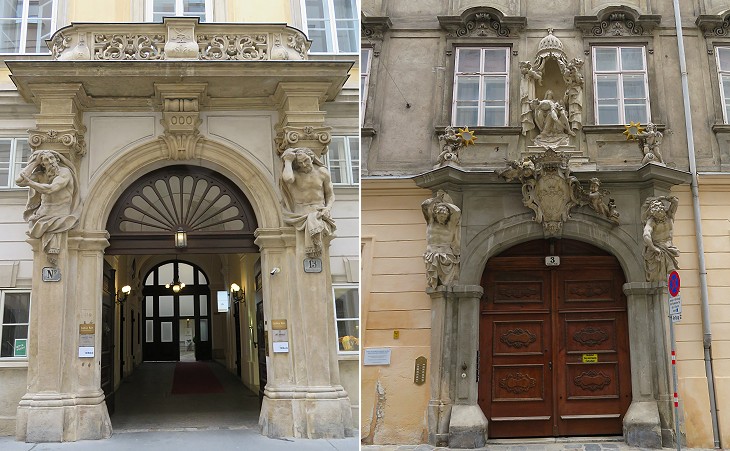 (left) Erdody Palace; (right) "Zu den sieben Schwertern haus" (House of the Seven Swords, thus named after the swords in the coat of arms) in Schwertgasse 3 with a Deposition

The joyous and happy Austrian always pleased with himself and inclined to do all he can to please every body else, looks with much indifference on the proud step, the gallant bearing and magnificent parade of the haughty Hungarian who full of imagined superiority (..) makes the streets resound with the clattering of his chivalrous spurs, even though he should never mount a horse. Russell
The palace was built in the 1730s for Count Georg Erdody, who belonged to a noble Hungarian/Croatian family who were known for their loyalty to the Habsburgs; the wars against the Ottomans which ended with the treaties of Carlowitz (1697) and Passarowitz (1718) greatly increased the Hungarian territories of the Habsburgs and per consequence the importance of the Erdody.
The House of the Seven Swords was built in ca 1720/1730; the seven swords refer to the Sorrows of Mary which are often depicted as seven swords (as at Cordoba). 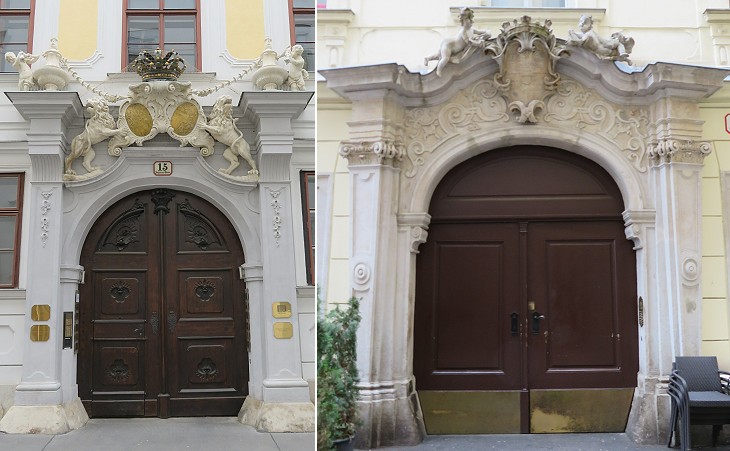 XVIIIth century portals with a width/height ratio which is different from that of the principal palaces of the nobility: (left) in Johannesgasse 15; (right) in Dorotheergasse 2 (Bartolotti Palace)

In the XVIIIth century many palaces with gardens were built outside the city walls; they are covered in a separate page.