Vienna has retained only a limited number of Renaissance buildings: during the XVIth century some emperors preferred to live (and embellish) Prague, thus depriving Vienna of the advantage of being the residence of the imperial court. 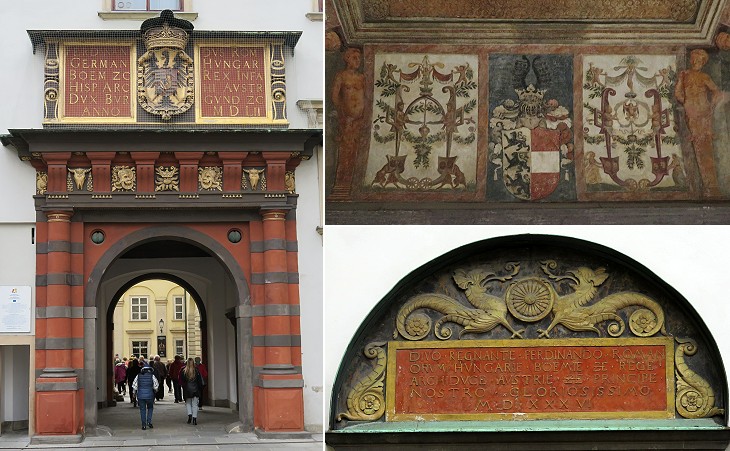 The first Ottoman siege of Vienna started on September 27, 1529, very late in the season, and the early arrival of winter forced Sultan Suleiman the Magnificent to give up the attempt and to return to Constantinople. The medieval walls of the town however had proved unable to sustain a long siege. The Habsburgs therefore decided to replace them with new state-of-the art walls and those of Verona were taken as the example to follow. They were designed by Michele Sammicheli, who designed also the walls of Candia (Iraklion) and Forte S. Andrea in Venice. The walls were pulled down in the XIXth century, but a surviving gate in the Hofburg tells us that the walls were not just a merely defensive structure, but that a lot of attention was paid to their aspect. Schweizertor was designed by Pietro Ferrabosco, an Italian architect, and it was decorated with bucrania (ox skulls), a typical element of the frieze of classical temples (one of which is shown in the image used as background for this page). In origin the gate was not painted. 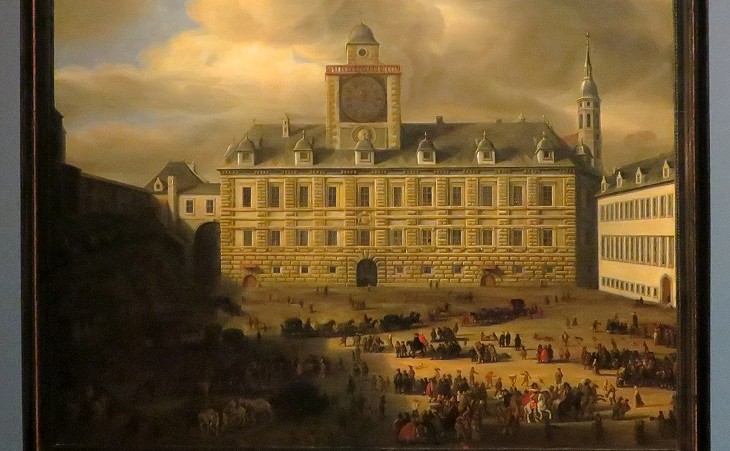 Hofburg (Castle of the Court) is the name given to the complex of the imperial palaces: at the beginning it was just a small fortress protecting Vienna from Hungarian and Ottoman raids; with the construction of state-of-the-art Renaissance walls, the defensive aim of the Hofburg became redundant and the emperors turned it into their residence. Its oldest part was initially designed by Pietro Ferrabosco in 1577: it shows an adaptation of the Florentine use of bugnato, stones projecting from the wall, similar to what was done in a palace of Prague in the same period. The building was commissioned by Ernest, brother of Emperor Rudolph II, who lived there until 1594. It was partly redesigned in the early XVIIth century. Today it is named after Empress Dowager Wilhelmine Amalia, widow of Emperor Joseph I, who lived there in 1711-1722 before retiring to the Salesian convent she contributed to found. Hofburg was greatly enlarged and modified through the centuries; the last major additions occurred at the beginning of the XXth century. 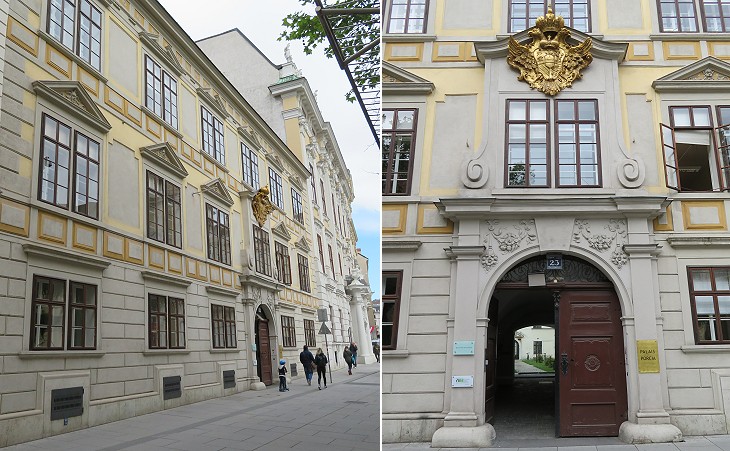 Porcia Palace in Herrengasse: (left) façade and the adjoining Kinsky Palace which was designed by Johann Lukas von Hildebrandt in 1713; (right) portal

Herrengasse means Street of the (noble) Men and is situated near the Hofburg: it owes its name to the fact that some noble families built there palaces there to be close to the court. It is somewhat connected with Empress Wilhelmine Amalia because Princess Dorothea Porcia, mistress of Joseph I, lived in a palace in Herrengasse. The Porcia were a family of Italian origin who were named after their fiefdom near Aquileia. The building was designed in 1546 for Gabriel von Salamanca, a Spanish nobleman who held important positions at the imperial court in 1521-1526. Eventually some Baroque additions were made to its portal, but not that which characterizes the portals of the XVIIIth century palaces of Vienna, i.e. two telamons or atlantes. In 1696 Domenico Martinelli, an Italian architect, designed Harrach Palace opposite Porcia Palace. 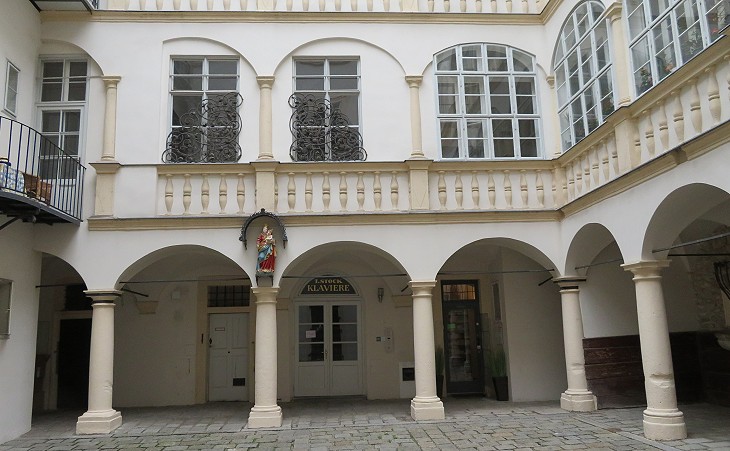 The cradle of the medieval town is located around Stephansdom, its Romanesque/Gothic cathedral; by walking in the nearby net of narrow streets it is possible to find elements of Renaissance architecture, which, in the case of the courtyard of Schwanenfeld Haus, clearly show an Italian influence (for similar courtyards in Rome see Palazzo di Giacomo Mattei and Palazzo della Cancelleria). 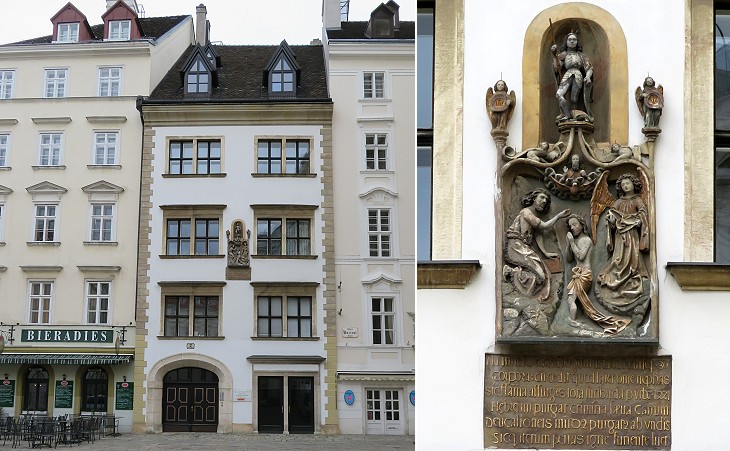 In 1421 the Jews were expelled from Vienna and those who refused to leave were burnt at the stake. In 1497 a house in the Jewish quarter was rebuilt and its owner placed a relief which had a rather common Christian subject. The long inscription however gave it another meaning because it made references to floods and fires which washed away the sins of the Jews.
The structure of the building is similar to that of Renaissance houses in Rome where the space between the windows was often decorated with frescoes. 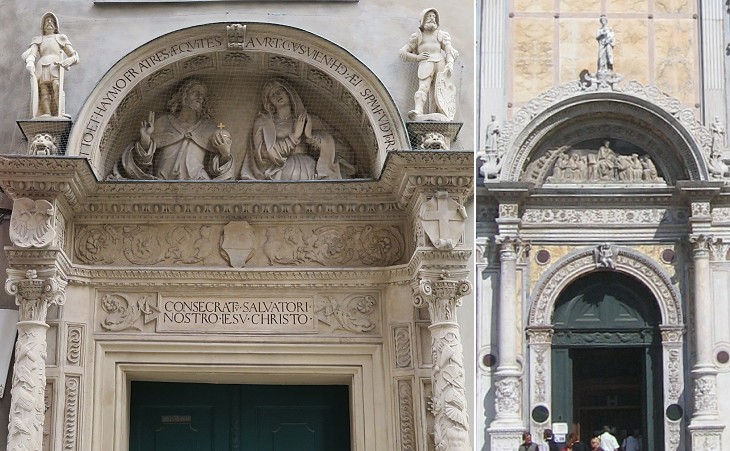 A very fine Renaissance portal in Salvatorkirche shows the close artistic relationships existing between Vienna and Northern Italy, in particular with Venice.