The churches built in the XVIIth century in Vienna have a very distinctive Roman aspect, which is not as much evident in the palaces of the same period. The development of new patterns for the churches of Rome influenced the design of those built in other Italian regions, but palaces were less impacted by the Roman trends; in particular the influence of Palladian architecture remained strong in Northern Italy, from where many architects who worked in Vienna came from. 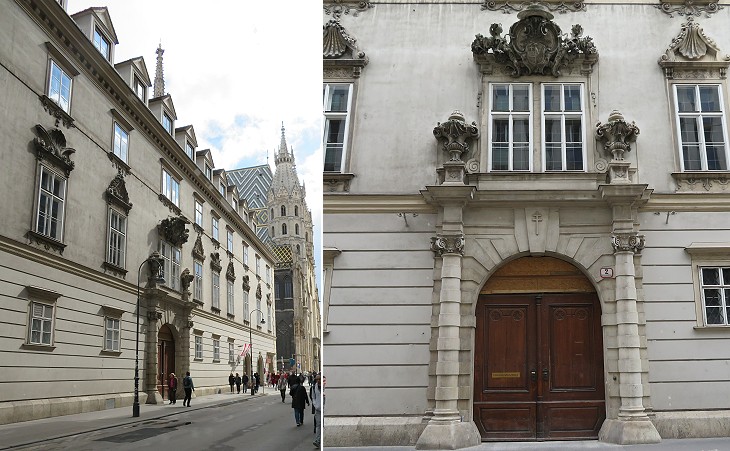 The Archbishop's Palace was built in 1641 on the basis of a project by Giovanni Coccapani, a Florentine architect which may explain its rather neat design. Coccapani is not known to have ever visited Vienna. The elaborate stucco decoration of the windows was added in 1716 and it is shown in the image used as background for his page. It is one of the very few palaces which were not replaced by new ones after the 1683 Siege of Vienna and the following victorious war against the Ottomans. Bissone is a very small town in Switzerland, not far from Como: its inhabitants and those of the surrounding region were regarded as skilled stone-cutters. The best known stone-cutter from Bissone is no doubt Francesco Borromini who started his Roman career by sculpting heads of angels for the doors of S. Pietro.
Giovanni Pietro Tencalla (some thirty years younger than Borromini) left Bissone for Vienna where he became one of the most important architects. He gave an Italian touch to a palace he designed in 1685 for Sigmund Helfried, Earl of Dietrichstein, member of an important noble family. The portal was modified by Johann Bernard Fisher von Erlach, one of the main XVIIIth century architects, who studied in Rome.
The palace was bought in 1753 by the Lobkowitz, a noble family from Prague (see their palace there). It housed the first performance of Beethoven's Third Symphony, thus its main hall is called Eroica-Saal. 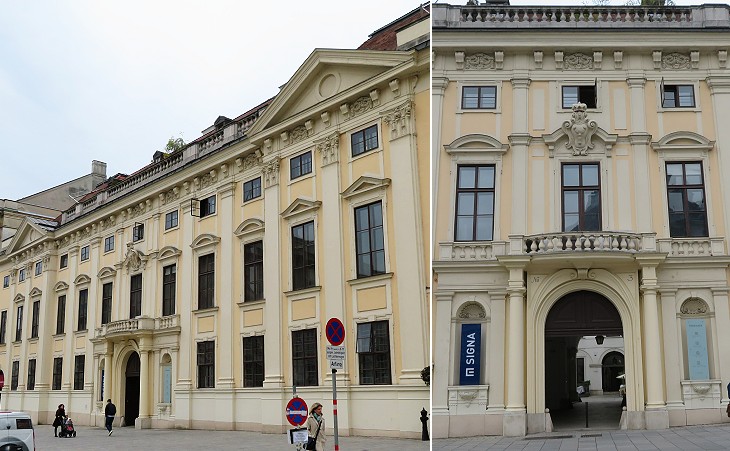 This palace was designed by Domenico Martinelli, an Italian architect from Lucca for Ferdinand Bonaventura von Harrach in 1696-98. The Harrach were an important family in XVIIth century Vienna, because of their role during the Thirty Years' War (1618-1648) and in the re-Catholicization of Bohemia. Ernst Adalbert von Harrach was appointed Archbishop of Prague in 1623 and Cardinal in 1626 at the age of 28. His nephew Ferdinand Bonaventura most likely owed his second name to his mother Lavinia Gonzaga, who belonged to the family who ruled Mantua (bonaventura means good luck). Emperors Ferdinand II and Ferdinand III both married princesses of Mantua and these family links were another cause for close artistic relationships between Vienna and Italy.

This imposing palace was acquired by Prince Johann Adam of Liechtenstein for 15,000 florins from Dominik Andreas von Kaunitz, a diplomat, in a partially done condition in 1694. Three Italian architects contributed to its design and decoration: the sculptures are the work Giovanni Giuliani, another Italian.
Some Italian artists set their residence in Vienna at the end of the XVIIth century; they had local assistants who eventually took the lead in art matters in the next century, e.g. Georg Raphael Donner, an apprentice of Giuliani, who designed some of the finest fountains of Vienna. Both Liechtenstein and Harrach Palace have pillars of the gigantic order which were first designed by Michelangelo for Palazzo dei Conservatori and later on by Gian Lorenzo Bernini for Palazzo Chigi Odescalchi. 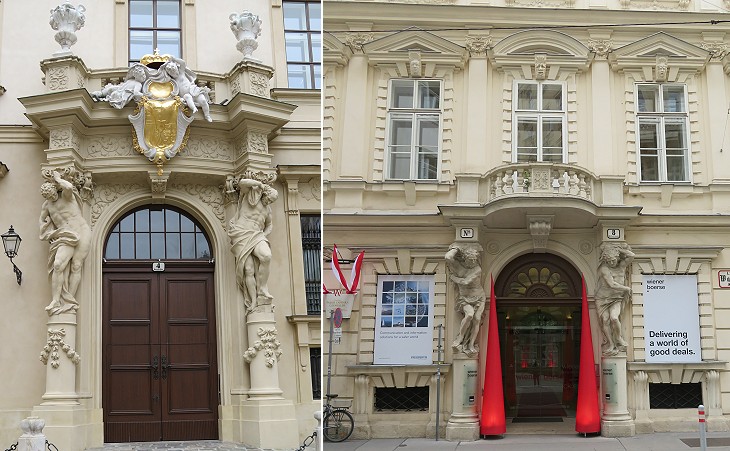 The main portal of Liechtenstein Palace was decorated with columns: a design very common in Rome, due to the availability of many ancient columns. The smaller portal was designed in the XVIIIth century: the columns were replaced by atlantes (aka telamons) gigantic male figures portrayed in the act of supporting the structure above them. This feature became prevalent in Vienna in the XVIIIth century and it characterized its civilian architecture; while seldom used in Rome, atlantes were common in Northern Italy (see a 1677 pulpit in the Cathedral of Chioggia).
Albert, Count of Caprara, was a nephew of Ottavio Piccolomini, one of the chief commanders of the imperial army during the Thirty Years' War and the patron of Servitenkirche. Born in Bologna, he followed the steps of his uncle and in addition to his military activities he represented the Emperor at the Sultan's court in Constantinople. His son Enea Silvio (the name of Pope Pius II Piccolomini) played a key role in the Siege of Vienna. In 1698 he commissioned the design of his palace, not far from the Harrach one, to Domenico Egidio Rossi, an Italian architect who spent most of his life in Austria and Germany. 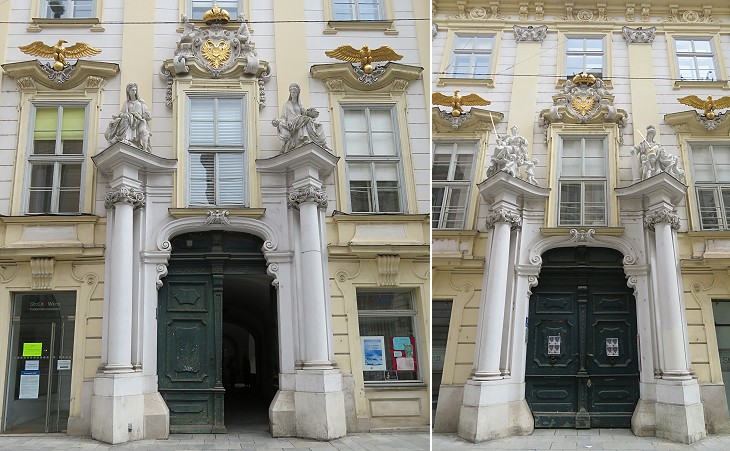 We do not know the name of the architect who redesigned the medieval Town Hall of Vienna, but he was certainly influenced by the works by Borromini, as the curved lines of the portals indicate (see the façade of S. Carlo alle Quattro Fontane). The courtyard of the building houses Andromedabrunnen, a fine fountain by Donner.