In the past, historians described at length in their books wars, battles, plots, even love affairs, but paid little attention to other factors which had a major impact on the rise and fall of great empires.
Today one of the key reasons behind the decline of the Roman Empire is thought to have been the series of pestilences which began at the time of Emperor Marcus Aurelius. The 1348 bubonic plague known as the Black Death reduced the population of Europe by one-third and it caused a general economic recession. 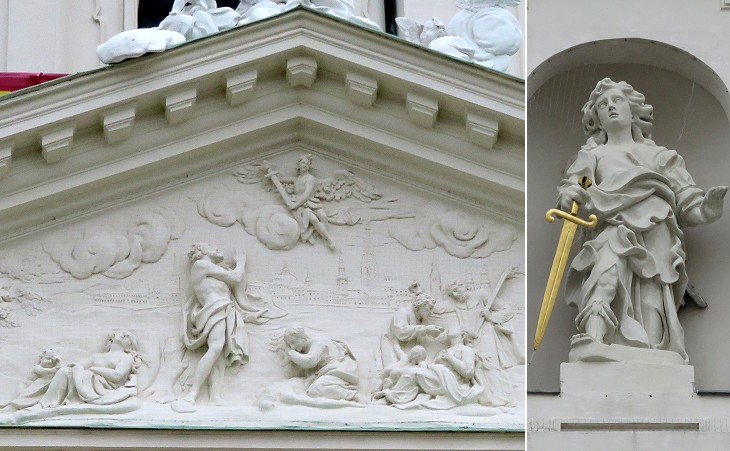 Vienna was particularly exposed to pestilences, as it was located along trading routes linking Central Europe with Constantinople and Asia. In 1679 the city experienced a major bubonic plague outbreak which occurred again in 1714.
All knew what had happened in Rome in 596: St. Gregory the Great, while praying for the cessation of a plague at the head of a procession, saw an angel in the act of sheathing his sword, a sign that the calamity was coming to an end (the image used as a background for this page shows the bronze statue of an angel at the top of Castel Sant'Angelo in Rome). Several churches of Vienna show references to that event. 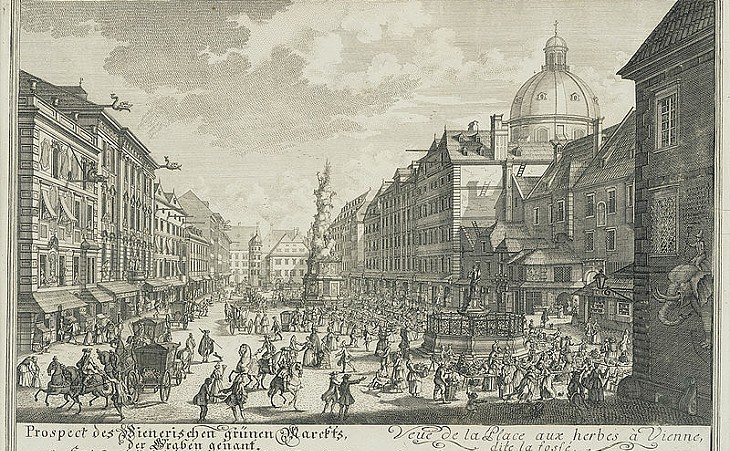 There is a handsome monument erected by the emperor Leopold in one of the squares of the town in honour of the Holy Trinity which is very much admired for the beauty of its figures and other ornaments.
Thomas Nugent - The Grand Tour: A Journey Through the Netherlands, Germany, Italy and France - 1749
After the 1679 plague a monument specifically meant to thank God for the end of the scourge (Pestsaule) was erected in the Graben (Ditch), a large square named after the trench which protected the ancient Roman town. Pestsaule set the pattern for many similar monuments in other Austrian towns, e.g. at Perchtoldsdorf. It was actually built after the 1683 Siege of Vienna and it is also a celebration of that victory. 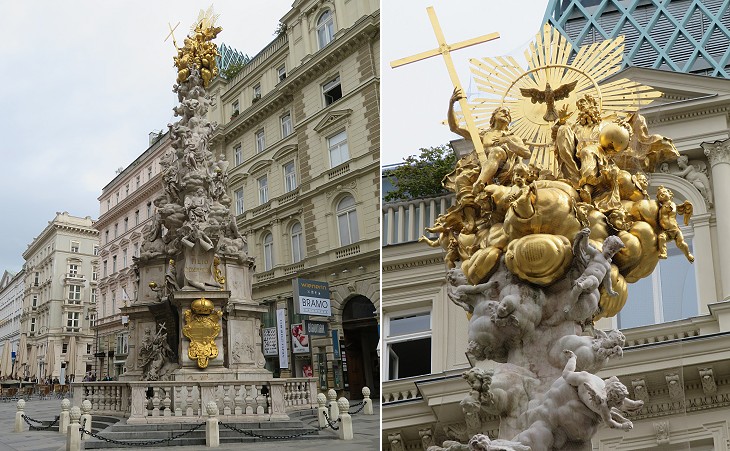 The best of these squares happen to be in parts of the city where the fashionable world does not often intrude (..) they are commonly adorned with some religious emblem or a public fountain. They both (..) have too much work about them; there is too much striving after finery of sculpture, a department of art in which the Austrians are still very far behind. The consequence is that there are crowds of figures.
John Russell - A Tour in Germany, and Some of the Southern Provinces of the Austrian Empire - 1825
The top of Pestsaule is a spectacular spiral of clouds and angels. It shows the hand of Ludovico Burnacini, an Italian scenery designer who played a key role in the cultural life of Vienna in the late XVIIth century, and it owes a lot to Gian Lorenzo Bernini's Chair of St. Peter. 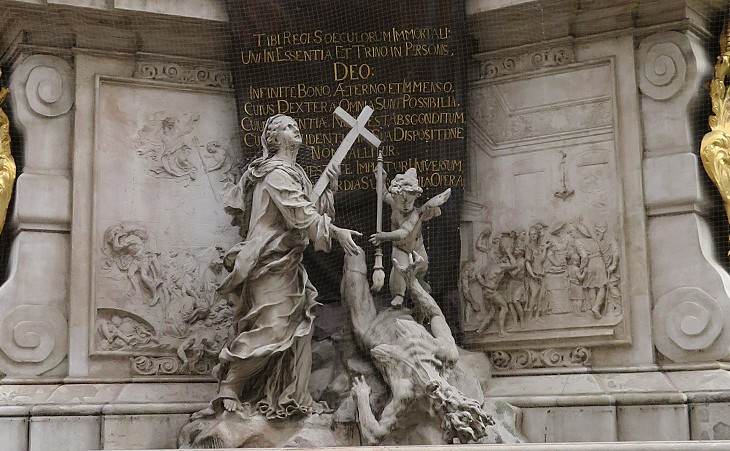 Pestsaule in Graben: Triumph of Faith over Pestilence by Paul Strudel

The complex iconographic plan and the many inscriptions of Pestaule were overseen by Father Franciscus Menegatti, the Jesuit confessor of Emperor Leopold. The Triumph of Faith over Pestilence adopts the same iconography which was used to depict the Triumph of Religion over Heresy by Pierre Legros in 1695 at il Gesù, the main Jesuit church. A smaller, but very similar, Pestsaule can be seen near Ulrichskirche, a parish church which is located outside the walls. The church was razed to the ground by the Ottomans in 1683. It was rebuilt in 1721-1724 and a small Pestsaule was erected behind its apse. At the time the church was part of a small suburban community which was regarded as separate from Vienna. The neighbourhood was developed at the initiative of Joseph I, emperor in 1705-1711, hence it is known as Josefstadt. 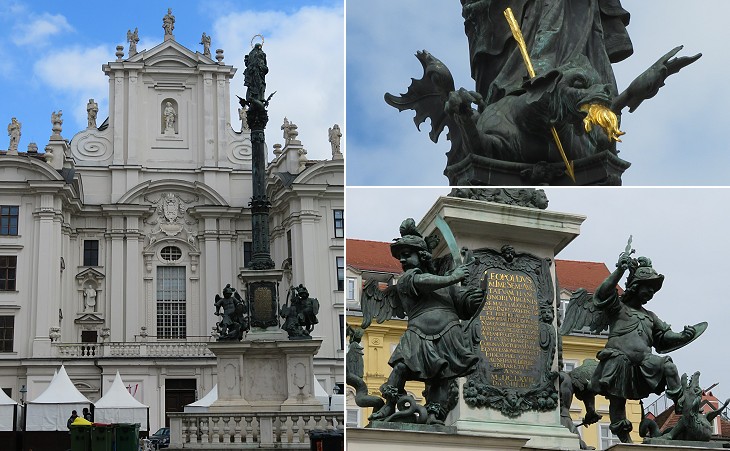 (left) Mariensaule Am Hof and Kirche Am Hof; (right) details: the four putti symbolize a passage of Psalm 91 "Thou shalt go upon the lion and adder: the young lion and the dragon shalt thou tread under thy feet" (1662 Book of Common Prayer); the beasts represent pestilence, war, famine and heresy

Many processions took place in Vienna during pestilences to invoke their end. Prayers chiefly addressed the Virgin Mary, St. Sebastian and St. Roch.
In 1667 Emperor Leopold I erected a monument to the Virgin Mary to celebrate her intercession to quell pestilences and other calamities which had hit Vienna. The design of the monument was no doubt influenced by the column erected in 1605 by Pope Paul V opposite S. Maria Maggiore in Rome and by a similar column in Munich.
Monuments celebrating the end of pestilences were erected in many parts of Europe. In Rome the end of a very calamitous pestilence which hit the city and its environs in 1656 was celebrated by the construction of S. Maria in Campitelli, a new shrine for a miraculous image of the Virgin Mary, and of votive chapels to St. Roch in many small towns (e.g. at Arsoli and Piglio).

(left) Mariensaule in front of Piaristenkirche, another church outside the walls which belonged to the Piarists, aka Scolopi; (centre) detail of the shaft; (right) statue of the Virgin Mary

This Mariensaule shows a design which is midway between the Mariensaule Am Hof and the Graben Pestsaule. The column was erected to celebrate the end of the 1714 pestilence. The construction of the church began in 1716 at the initiative of Sigismund Kollonitz who in 1722 became the first Archbishop of Vienna. The iconography of the Virgin Mary is that which can be noticed in many sacred images in Vienna and at Colonna dell'Immacolata in Rome. 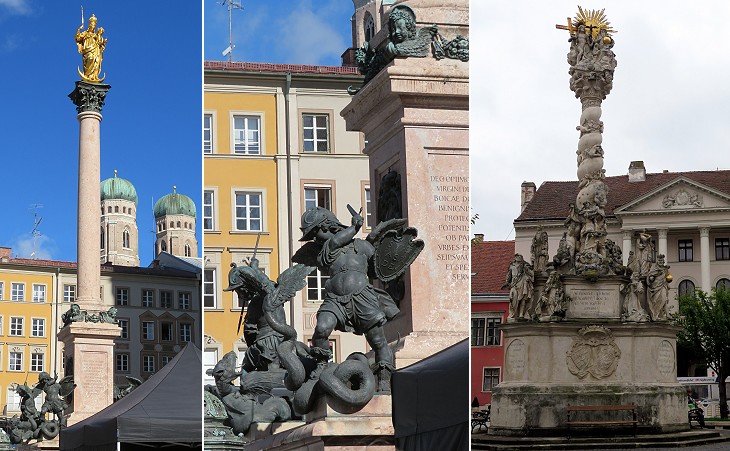