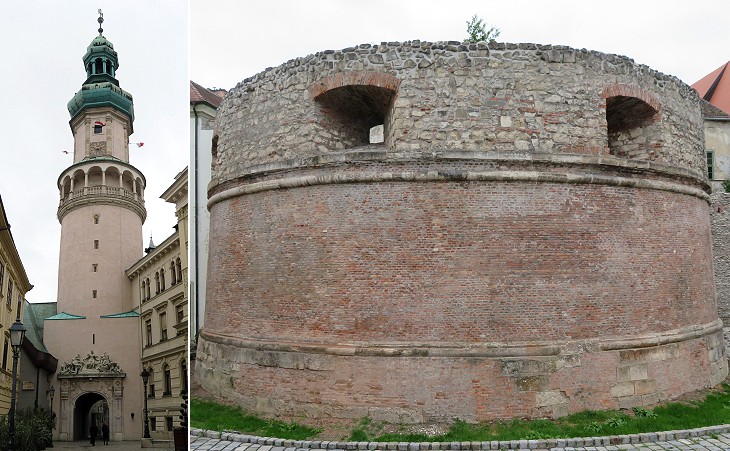 (left) Firewatch Tower which was erected after a fire destroyed most of the medieval town in 1676 (see the nearby Pestsaule which celebrates the end of a pestilence); (right) XVIIth century round bastion on the site of the ancient Roman walls

We made an excursion from Vienna to the south east, to see some antient places in Hungary. We went to Oldenburg (today's Sopron), thought to be Julia Scarabantia in the country called the deserts of the Boii.
Richard Pococke - A Description of the East and Some Other Countries - 1745
The Boii were a Gallic or German tribe who are best known for having joined the Senones in an invasion of Italy in 390 BC; they were eventually forced to abandon their territories in today's Western Hungary; their name is associated by many historians with Bohemia and Bononia (Bologna).
Sopron was fortified by the Habsburg Holy Roman Emperors after the Ottomans conquered most of Hungary in 1526. In 1683 it surrendered to Grand Vizier Kara Mustafà Pacha before being retaken by the Imperial Army in that same year. 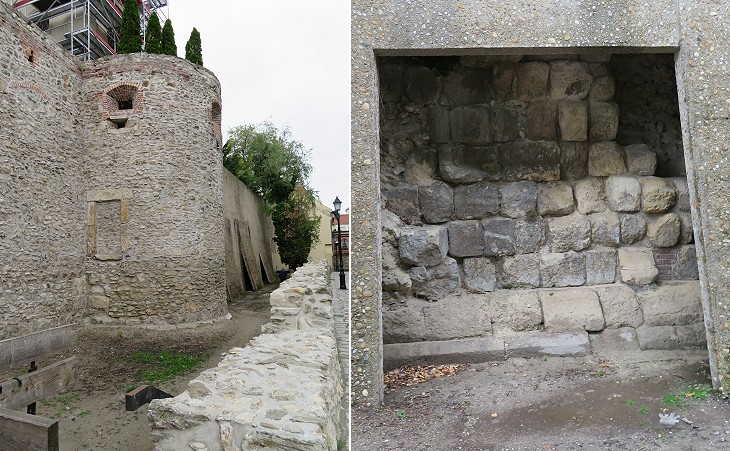 (left) XIVth/XVIIth centuries walls and towers; (right) evidence of the Roman walls which were incorporated into the new ones

Sopron was repeatedly bombed during WWII; the destructions unearthed structures of the Roman town which lay beneath later buildings or were incorporated into them. The Roman walls have an elliptical shape and are dated early IVth century when Scarbantia acquired a strategic importance to defend the road towards North-Eastern Italy in case the Quadi and other barbarian tribes managed to cross the River Danube which marked the border of the Empire. 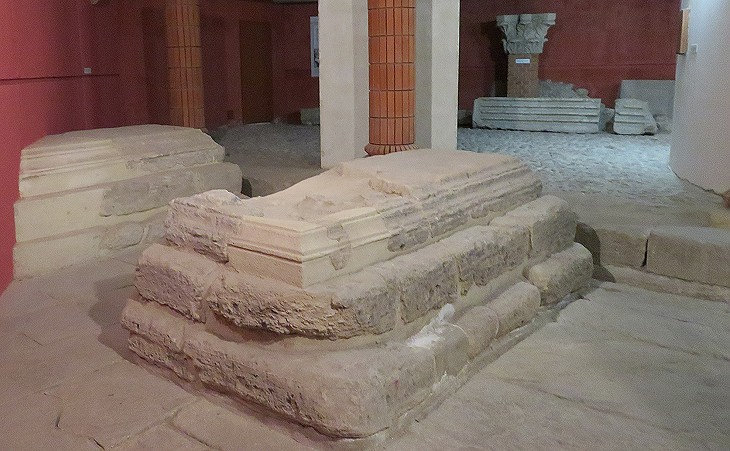 Evidence of the Forum of Scarbantia

The bombings unearthed the remains of a group of buildings including a portico of the Forum; they can be seen in an underground archaeological area in the historical part of Sopron together with altars and inscriptions. Other Roman exhibits are on display in Fabricius House, a nearby XVIIIth small palace, named after town magistrate and mayor Endre Fabricius who bought it in 1806. Archaeologists found evidence of Roman baths in its cellars. (left) Forum of Scarbantia: inscription celebrating the restoration of the Forum with the name of the town; (right) Fabricius House: tombstone of C. Sextilius Senecio

At Hafka, a league to the east of Oedenburg, we saw an inscription on a stone coffin with these letters on it, M. SCARB. which seem to imply, that it was a municipium. There are several reliefs and inscriptions at Oedenburg, and they find many medals, and other antiquities. Pococke
The finely written inscription celebrating the restoration of the Forum was found in 1858 and it is dated IInd half of the IInd century. It refers to MUN(icipii) FL(avi) SCARB(antiae). Scarbantia was made a municipium, i.e. it was granted a degree of self-government, by Emperor Vespasian.
Sextilius Senecio was a decurion, a town magistrate; his highly decorated tombstone was erected by his father and it is dated late Ist century during the Flavian dynasty. The family was of Italian origin and it must have been a very influential one, because Sextilius Senecio was only 25 when he died. Fabricius House: (left) tombstone of Petronius Rufus (ca 70 AD); (centre) tombstone of Litugena (IInd century - the relief of the she-wolf is used as background for this page): (right) top of a funerary monument found in 1934; its pyramidal shape resembles that of other funerary monuments, e.g. Igeler Saule near Trier and its relief a tomb at Aquileia

Petronius Rufus died at 20. His tomb was made by Urbana, a freedwoman, whom perhaps he was about to marry. The tombstone of Litugena seems to show a couple and their daughter, but the inscription tells another story. It was made by Litugena for Secundino, her son, and for Vibena, a vernacula, a young slave who was raised in the house (see another tombstone for a vernaculus at Cologne). Both Urbana and Litugena wanted to be portrayed in the tombstones. See tombstones of legionaries at Scarbantia in the introductory page. 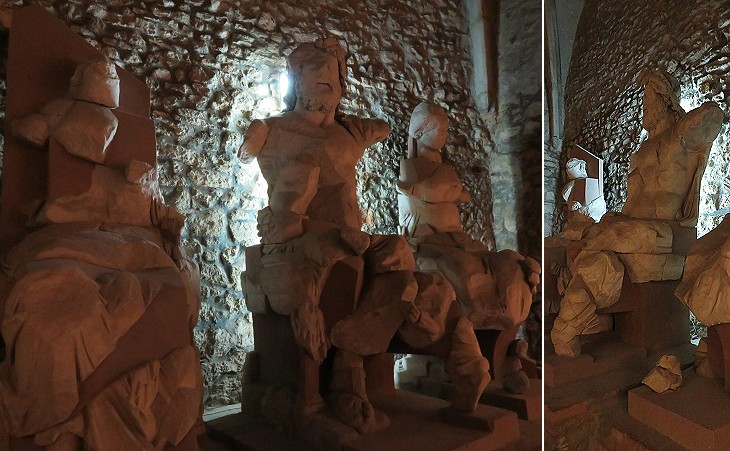 Fabricius House: statues of the Capitolium: Minerva, Jupiter and Juno

It was customary for a provincial town to erect in the Forum a Capitolium, i.e. a temple dedicated to the three gods who were worshipped on the Capitoline Hill of Rome. It was a symbol of loyalty to Rome and the site where ceremonies were held to celebrate festivities and events related to the imperial family. Capitolia have been found in all the provinces of the Empire, but in particular in that of Africa (Tunisia); see those at Thuburbo Majus, Thugga and Sufetula. In 1893 the construction of a new Town Hall at Sopron led to the discovery of fragments of three gigantic statues of Jupiter, Juno and Minerva. Their marble is typical of Afrodisias, a town in Asia Minor which in the IInd century was renowned for its quarries and its workshops of sculptors. The statues might have been shipped to Aquileia and thereafter moved to Scarbantia at the time of Emperor Antoninus Pius.
There was a trade route from Aquileia across the Julian Alps; (..) here the mountain-chain which encircles the North of Italy sinks to its lowest and provides a gentle ascent. (..) For those going Northward, the road forked at Emona and crossing a range of hills descended into the valley of the Dravus. (..) There the level plains of Pannonia (Western Hungary) received it until the Danube was touched at Carnuntum.
M. P. Charlesworth - Trade-routes and Commerce of the Roman Empire - Cambridge University Press 1926 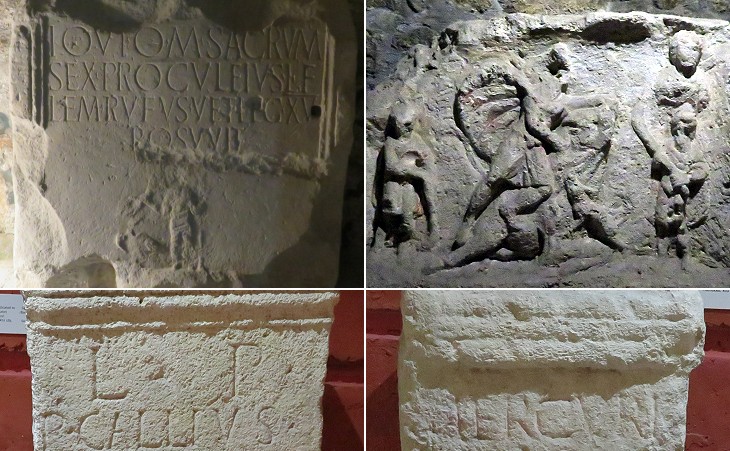 (above) Fabricius House: (left) altar to Jupiter with a small relief showing the god with a thunderbolt and an eagle; (right) relief portraying Mithra slaying the bull; (below) Forum of Scarbantia: (left) altar to Liber Pater; (right) altar to Mercury

The Capitolum was a temple, but not a place of worship. Votive altars were usually erected to individual gods, many of whom were related to the ethnic/social communities who lived at Scarbantia. Mithra was highly popular among the veterans, Liber Pater was chiefly worshipped at Leptis Magna, the hometown of Emperor Septimius Severus and of some of his officers, Mercury was associated with ancestral deities of Gaul and Germany. Some of the altars were eventually employed as decorative construction material for the façades of churches and houses, which explains why they are so worn out. 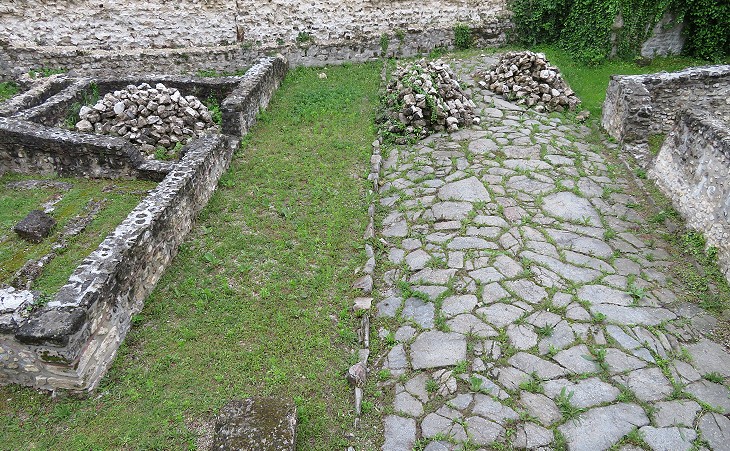 The visible remains of the Roman town include a section of a stone-covered street, a house with a heated floor and traces of wall paintings and a workshop with bronze wares.
In ca 440 Scarbantia was occupied by the Huns of Attila; in 568 the region was invaded by the Avars, a nomadic people from Central Asia who had a particularly destructive effect on the European countries they conquered; the Pannonian plain was referred to as Deserta Avarorum in medieval chronicles. In 626 the Avars almost succeeded in conquering Constantinople.