Many nations dwell among the Alps; but the more remarkable are (..) the Rhaeti and the Vindelici, who are all divided into a multitude of states. (..) Along the course of the great river Ister (Danube), the Rhaeti touch upon the Norici. (..) Adjoining to the Norici is Lake Peiso (Neusiedler See), and the deserts of the Boii; they are however now inhabited by the people of Sabaria, a colony of the now deified emperor Claudius, and the town of Scarabantia Julia.
Pliny the Elder - Historia Naturalis - Book III - Translation by John Bostock and Henry Thomas Riley. 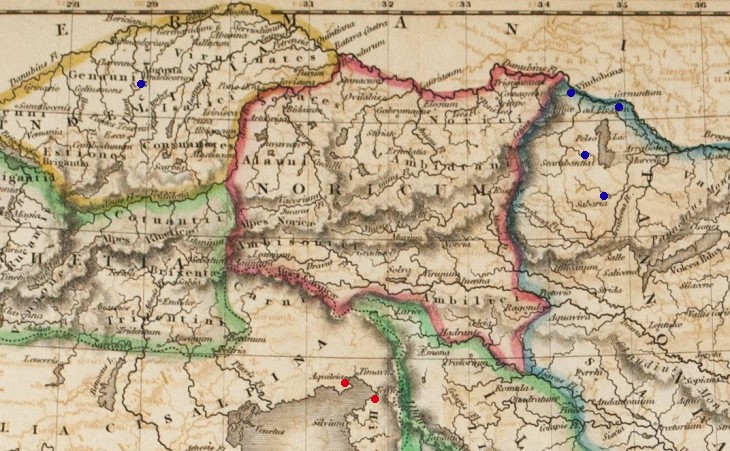 1822 Longman's Map of the Roman Provinces on the Upper Danube River (Rhetia, Vindelicia, Noricum and Pannonia): the blue dots indicate locations covered in this section; the red dots indicate Aquileia and "Tergeste" (Trieste) which are covered in another section

During the IInd century BC Rome established its political and military hegemony in Northern Italy by founding colonies and making alliances with some of the local Celtic tribes. In 187 BC a road (Via Aemilia) was opened from Ariminum (Rimini), an old Roman colony, to Piacenza on the River Po and in 148 BC a military road (Via Postumia) was opened between Aquileia on the Adriatic Sea and Genoa on the Ligurian one. Towards the end of the century the Cimbri and the Teutons, two large nomadic tribes who lived north of the Alps invaded the valleys of the Po and of the Rhone (which the Romans had conquered in ca 120). They were eventually defeated by Marius in 102 and 101. The Romans however did not embark on military campaigns to establish their rule on the Alpine region. 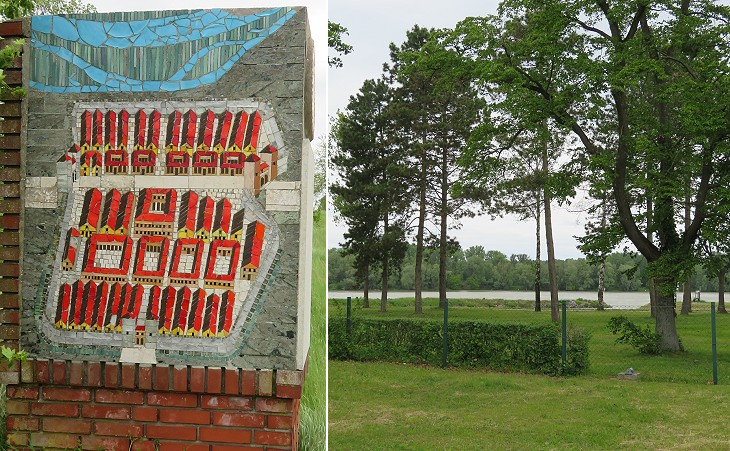 (left) Assumed layout of the Roman military town of Carnuntum at Altenburg in Austria, near the border with Slovakia; (right) the River Danube at Altenburg

In 57-55 BC Julius Caesar completed the conquest of Gaul by subduing the tribes living on the left bank of the River Rhine. Emperor Augustus realized that the control of the Alpine region was needed to avoid a major weakness in the defence of the new Roman territories. He ordered his generals to subdue the Helvetii, a confederation of bellicose tribes of the Swiss tableland, and other tribes. In 15 BC the Roman legions reached the right/southern bank of the Danube River and began to build a series of fortified camps there. In 98 AD Trajan, before leaving his post as governor of Germany for taking that of Emperor in Rome, visited all the fortifications along the Rhine/Danube border to ensure they could effectively withstand attacks. 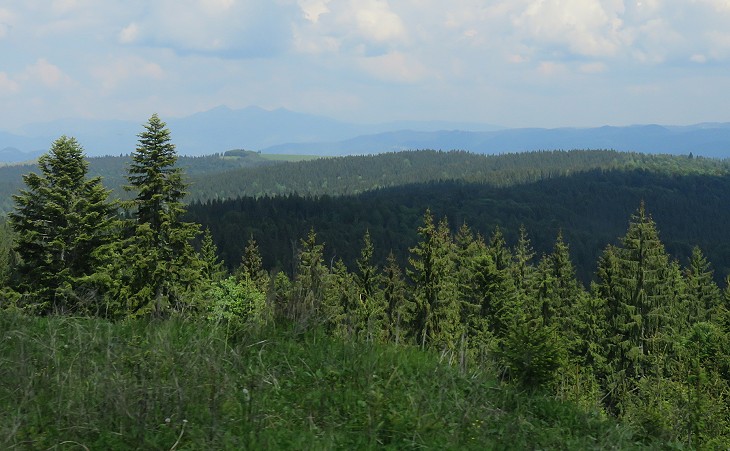 Forests in the Eastern Carpathian Mountains near Vatra Dornei in Romania in June 2015; similar forests covered most of Central Europe in Roman time

The breadth of this Hercynian forest (..) is to a quick traveler, a journey of nine days. For it can not be otherwise computed, nor are they acquainted with the measures of roads. It begins at the frontiers of the Helvetii, Nemetes, and Rauraci, and extends in a right line along the river Danube to the territories of the Daci and the Anartes.
Julius Caesar - De Bello Gallico - Loeb edition
More than a century later the forests north of the Alps continued to impress the Romans: Another marvel, too, connected with the forests! They cover all the rest of Germany, and by their shade augment the cold. (..) In the same northern regions, too, is the Hercynian Forest, whose gigantic oaks, uninjured by the lapse of ages, and contemporary with the creation of the world, by their near approach to immortality surpass all other marvels known. Pliny
The Romans were keen on developing farming, but the Alpine regions offered little opportunity for it.

Kunsthistorisches Museum of Vienna: IInd century AD very restored floor mosaic portraying events of the life of Theseus and the Labyrinth inside a walled town; it was found in 1815 at Loig near Salzburg and it resembles a mosaic at Italica in Spain

It is necessary to describe the means by which Italy maintained communication with (..) her Northern armies along the Danube and in Pannonia. The amount of traffic, however, that came from the North-East was comparatively small and these districts have not the same importance for trade as other provinces. (..) We encounter a number of roads leading in a northerly direction through the mountain passes, and the towns lying at the end of them were all connected by an East and West route ensuring quick transit along the whole of the Northern frontier. (..) Throughout this region road-making went on busily, primarily for military reasons, but trade soon followed the flag.
M. P. Charlesworth - Trade-routes and Commerce of the Roman Empire - Cambridge University Press 1926
The Romans founded or enlarged a number of towns in the main valleys which led to the mountain passes. Iuvavum, today's Salzburg, at the end of a valley, was given political rights by Emperor Claudius and during most of the IInd century it was one of the main towns of Noricum.

We may doubt whether these provinces paid for the expenses of conquest; their interest to the Empire was always primarily one of defence. Charlesworth
In general the Alpine provinces did not reach the same level of wealth of other Roman territories in Germany and France, yet the mosaic which was found at a rural villa outside Salzburg can stand comparison with those by the same subject which can be seen in richer parts of the Empire, e.g. at Paphos (Cyprus) and Thuburbo Majus (Tunisia). 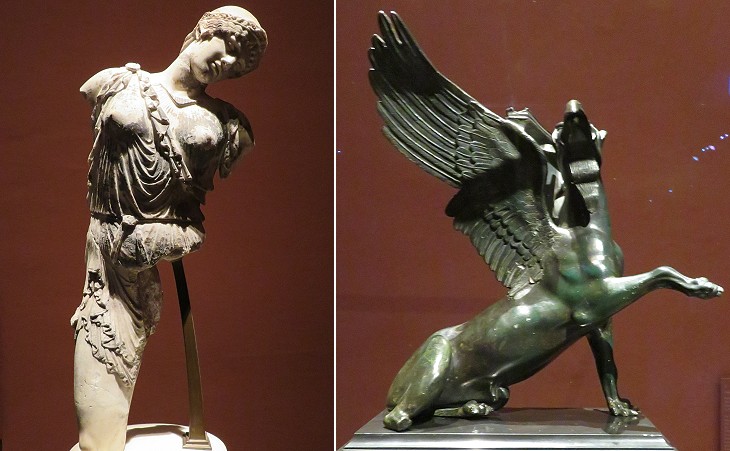 Virunum was the capital of Noricum for a period. Iron ore was quarried in its vicinity and metal production was concentrated in the town. It was close to Italy and its wealthiest citizens could easily decorate their houses with statues bought at Aquileia. In 1692 a number of funerary inscriptions were gathered in a chapel by a magistrate of Magdalensberg and the first excavations were undertaken in the late XVIIIth century; they were aimed at finding works of art and there is little documentation on where statues, inscriptions and other objects were actually found. XXth century archaeological campaigns identified the layout of the Roman town and the location of its main buildings. 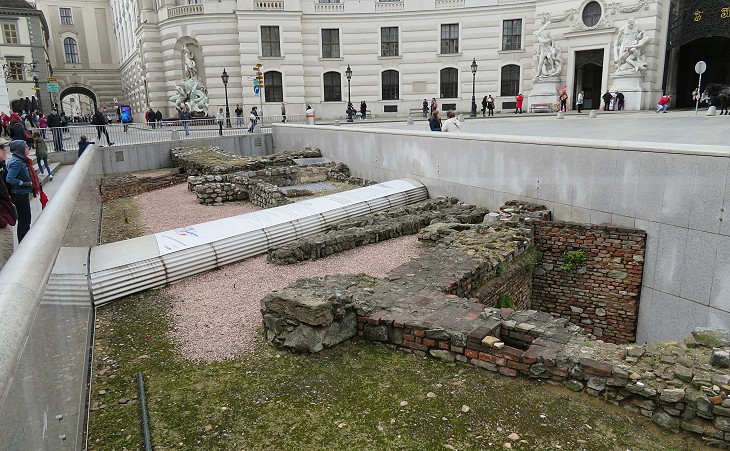 Vienna: Archaeological Area at Michaelerplatz (you may wish to see its baroque church)

The Roman past of Vienna as Vindobona, a military town, was known from several accounts by historians, but evidence of it was found only during the XXth century in some twenty sites in the city centre. The same applies to Augsburg, Roman Augusta Vindelicorum in Germany, where 17 fragments of buildings or other Roman facilities have been uncovered beneath later constructions.

Roman Museum of Augsburg: early IIIrd century AD sarcophagus depicting the handling of a large bale of cloth/wool and its recordkeeping

The town of Augusta Vindelicorum was the most brilliant and florishing of the whole district; here are found merchants of every kind, dealers in wool and clothes, sellers of purple, potters, cattle-dealers and also makers of pickles and sauces. Charlesworth
The (German) peasants are laborious, sincere, honest and hospitable as are likewise the merchants and tradesmen who are withal very complaisant.
Thomas Nugent - The Grand Tour - 1749
Many Roman sarcophagi could be classified in a "Mirror of Life" category; they are not decorated with reliefs showing gods, heroes, battles or other important events, but they depict scenes of ordinary life which show an industrious, well organized society. This type of sarcophagi or tombstones are not peculiar to a particular region, however they have been found in greater number in Germany (see also those at Trier), something which contributes to the popular image of Germans as hard-working people.
The small axe and the plumb bob on the lid of the sarcophagus can be seen also in France e.g. at Arles; the former is meant to protect the sarcophagus and the latter is perhaps a symbol of equality after death. 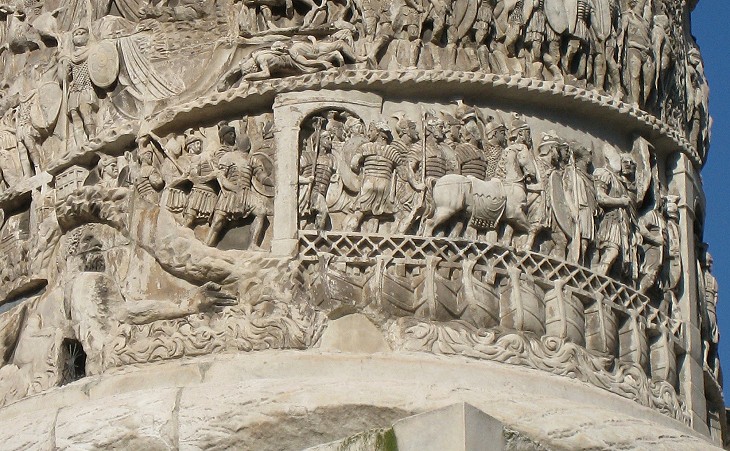 The year 162 marked the beginning of raids into the northern territories of the Empire by tribes living beyond the Danube. Marcus Aurelius was personally involved in campaigns aimed at repelling the invaders; he died at Vindobona in 180 when he was attempting to establish a permanent Roman presence beyond the Danube in today's Bohemia. In 182 his son Commodus quelled the last attacks, but he abandoned his father's plan.
In 259-260 bands of Iuthungi managed to breach the Danube border, to cross the Alps and to raid Northern Italy. The Roman control of the region was undermined by a rebellion by Postumus, the commander of the legions in Germany, who proclaimed himself Emperor of Gaul, Germany, Britain and Hispania. The secession was ended by Emperor Aurelian in 274, but the conflict greatly weakened the Roman army. 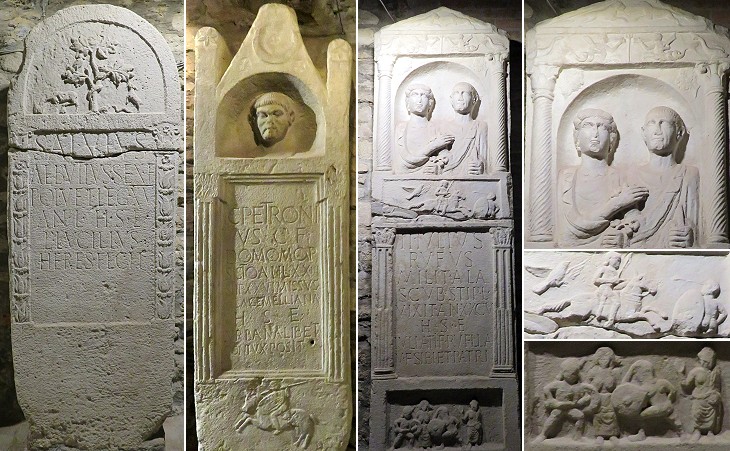 Fabricius House at Sopron (Roman Scarbantia) in Hungary: tombstones: (left) a veteran of Legio XV Apollinaris; (centre) a veteran of Ala I Gemelliana; (right) a veteran of Ala Scub(olorum) with his daughter and details of the tombstone showing a cavalryman and the fight between Eteocles and Polynices, the two sons of Oedipus who killed each other

The defence of the Rhine/Danube border required an enormous military and financial effort; it is estimated that half of the Roman army was employed in this task. The ordinary composition of a legion was complemented by alae, auxiliary troops, very often of cavalrymen who were recruited sometimes in very faraway provinces, but in other instances among foederati, allied tribes within or even beyond the border. In the long run this second approach prevailed and eventually some high-ranking military commanders were of "Barbarian" background, e.g. Arbogastes. 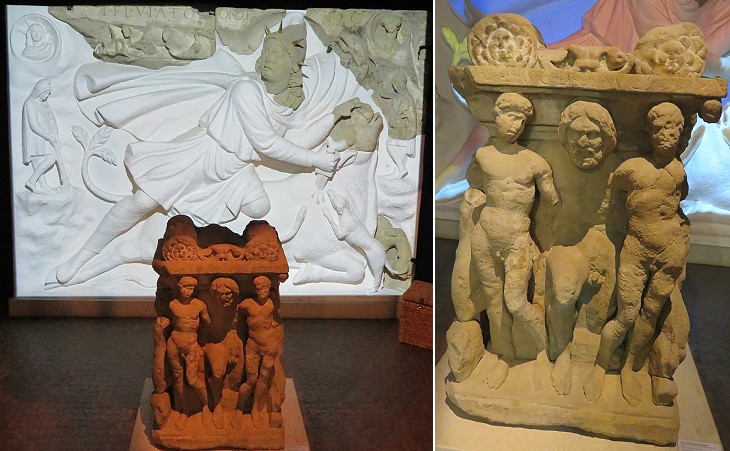 Museum Carnuntinum at Altenburg: relief from a Mithraeum found in 1894 and altar to Mithra depicting Caelus (Heaven) between personifications of Seasons

Noricum and Pannonia were among the western provinces of the Empire where the worship of Mithra spread first. The hierarchy of seven grades of initiation and the secrecy of the rites (see Mitreo di S. Prisca in Rome) appealed to the military and six mithraea were found at Carnuntum. Jupiter Dolichenus (see three statues found at Carnuntum) was another god of eastern origin who was worshipped in these provinces. 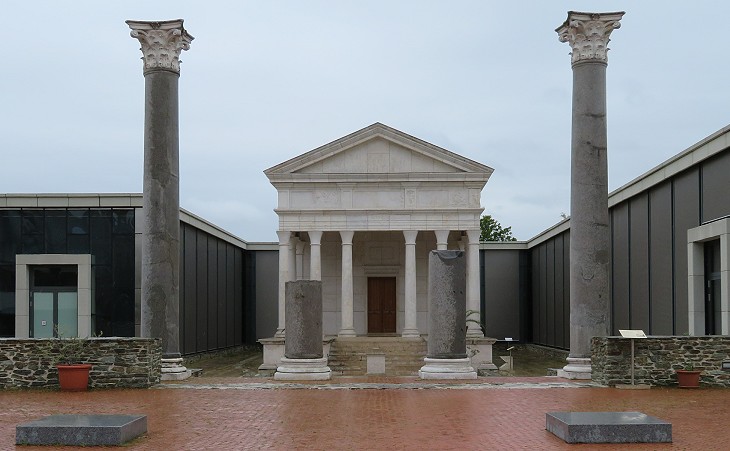 Savaria (today's Szombathely in Hungary): reconstructed (or rather brand new) Temple to Isis

In 374 the Quadi and other tribes crossed the Danube and seized and devastated Carnuntum and other Roman towns in Pannonia. They were repelled in the following year by Emperor Valentinian I. In 376 his brother Valens allowed some tribes of Goths to resettle in Moesia (Bulgaria); Valens was unable to control their moves and in 378 he was defeated and killed at Adrianople. The (Visi)Goths then moved to Italy and legions were relocated there from the Rhine border, thus favouring the invasion of Roman Germany and Gaul by Vandals, Alans and Suedi in 407. In 440 Pannonia and Noricum were conquered by Attila, leader of the Huns and actual Roman rule was never restored there. In the following centuries the plain west of the Danube was invaded or raided by Avars, Slavs, Magyars, Mongols and Turks.
The Roman presence in the region was almost entirely forgotten until the late XVIIth century, when the Habsburgs, who regarded themselves as the heirs of the Roman Emperors, began the first archaeological excavations, because practically no major Roman monuments were visible above ground, exception made for the arch at Carnuntum which is shown in the icon for this section.
The image used as background for this page shows a relief depicting the Roman she-wolf at the Savaria Museum of Szombathely.