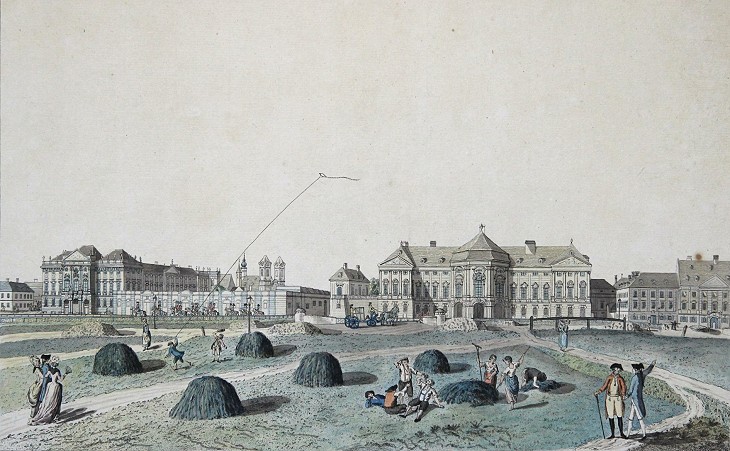 (left to right) Trautson Palace, Ulrichskirche and Auersperg Palace in the Alser neighbourhood in a 1780 print (see a map of 1730 Vienna)

The palaces of the suburbs in general are grander than those of the city and they have both court yards and gardens.
Thomas Nugent - The Grand Tour: A Journey Through the Netherlands, Germany, Italy and France - 1749
The political, economic and demographic development of Vienna after the 1683 Siege led some of the most prominent families of the city to build a second residence immediately across the meadows which surrounded the walls. There they spent the summer and entertained their guests. 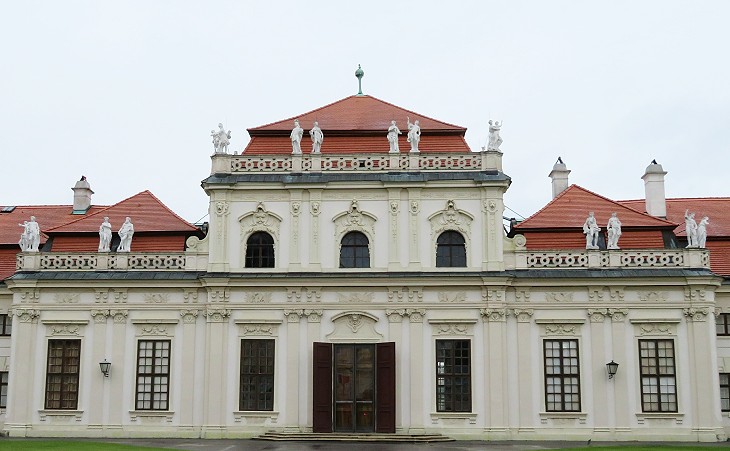 The largest villa outside the walls was built for Prince Eugene of Savoy, victorious commander of the Imperial Army in two wars against the Ottomans and in the Spanish Succession War. It was his summer residence which complemented his city palace. It was built in two stages on the slope of a hill to the south-east of the walls; it was known as Belvedere, because it commanded a grand view over Vienna, a term which was first used for a Renaissance villa in Rome and then adopted for other buildings, e.g. at Prague and Florence. The Lower Belvedere was built in 1716, the Upper Belvedere in 1722. The complex is covered in more detail in a separate page. 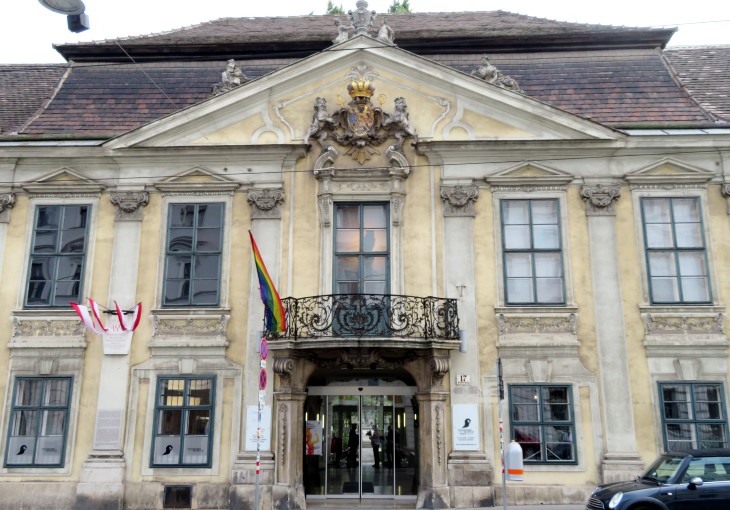 (September 1716) Count Schoonbourn's villa is one of the most magnificent; the furniture all rich brocades, so well fancied and fitted up, nothing can look more gay and splendid; not to speak of a gallery, full of rarities of coral, mother of pearl, and, throughout the whole house, a profusion of gilding, carving, fine paintings, the most beautiful porcelain, statues of alabaster and ivory, and vast orange and lemon trees in gilt pots.
Letters of the Right Honourable Lady Mary Wortley Montague: Written during Her Travels in Europe, Asia and Africa to Persons of Distinction, Men of Letters, &c. in Different Parts of Europe
While the Belvedere is almost untouched by the development and modernization of Vienna, other villas suffer from being today right on the edge of a very busy road, without that countryside background which enhanced their elegant design. 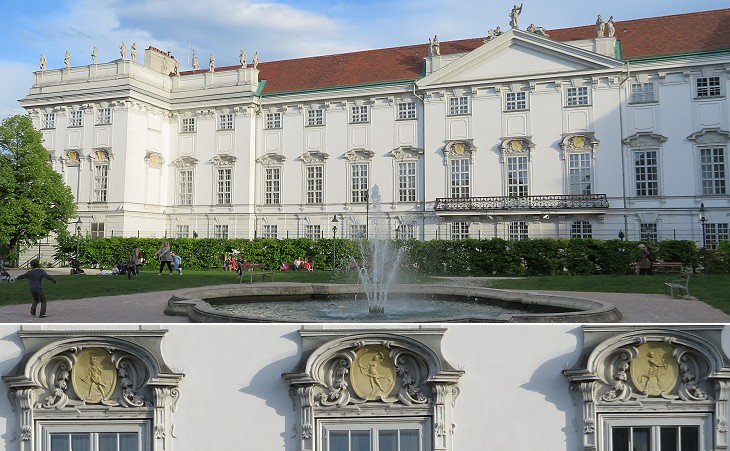 Trautson palace: (above) "lateral" view; (below) details of the windows with stuccoes depicting mythological episodes and personages

The Trautson were a family of the Erblande, the Austrian Habsburg "hereditary" lands (Bohemia, Austria and Carniola, today's Slovenia). At the court of Emperor Charles VI, Johann Leopold Donat von Trautson was second in rank, immediately after Prince Eugene of Savoy. Johannes Joseph, son of Johann Leopold, became the second Archbishop of Vienna in 1751 and received the cardinal hat in 1756.
Trautson Palace has lost its private gardens, but it is not suffocated by new buildings and congested roads. It was designed in 1710 by Johann Bernhard Fischer von Erlach, the leading architect of the time, with a flat roof and a long balustrade, but because weather conditions were pretty different from those prevailing in Italy, it was eventually given a pitched roof. 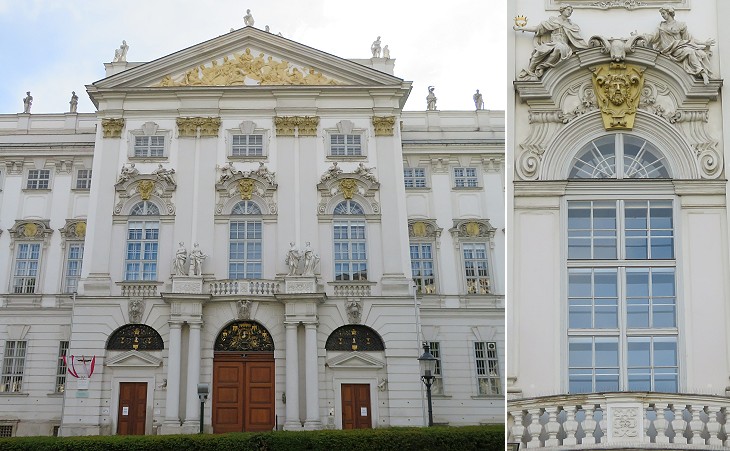 The main façade is actually a lateral one, but because it was facing Vienna it was decorated in a grand manner. The architect, notwithstanding the richness of the decoration, gave it a classical composure. 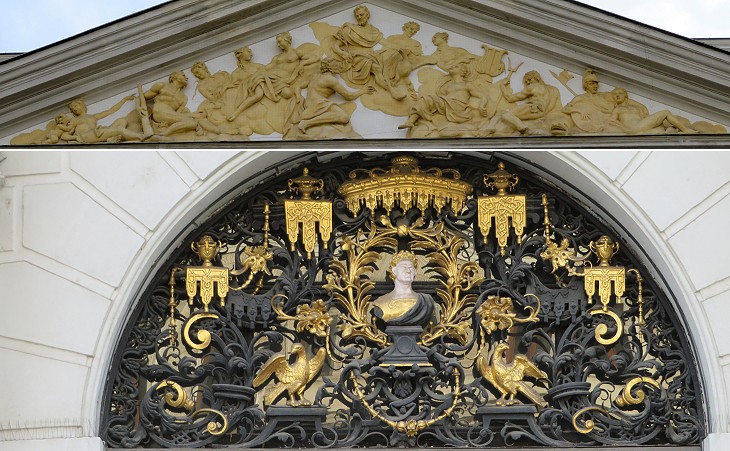 Trautson Palace: (above) relief of the tympanum; (below) detail of the portal

The purpose of the building is clearly spelt out in the decoration of the tympanum: the Trautson met their guests to play some good music, to listen to some distinguished poets and ... to do some other things. They did not enjoy their villa for a long time, because in 1760 it was bought by Empress Maria Theresa who assigned it to her Hungarian Guard. It is currently utilized by the Ministry of Justice. 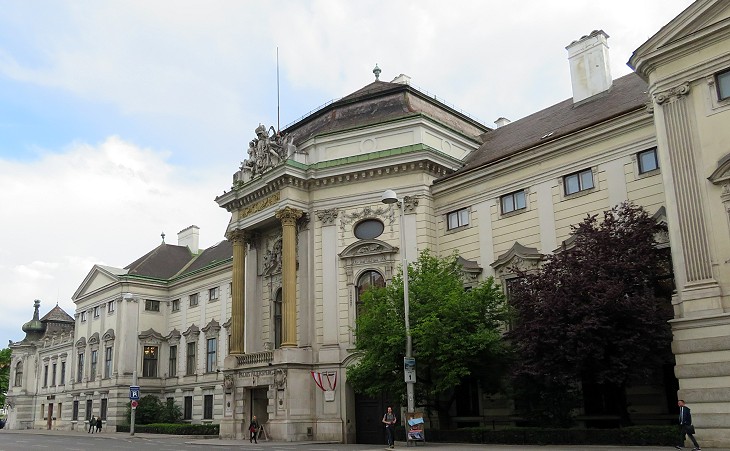 Auersperg Palace; a detail of its decoration is shown in the image used as background for this page

At the Easter of 1773 Count Auersperg, the Governor of Trieste, was recalled to Vienna.
The Memoires of Casanova, by Jacques Casanova de Seingalt. Translation by Arthur Machen
In 1777 Count Auersperg bought a villa which was built in 1710 for Hieronymus Capece di Rofrano. The central part which projects from the façade was designed in 1722 by Johann Christian Neupauer. The history of the palace is associated with music as it housed first performances of operas by Gluck and Mozart, a tradition which continues to the present day because one of its halls is a venue for concerts. In 1911 Richard Strauss wrote Der Rozenkavalier, a comic opera set in 1740 Vienna: the male protagonist is an imaginary Count Octavian Rofrano, a clear reference to the Rofrano of this palace. Most of the XVIIIth century palaces and churches are now surrounded by modern constructions, because the suburban neighbourhoods where they were built have become highly priced commercial districts. A few streets around Ulrichskirche retain their old peaceful atmosphere; an elegant house in the street flanking the church is still decorated with the portraits of Empress Maria Theresa (dressed as an XVIIIth century lady) and her husband Emperor Francis I Stephan of Lorraine (wearing ancient Roman garments), or perhaps her son Emperor Joseph II with whom she shared power for fifteen years (1765-1780). Another house is decorated with a bust of Emperor Joseph II. 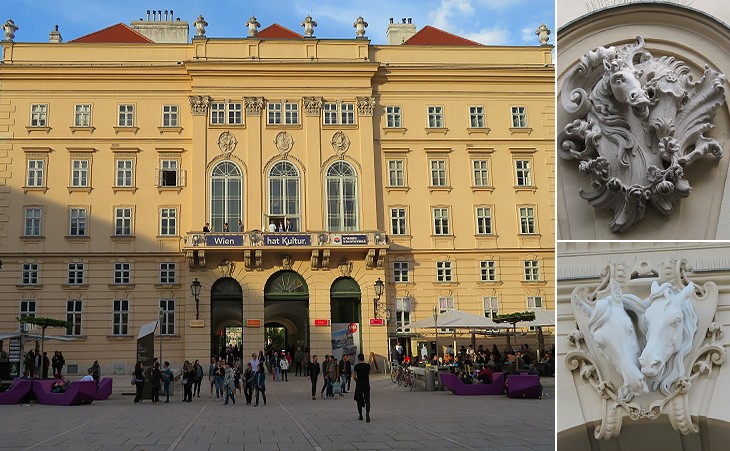 Another interesting XVIIIth century palace outside the walls was designed by Johann Bernhard Fischer von Erlach and his son Joseph Emanuel in 1719-23 to house the imperial stables. It is an immense building because it was enlarged in the XIXth century; its many entrances and also the internal archways have all the same decoration, although with variations which reflect changes in artistic tastes, from frivolous Rococo to sober academicism. 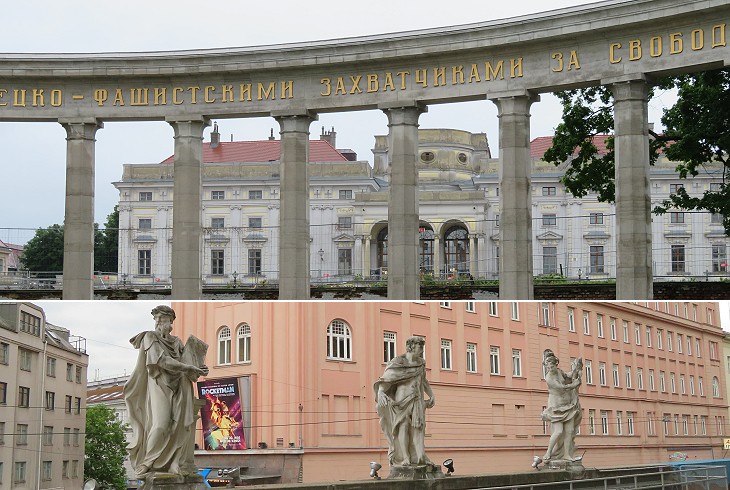 (above) Schwarzenberg Palace behind the 1945 Monument to the Russian Soldier; (below) statues which decorated the entrance to the gardens of the former Kaunitz Esterhazy villa at Mariahilf

Other large XVIIIth century villas outside the walls have either been demolished or have not yet fully recovered from the damage they suffered during WWII and its aftermath.
Schwarzenberg Palace was built in 1697-1728 and it rivalled in size and gardens with the adjoining Belvedere Palace; today part of the building is used by a luxury hotel. Next to it a niche houses a statue of St. John Nepomuk.
In the Faubourg Mariahilf is the Esterhazy Summer Palace, let in 1837 to the Turkish Ambassador, who permits strangers to see the gallery. (..) The Esterhazy Picture Gallery includes no less than 50 examples of masters of the Spanish school, which are rarely found in other collections out of Spain. Many of them, it is true, are not first-rate. (..) The Sculpture Gallery contains some excellent works of modern artists, as Canova (bust of Napoleon), Thorwaldsen, Schadow, Bartolini and others. The collection of engravings exceeds 50,000 in number and ranks in excellence third among those in Vienna, and the drawings by celebrated old masters amount to several thousands.
A Handbook for travellers in southern Germany by J. Murray - 1837
Only a few statues remain of a large villa which was named after the Kaunitz, who owned it during the second half of the XVIIIth century, and the Esterhazy, who bought it in 1814. Wenzel Anton, Prince of Kaunitz-Rietberg (1711-1794), was State Chancellor for more than forty years. Nikolaus II Esterhazy (1765-1833) was a very wealthy Hungarian prince. He gathered a large art collection in his Mariahilf villa.