You may wish to read an introduction to this section or see pages on Roman and Medieval Verona first. 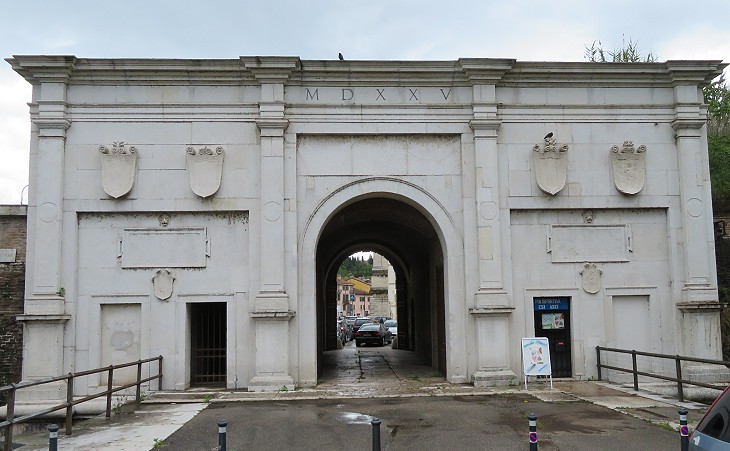 Verona is strong by situation, and extraordinarily fortified with walls, bastions, towers, bulwarks, and deep ditches full of water drawn from the River Athesis round about, and strengthened with 3 Castles.
John Ray - Observations (..) made in a journey through part of (..) Italy in 1663
Verona is fortified after the modern way (..) tho' the fortifications of late have been much neglected.
Thomas Nugent - The Grand Tour - 1749
The outworks of the Scaligerian walls were begun by the Venetians about 1520, according to the plans of several engineers. Ultimately they were completed by, or at least after the plans of, the celebrated Michele di San Micheli, commonly called Sanmicheli (born at Verona 1484), who was the author of the science of modern fortification.
John Murray - Handbook for Travellers in Northern Italy - 1852
Verona has preserved a remarkable number of monuments from antiquity, the medieval and Renaissance periods, and represents an outstanding example of a military stronghold. (..) As far as the fortified town is concerned, the defence system has been well preserved through the continuity of its military use over time. Surviving evidence of the fortified town, such as Roman gates and Renaissance bastions, reflect this long military history.
From the UNESCO synthesis of the universal value of Verona which in 2000 was included in the World Heritage List. 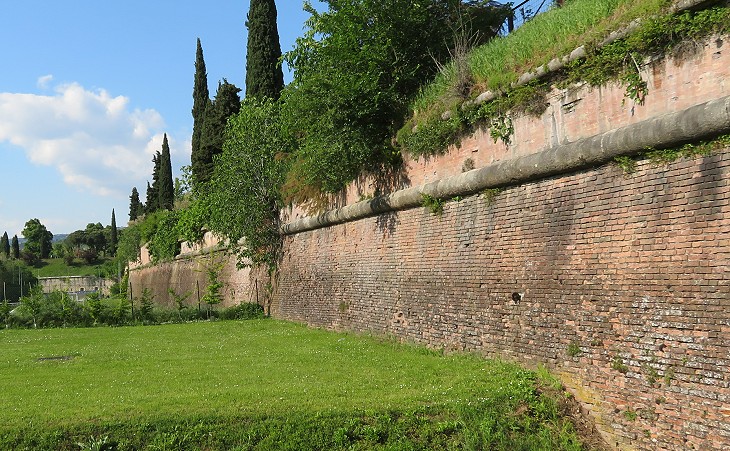 In May 1453 the use of large-calibre cannon by the Ottomans was a decisive factor in the Fall of Constantinople. It also marked a turning point in military architecture. The Ottoman threat led to the design of new fortifications based on wide ramparts and projecting bastions at Rhodes, on many Venetian possessions in Greece and even near Rome (at Nettuno and Civita Castellana). In 1509 a quarrel between the Republic of Venice and Pope Julius II developed into a war in which the Republic temporarily lost all its Italian territories. The Venetian Senate realized that an effective system of fortifications was required to protect the Republic at a time when France and Spain were competing for hegemony in Italy. 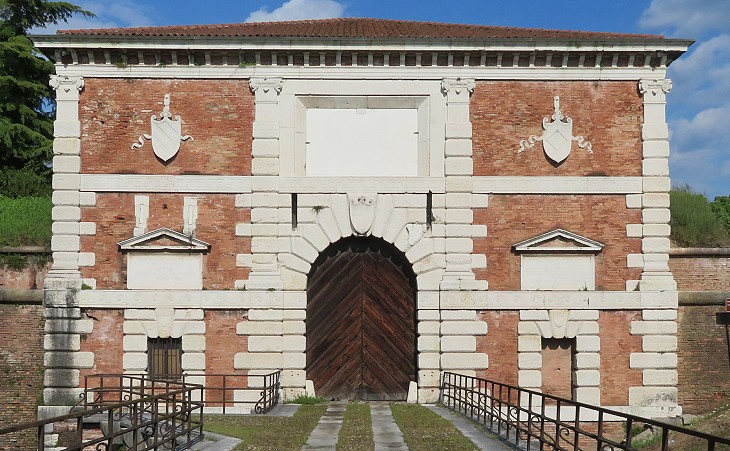 Porta San Zeno (1542); the image used as background for this page shows a decorative detail of the gate

In 1530 Michele Sammicheli, an architect from Verona who had spent many years in the Papal State where he worked with Antonio da Sangallo the Younger, from a family of military architects, was commissioned to redesign the walls and gates of Verona. In 1534 he was asked by the Venetian Senate to do a survey of the fortifications of the Republic and to make recommendations for their improvements. One of his major project led to the construction of new walls at Candia (Iraklion). Their design was so effective that they withstood an Ottoman siege for more than 20 years in 1648-1669. Forte S. Andrea at the entrance to the Lagoon of Venice is another work by Sammicheli.
During the Austrian tenure of Verona (1814-1866) the fortifications of the town were strengthened by the construction of outer works, similar to those which can still be seen at Palmanova. They were eventually demolished to permit the expansion of the town. 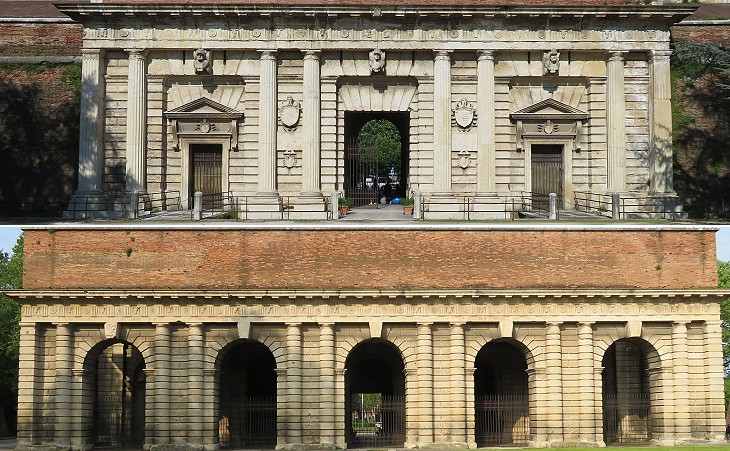 The most beautiful gate, which, however, always remains closed, is called "Porta stupa" or "del Pallio". As a gate, and considering the great distance from which it is first seen, it is not well conceived, and it is not till we come near it, that we recognise the beauty of the structure. All sorts of reasons are given to account for its being closed. I have, however, a conjecture of my own. It was manifestly the intention of the artist to cause a new Corso to be laid out from this gate, for the situation, or the present street, is completely wrong. On the left side there is nothing but barracks; and the line at right angles from the middle of the gate leads to a convent of nuns, which must certainly have come down. This was presently perceived, and besides the rich and higher classes might not have liked to settle in the remote quarter.
J. W. Goethe - Italian Journey - September 16, 1786 - translation by Charles Nisbeth
Then he turned back, and seemed like one who runs for the green cloth, at Verona, through the open fields.
Dante - Inferno - Canto XV - translation by A. S. Kline.
The Gate used to be open only on occasion of the Palio del Drappo Verde, an event consisting of a speed race; the winner was awarded a green banner. It was last run in 1795. 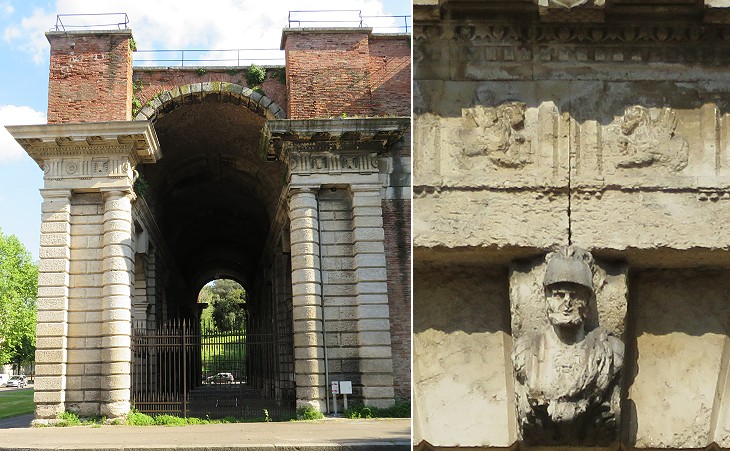 Porta Palio: (left) portico of the town side; (right) a detail of the external side which retains evidence of the Winged Lion of Venice

During his travels in Greece, Sammicheli had the opportunity to see some ancient temples, probably those of Egina and Cape Sounion, in addition to the Parthenon and he adopted their Doric style for the decoration of Porta Palio.
Nay, while I would fain bring the whole city before my reader's fancy, I am loth and afraid to touch anything in it with my poor art: (..) even the white-coated garrison (now there no more), with its heavy-footed rank and file, its resplendent officers, its bristling fortifications, its horses and artillery, crowding the piazzas of churches turned into barracks.
William Dean Howells - Italian Journeys - 1867, but based on a visit he made in 1864
The Austrian army wore white uniforms until 1867. Verona and Veneto became part of the Kingdom of Italy in October 1866. 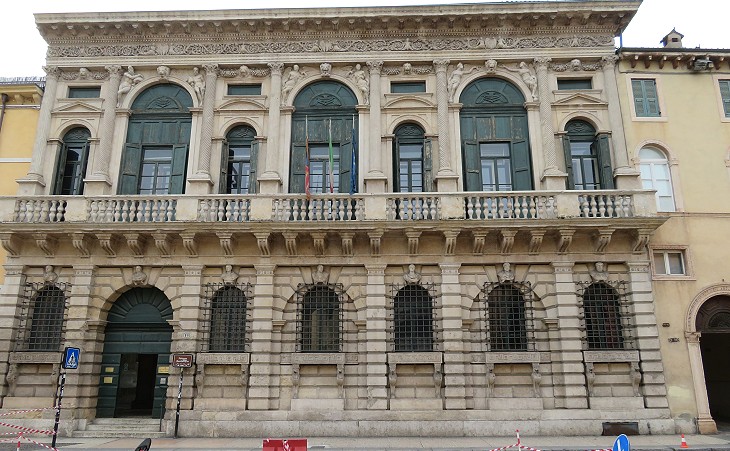 Generally speaking, the "nobili" build a great deal, but unfortunately every one builds on the site of his former residence, and often, therefore, in narrow lanes. Thus, for instance, a magnificent façade to a seminary is now building in an alley of the remotest suburb. (..) The Bevilacqua Palace contains the most valuable things. (..) The collection of antiquities is very fine; there is a son of Niobe extended in death, which is highly valuable. Goethe
The activity of Sammicheli was not limited to military architecture. In his youth he was involved in the design of S. Margherita at Montefiascone and a fine loggia at Sebenico is attributed to him, together with some palaces and churches at Verona. 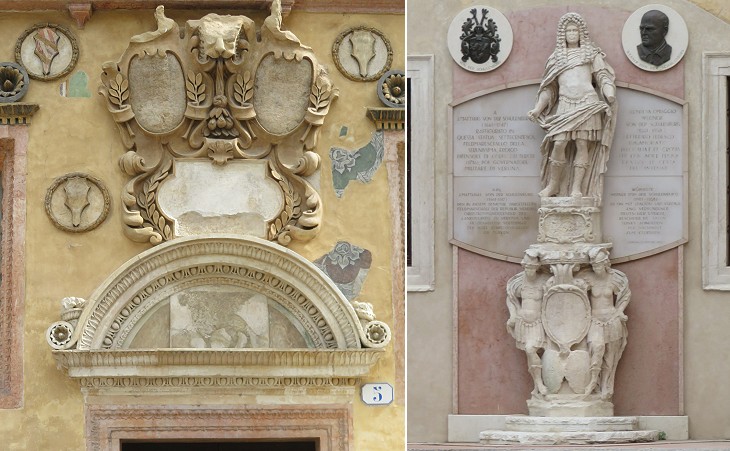 (left) Erased symbols and inscriptions of the Republic of Venice at Palazzo della Ragione; (right) Monument to Johann Matthias Count von Schulenberg, the hero of the defence of Corfu at Palazzo di Cansignorio

In 1796, during the War of the First Coalition, the Republic of Venice declared its neutrality, but allowed French and Austrian troops to enter its territories. The French gained access to Verona peacefully, but their behaviour eventually led to a revolt in April 1797. This was easily quelled, but Napoleon considered it an act of war and sent an ultimatum to the Doge of Venice requesting his abdication and the formal dissolution of the Republic which occurred in May 1797. All the Venetian inscriptions, coats of arms and reliefs of winged lions which decorated the gates of Verona and its other monuments were erased.