You may wish to read an introduction to this section or pages on Roman or Early Christian Aquileia first. 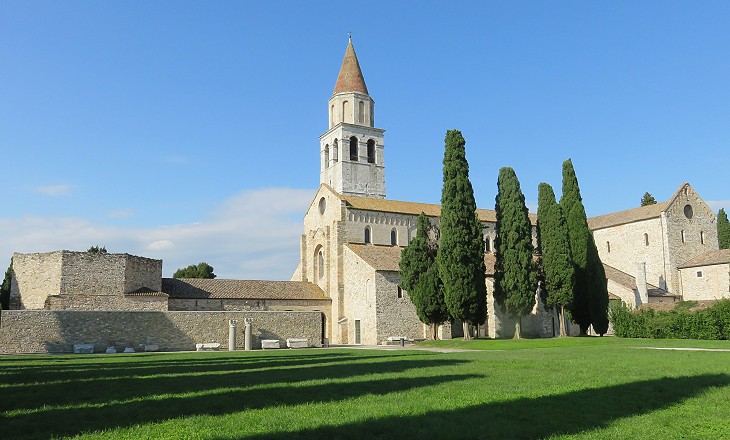 Overall view of the Basilica including the Baptistery (far left)

The fire set to Aquileia by Attila in 452 marked the end of the city as a trading centre and caused a major decrease in its population. It did not impact however on the importance of its Archbishops who were at the head of a group of dioceses. In 554 the Archbishops of Milan and Aquileia did not agree with the outcome of the Second Council of Constantinople and in 557 the Archbishop of Aquileia declared he did not recognize any superior authority in religious matters. In 568 when the Longobards invaded Italy the Archbishop moved his residence to Grado, a small port on an islet south of Aquileia, which was still controlled by the Byzantines. The Archbishop assumed the title of Patriarch to indicate he regarded himself as having the same authority as the Patriarchs of Rome and Constantinople.
In 606 the Patriarchate of Aquileia split into two as a consequence of the political division of Italy. The Patriarch residing at Grado had authority over the coastal strip of the northern Adriatic Sea (inclusive of the Lagoon of Venice) which was controlled by the Byzantines. The Patriarch residing at Aquileia was the religious head of a large inland territory. Actually he often resided at Cividale del Friuli (former Forum Iulii), a fortified town at the foot of the Alps.
In 811 Charlemagne issued a bull which defined the territory subject to the Patriarchs of Aquileia, who soon after decided to return to Aquileia where they began the construction of a large church on the site of halls built in the early IVth century by Bishop Theodore. 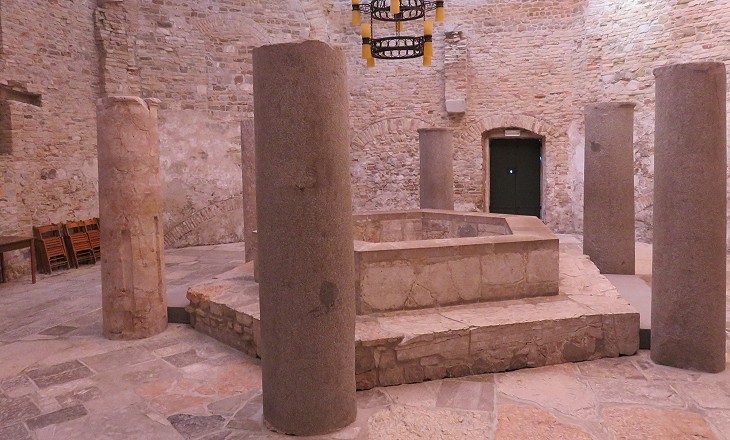 Reconstructed interior of the Baptistery

A door admits to the roofless baptistery, an octagonal building with a small apse in the south-east side next the entrance. This building has undergone so many changes and is now in such a state of decay that it is difficult to restore the original design even in imagination. (..) There was a large font in the centre, intended probably for immersion of adult converts, which was surrounded by an arcade of pillars and arches. The arcades were in turn inclosed by the main walls of the baptistery, and united to them by buttress arches spanning the intervening space. But there are now only six columns, and it seems improbable that this incongruous arrangement of a hexagon within an octagon should be original.
Sir Thomas Graham Jackson - Dalmatia, the Quarnero and Istria - 1887
Sir Thomas Graham Jackson (1835-1924) was one of the leading architects of his time. He visited Aquileia in 1885 and he wrote a very detailed account of its Patriarchal Basilica. 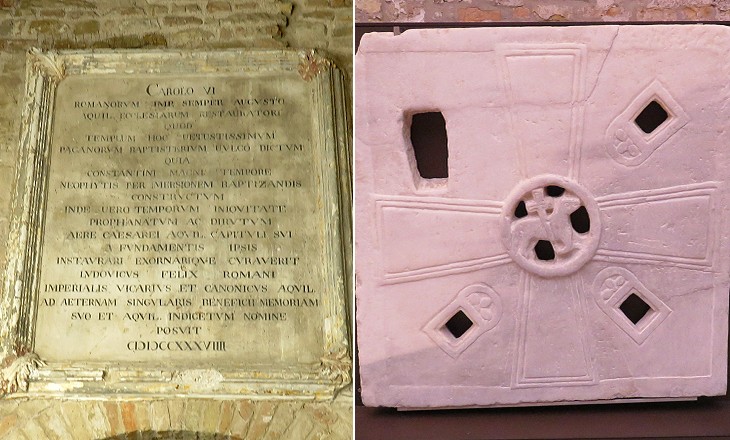 A major reconstruction of the Baptistery was carried out in 1739. The inscription says that the Baptistery was believed to have been built at the time of Emperor Constantine (IVth century) neophytis per imersionem baptizandis (to baptize catechumens by immersion). The Baptistery instead was built in the early IXth century when immersion baptism was no longer common in Italy. The error in dating the building might have led to assembling ancient stones and columns to form a hexagonal basin which never was there. 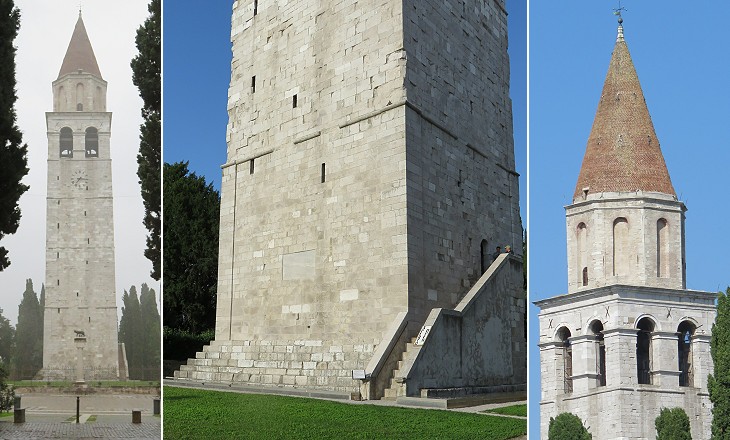 The IVth century Bishops of Aquileia were renowned for their theological knowledge, those of the XIth century for the wars they waged to increase their power and enlarge the Patriarchate.
The patriarchs of Aquileja had by the XIth century become great secular princes of the empire as well as great ecclesiastical dignitaries. (..) The rival patriarchate of Grado at his very door was a constant offence to Patriarch Poppo. (..) In 1024 Patriarch Poppo advanced to Grado with an armed force. The citizens stood on the defensive and prepared to oppose his landing, but he calmed their fears by swearing to abstain from all hostile attempts on the city, and was allowed to enter it without opposition. No sooner, however, was he within the city than his followers began to profane the churches and outrage the ministers. Altars were thrown down, the sacred virgins were violated, the priests slain, the bones of the dead were dug up, the churches and houses were plundered, all the relics that could be found were appropriated and carried off, and the island was left in charge of a garrison of Aquilejan soldiers. T. G. Jackson
Patriarch Poppo (Wolfgang von Treffen, most likely a relative of German Emperor Conrad II) erected the imposing bell tower, which was meant to be the visible sign of his power, next to the Basilica he was in the process of rebuilding. 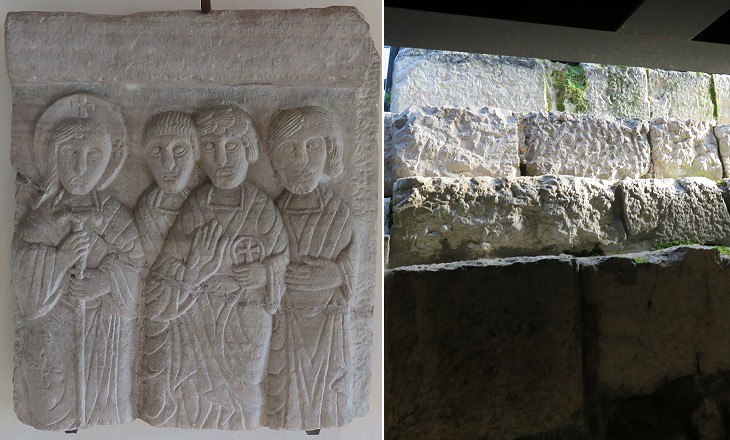 (left) Museo Paleocristiano: fragment of the XIth century decoration of the Basilica portraying Jesus Christ with a pastoral staff and St. Peter holding an eucharistic loaf (marked by a Cross); (right) base of the bell tower seen from the passage between the two halls built by Bishop Theodore

The bell tower satisfied the pride of Patriarch Poppo and provided Aquileia with its current major landmark, but it was built with the stones of the amphitheatre/theatre of the ancient town. In addition it destroyed the mosaics of one of the halls built by Bishop Theodore. To the credit of Poppo one must list a series of reliefs celebrating the Millennium from the Passion of Jesus Christ. Interior of the Basilica: (left) pointed arches and the so-called circular Chapel of the Holy Sepulchre; (right) XIVth century capitals

The pointed arches of the nave arcades, which have taken the place of the round ones once borne by Poppo's columns and capitals, are probably the work of Patriarch Markquard of Randeck, who remodelled the church between 1365 and 1381, after its partial destruction by earthquake in 1348. T. G. Jackson
Marquard of Randeck was another Patriarch of German origin. He engaged in continuous wars with the Republic of Venice. In particular during the War of Chioggia (1378-1381) he attacked the Venetian possessions in Istria and captured Pola, which eventually he was forced to return to Venice. He maintained however Trieste. 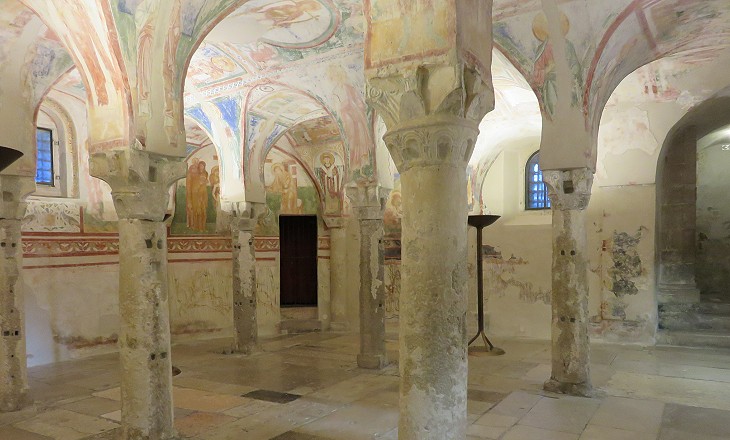 Below the choir is a crypt which it is just possible may have belonged to an older church than Poppo's. It is groined (curved edge) Roman fashion without ribs, and the vaults are covered by early paintings of various dates. The capitals have a romanesque character, which is not consistent with the theory that the crypt was built in the fourth century, and points rather to the tenth or eleventh. T. G. Jackson
Today the crypt is dated ninth century, although some of its walls are of the Roman period. According to tradition it was the prison of the first Christian martyrs of Aquileia. It was eventually used to house the Treasury of the Patriarchate. 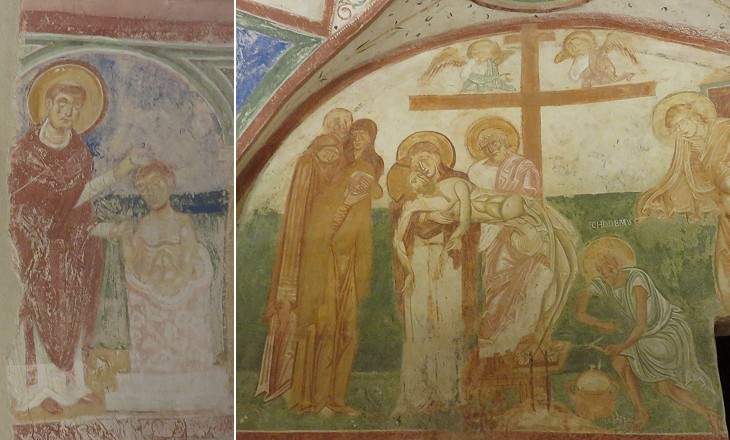 Crypt: details of its frescoes: (left) St. Mark baptizing one of his first followers; (right) Deposition of Jesus Christ

The frescoes are dated XIIth century, after the reconstruction of the basilica by Patriarch Poppo. They are not without vigour of expression, especially in the group of four women watching the Deposition. Frescoes were not often used in the region because of dampness. The image used as background for this page shows a fresco from the church of the Benedictine nunnery at Monastero. 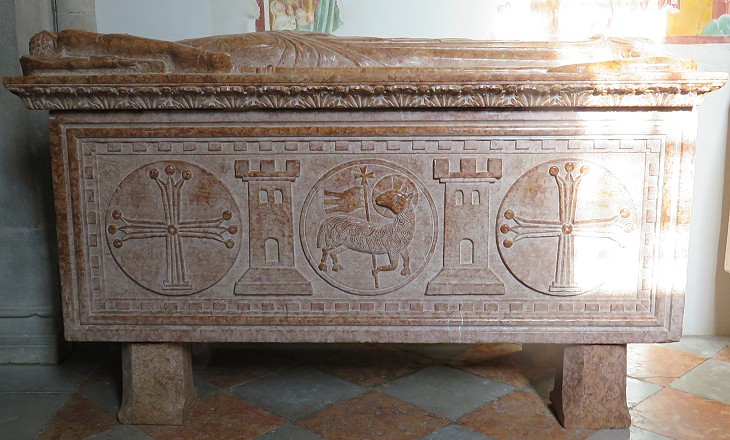 A Gothic chapel (..) contains several tombs of the family Della Torre, which for a long time enjoyed the Patriarchate. To the east next the altar is a plain chest of red marble containing the bones of Patriarch Raimondo della Torre, who died in 1298. Next to him in a red marble sarcophagus lies Patriarch Pagano della Torre, the friend of Dante. The front of his ark has in the centre an Agnus Dei within a circle, and crosses within other circles divided by a torre (It. torre means tower)! T. G. Jackson
The sarcophagi are without inscriptions. Today that with the Agnus Dei is believed to be that of Raimondo della Torre (and not of Pagano as assumed by Jackson). The Della Torre were a family from Milan and they had been ousted from there by the Visconti in 1312. Ludovico, the last Della Torre Patriarch, had to cope with the growing threat of the Habsburg Dukes (and later on Archdukes) of Austria. In 1452 the Archduke of Austria was elected Holy Roman Emperor Frederick III. 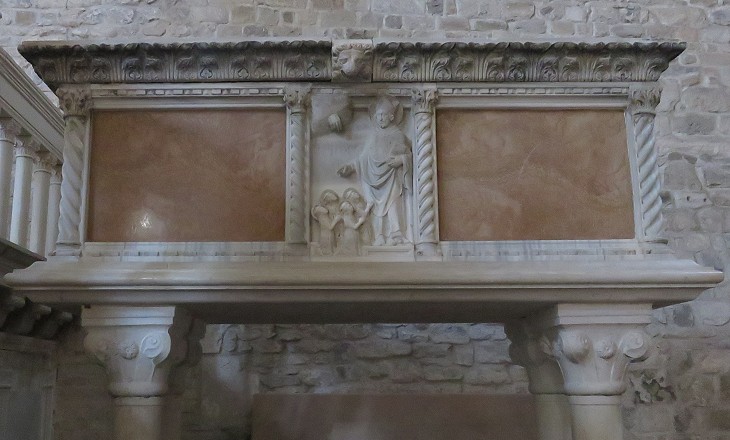 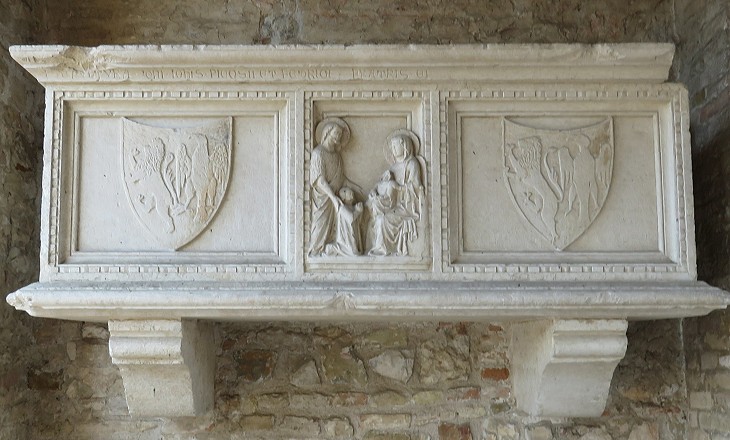 In 1751 Pope Benedict XIV agreed to the joint request of the Republic of Venice and of Empress Maria Theresa of Austria to put an end to the Patriarchate of Aquileia. Its remaining territory was split between the dioceses of Udine (Venetian) and Gorizia (Austrian). A few years earlier Giandomenico Bertoli published Le Antichità d'Aquileja profane e sacre, the first detailed account of the Basilica and of the Roman relics of Aquileia. According to this book Federico Picossio was a supporter of the Della Torre. The wing-spanned eagle of his coat of arms was perhaps that of the Patriarchate. 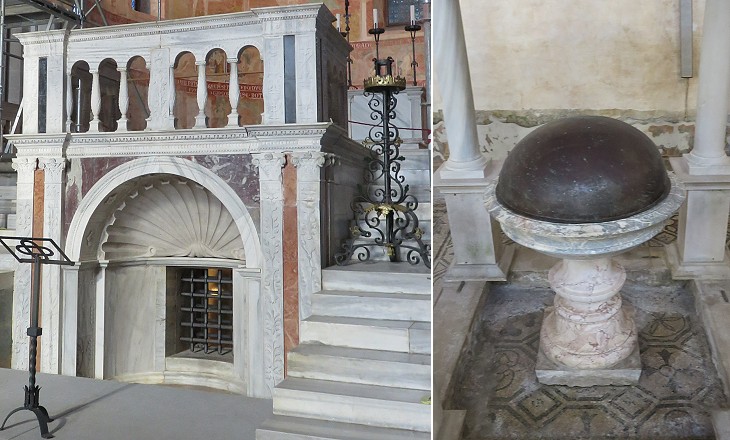 The grandest feature in the church is undoubtedly the magnificent ascent to the choir by two flights of wide steps right and left of a central rostrum or pulpit (..) and right and left of the stairs is a rich podium forming part of the front of the raised choir, and crowned by a handsome balustrade. The whole is in the best style of the early period of the Renaissance; the central part especially is the work of a master hand, and I know few compositions of the kind purer in their detail or more magnificent in conception.T. G. Jackson
The podium is attributed to Bernardino da Bissone, a sculptor who was active in Venice and other nearby locations between 1490 and 1521. 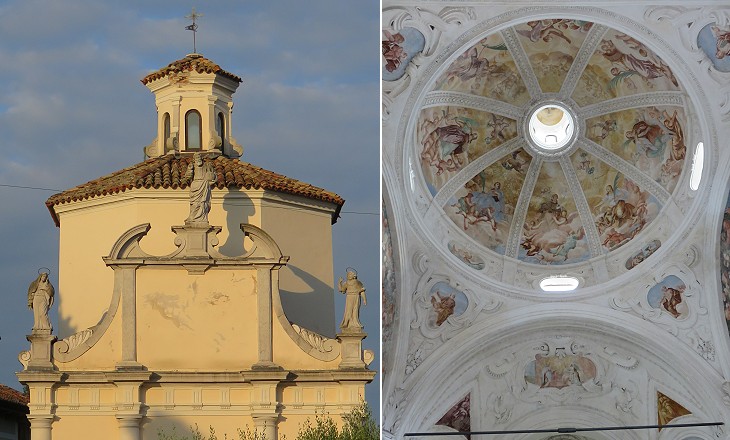 S. Antonio: (left) upper part of the façade and octagonal dome; (right) frescoes of the dome attributed to Ludovico Dorigny, a French painter who spent most of his long life (1654-1742) in Italy

The Basilica was too large for the small population still living at Aquileia and a small church was built in ca 1695 in typical Baroque style. It is situated in what had become the centre of a small hamlet on one side of the River Natisone. It was navigable by small boats and the inhabitants of the hamlet could go fishing into the lagoon of Grado. 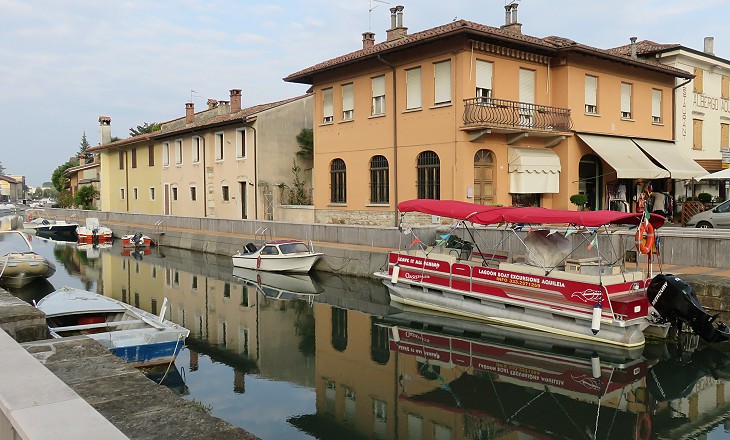 When Jackson visited Aquileia he found only a very few houses near the Basilica. Overall things have not changed much: a couple of small hotels, a coffee-shop, two or three restaurants is all the business linked to the monuments of Aquileia. Nearly all of the visitors come on a day trip from the seaside resorts of Grado, Lignano and Bibione.