You may wish to read an introduction to this section first.
(July 1675) Upon the shore of Istria, is Ruigna, situated upon a little Peninsula, and inhabited altogether by Sea-men, who are most of them profess'd Pilots; and for their encouragement, all Ships, whether Venetians or Strangers, are obliged to touch there, and to take a profess'd Pilot of this place, to Steer them over the Flats that are before the entrance into the Venetian Harbours, which are very difficult and dangerous. I heard the Pilot say, that conducted the Vessel I return'd in, that it had sometimes but half a Foot, and sometimes not above an Inch of Water below its Keel. Ruigna hath a very good and secure Haven, and that by nature, without the help of Art. The Country about it is fruitful in excellent Wines and Oyl. (..) The Town is not big, but seems populous.
A journey into Greece by George Wheler, Esq., in company of Dr. Spon of Lyons - 1682 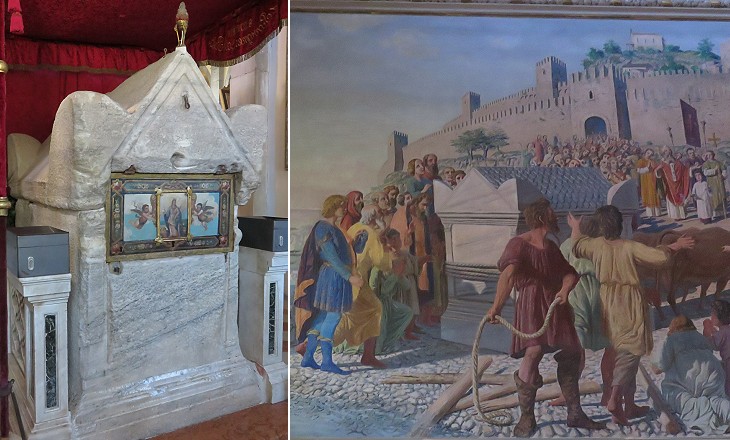 S. Eufemia (main church of Rovigno): (left) ancient sarcophagus assumed to contain the relics of St. Euphemia; (right) 1883 fresco by Leonardo Riga showing the sarcophagus being carried into the town

A Roman settlement known as Arupinum or Ruginium is recorded as a vicus, a village, of Pola. It attracted refugees from inland locations when the region was invaded by the Avars and the Slavs, because it was situated on an islet. The only memory of the Roman past of Rovigno is a roughly cut sarcophagus which according to tradition washed ashore in 800 with the relics of St. Euphemia of Chalcedon, a IVth century martyr. The Greek Orthodox Church maintains that the relics are in the Church of St. George, inside the Patriarchate of Constantinople. 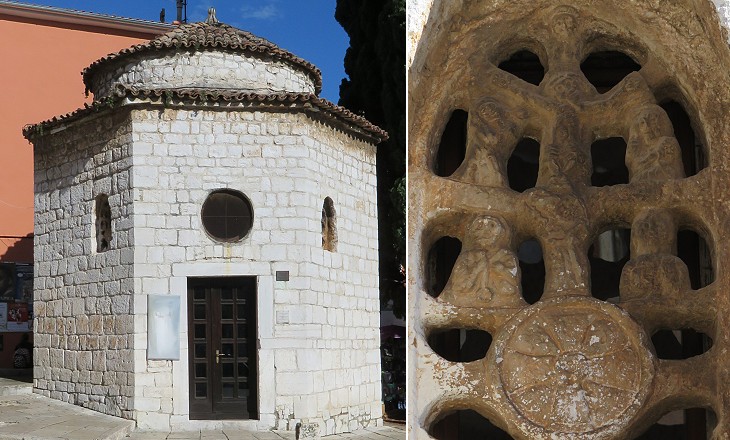 (left) SS. Trinità; (right) Crucifixion in one of its windows

This small heptagonal building, which eventually was utilized as a baptistery, is dated ca VIIIth century and it stands outside the town walls near the site of the bridge which linked Rovigno to the mainland. After the Roman period the town was first recorded in a chronicle of 804. 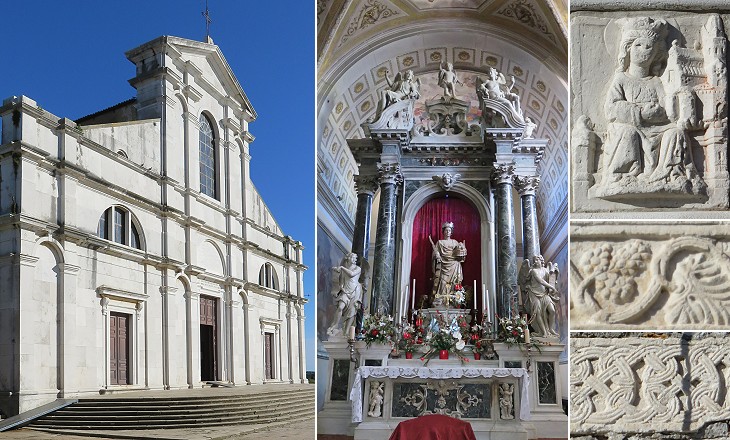 The only place of any consequence on the coast between Pola and Parenzo is Rovigno, a flourishing town occupying a lofty peninsula between two harbours. A large modern church with a campanile crowns the summit of the pyramidal hill, the sides of which are covered by the houses of the town. The general view from the sea is extremely picturesque, but Rovigno contains nothing to make it worth while to go ashore. The church (..) is spacious and handsome, but quite uninteresting, and the town itself is devoid of any architectural remains in its narrow and tortuous streets, though here and there the Lion of St. Mark has survived.
Sir Thomas Graham Jackson - Dalmatia, the Quarnero and Istria - 1887
Notwithstanding the relics of St. Euphemia, Rovigno was not a bishopric see and during the Middle Ages this meant a second class status for the town. 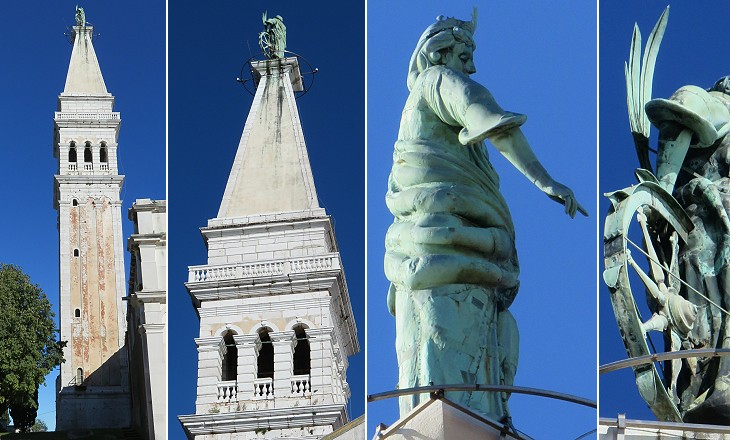 S. Eufemia: bell tower and details of the rotating statue of St. Euphemia, which acts as a weathervane. The wheel refers to a torture endured by Euphemia (you may wish to see a page on Torture and Death in the Churches of Rome)

The bell tower was completed in 1758 when a gigantic bronze statue of St. Euphemia was placed at its top. It is similar to those existing at Grado and other towns belonging to the Republic of Venice. Unlike nearby Parenzo, Rovigno did not experience a decrease in population because of pestilences in the XVIIth century and in 1763 the channel which separated the islet from the mainland was filled in order to enlarge the town. 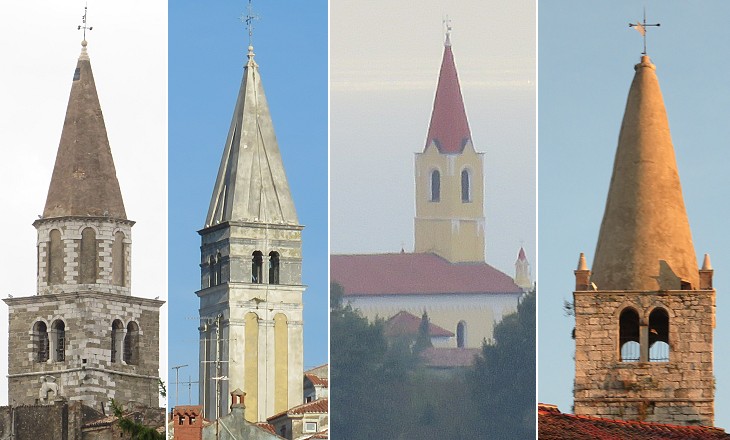 The towns of Istria competed for having the tallest and finest bell towers which all resemble those of Venice, such as that of S. Giorgio Maggiore. They provided useful reference points for seamen, in particular those of Buie which is situated at the top of a hill with a commanding view. 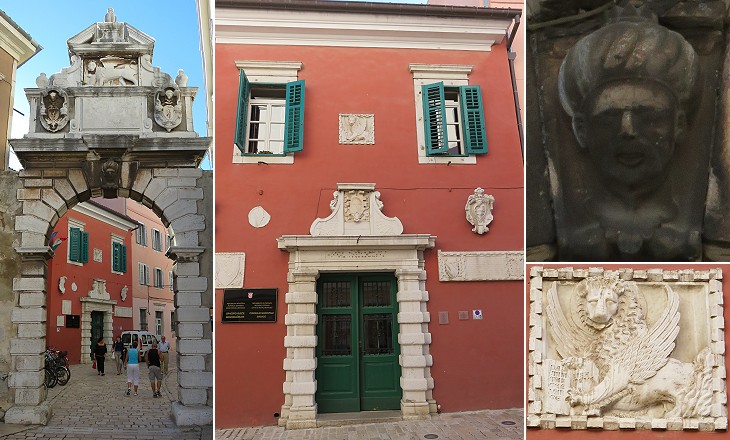 (left) Arco dei Balbi; (centre) Town Hall; (right-above) head of an Ottoman soldier on the gate; (right-below) Winged Lion at the Town Hall. The image used as background for this page shows another detail of the arch: the head of a Venetian soldier

In the XIIIth century Rovigno sought the protection of Venice and it remained a possession of la Serenissima (the Most Serene Republic) until 1797. During the War of Chioggia (1378-1381) it was sacked by the Genoese who took away the relics of St. Euphemia. These were recovered by the Venetians who however were reluctant to return them to Rovigno. They eventually did it in 1401 after a series of petitions from the inhabitants of the small town. Arco dei Balbi was built in 1680 and modified a century later. It celebrated an enlargement of Rovigno. 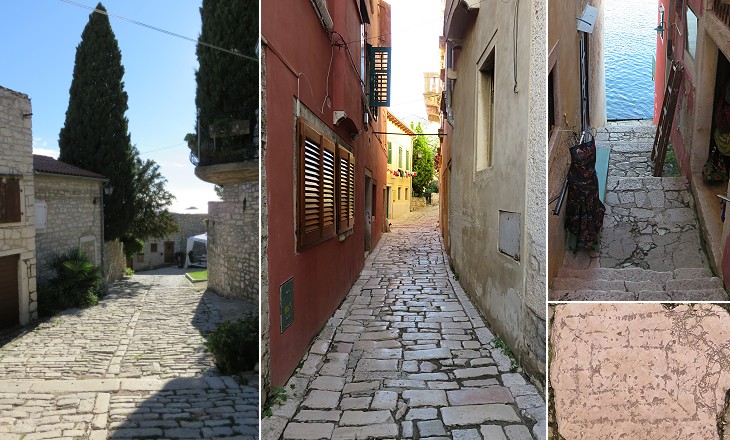 The streets of the oldest part of Rovigno which have not been modified to adapt them to modern requirements resemble those one can see at Pola and Trieste. 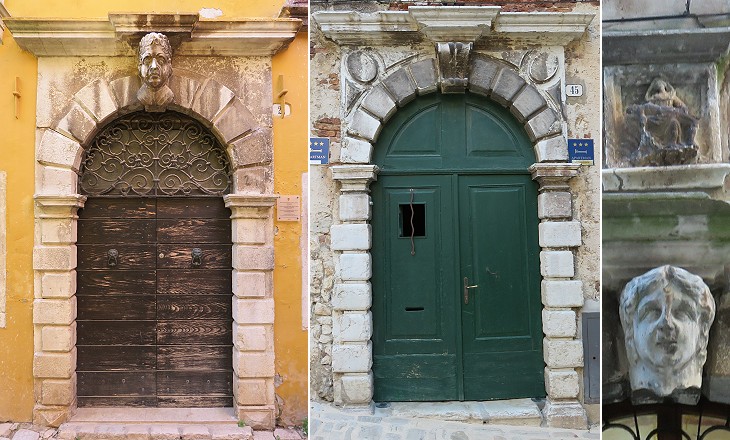 (left) Palazzo Costantini; (centre/right) other old buildings and details of their decoration

The Costantini were one of the wealthiest families of Rovigno and local chronicles cite them as benefactors. In 1764 a member of the family donated a building and sixteen tombs to a brotherhood. However they did not hesitate to pursue their rights: a litigation between them and the Town of Rovigno which concerned the construction of a bakery went on from 1707 to 1793. 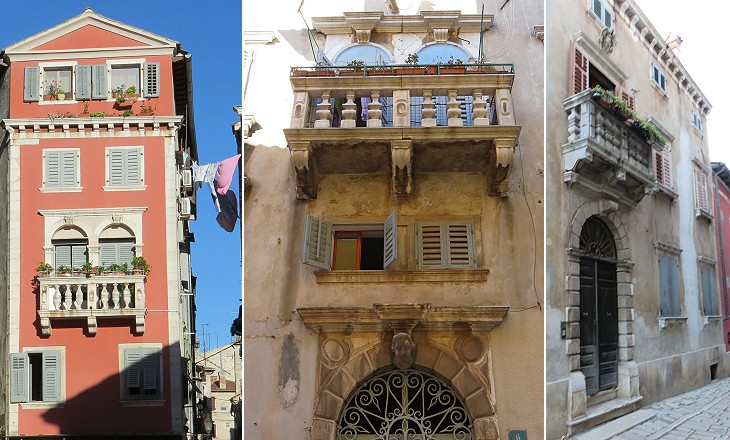 Small balconies are a typical feature of Venetian architecture which can be observed in many buildings of Rovigno. Overall most of the town seems to have been built in the XVIIIth century. Two Provveditori alle Strade, magistrates in charge of controlling the development of the town and improving its streets, were appointed in 1717. 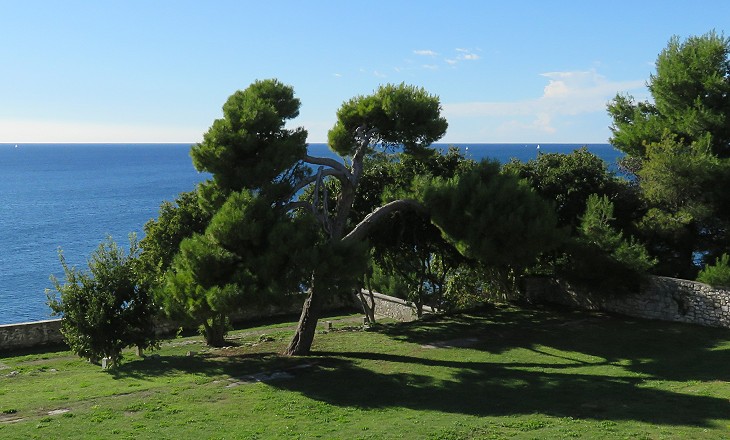