Via Francigena: Montefiascone
(a signpost for modern pilgrims at Acquapendente) 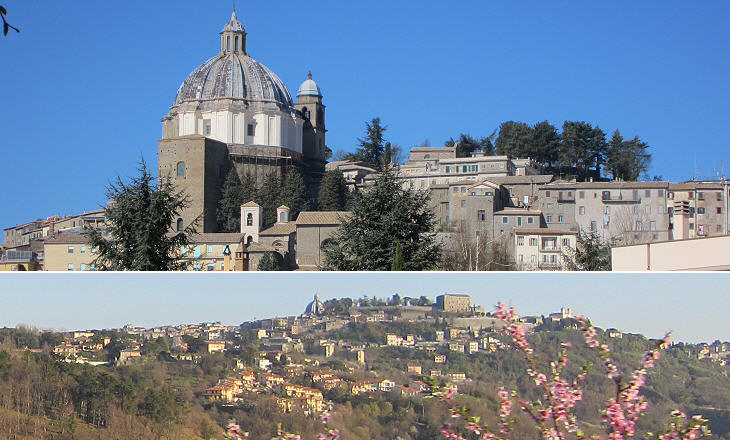 As we continue the road to Montefiascone the town is exceedingly effective from a distance, cresting a hill, and crowned by the handsome dome of a cathedral (it is shown in the image used as background for this age). The hill, always celebrated for its wine, probably derives thence its name -fiascone signifying a large flask.
Augustus J. C. Hare - Days near Rome - 1875
Montefiascone is located on the highest point of the ridge surrounding Lake Bolsena, the largest volcanic lake of Europe and from the plateau of Viterbo it is visible away in the distance. Some archaeologists believe that Fanum Voltumnae, the Etruscan shrine where the chiefs of the twelve main towns met every spring to elect their leader, was located somewhere near Montefiascone. The town flourished in the Middle Ages around a fortified rock and in the XIIIth and XIVth centuries it provided a safe haven to some popes, in particular to Pope Martin IV, whose election was opposed by the inhabitants of Viterbo and who never dared to set foot in Rome. 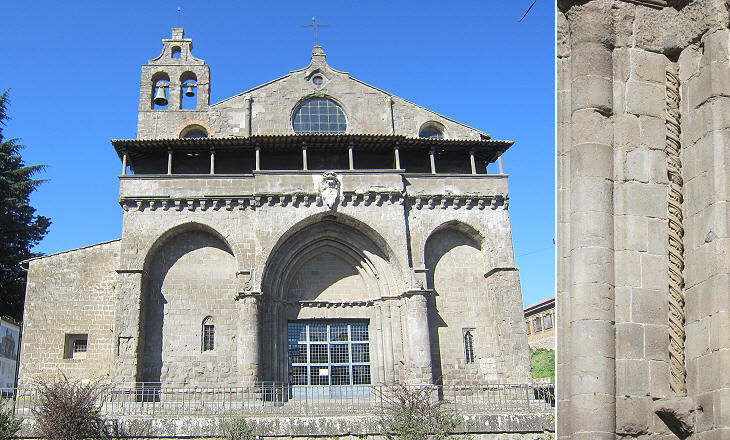 (left) S. Flaviano - Façade of the Lower Church; (right) detail of the portal

Outside the Roman gate of the town (..) is the principal sight of the place, the wonderful old Church of S. Flaviano. (..) It is a most curious building, and highly picturesque outside, with a broad balconied loggia over a triple entrance. Hare
The region of Montefiascone was renowned for Est Est Est, a white wine, the name of which calls for an explanation. S. Flaviano houses the gravestone of Canon Johannes De Fuk (or Fugger) of Augsburg which bears the following inscription dictated by his valet:

In 1111 Canon De Fuk accompanied Holy Roman Emperor Henry V to Rome and he instructed his valet to precede him and to inscribe the word "Est" (there is) on the doors of the inns where the best wine was to be had. On the door of the inn at Montefiascone the "Est" was written three times, and the good canon relished the wine so highly that he never left the town. 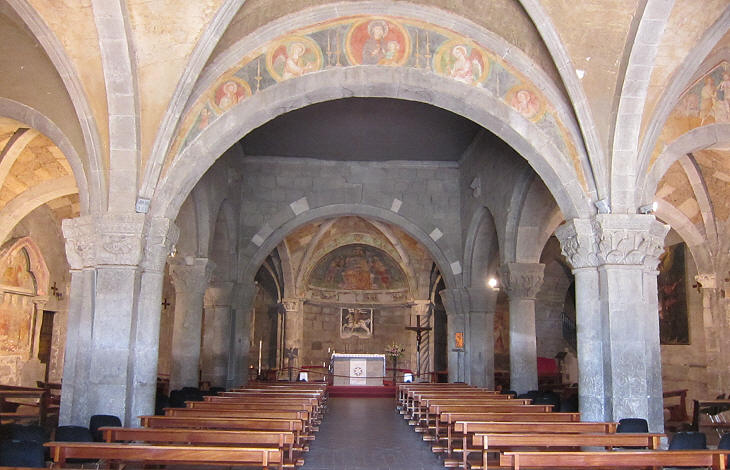 Within, it is quite one of the most remarkable churches in Italy. (..) The pillars are most extraordinary, of enormous size, and with magnificent and very curious capitals sculptured with intricate patterns. Hare
Besides the anecdote, S. Flaviano is a very interesting complex which is made up of two churches, one above the other. The Lower Church was built in the XIIIth century on the site of a previous church, some columns of which were utilized for the Upper Church (which was eventually modified in the XVIIIth century by Cardinal Pompeo Aldovrandi). The Lower Church combines Gothic and Romanesque features and has a very interesting decoration made up of frescoes and elaborate capitals. 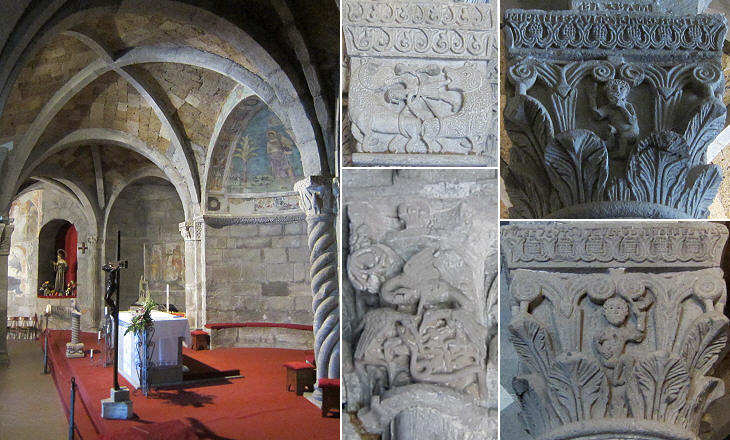 S. Flaviano: (left) apses; (centre) traditional medieval capitals; (right) two puzzling capitals with small inscriptions at their top: "BARBAM MIRANTES AULA V(EST)RAM RESPICITE" (above) and "AULE SV(M) CU(NC)TO P. SCULTU DELUDERE STULTO" (below) (Ye who admire my beard look instead at the temple. I am sculptured in the temple to amuse all fools)

An interesting aspect of the layout of the Lower Church is the position of the two side apses which slightly converge towards the central one, forming a sort of simplified ambulatory, a typical feature of Gothic churches.
The capitals have very varied designs featuring birds, animals, human beings, acanthus leaves and volutes, in a mixture of Late Roman, Byzantine, Carolingian and Lombard styles. 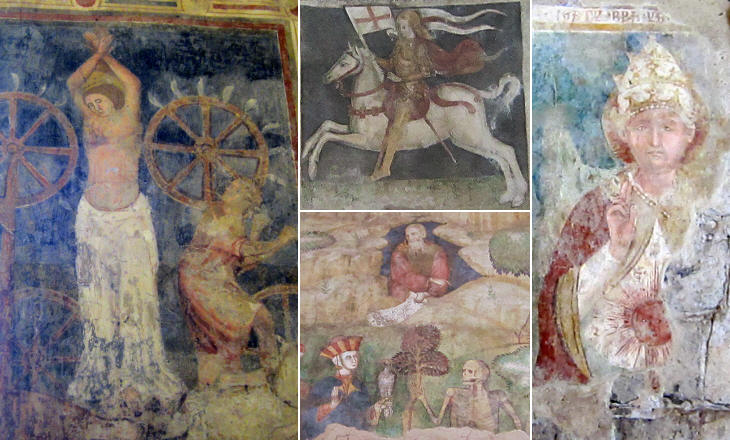 The whole building was once covered with frescoes, which are now only visible where a white-wash coating has been removed. Hare
St. Flavian, Bishop of Constantinople in the Vth century is regarded as a martyr for the Faith, because of his struggle against Monophysitism, but the St. Flavian who is venerated at Montefiascone is known only as the father of St. Bibiana; his Latin name means blonde-haired and the unknown painter who portrayed him as a military saint highlighted his long hair.
From an artistic point of view the region of Montefiascone was very much linked to Siena and the majority of the frescoes of S. Flaviano are attributed to unknown painters from that city. Some of the frescoes depict episodes of the life of early martyrs, which however are set in the XIVth century. St. Catherine's Martyrdom is most likely a representation of the use of spinning wheels in medieval textile factories. 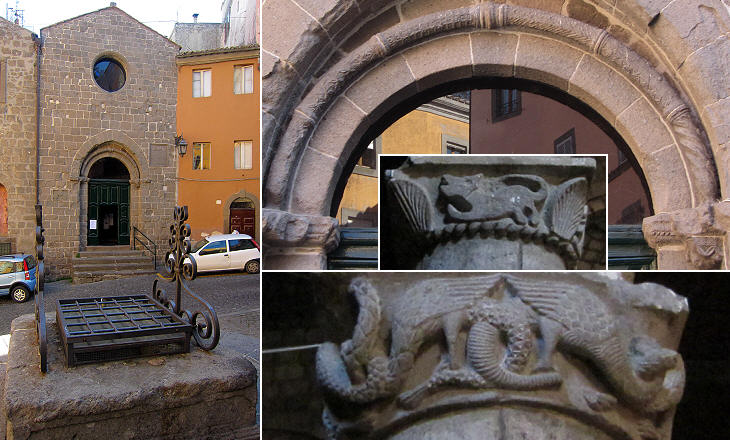 (left) S. Andrea and a medieval well; (right) details of the portal and of the capitals in the interior

S. Andrea is another medieval church of Montefiascone which retains an interesting and unusual decoration, in particular an arch above the entrance which is made up of six differently carved sections. The church had two side naves which were incorporated into the adjoining buildings.
The well opposite the church was dug during the time of Pope Urban IV, as part of an effort to strengthen the fortifications of the town and ensure it could withstand a long siege. 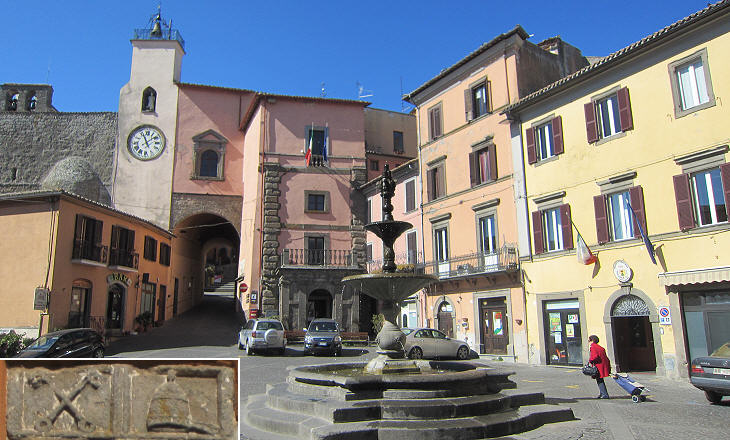 Palazzo Comunale (the pink building) and to its left the apse of S. Andrea; (inset) very old papal symbols on the back of the building

The arch under the tower of Palazzo Comunale was the main gate of medieval Montefiascone (you may wish to see the new imposing gate which was built in the XVIIIth century in a page covering The Gates of the Popes). Palazzo Comunale has lost its medieval appearance with the exception of a small relief showing the papal symbols, probably placed there by Pope Urban IV who fought to restore papal authority in the region. The crown and the keys are shown in separate frames and the crown does not have the three layers which were introduced during the pontificate of Pope Boniface VIII. 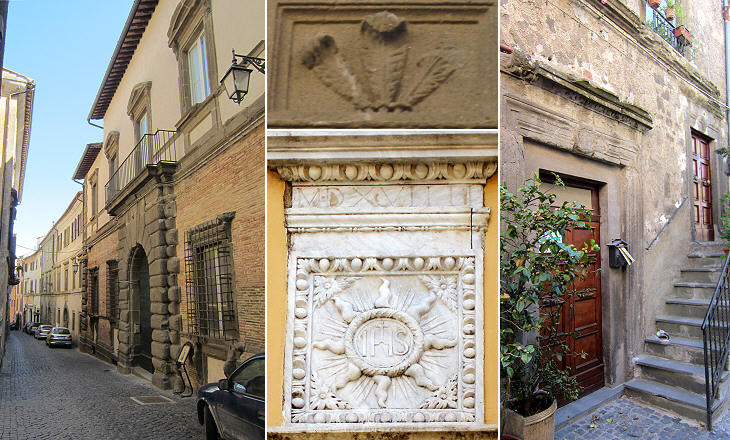 The locals call Palazzo dei Pennoni (large feathers) a Renaissance palace in the street leading to S. Margherita, the cathedral of Montefiascone. The three ostrich feathers do not mean the palace belongs to the Prince of Wales, but possibly that it belonged to Cardinal Giovanni de' Medici (Pope Leo X) who in 1492 was appointed governor of Patrimonium Petri, the region surrounding Viterbo. The coat of arms of the Medici shows six pills, but they had other heraldic symbols and the three feathers was one of them (it can be seen in Palazzo Medici Lante in Rome). Palazzo dei Pennoni is thought to have been designed by Antonio da Sangallo il Giovane, a Florentine architect.
The fleurs-de-lys of the Farnese family, which appear on many palaces and churches around Viterbo cannot be found in Montefiascone. The inhabitants of the town managed not to be included in the nearby Duchy of Castro, a fiefdom of that family. 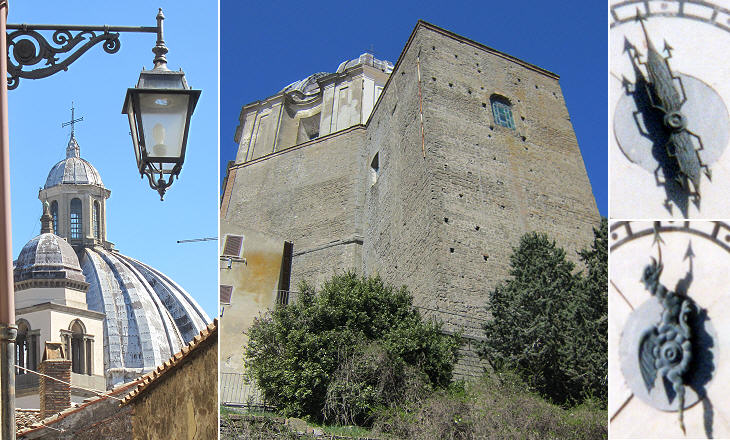 The inhabitants of many Italian towns drained their resources to build the largest possible Duomo, as Italians usually call their cathedrals. In Italy an undertaking which requires a long time to be completed is said to take longer than the Opera del Duomo or (in Rome) Fabbrica di S. Pietro, because the construction of these huge buildings lasted for centuries. The foundations of S. Margherita were laid in 1519 by Michele Sammicheli, an architect best known for his later career as designer of imposing fortifications at Verona and Candia (Iraklion). The gigantic dome was designed by Carlo Fontana in 1674 and the façade and the bell towers were added in 1843. 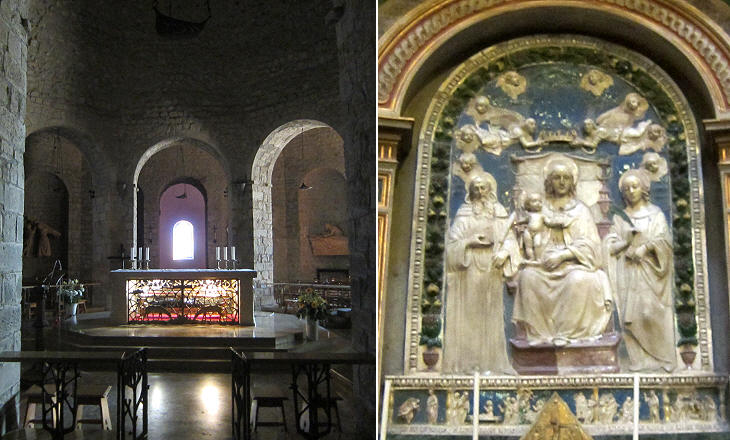 In June 1695 a major earthquake struck Northern Latium causing major damage at Bagnoregio, a town near Montefiascone. S. Margherita however was not greatly affected by the quake thanks to its sound foundations and in particular to the pillars of the crypt which support the whole building.
The Tuscan cultural influence on the region Latium is evident in the frequent use of glazed terracottas. Other examples can be seen at Madonna della Querce and Bolsena. 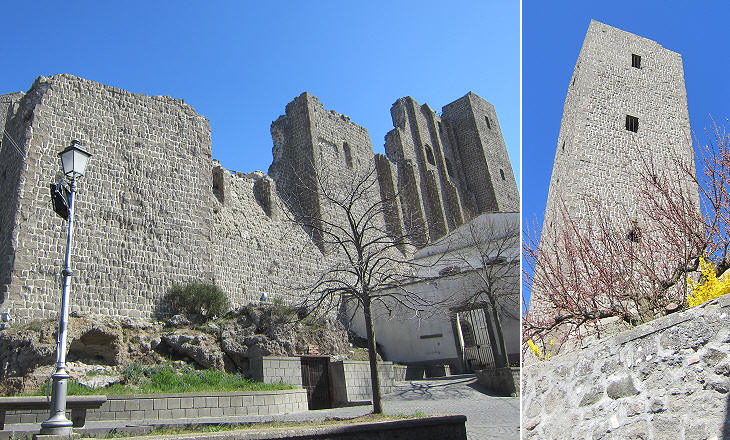 The fortress at the top of Montefiascone acquired great importance when the popes lived at Avignon. Cardinal Gil Alvarez de Albornoz resided there when he was restoring papal authority over the region. Several important cardinals lived in the fortress and Pope Leo X planned to turn it into a countryside palace, but after his death in 1521 the project was abandoned. Gradually the complex fell into abandonment and it became a quarry for the construction of other buildings. 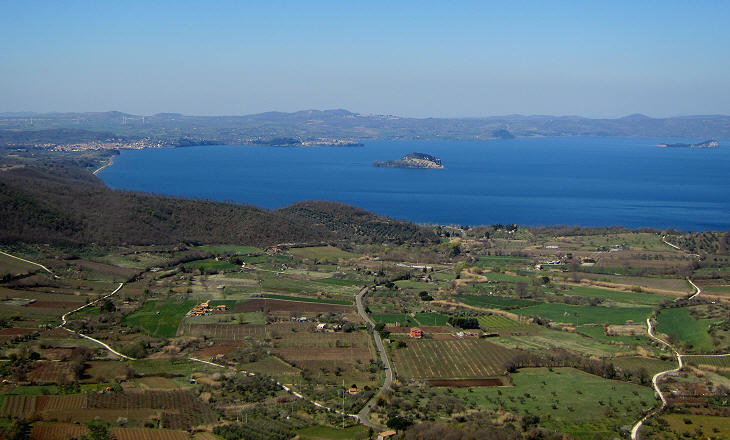 View of Lake Bolsena from Montefiascone showing: Marta (left), Capodimonte and Isola Martana (centre) and Isola Bisentina (right) which were all part of the Duchy of Castro until 1649

From the hill above Montefiascone we look down over the lake of Bolsena. (..) It is more than twenty-six miles round, and encircled by low hills. Two rocky islets break the expanse of water. (..) The lake is full of fish, especially eels: Pope Martin IV. died from eating too many of them. Hare
This section dedicated to Via Francigena ends here but you can follow the pilgrims' journey towards Rome by visiting pages on Viterbo, Capranica, Sutri and Monterosi.

A Pilgrims' Way - Via Francigena - other pages:
Proceno and Acquapendente
Bolsena