Piazza S. Marco
(Vasi at work in the Grand View of Rome) 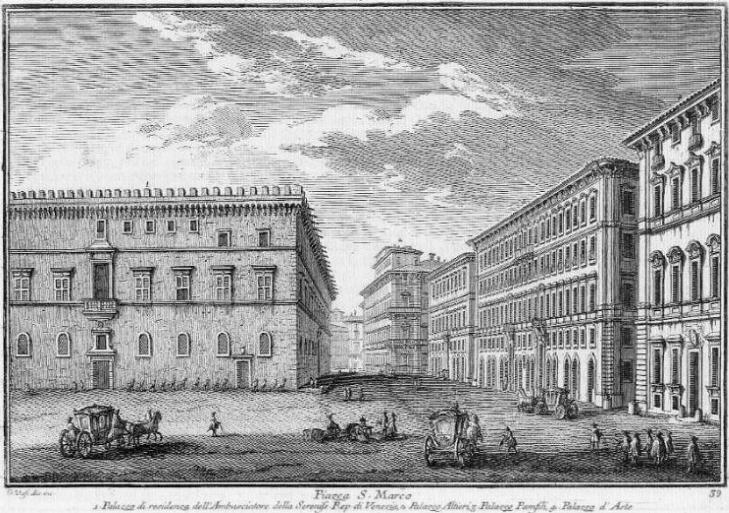 Piazza S. Marco was also called Piazza di Venezia, as St. Mark and Venice were almost synonyms in the past, the former being the patron saint of the latter. Today it is known exclusively as Piazza Venezia. This 1752 etching by Giuseppe Vasi shows the northern part of the square. Its section to the right of Palazzo Venezia was renamed Via del Plebiscito in the 1870s with reference to the October 1870 referendum by which the citizens of Rome agreed to join the Kingdom of Italy. A view of the southern part of the square is shown in Book 4 (Palazzo di S. Marco).
The view is taken from the green dot in the small 1748 map here below. In the description below the plate Vasi made reference to: 1) Palazzo di S. Marco or di Venezia; 2) Palazzo Altieri; 3) Palazzo Pamphilj; 4) Palazzo d'Aste. 2) and 4) are covered in other pages. The small map shows also 5) Palazzo Grazioli. 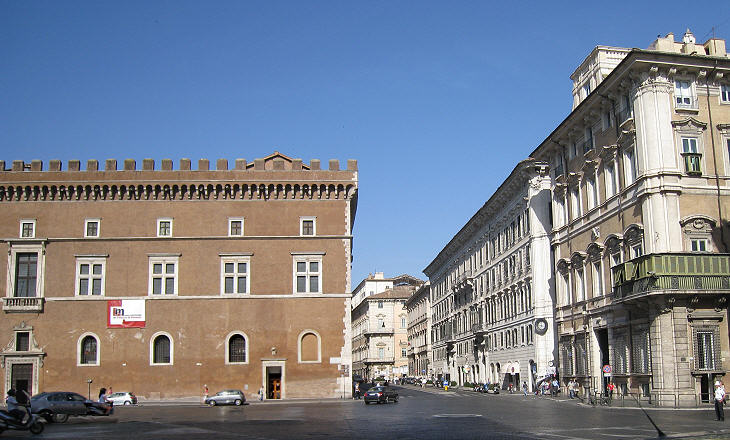 This side of Piazza Venezia looks unchanged, but it is the only part of the square which was not impacted by the construction of Monumento a Vittorio Emanuele II and by the opening of Via dei Fori Imperiali.
The upper storey of Palazzo Venezia was modified by rearranging its windows in a symmetrical way. 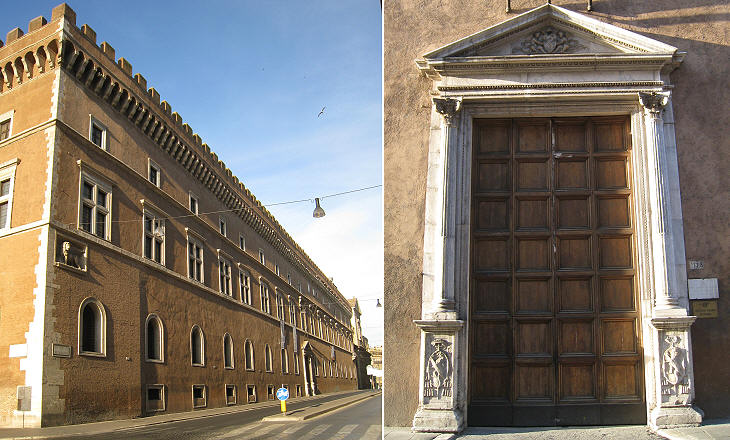 (left) Northern side; (right) entrance on this side

The construction of Palazzo Venezia was started by Cardinal Pietro Barbo, nephew of Pope Eugenius IV after 1451 when he became the titular of Basilica di S. Marco; both the cardinal and his uncle were Venetians.
The palace was enlarged after Cardinal Pietro Barbo became Pope Paul II in 1464; the northern side of the building was completed by Cardinal Marco Barbo, a relative of the Pope, so the windows and the entrance on this side show his coat of arms rather than that of the Pope. He had the titles of Patriarch of Aquileia, an ancient town in northern Italy, and of Cardinal of St. Mark (the basilica) and he was also the patron of the Knights of Rhodes for whom he built a small palace in Rome. 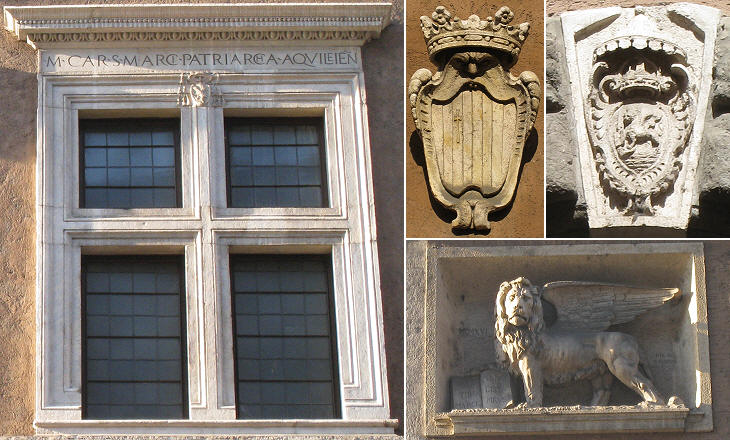 (left) Window built by Cardinal Marco Barbo; (right-above) coats of arms of Ambassador Antonio Grimani (1671) (left) and of the Republic of Venice and the cardinals of St. Mark; (right-below) a modern statue by Urbano Nono portraying St. Mark's Winged Lion (you may wish to see other Winged Lions in the Venetian Fortresses in Greece) 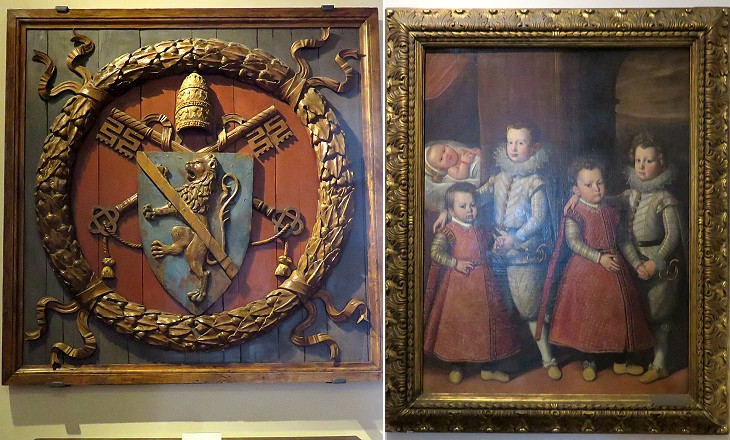 In 1929 the palace became the office of Benito Mussolini, the then Prime Minister. Today it houses a museum of miscellanea and temporary exhibitions. Some of the works of art on display were gifts made to Mussolini for the embellishment of his office (he lived at Villa Torlonia). Other works of art come from buildings/monuments which were demolished e.g. Palazzo Altoviti and an altar at S. Maria Maggiore. 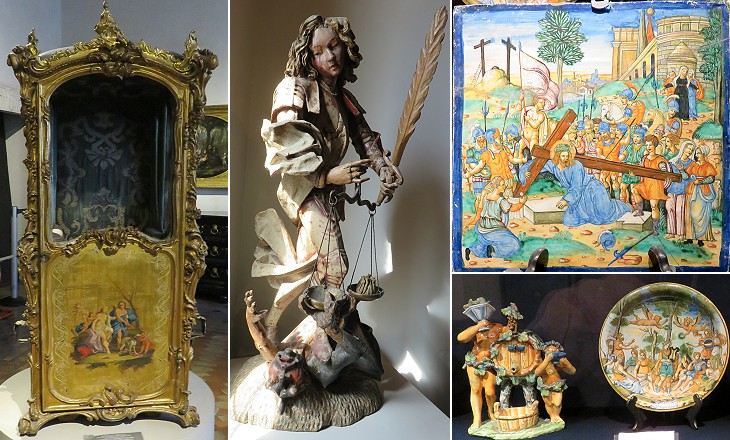 (left) Façade; (right) fountain in one of the two courtyards

The southern side of Palazzo Doria Pamphilj was completed in 1743 by Paolo Amelj and it is one of the last additions to Baroque Rome. The palace has two other (more imposing) façades: one in Via del Corso and another one opposite Collegio Romano. The Doria Pamphilj did not live on this side of the palace which housed flats for rent. This explains why the façade is so crowded with windows and why there are not as many flying doves (the Pamphilj's heraldic symbol) as on the other façades. 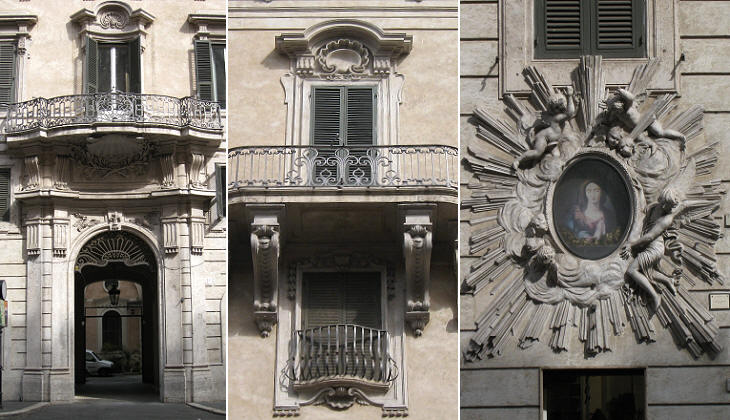 (left) Façade and (inset) the statue on the rear of the palace which is shown in the image used as background for this page; (right) the lone flag

This palace was designed by Camillo Arcucci in 1650 for the Gottifredi family. It was acquired in the XIXth century by the Grazioli who made major modifications to its interior and its rear façade. The building was usually known as Palazzo della Gatta (cat) because of a small statue of a cat on its rear façade. The statue was found in the ruin of a nearby Temple to Serapis and Isis and most likely it represented a monkey.
In 1995 the Grazioli rented part of the palace to Mr. Silvio Berlusconi, a politician who has been Presidente del Consiglio (Prime Minister) of the Italian Republic between 2001 and 2006 and again between 2008 and 2011. Since then newspapers and television stations have carefully avoided using the traditional name of the palace. Mr. Berlusconi preferred to live here, rather than in the modest apartment for the Prime Minister inside Palazzo Chigi. Sometimes political meetings are held in this palace; the Italian flag on the balcony is not an indication that the palace houses an institution of the Italian Republic, because public buildings (by law) display also the flag of the European Union.