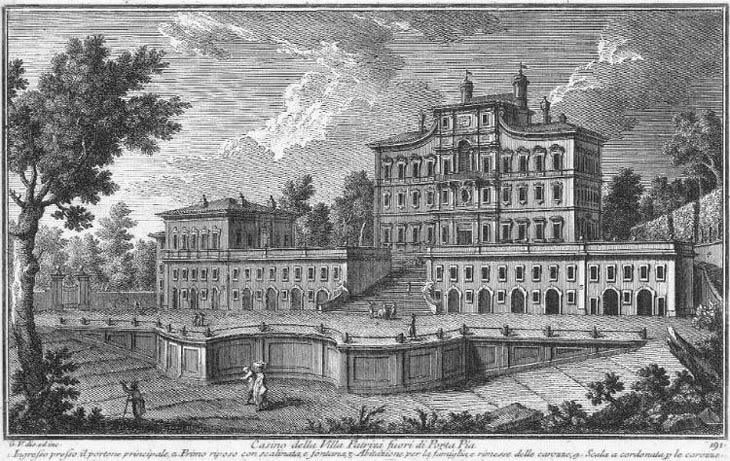 Villa Patrizi was built by Cardinal Giovanni Patrizi and his two brothers in 1717; according to Giuseppe Vasi, the author of this 1761 etching, it was designed by the Patrizi themselves, but art historians believe they were advised by Sebastiano Cipriani, a minor architect. The casino was situated on a small hill along Via Nomentana very near Porta Pia and it enjoyed a commanding view. J. W. Goethe wrote in his diary: I went to Villa Patrizi to see the sunset and enjoy the fresh air (July 24, 1787).
The view is taken from the green dot in the small 1748 map here below. In the description below the plate Vasi made reference to: 1) Main entrance; 2) First Terrace; 3) Houses of the servants; 4) "Cordonata", the carriage access to the villa. The coloured 1924 small map shows: 5) Villa Torlonia; 6) Villa Massimo; 7) Villa Paganini. 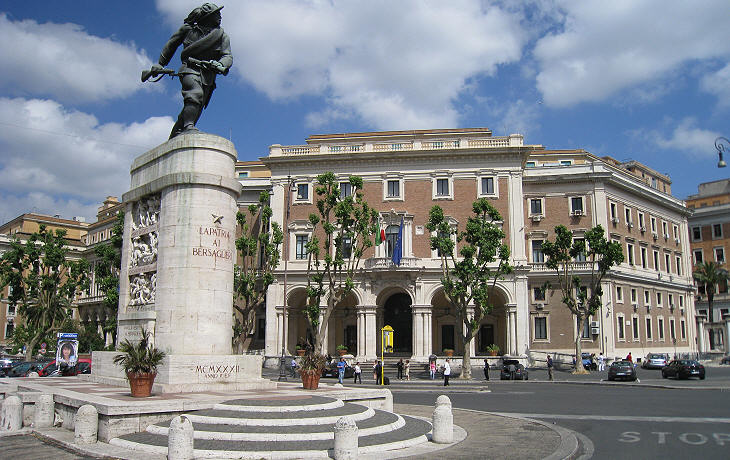 Villa Patrizi, similar to Villa Ludovisi and Villa Peretti was affected by the expansion of the city after the 1870 annexation of Rome to the Kingdom of Italy; in 1884 Marquis Francesco Patrizi started to sell parcels of the land surrounding the main casino, which eventually was demolished in 1911 to make room for the Ministry of Transportation and the headquarters of the Italian Railways.
In 1932 a monument was erected in the square between Porta Pia and the new buildings; it was designed by Paolo Morbiducci and it celebrates the Bersaglieri, the light infantry corps who entered Rome on September 20, 1870 through a breach in the walls near Porta Pia. 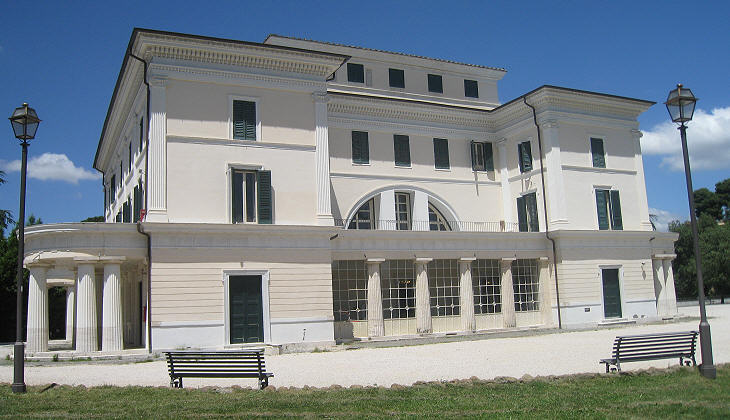 At the beginning of the XIXth century Giovanni Torlonia, son of a French merchant, founded a bank in Rome, which soon grew in importance with the favour of the French administration; with the money earned through banking operations he bought large estates in the Roman countryside; in 1809 he was appointed Marquis of Roma Vecchia, the name given at the time to Villa dei Quintili, because he had bought almost all the farms surrounding that site along Via Appia Antica, including Valle della Caffarella.

A few years earlier Giovanni Torlonia had bought a villa along Via Nomentana from the Colonna; the casino was enlarged in two steps: by Luigi Valadier at the time of the acquisition and in 1842 by Giambattista Caretti who added two small semicircular Doric porticoes and an imposing Ionic loggia. 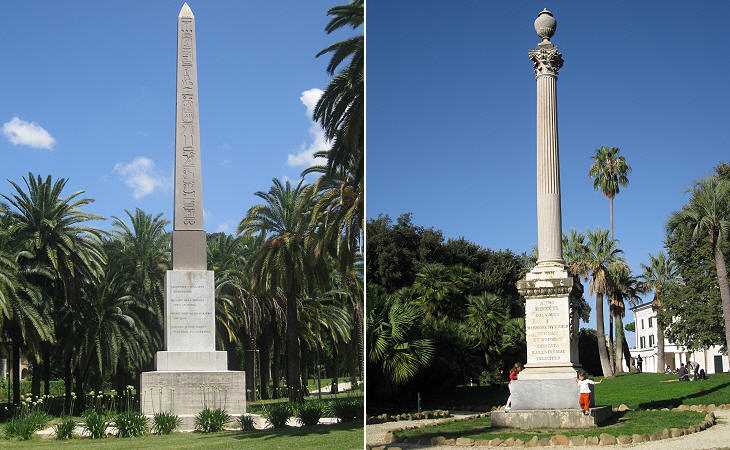 (left) One of the two obelisks near the main casino; (right) honorary column to Giovanni Torlonia

The Torlonia were not affected by the end of the French occupation of Rome; two sons of Giovanni Torlonia married members of the Roman aristocracy (Marino: Anna Sforza Cesarini; Alessandro: Teresa Colonna Doria) and the Torlonia became a very prominent Roman family; Pope Gregory XVI personally attended the celebrations for the erection of two modern obelisks at their villa; the obelisks were cut in a quarry at Baveno, a town on Lake Maggiore; they were unloaded near Ponte Nomentano, very near the villa, at the end of a journey by ship through the Ticino and Po rivers, the Adriatic, Ionian and Tyrrhenian seas and the Tiber and Aniene rivers; a very complex transportation which was compared to those of the Egyptian obelisks brought to Rome by the emperors. The journey was very similar to that of the columns of white granite which were employed for the reconstruction of S. Paolo fuori le Mura. 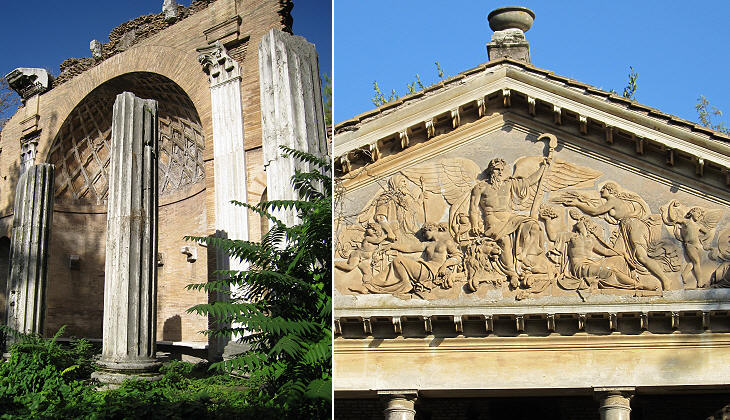 (left) Fake ruins of a Roman basilica (the niche is similar to that of Tempio di Venere e Roma); (right) relief by Vincenzo Gajassi on a fake Temple to Saturn

Beyond Villa Patrizi is the ridiculous Villa Torlonia (shown with an order on Wednesdays from 11 to 4, but not worth seeing), sprinkled with mock ruins.
Augustus J. C. Hare - Walks in Rome - 1875
In line with the fashion of the time, the gardens were embellished with a series of fake ruins, which in some cases resembled actual ruins of Ancient Rome; the majority of these improvements were made by Prince Alessandro Torlonia. 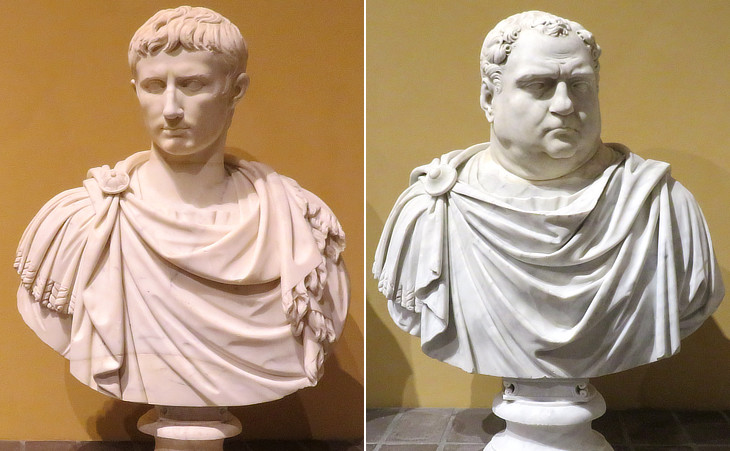 In 1866 Prince Torlonia added Villa Albani to the family properties and with it the remaining part of the large collection of antiquities gathered in the XVIIIth century by Cardinal Alessandro Albani. Other ancient statues were acquired by marriages or bought in the antiquarian market so that the Torlonia had a collection of antiquities larger than those of the other noble families which they put on display in a private museum near Porta Settimiana.
Prince Torlonia smoothly managed the transition from the Papal State to the Kingdom of Italy; in 1875 he was appointed prince by King Victor Emmanuel II. Leopoldo, another member of the Torlonia family was Mayor of Rome in 1887 and later on he became a Member of Parliament. The Torlonia had many palaces in town e.g. Palazzo Giraud Torlonia, Palazzo Nunez Torlonia and Palazzo Bolognetti Torlonia.

One of the minor buildings had the shape of a Swiss chalet, but at the beginning of the XXth century it was given a complex medieval appearance; it was decorated with fine stained glass windows and it now houses a small museum dedicated to this kind of decorative art. 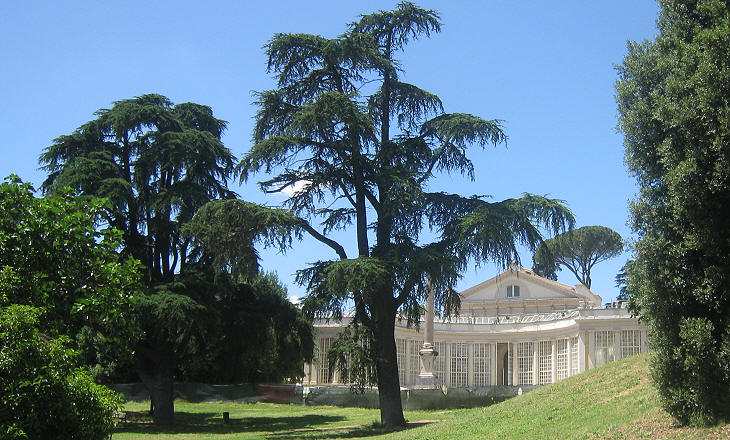 In 1923 the Torlonia leased their villa for a nominal fee to Benito Mussolini, Italian Prime Minister and leader of the Fascist Party; he lived there with his family until the fall of his regime in July 1943; bearing this in mind, in 1944 the Allies established their headquarters in Villa Torlonia; after a long period of abandonment and endless legal disputes, in 1979 the villa was acquired by the City of Rome and it is now open to the public; the image used as background for this page shows a sphinx which decorates one of the minor buildings. 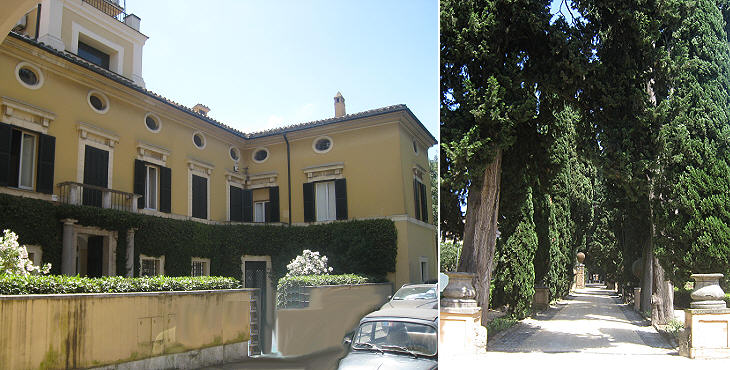 Villa Massimo was located to the north of Villa Torlonia; similar to Villa Patrizi part of it was divided up in the late XIXth century; in 1910 the remaining property was split into two sections. One of them is still known as Villa Massimo, but it was redesigned around a new neo-Renaissance casino which houses the German Academy in Rome. The other section was eventually parcelled out; the original casino of Villa Massimo can still be seen in Via di Villa Ricotti. The Massimo had other villas which also were sold and developed e.g. that near S. Giovanni in Laterano.

(left) Entrance and a former building of Villa Paganini; (right) fountain of the time of Pope Innocent X; (inset) inscription saying how Pope Sixtus V and his successors Pope Gregory XIV and Pope Clement VIII allowed the owners of the villa to receive some water from Acqua Felice

Villa Paganini, which is named after Roberto Paganini, a politician and businessman who bought it in 1888, once belonged to Cardinal Giulio Alberoni, who was Prime Minister of the King of Spain in 1714-1719. He bought and embellished an existing villa which is now almost entirely lost apart from a small section of the garden along Via Nomentana; a minor building houses a private school.