- Crete
(detail of a 1651 engraving by Marco Boschini)

In 1204 Enrico Dandolo, Doge (chief magistrate) of Venice, made an agreement with the leaders of the Fourth Crusade on the division of the treasures they were expecting to plunder in Constantinople. Dandolo (blind and at the age of 80 or even 90) personally led the Venetian fleet's successful attack on the maritime walls of the city. According to the agreement Venice was entitled to 3/8 of the booty. The fall of Constantinople entailed that of the Byzantine Empire, but Venice and the crusaders could not partition among themselves all its territories, because some of them continued to be controlled by local Byzantine rulers.
Venice was mainly interested in acquiring bases for supporting its profitable trade in the Levant, the eastern part of the Mediterranean, and Crete was a sort of bridge towards Laiazzo, Tortosa, Acre and other ports where Venetian merchants were active. The award of Crete to Venice decreed by Baldwin, first Emperor of the Latin Empire, did not have practical effects until the Venetians defeated Enrico Pescatore, a Genoese corsair, who controlled the island.
The Venetians were soon confronted with a rebellion of the Cretans, the first of a long series. In order to tighten their grip on Crete the Republic encouraged Venetian noblemen and peasants to settle on the island by granting them fiefdoms and land there.
In the following two centuries the Genoese were the only external threat to Venetian possession of the island, but the situation changed after the Ottoman conquest of Constantinople in 1453. In 1480 the Ottomans seized Negroponte (Euboea), in 1500 Modon and Corone, two key ports on the route between the Ionian and the Aegean Sea and in 1522 Rhodes.
In 1529 Hayr-ad-din Barbarossa, a corsair, dislodged the Spaniards from Algiers and asked for Ottoman protection. In the following years his corsairs sacked many Mediterranean towns, including Rettimo on Crete, in the name of the Sultan. In 1570 the Ottomans landed on Cyprus, another Venetian possession and in one year they conquered it.
All these events led the Venetian Senate to endorse major plans to protect the main towns of the island with new state-of-the-art fortifications and at the same time they had a positive effect on relations between the Cretans and the Venetians.
In the XVIIth century the population of Crete was divided into four tiers: a) the Venetian noble families b) the Cretan noble families c) the citizens of the three main towns (Candia, La Canea and Rettimo) d) the rest of the population. At that time Crete was known as the Kingdom of Candia. 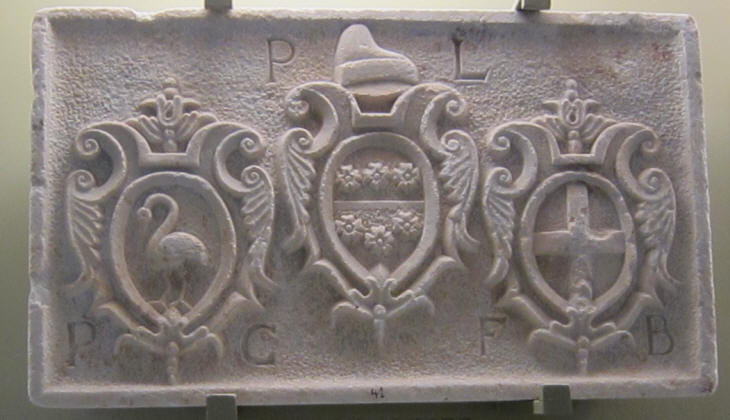 Historical Museum of Iraklion (Candia): coats of arms of local Venetian magistrates at the sides of that of Doge Pietro Loredan (1567-70)

In 1573 Venice signed a peace treaty by which it acknowledged the loss of Cyprus; the Venetians were aware that their possession of Crete had become very precarious because the island was surrounded by Ottoman territories and they were careful not to give the Sultan a pretext for a new war.
In 1644 however the Knights of Malta attacked an Ottoman convoy which was bringing home part of the Sultan's harem returning from a pilgrimage to Mecca. The attack occurred near Rhodes and it was successful; the Maltese ships on their way home with the loot stopped at a bay on the southern coast of Crete to take on board water and subsequently at Cerigo and Cefalonia, two other Venetian islands.
Sultan Ibrahim accused Venice of connivance with the Maltese Knights and in the following year an Ottoman army landed on Crete. The war lasted until 1669; at its end Venice surrendered the whole island with the exception of three fortresses (Grambusa, Souda and Spinalonga) on islets, which protected natural harbours where Venetian ships could anchor during their route eastwards. During a new war (1685-99) the Venetians made an unsuccessful attempt to reconquer Crete. A third war (1715-18) ended with Venice surrendering its fortresses on the islets.

List of the fortresses on Crete:
Grambusa (Granvousa) and Castello (Kasteli/Kissamos)
La Canea (Xania), S. Teodoro and Souda
Candia (Iraklion)
Rettimo (Rethymno) and An Excursion to Moni Arkadi
Spinalonga and Castel Mirabello and An Excursion to Kritsa
Castelfranco (Frangokastelo) and other castles on the southern coast
Sittia and Paleocastro

Introductory page on the Venetian Fortresses
Other Venetian fortresses in Greece:

During the first war Marco Boschini, a Venetian painter and engraver published a book describing the Kingdom of Candia. The icon of this section and the image used as background for this page show a detail of its first plate.