- Castelfranco (Frangokastelo)
(detail of a 1651 engraving by Marco Boschini)

The almost uninterrupted range of high mountains which separates the northern part of Crete from the southern one caused different historical developments. The southern part of the island acquired importance during the Roman Empire when the city of Gortyn was the capital not only of the island, but also of Cyrenaica, the eastern region of today's Libya opposite Crete on the other side of the Mediterranean Sea.

After the conquest of Libya by the Arabs in the VIIth century the importance of southern Crete was greatly reduced. Venetian ships on their way to the Levant called at the ports on the northern coast and this explains the limited number and the small size of the fortresses which were built along the southern one. Castelfranco is situated on a small plain and very near a sandy beach; its location is not very suitable for a fortress because it does not have any natural protection and in addition it does not defend a harbour or a small town. As a matter of fact the Venetians built it in 1371 mainly to show their presence in this part of the island which, as Coronelli noted four centuries later in his map, was inhabited by Sfachioti popoli bellicosi (Sfakians, aggressive people).
The clans into which the Sfakians were divided often clashed amongst themselves or raided peaceful villages outside their region. The presence of a Venetian garrison at Castelfranco had a policing purpose rather than that of resisting an external threat.
The Venetians called the fortress S. Nichita, after a nearby village, but the Sfakians soon dubbed it Frangokastelo, Castle of the Franks, a term they used to indicate all Catholic foreigners. Over time the name was adopted also by the Venetians. 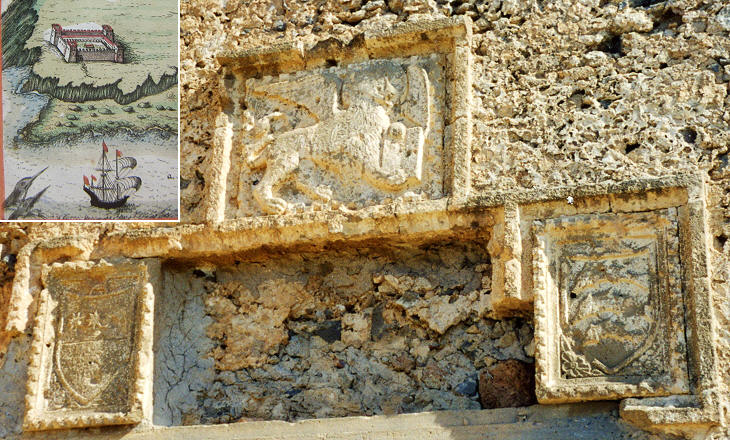 The fortress has a plain rectangular layout with a tower at each corner. The main gate was placed very near a tower higher than the others and it was decorated with St. Mark's Winged Lion, the symbol of the Republic of Venice.
Given its policing purpose Castelfranco was not upgraded to the needs of cannon warfare. The fortress was the site of fierce fighting between Greek rebels and Ottoman troops in the XIXth century; it was severely damaged and then reconstructed; however it is not very different from how it appeared in Venetian engravings. 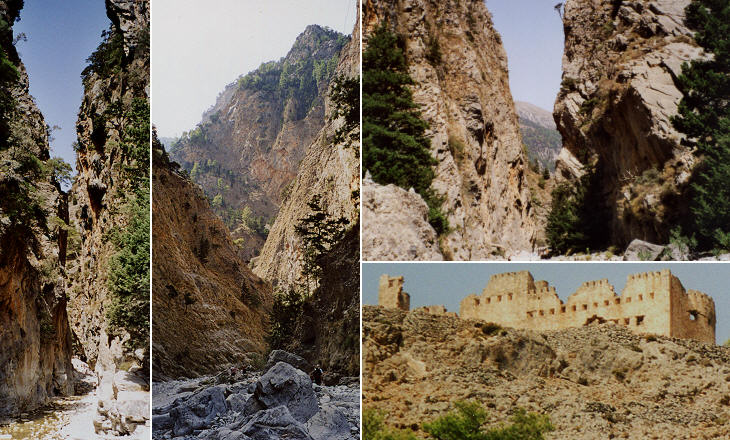 Views of Samaria Gorge and in the lower right corner the ruins of the Ottoman castle at Agia Rumeli, a village near its southern end. Samaria Gorge is an impressive 8 mile long canyon cutting through the mountains of Sfakia and one of the few natural passages between the northern and the southern coasts of Crete

Sfakia was for Crete what Mani was for the Peloponnese i.e. a region where the Venetians and the Ottomans were unable to impose their rule because of its rugged landscape and they were unwilling to do so because they were not interested in the region from an economic and military viewpoint.
After the Ottoman conquest of Crete in 1645-69, many inhabitants of the island converted to Islam, but the Sfakians retained their allegiance to the Orthodox Church. When in 1821 the Greeks of the Peloponnese rose against the Ottomans, so did the Sfakian clans. For some time they were on the attack, but eventually they had to surrender because a large Egyptian expeditionary corps landed on the island to help the Ottomans. 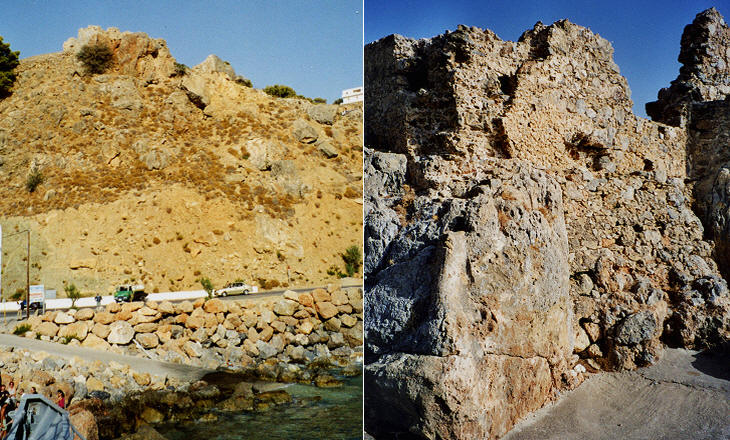 Hora Sfakion (Town of Sfakia): ruins of the fortress

Hora Sfakion was the main centre of the region and it was one of the few ports on the southern coast. The ruins of a Venetian fortress are still visible on the hill overlooking the harbour. Another Venetian fortress known as Castel Sfacchia was built to protect Porto Lutro (Loutro), a large natural harbour a few miles west of Hora Sfakion. Even today there is not a coastal road west of Hora Sfakion and small ferries link the town to Loutro, Agia Rumeli and Paleochora (Castel Selino). 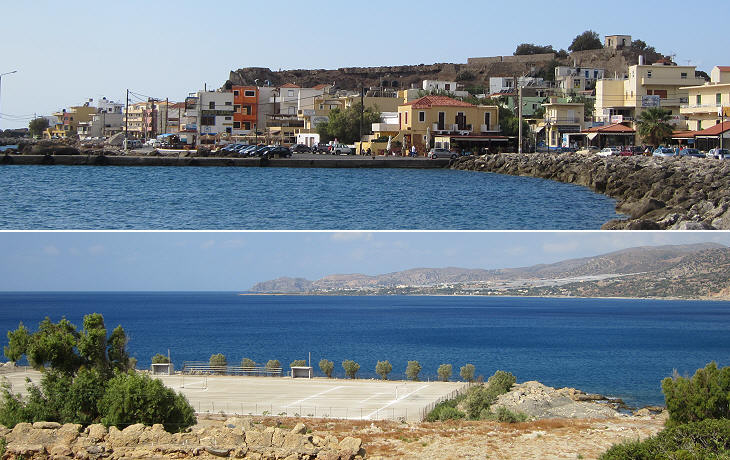 (above) The fortress seen from the east; (below) view from the fortress towards Cape Krios (in Venetian maps Capo S. Giovanni) the south-western tip of Crete

Old Venetian maps call the fortress S. Elleno, probably the name of a church dedicated to St. Helena. Castel Selino (today Paleochora - Old Town) was built on a key position at the western end of the southern coast of Crete. It was first built in 1279, but it was damaged during a rebellion of the Cretans in 1322. It was repaired afterwards, but in 1539 Hayr-ad-Din Barbarossa, an Ottoman corsair, captured and destroyed the castle. After the 1571 loss of Cyprus, the Venetians rebuilt Castel Selino, in the context of a general upgrading of the fortifications of Crete.

(above) Walls of the fortress on the mainland side; (below) ruins of a church and of some houses inside the castle

The image used as background for this page shows Castel Selino in a XVIIth century Dutch engraving. In 1645 the Ottomans landed on Crete and in two years they conquered the whole island, exception made for Candia, the capital, and a few small fortresses including Castel Selino. In 1652 an Ottoman army marched across the mountains and conquered this remote fortress. Robert Pashley who visited the site in 1834 found it utterly destroyed. Today a good, albeit long, road links Paleochora to Xania (La Canea). 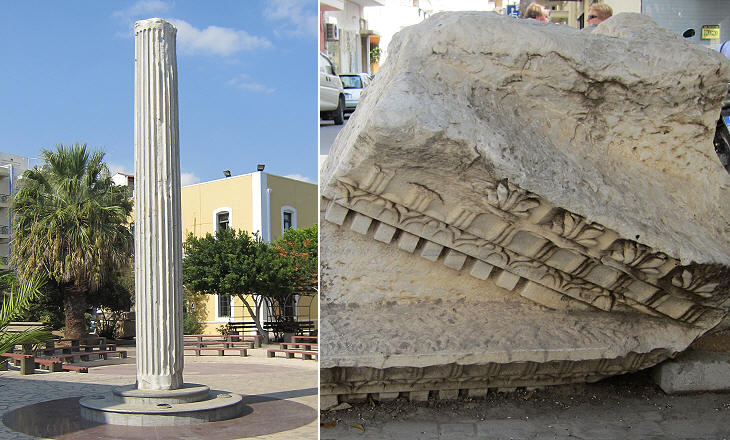 In antiquity Ierapetra (actually Hierapetra - Holy Rock) was an important port in the south-eastern part of Crete because of its position on the maritime route to Egypt. In the early Ist century BC it became a haven for pirates to the point that in 67 BC Pompey destroyed it (you may wish to see a section on other locations which were a pirates' nest). The location of the town however was so good that a few years later Ierapetra was rebuilt and embellished with temples and other buildings. 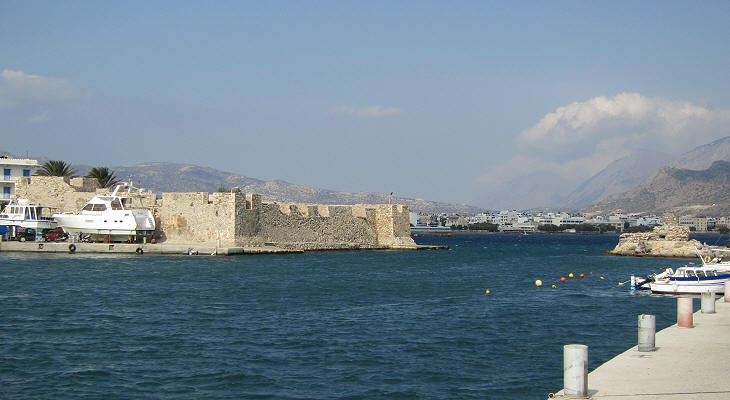 Fortress: side towards the sea

Ierapetra was destroyed by the Arabs, but again it was not entirely abandoned. The small fortress which protects the harbour is similar to that of Frangokastelo and according to some sources it was built in 1212 by Enrico Pescatore, a Genoese corsair who challenged the Venetian possession of the island. In the XVIIth century the Venetians made some changes to the fortress in order to place some cannon on its walls to prevent enemy ships from entering the harbour.

In 1647 the Ottomans seized the fortress without much effort and made some changes to one of its walls which nowadays shows typical Ottoman crenellations. The fortress is locally known as kale, the Turkish word for castle, rather than as kastro, the Greek one. 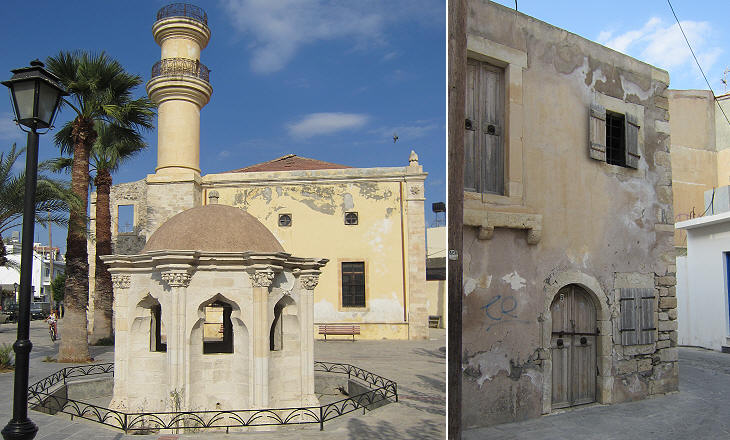 Most of the inhabitants of Ierapetra converted to Islam; in the XXth century the centre of the town was moved eastwards so Kato Mera, the old town, has retained its almost Turkish aspect.
In June 1798 Napoleon Bonaparte, after having conquered Malta, was on his way to Egypt. L'Orient, his flagship, was the most heavily armed ship in any navy at that time and she likely had appropriate accommodation for the commander of the expedition. Yet Napoleon, probably seasick, chose to sleep in a modest house when his fleet called at Ierapetra.


Introductory page on the Venetian fortresses in Greece