- Lepanto (Nafpaktos)
(detail of a 1651 engraving by Marco Boschini)

January the first, (1676) we parted from Patras, and came to Lepanto that Evening, though it was past Noon when we took Water. (..) It is not esteem'd above a dozen Miles distance from Patras to Lepanto; being in sight of each other. From one Castle to the other, is not above a Mile: But then the Gulph widens again on each side, unto Lepanto. Lepanto is now the chief City of this Gulph, and of late hath given Name to it. It was called formerly Naupactus; and by the Greeks now, Epactos; only by the Franks, Lepanto.
A journey into Greece by George Wheler, Esq., in company of Dr. Spon of Lyons - 1682
Lepanto is located a few miles to the east of the Little Dardanelles, the narrows which close the Gulf of Corinth. It was fortified by the Venetians and the Ottomans maintained the walls and the castle. 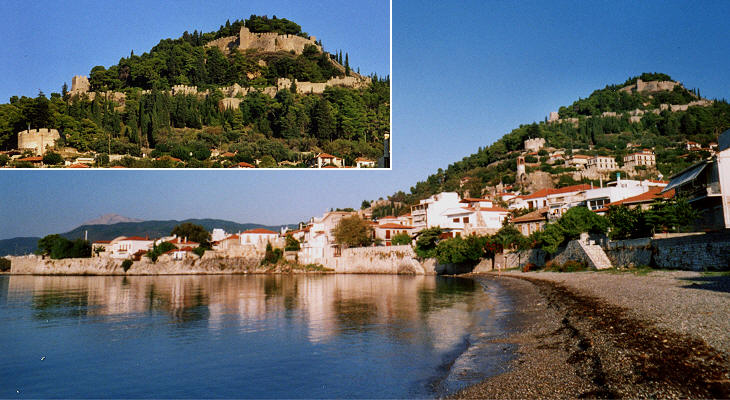 View of the fortifications of Lepanto

It is situate upon a very steep Hill, with a Descent every way from the top; but it is joyned to a Mountain behind it, by two other little Hills; which, since the Invention of Gunpowder, command it: But it was so strong in antient times, that it gave much disquiet to the Romans, being a Refuge for the Rebellious Etolians. It is built from the Sea-shore up to the highest Point of the Hill, which is crowned with a little Castle; to mount to which, one must pass no less than four Ranges of Walls, one above another; which makes it, at a distance, somewhat resemble the Papal Crown. Wheler
The fortifications were made up of a castle on top of a hill from which two walls went down to the sea. The sea-line was protected by maritime walls and three other walls were built at various levels on the hill between the maritime walls and the castle. 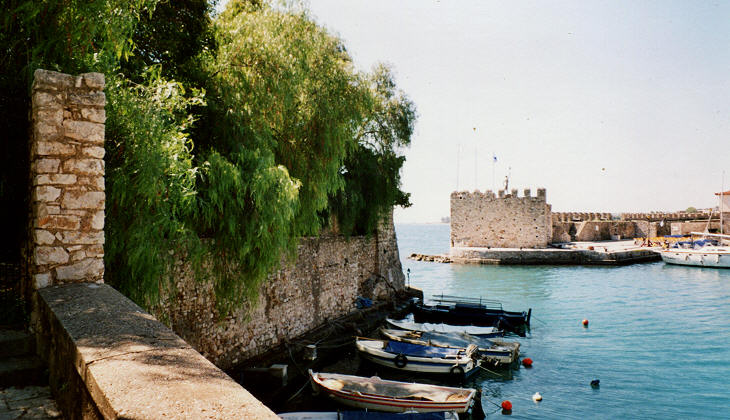 Walls and towers protecting the harbour

Their little Oval Harbour is no small Ornament to it, being placed in the middle of the Southside, and having a little Tower at each side of the Entrance, with some small Brass Guns in them. But the Mouth is so narrow, that it may be secured by a Chain of fifty foot long; and is too shallow for any Vessels, besides Barques, and small Gallies; of which the last cannot come in, but in high Water. For there is a kind of Tide in this Gulph; in the Morning the Water comes in by the Castles, and in the Evening it goes out. (..) This Harbour is well walled about within, and the Work looks antient. Wheler
The harbour was protected by two towers and a number of guns, but it could not house a large fleet. 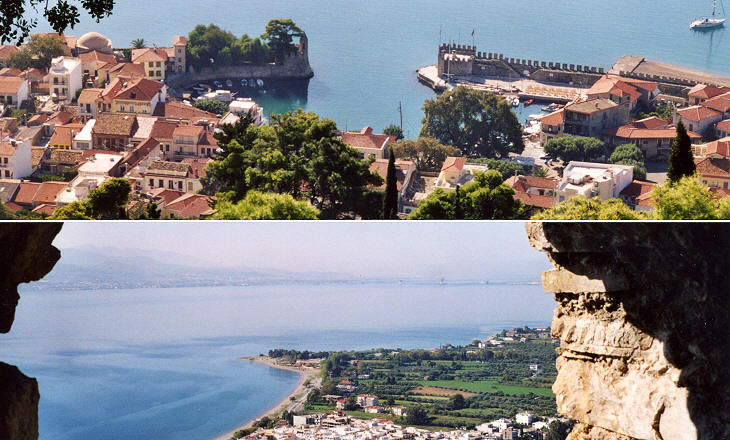 Views from the castle: (above) the harbour; (below) the Little Dardanelles

Before noon we anchored in the road of Patras. Between this place and Lepanto the Christians in 1571 obtained a victory from the Turks in one of the most considerable battles, which ever happened at sea.
Richard Chandler - An account of a tour made at the expense of the Society of dilettanti - 1775
In 1570 the Ottomans landed on Cyprus, a Venetian territory, and in August 1571 they conquered Famagusta, its capital. In the meantime at the request of Pope Pius V a large Christian fleet gathered at Messina in Sicily. Spain, Venice and the other Italian states were part of the alliance. The command was given to Don John of Austria, aged 26, natural son of Emperor Charles V. Venice sent the galleys located in Corfù and Candia to Messina. The commander of the Ottoman fleet took advantage of this decision and from the Aegean Sea he moved around the Peloponnese and entered the Adriatic Sea where he attacked several towns belonging to Venice. He then reached Lepanto to obtain new supplies.

(above) Bay of Samos in Cefalonia; (below) Oxia Island (Isole Curzolari)

The Christian fleet left Messina for the Ionian Islands and on October 7, 1571 it moved from the bay of Samos towards Lepanto. It was in the interest of the Ottomans to avoid the battle or at least to fight in the vicinity of Lepanto to make use of the artillery of their fortresses, but the Ottoman commander underestimated the strength of the Christian fleet and thought that a victory would lead to the conquest of Candia and Corfù. What followed was the largest sea battle between oar fleets from the time of the Roman Empire. The ships were so many and in a limited space that the fight was decided by the Spanish swordsmen. The two fleets met near an islet which today is known as Oxia, but which at the time was called Isole Curzolari (the name included some smaller islets). For this reason the Venetians often called the fight as the battle of the Curzolari Islands. They celebrated it at the entrance of their Arsenale in Venice.

(left) The Battle of Lepanto in a fresco by Antonio Danti at Galleria delle Mappe Geografiche in the corridors of Palazzo del Belvedere in Rome; (right) 1900 map of the area

The victory of Lepanto was celebrated in all western Europe and in particular by Pope Pius V and his successor Pope Gregory XIII who wanted the event to be painted on a wall of the Vatican Palace. The red dot shows the castle of Lepanto. You may wish to see a large fresco depicting a crucial moment of the fight in the ceiling of Sala Grande at Palazzo Colonna in Rome. The 1683 failed attempt by the Ottomans to conquer Vienna was regarded as a second Lepanto. A 1900 map provides a more accurate view of where the battle actually took place. 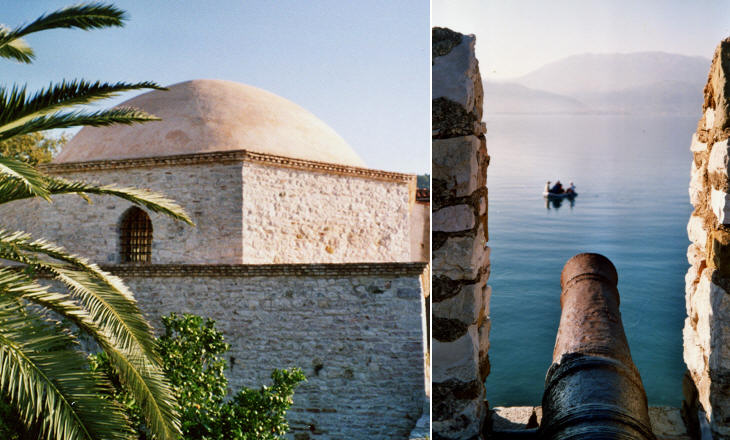 Harbour: a mosque and a gun (also in the image used as background for this page)

Both Venice and Spain have put inscriptions on the maritime walls of Lepanto to celebrate the battle. There is also a statue of Miguel de Cervantes, who fought and was seriously wounded in the battle. The tiny harbour has maintained its ancient appearance and some symbols of the Ottoman rule have been preserved. 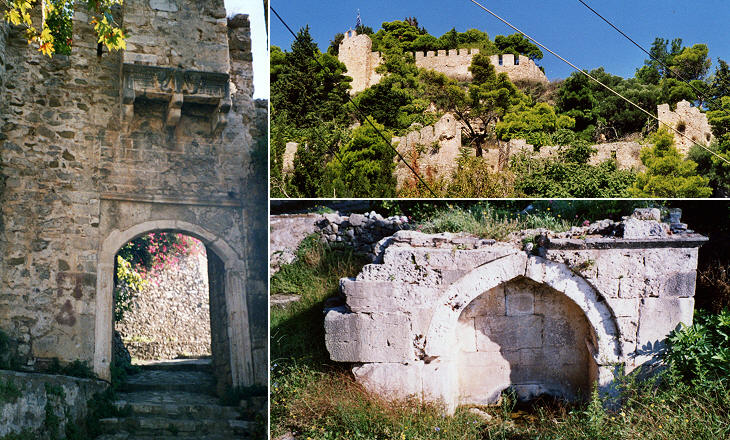 (left) Entrance to the third curtain-walls; (right-above) view of the fourth curtain-walls and of the castle; (right-below) an Ottoman fountain

There are not many Christians here, the greatest part being Turks and Jews; and hath been a very great Harbour for Pirats. This was the Residence of the famous Corsair, Durach-Bey; who made the Ships and Barques of the Christians, in these Parts, tremble; and had the best House in the Town; although bad is the best now. (..) The Trade of this Place consists in Leather, Oyl, Tabaco, Rice, Barley, and Wheat. Furrs also are good cheap here; and therefore, by the Advice of our Host, we lined our Vests with good Fox-skins; which was but needful: For the Winter proved extream cold in those Parts; and as we had from our Lodging the Prospect of those Mountains about the Gulph covered with Snow; so had we our share of the cold Wind, that blew from them, by reason of our bad Lodging. Wheler
The inner walls had only one point of passage located on the side of a tower. The walls are in general well kept but many of the buildings on the upper part of the hill where the historical town was situated have been abandoned and lie in ruins. Some of them show their Ottoman origin. On each side of the City, under the Mountain (..) are fruitful Valleys to the Seaward: That Westward is well planted with Olive-Trees, Vineyards, and Corn: That Eastward is no less well-set, and divided into Gardens of Oranges, Citrons, and Limons without Seeds; being also well water'd with many pretty Streams, that issue out of the Rocky Mountain above it; and in the Summer, 'tis shaded with abundance of large Plane-trees. Wheler
The views from the castle reward the effort made to get there. It is surrounded by a beautiful pine wood. Little is left of the barracks and of the other buildings which once were in it.