- Rettimo (Rethymno)
(detail of a 1651 engraving by Marco Boschini)

Rettimo is situated on a short promontory on the northern coast of Crete halfway between Candia (Iraklion) to the east and La Canea (Xania) to the west. The site was populated in antiquity because the promontory sheltered a small bay where ships could anchor safely, but the town does not retain ancient monuments, although the local archaeological museum displays interesting exhibits found in the Rethymno district, one of the four into which Crete is divided. 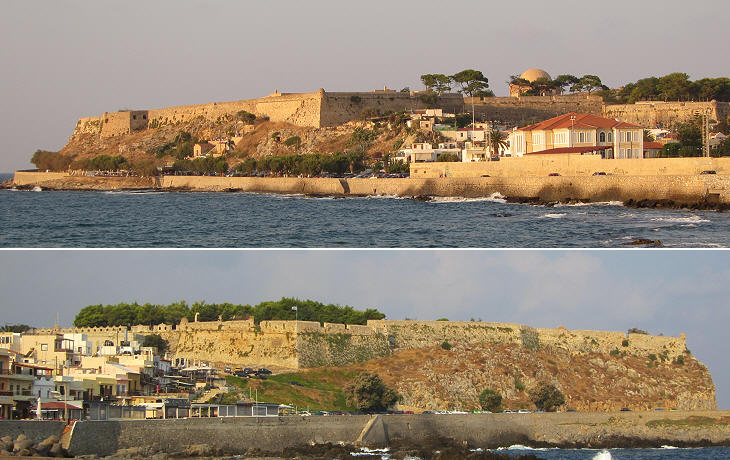 Views of the fortress: (above) western side; (below) eastern side

In 1571 Uluc Ali Reis, an Ottoman corsair of Italian origin, raided and almost entirely destroyed Rettimo; a few months later at the Battle of Lepanto he was the only Ottoman commander who was able to escape defeat; he returned to Constantinople with the flagship of the Maltese Knights; he was appointed Grand Admiral and in this capacity he superintended the reconstruction of the Ottoman fleet (you may wish to see the mosque he built at the entrance to the Bosporus). 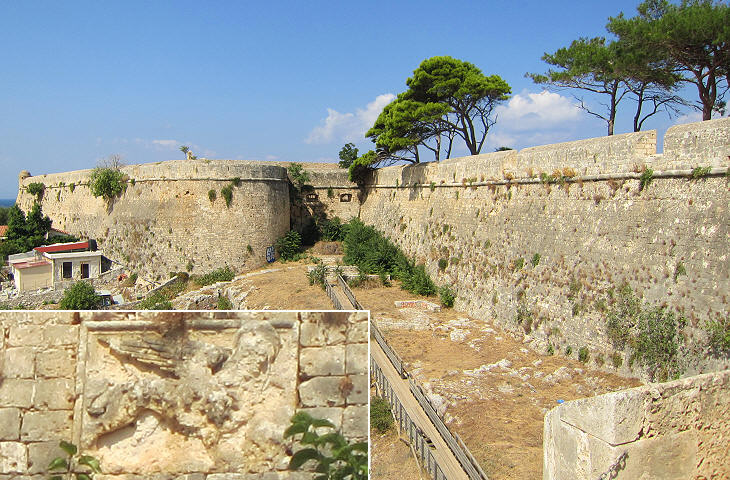 Southern side of the fortress; (inset) a Winged Lion, the symbol of Venice

After Uluc Ali's raid the Venetian Senate and Sforza Pallavicino, the commander of the Venetian Army, decided to build a new large fortress on the promontory and to relocate the population of Rettimo there. This objective was not achieved because the construction of the fortress lasted until 1580 and in the meantime the inhabitants had already rebuilt their homes.
The side of the fortress towards the town was protected by two large projecting bastions, in line with recommended standards of Italian military architecture. A review of the status of the town defences which was conducted some years later by a Venetian expert pointed out as a major weakness the fact that authorities had allowed several houses to be built too close to the fortress. 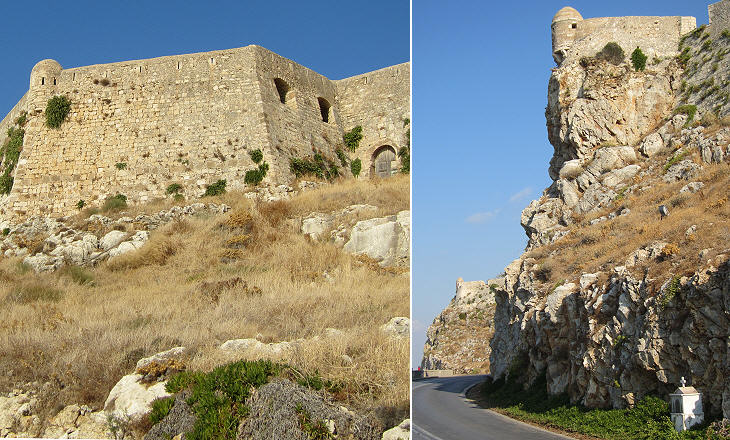 Northern walls built above the rocks

The layout of a state-of-the-art Italian fortress was based on a star-like shape, which could not be implemented fully at Rettimo because of the morphology of the site. The walls built above the rocks are impressive to see, yet they were not so difficult to be assaulted because they had dead corners, i.e. points at their base which could not be reached by the fortress guns. 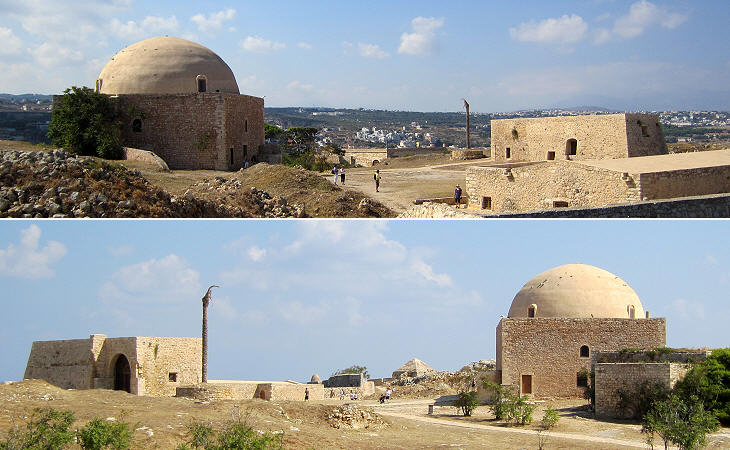 Remaining main buildings inside the fortress

In line with the original plan, the fortress housed the governor's residence, the Catholic cathedral and other public offices; at the same time however the Venetians built fountains and other facilities in the town outside the fortress, so that eventually Rettimo was composed of an upper town and of a lower one (in the background of this page you can see a 1618 Venetian plan of Rettimo). 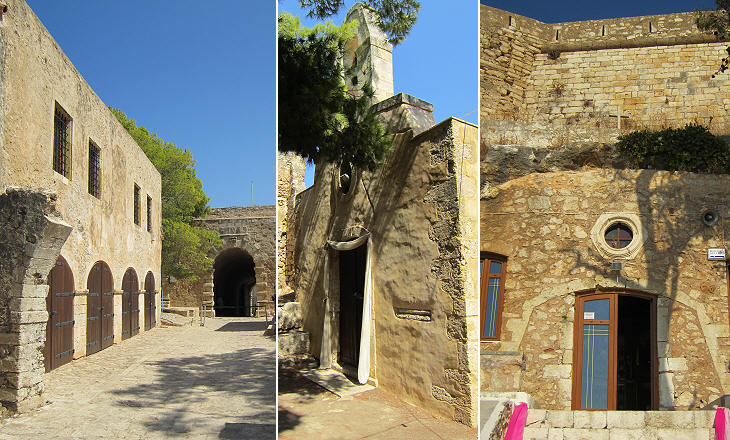 In 1646 a large Ottoman army laid siege to Lower Rettimo, which was protected by walls, but not as imposing as those of Candia or La Canea. After having repelled a first Ottoman assault, the defenders abandoned the lower town and retreated to the fortress, where for twenty days they managed to keep the enemy at bay. Eventually however the Ottomans, helped by the fact that the fortress was not surrounded by a moat, were able to mine a wall and to open a breach. The Venetians prevented them from entering the fortress, but they realized they could not hold their positions for long; they surrendered the fortress, but they were allowed to reach Candia, which was still in Venetian hands. 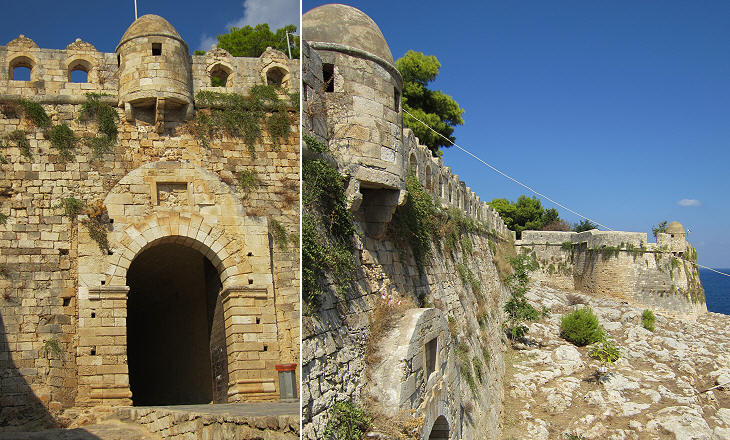 Rettimo became the main port through which the Ottomans supplied their troops during the next and last phase of the war: the siege of Candia which lasted until 1669. Only minor changes were made to the Venetian fortress; the main one being the addition of typical Ottoman merlons above the entrance. Interior of the mosque and mihrab

The Catholic cathedral was dedicated to St. Nicholas; it was turned into a mosque named after Sultan Ibrahim; the dome is typically Ottoman, but the fact that the mihrab, the niche indicating the point nearest to Mecca, is located in an asymmetrical position is evidence that in origin the building was not a mosque. 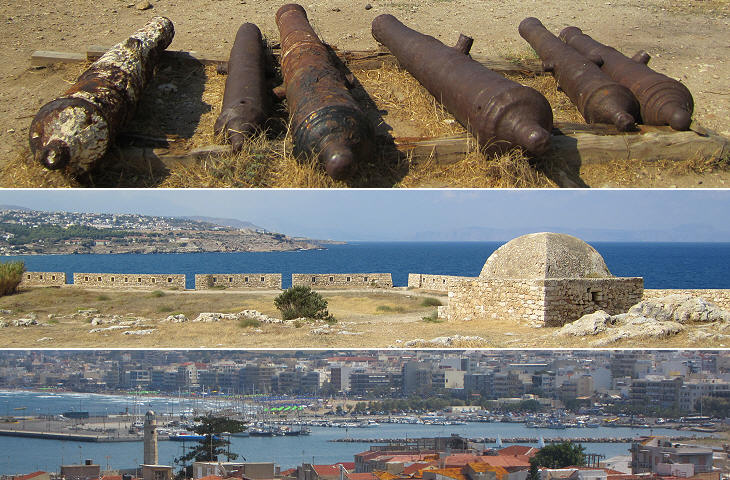 (in descending order) Cannon; view westwards; view eastwards where the seafront is an uninterrupted succession of hotels and other tourist facilities

I found it just like most other Turkish forts: such guns as are not absolutely dismounted being either broken or unserviceable from rust and neglect. I noticed several large bronze Venetian swivels among them. (Robert Pashley - Travels in Crete - 1834) 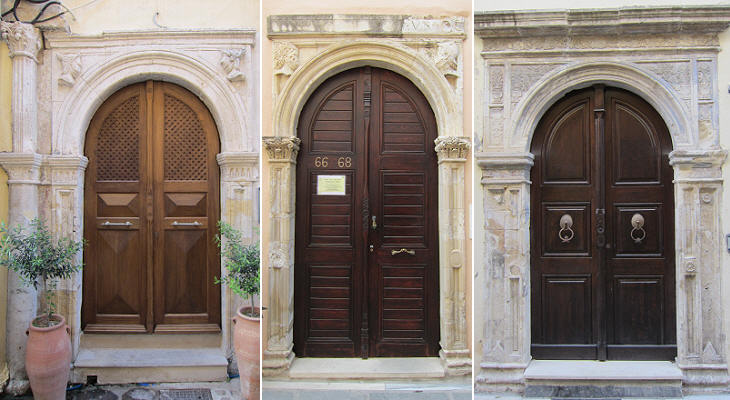 After the 1571 raid by Uluc Ali, Rettimo was rebuilt in an orderly way along the sides of Ruga Magistra, the main street having an east-west direction. The new buildings were consistent in size and appearance; the wealthiest families added a Venetian touch to their homes by having a decorated portal. This practice continued during the Ottoman rule, but without representing human beings or angels. 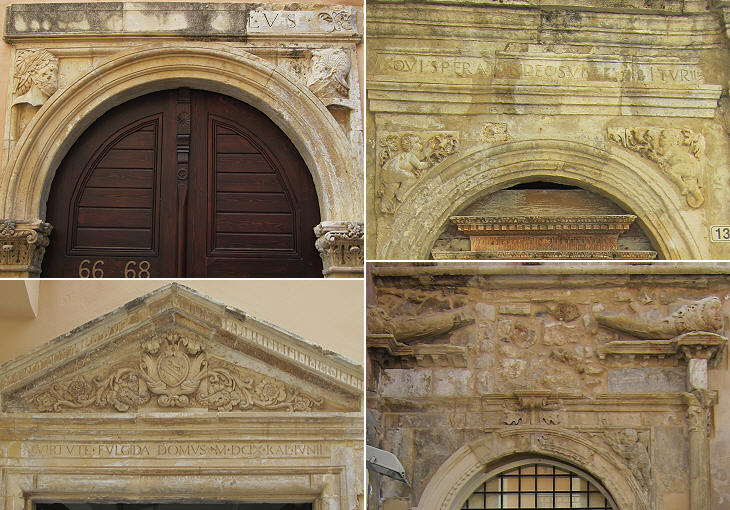 In addition to reliefs and coats of arms, Venetian portals had Latin inscriptions with a moral/religious content such as QUI SPERAT IN DEO SUBLEVABITUR (he who believes in God, will be raised) or VIRTUTE FULGIDA DOMUS (with or from virtue a brilliant/clean house). 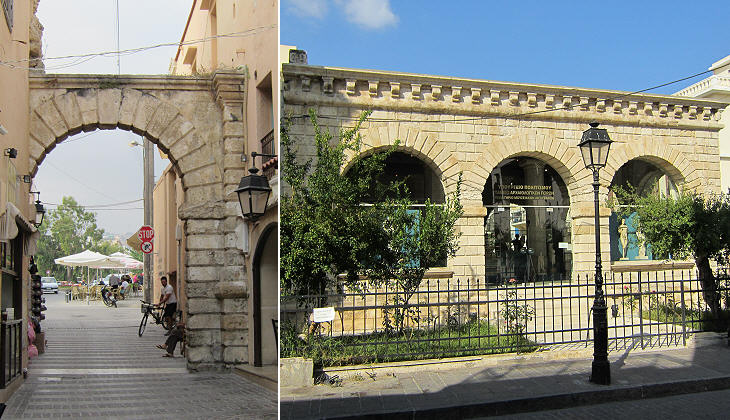 The expansion of modern Rethymno has led to the destruction of the walls which protected the town. They were made up of a straight long wall with a small bastion at each end and a third bastion in a central position next to which Porta Guora, the gate of the town, was located.
Venetian merchants and local noblemen of Rettimo met for business and leisure at a loggia which is similar, albeit smaller, to that of Candia. 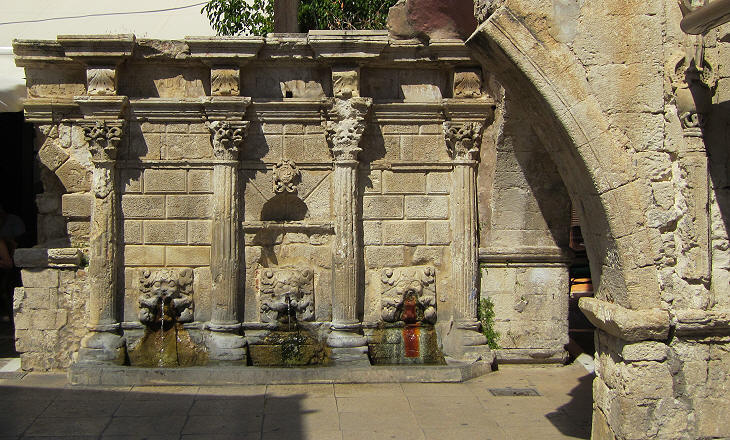 This fountain was built in 1626 by the governor of Rettimo; it was part of a larger building because the existing inscription LIBERALITATIS/FONTES (by the generosity/fountains) was preceded and followed by other words, parts of which can still be detected (ICAE before - perhaps REI PUBLICAE - and IN after). The design of the fountain resembles that of Fontana Bembo at Candia. 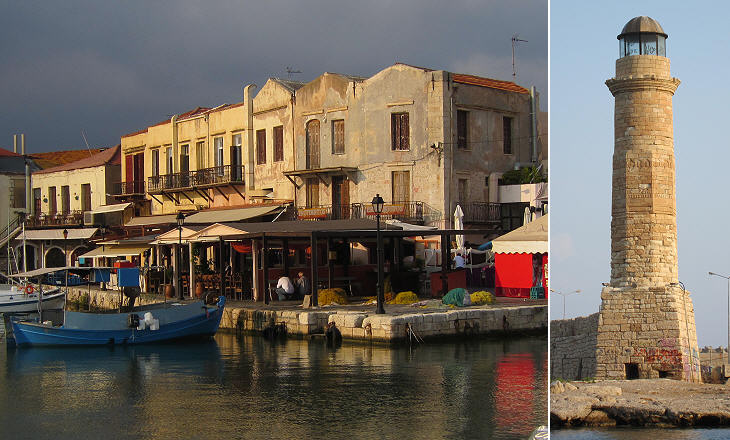 Similar to what occurs at Xania, ferries from the Greek mainland and cruise ships call at a new modern harbour, so the old one has retained its Venetian appearance, notwithstanding the outdoor facilities of restaurants and cafés. 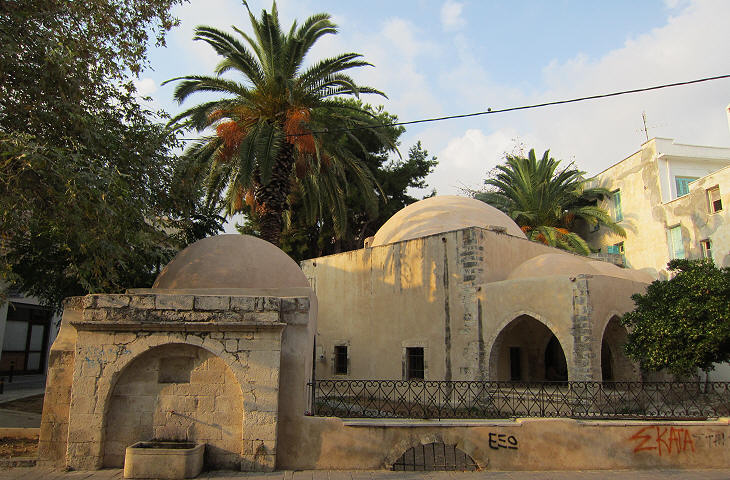 Robert Pashley noted in his 1834 diary: The present population of Rhithymnos is upwards of three thousand souls, of whom only about eighty families are Christians. Here the character of the bazars and streets, which are better than those of Khania, is entirely Turkish.
After having conquered Rettimo, the Ottomans hastened to turn Catholic churches and monasteries into mosques and medrese (religious schools) or tekke (lodges of Islamic brotherhoods). The church of S. Barbara was turned into a mosque dedicated to an Ottoman admiral who was involved in supporting the conquest of the town and who died in the following year. 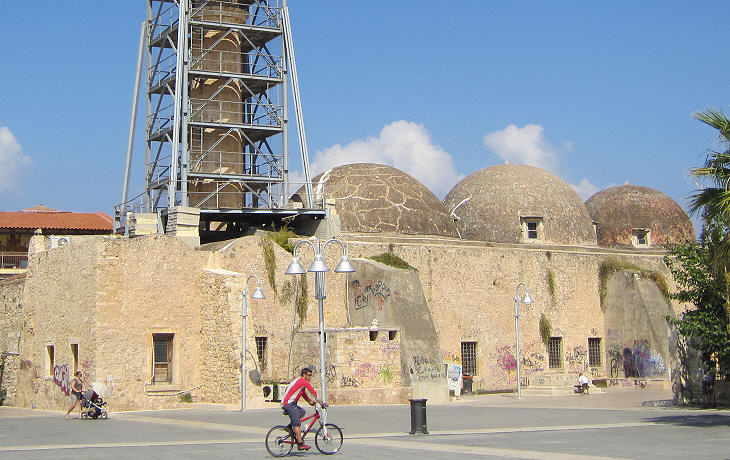 S. Maria, the church of an Augustinian monastery, which was located in a very central position, was turned into a large mosque dedicated to Hussein Aga, the Ottoman commander at the time of the conquest of Rettimo. A very tall minaret was added in 1890. 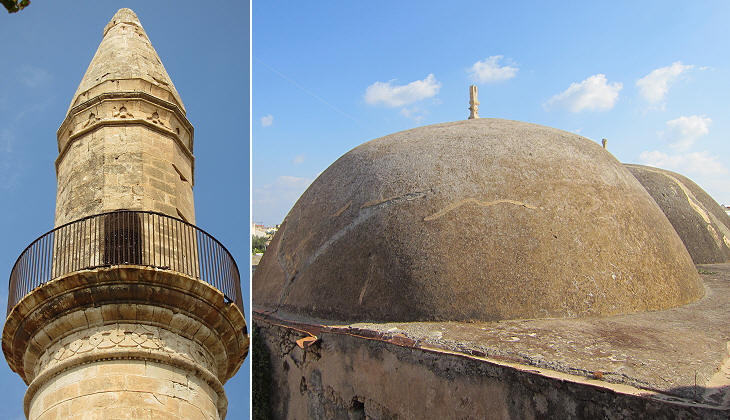 Valide (mother of the ruling sultan) Kosem Djami: (left) detail of the minaret; (right) domes of the prayer hall

Kosem was the mother of Sultan Ibrahim who started the War of Candia. Her name is associated with the construction of Cinili Camii and Buyuk Valide Han at Constantinople.
The mosque named after her at Rettimo is located very near Porta Guora; its minaret is very visible, but the prayer hall is surrounded by other buildings and its twin domes can be seen only by booking at the right hotel. Ottoman-Venetian portal near the former church of St. Francis