This page covers the sea fortress and other Venetian monuments: the walls and a historic outline of the town during the Venetian rule are covered in page one. 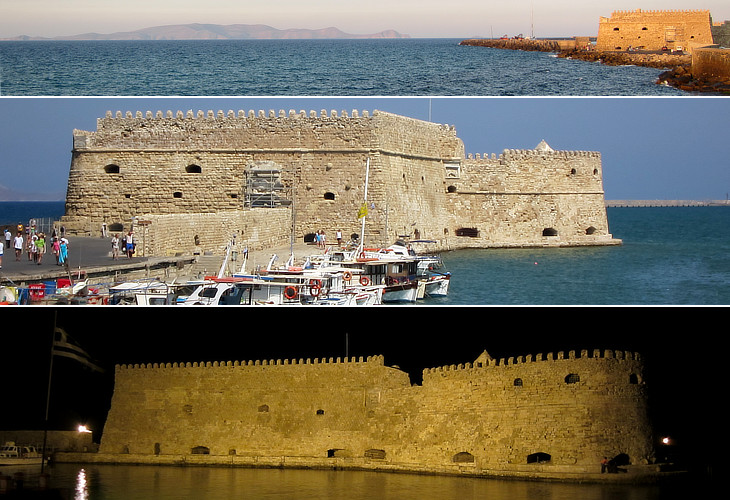 Southern (above) and eastern (below) sides of the sea fortress

In the first half of the XVIth century Ottoman corsairs became the terror of the Christians living on the Mediterranean shores. One of them, Hayreddin Barbarossa (Red Beard), became the admiral of the Ottoman navy and in 1538 he defeated a large Spanish-Venetian fleet at Preveza; this victory made the Ottoman Empire a great maritime power. After the Battle of Preveza Barbarossa raided several locations on Crete without fear of being attacked by enemy warships. In 1540 the Venetians hastened to complete a fortress at the entrance of the harbour of Candia in order to protect the town from other Barbarossa raids. 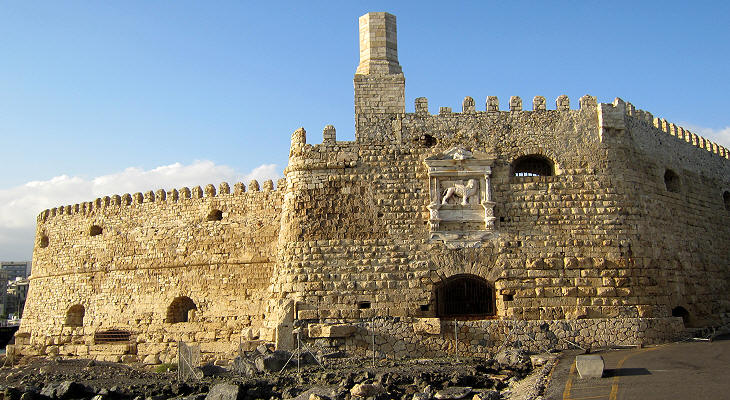 In the second half of the XVIth century the Venetians turned large merchant galleys into galeazze, a new type of warship; they were equipped with many cannon and although slow they were decisive in ensuring the 1571 Christian victory at Lepanto. They were veritable floating fortresses which provided the Venetian fleet with an edge over the Ottoman one.
The sea fortress when compared to the land walls is definitely a minor fortification. During the long siege of Candia in 1648-69 however the defenders did not have to worry very much about Ottoman attacks from the sea, because the Venetian fleet was moored in the harbour and the galeazze complemented the cannon of the sea fortress. 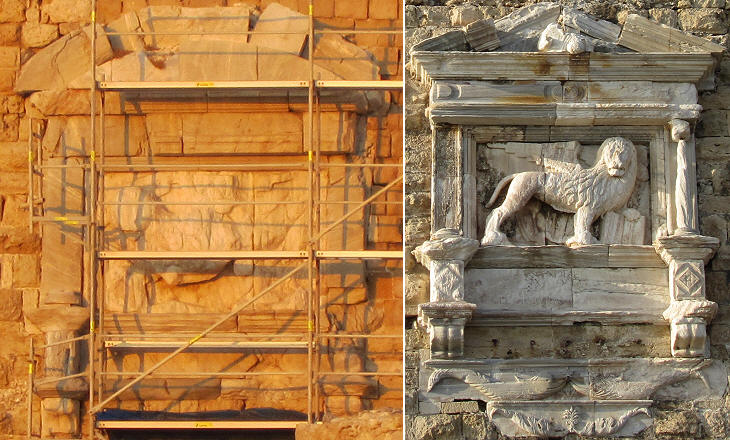 Winged lions of St. Mark, the symbol of the Venetian Republic on the walls of the sea fortress 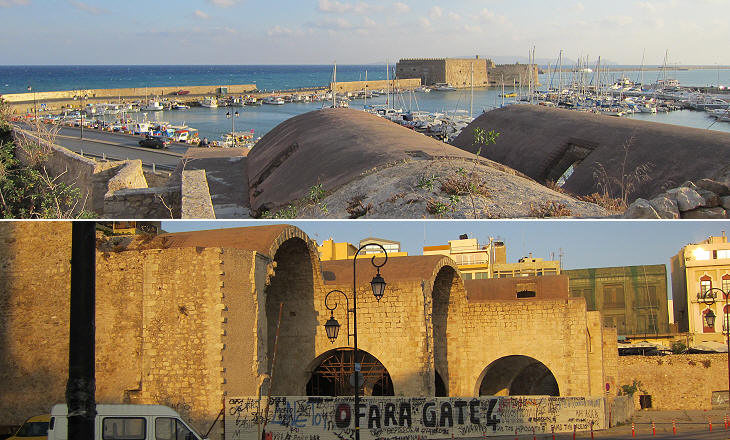 In 1570 when the Ottomans landed on Cyprus and laid siege to Famagusta the Venetians withdrew their warships from that port, a mistake they did not repeat eighty years later at Candia. One of the reasons for this different course of action lay in the availability of a shipyard with 19 large halls inside the harbour. At that time ships required frequent maintenance to be able to effectively sail and without an operating shipyard they would rapidly become useless. 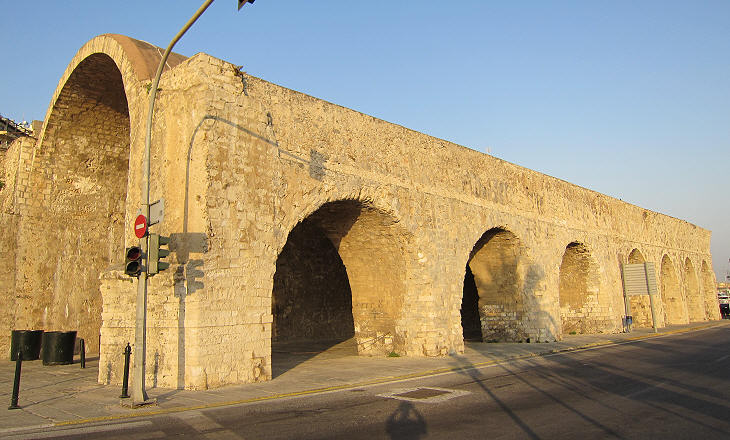 Another large vaulted hall in the eastern part of the harbour

Shipyard facilities were complemented by large warehouses and a very large water cistern. During the Ottoman siege fresh water was collected by Venetian ships at Dia, an island located opposite the town, whereas other crucial supplies, such as timber and salt, came from the islands of the Archipelago, as the Venetians called the Cycladic Islands, some of which, such as Tinos and Myconos, were Venetian possessions. 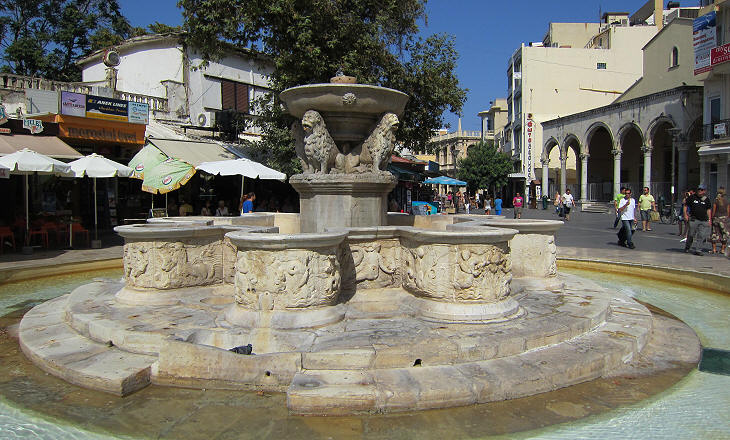 Fontana Morosini and in the background St. Mark's and the Venetian Loggia

Before the Ottomans lay siege to Candia, the inhabitants of the town could rely on the water supplied by an aqueduct which the Venetians completed in 1628. It ended at a large fountain which, similar to other Italian fountains, had at its top a (lost) statue of Neptune. The fountain is called Morosini and it is usually associated with Francesco Morosini, the last Venetian governor of the town, but it was built when he was a boy of nine so the name refers to another member of the family. 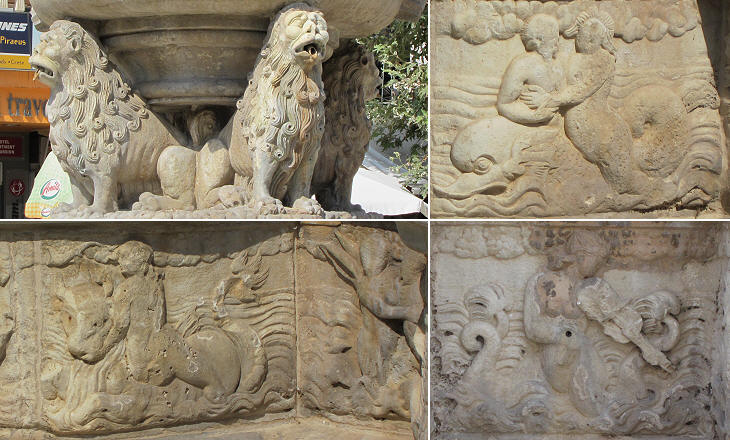 The fountain had a very practical purpose and the six small basins projecting from the main one were aimed at allowing many people to fill their jars at the same time, yet the decoration of the fountain was very elaborate. The four lions supporting the upper basin are of medieval origin, whereas the reliefs which decorate the lower basin reflect Italian XVIIth century tastes; two reliefs seem to portray the abduction of Europa by Zeus, disguised as a bull; this mythical tale was linked to Crete because Zeus seized the young woman under the shade of a tree near Gortyn, on the southern part of the island. 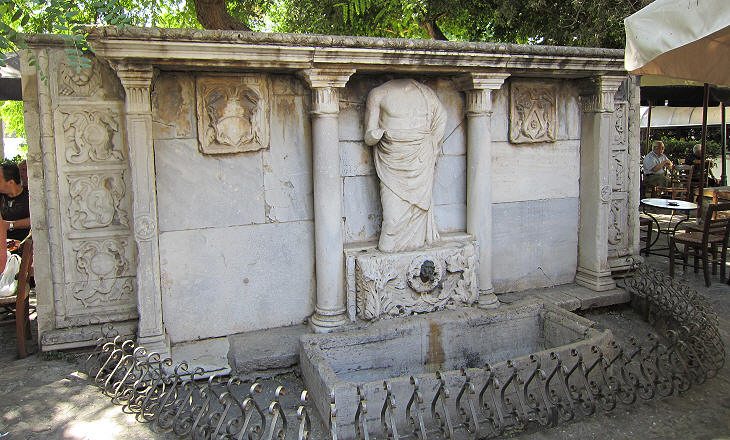 Similar to the Morosini, the Bembo were a Venetian family who gave the Republic many magistrates including a doge, the head of state. Gianmatteo Bembo was the Provveditor General (governor) of Candia and in 1552-54 he built a fountain which was decorated with an ancient statue found at Ierapetra on the south-eastern part of the island. The Venetian governors of the island had also the more pompous title of Duca di Candia, however they were not absolute rulers; the Republic appointed other officers who assisted (and controlled) the governors; this explains why several coats of arms of local Venetian officers were placed on monuments, bastions and gates to celebrate their completion.
The Sagredo were another Venetian noble family (two doge) and their name is associated with a third (reconstructed) fountain on the left side of the governors' residence. 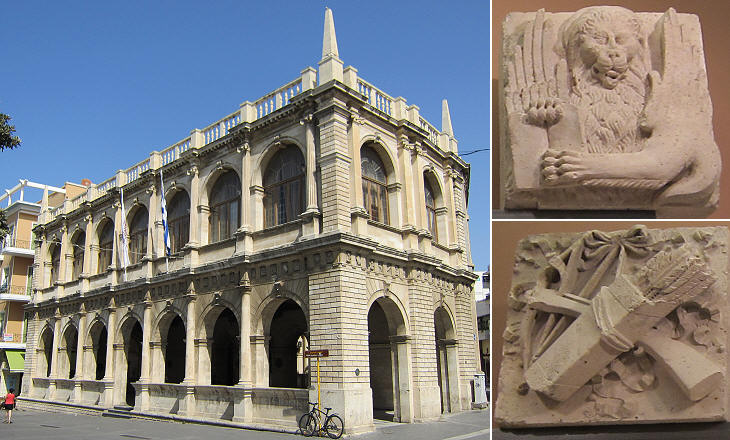 Venetian governors resided in a palace near the Morosini fountain at the end of the main street of Candia which started at the harbour. The building was not just a private residence, but it housed public offices and it was a meeting place for the local noblemen; it was preceded by a large Palladian style loggia which was built at the same time as the fountain. Today the building houses the Town Hall of Iraklion and it has been restored to its pristine state, after changes made by the Ottomans. The original metopes which decorated the cornice of the ground floor have been replaced by copies. 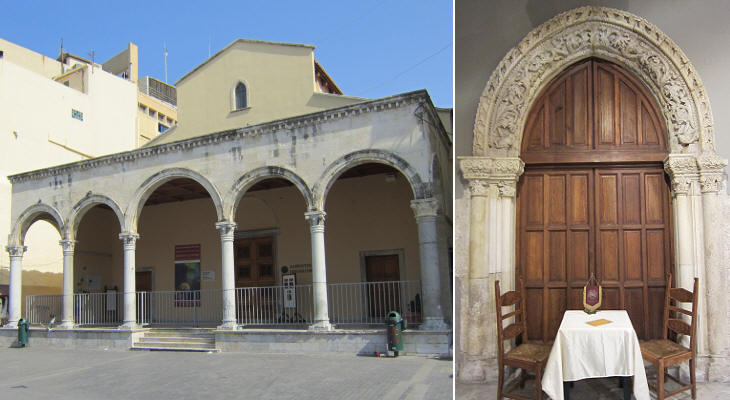 The Catholic Cathedral of Candia was dedicated to St. Mark, the patron saint of Venice. It had a separate tall bell tower similar to that of St. Mark's Square in Venice; the Ottomans turned the church into a mosque and replaced the bell tower with a minaret which was eventually pulled down in the 1920s when the Muslim inhabitants of Candia left the town. The building currently houses the Municipal Art Gallery. 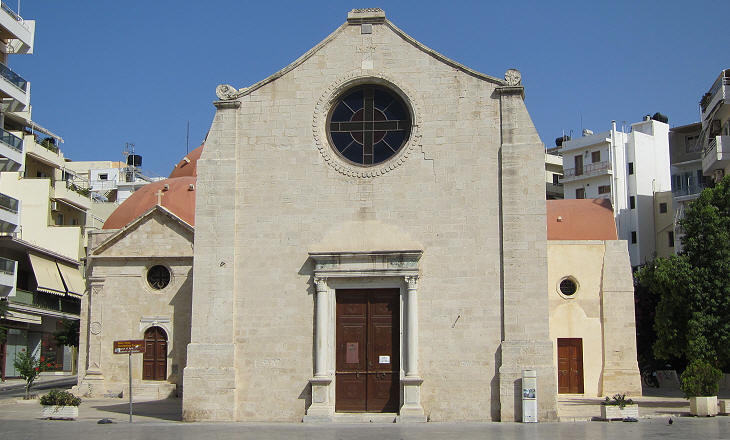 The monastery of St. Catherine's was built in 1555 and it was dedicated to St. Catherine of Alexandria (or of the Wheel). It belonged to monks coming from the famous monastery by the same name which is located on Mount Sinai in Egypt. It was most likely decorated with paintings showing the Egyptian monastery which were seen by El Greco (Doménikos Theotokópoulos), the most famous Cretan painter, who depicted Mount Sinai and the monastery in one of his best known works (The Modena Triptych - it opens in a separate window). 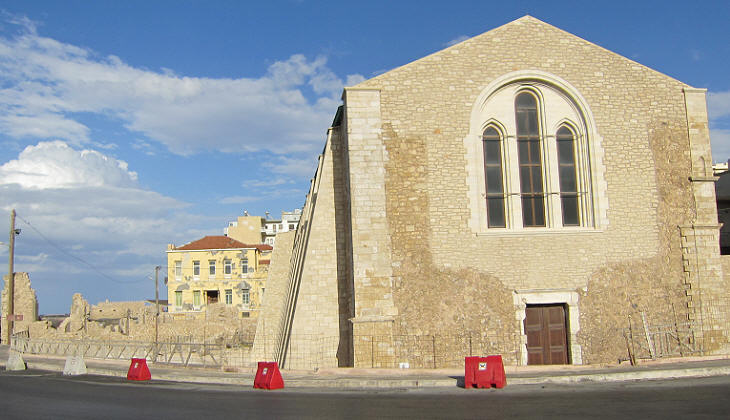 Venice was a cosmopolitan city and the Republic of Venice, when compared to other European countries, was rather tolerant in religious matters. Venetian rulers had to strike a balance between the Republic being a Catholic country and the Orthodox faith of most of its Greek subjects. The great Catholic orders such as Jesuits, Franciscans and Dominicans all established monasteries and nunneries in Candia, but this did not lead to mass conversions to Catholicism. Sebil are small kiosks where passers-by were offered glasses of water; they were very popular at Constantinople where sultans and high rank officers built them as an act of charity. Today the only remaining sebil in Iraklion has been converted into a café, which is a use not very dissimilar from the original one. Other traditional Ottoman fountains can be found by wandering about in the old town. 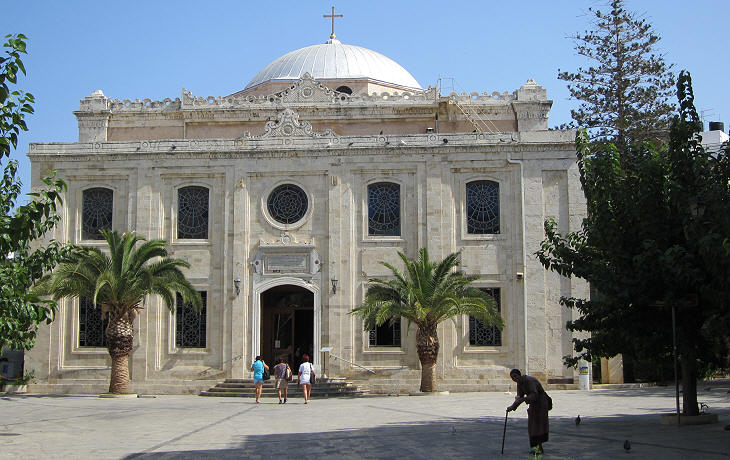 St. Titus was a disciple of St. Paul and he is regarded as the founder of the Cretan church; a large basilica was dedicated to him at Gortyn in the VIth century. The relics of the saint were eventually moved to Candia and they were kept inside another church dedicated to him. When in 1669 the Venetians agreed to surrender the town they brought with them all the relics of Candia including those of St. Titus. The church of St. Titus was turned into a mosque which collapsed in 1856 because of an earthquake. The Ottomans pulled down the ruined building and erected a brand new mosque which eventually was converted into a church in the 1920s.
In 1966 Pope Paul VI returned the skull of the saint to Iraklion (and the head of St. Andrew to Patras).

Return to page one: the walls.