Paris, as the Venetians called Paros, is the second largest island of the Cyclades. In ancient times it was famous for its white marble which was used for many important statues and also for temples (Tempio di Castore e Polluce in Rome). Two large bays on the western (Paroikia) and northern (Naoussa) coasts were important natural harbours.

The Venetian town was built on a mound at the centre of the bay; the expansion of Paroikia and the modern road at the edge of the sea make it difficult to realize the fortified appearance it had in the past. 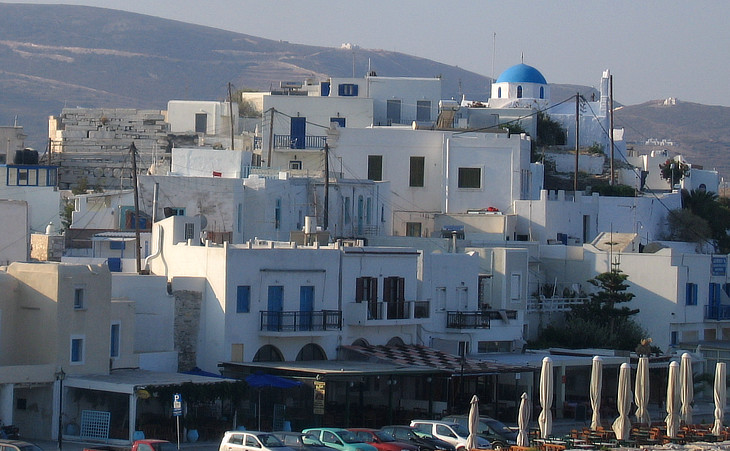 The fortified town and the main tower

The main fortification of Paroikia was a huge tower built with stones of the ancient temples: its purpose was to block an attack coming from land.

The houses were arranged in order to form a barrier with only a few openings giving access to the town.

Paroikia and the other villages of the island have perhaps the finest buildings of the so-called Cycladic architecture which in recent times spread to almost all Greek islands, even where there was a very different kind of traditional architecture.

Main church of the fortified town and Ottoman influence

The Ottoman rule on many Cycladic islands did not actually impact on the everyday life of the inhabitants who were allowed to maintain their religious beliefs; the only remaining evidence of this domination can be found in the adoption of an Ottoman pattern in the decoration of a fountain and in the presence of a cross made up of typical Ottoman ceramics, most likely from Iznik (Nicea). 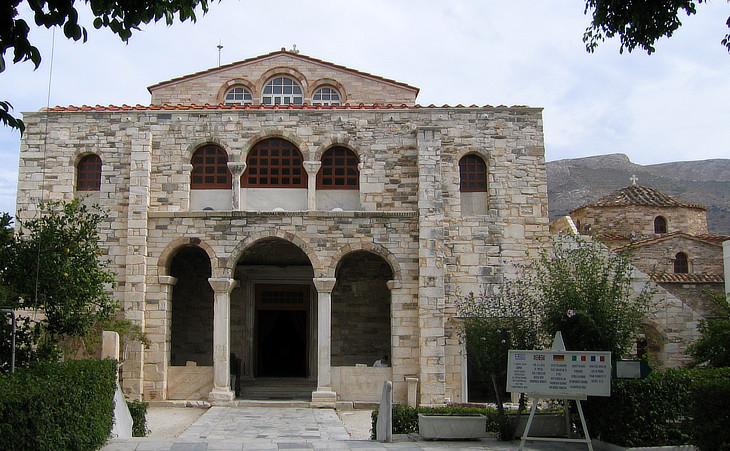 The Venetians did not pull down ancient temples to erect their marble tower, because these buildings had already been pulled down during the VIth century when Emperor Justinian decided to eradicate the allegiance to the pagan gods. In some locations (often because of shrines e.g. Ephesus, Aphrodisia) the old temples were still regarded as a valuable memory of happier times. The many temples which still existed in Paroikia became the quarries providing the construction material for a large complex of churches, chapels and other religious buildings. This explains why it is called "Church of the 100 doors". 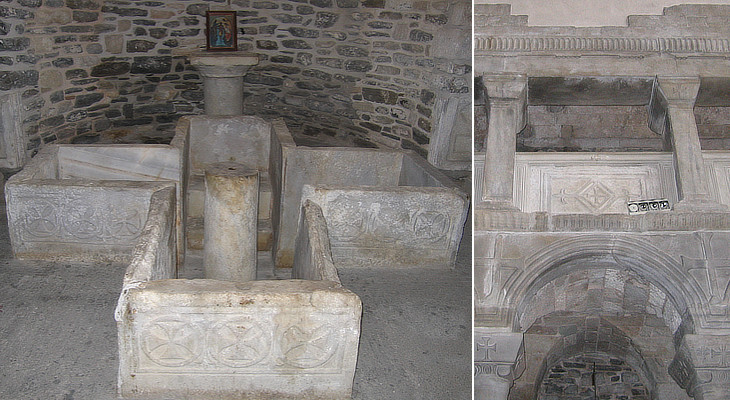 Detail of the matroneum and of the baptistery

Panagia Ekatondapiliani retains some very interesting features of the early Christian buildings including a matroneum (women's gallery) and a very rare basin for full immersion baptism. 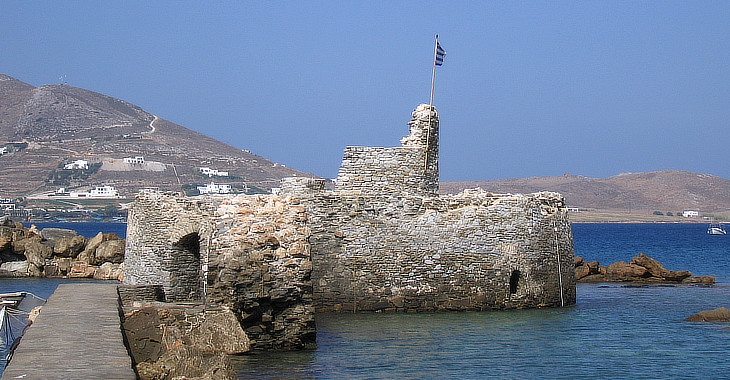 Today Naoussa is a booming tourist resort disfigured by a reckless real estate development: the many beaches of its large bay attract so many foreigners that unlike Paroikia very little is left of the old small town. The Dukes of Nasso built a tower to protect the harbour; this fortification was later on expanded by the Ottomans who added to it a battery of cannon.

The Ottoman addition was built in the second half of the XVIIth century after the War of Candia during which the Venetians gained control of most of the Cyclades: the bay of Naoussa was perfectly located at the centre of the Archipelago, as this group of islands was called, so the Venetian fleet often used it as a base. A 1662 coat of arms of a Venetian commander is now walled on a modern bridge near the harbour.

A third Venetian fortified site was located on a hill on the eastern coast of the island: its remaining few walls were included in a monastery built at a later date.
Paros was important not only for its central location and its natural harbours, but also because its fertile soil allowed the farming of a wide variety of crops.

Agriculture was very important for Paros as its many windmills prove