- Castelrosso (Karistos)
(detail of a 1651 engraving by Marco Boschini)

Near the southern promontory of Euboea toward Attica, was a city named Carystus, and near it a quarry; (..) the columns cut there were much esteemed and celebrated for their beauty. (..) We sailed by the town, which retains its antient name, in the morning. It stands at some distance from the shore; the houses rising on the bare slope of a rocky hill. The inhabitants have a very bad character.
Richard Chandler - An account of a tour made at the expense of the Society of dilettanti - 1775 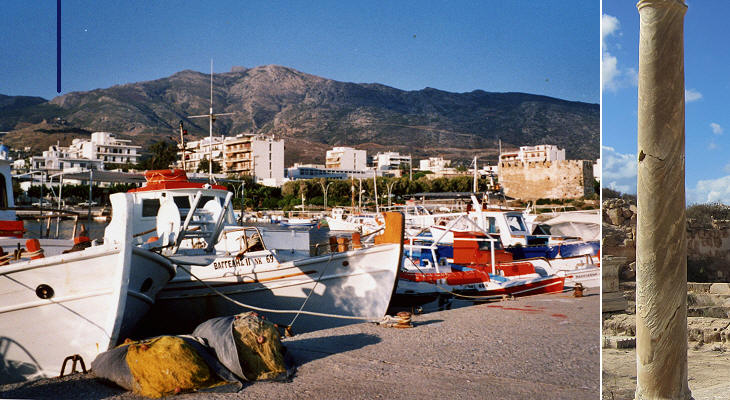 (left) View of the fortress (under the blue line) and of the sea tower from the mordern harbour of Karistos; (right) a "cipollino" column of the Forum of Sabratha in Libya

Upon the whole Island, there is but one place more (in addition to Chalcis), which may be called a Town, which is Castel Rosso, by the Turks called Kisil Hisar. It was formerly called Caristus, (as the Greeks still call it) standing in a deep Bay, at the SEt. of the Island. (..) Close by the water side, to the Eastward, are a great many marble Pillars; All ships that come to lade Velania (i. e. dryed Acorns) carry some away. Two miles to the North of the Port are a great many ruins more, and several foundations of walls.
Bernard Randolph, b. 1643. The present state of the islands in the archipelago.
The town of Karistos had little importance at the time of Ancient Greece. In the IInd century AD its importance grew as a consequence of the discovery of a particular kind of marble, which was largely used by Emperor Hadrian when he embellished Athens with new monuments (e.g. the Library) and when he built his Villa near Tivoli. The marble was green with white streaks and in the Italian Renaissance it was called cipollino ("onionish"), because the section of a column made of cipollino shows white and green layers resembling a cut onion. The marble was shipped to Rome, Athens and other parts of the empire from a small harbour a few miles off Karistos, which is still called Marmaris. You may wish to see the cipollino columns of Tempio di Antonino e Faustina in Rome. 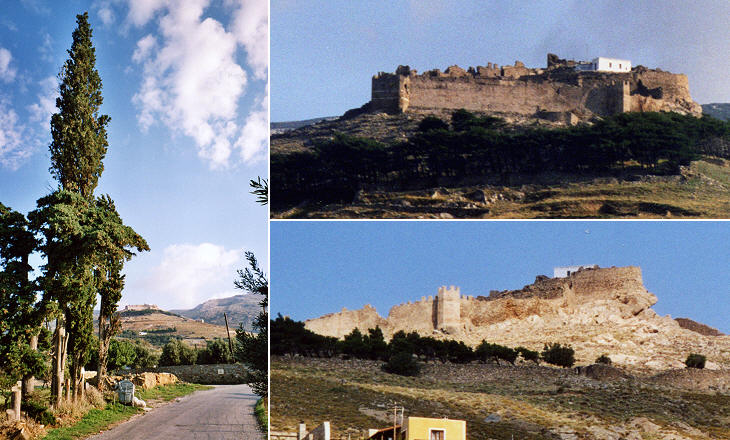 The Castle stands on a high and steep hill, above a mile from the Sea, having a large plain, which stretcheth towards the SWt. But affords little besides Mulberry trees, whereof there are store. The Town is built stragling upon two Mountains. Most of the houses are very mean, being made of red earth, dryed in the Sun. The Castle is to the Eastward standing very advantageously to defend itself against an Enemy. Randolph
Karistos was located on a hill a few miles from the sea. The Venetians made the bay of Karistos a key station in their trade with Constantinople and the ports of the Aegean Sea. Their convoys circumnavigated the Peloponnese and reached Karistos where the ships parted company and reached their specific destinations. The town was called Castelrosso (red castle) by the Venetians most likely because of the reddish colour of the clayey ground upon which it was built. It is not to be confused with Castelrosso (d'Asia). 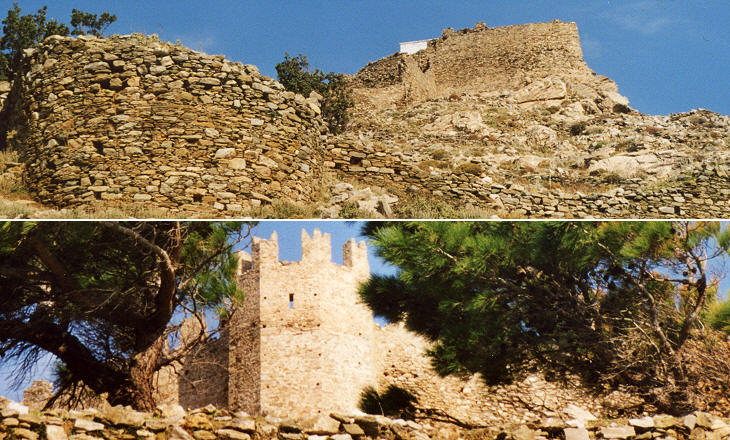 The walls and a (restored) tower

The castle and the fortifications were built by the Venetians to protect Karistos from being attacked by the Genoese. Venice and Genoa in the XIIIth and XIVth centuries were struggling for hegemony in the Aegean Sea and more in general in the Levant. The walls and the towers of Karistos were not upgraded to the needs of artillery warfare and Karistos was conquered by the Ottomans in 1470. 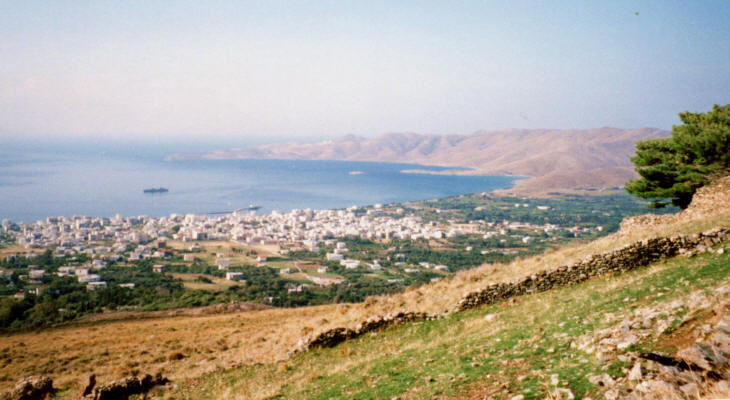 The Bay is open to the South Winds. Vessels which come from Canea, Malvasia, Napoli, Athens, or other parts, that way, and bound for Constantinople, do usually put in here to inquire for news of Privateers. For from the Mountains, to the North of the Castle, in a clear day may be seen the high Land of Scio; and no Vessel can pass the Streight of Andros, but what is seen from hence. Randolph
The view from the fortress takes in the whole bay and on a clear day also Attica and many islands. The tower protecting the bay

Small Vessels use to come here for shelter against the Privateers, but have been carryed away by them in the night; to prevent which one Ibrahim Aga, at his own charge, built a Fort of an Octagon figure with two Teer of Guns, 16 Guns in each Teer. After he had finished it, an order came from the Grand Signior (the Sultan) to have him Strangled. He had some Private Enemy who gave the Grand Signior to understand, that he had some bad thoughts, in building this Fort. His Estate was all confiscated; But through the intercession of great freinds it was most part recovered for the use of his Son, who lived at Negro Ponte. Randolph 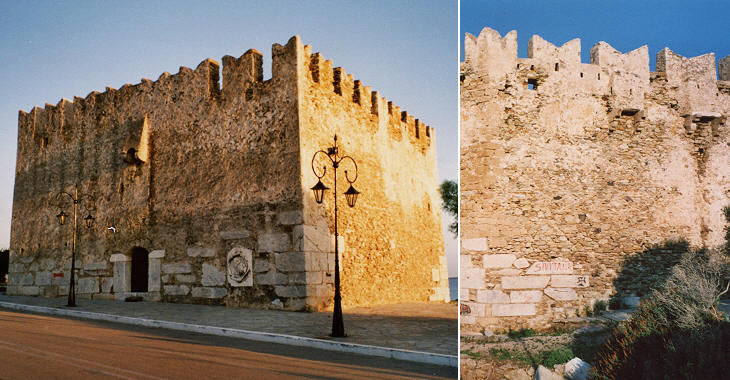 Other sides of the tower protecting the bay

The tower shows some "boxes" projecting beyond the walls. They were used to throw stones and hot oil upon the assailants. The background image of this page shows a modern Winged Lion, the symbol of Venice, standing on a column in the main square of Karistos.