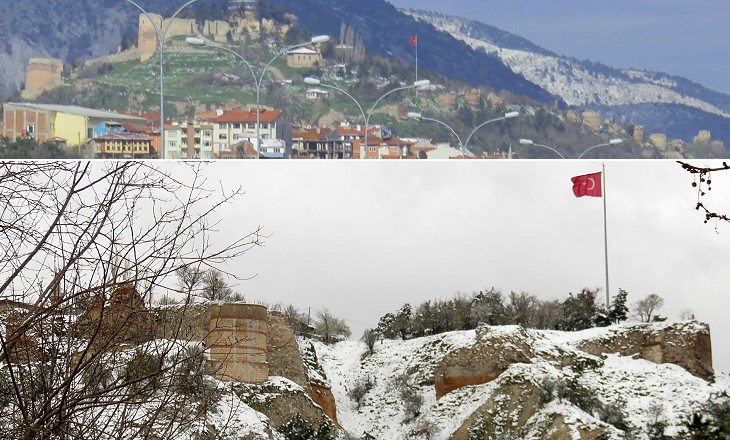 Views of the Byzantine Castle in April 2015

... and at last we found to our great joy, that an object which in the darkness we had fancied to be a curiously shaped rock, was the wall of the citadel of Kootaya.
Charles Fellows - Journal Written during an Excursion in Asia Minor in 1838
The route from Broosa through Kutaiah to Konieh in Caramania traverses chiefly a plateau of salt lakes (..). Kutaiah, the ancient Cotyaeum, is a considerable town embellished with mosques, caravanserais and baths and surrounded with gardens, vineyards and walks. It contains more than 10,000 houses and probably more than 50,000 inhabitants. The town is built on the side of a hill, the houses are handsome and the castle occupying the position of Cotyaeum appears to have been a place of great strength.
Conrad Malte-Brun - Universal Geography or a description of all parts of the world - 1822
The citadel was fortified by Emperor Justinian in the VIth century because of its key position on the road to Bursa and Constantinople. Kutahya does not retain monuments of its ancient past, but traces of it can be found in its Archaeological Museum. It is housed inside a Koranic school built when the town was the capital of the Germiyanid principality established in ca 1300, after the Seljuk Sultanate of Rum had split into smaller states. Goddesses were the main deities in the Anatolian tableland prior to the Hellenization of the region. Ovid described a festival in honour of Cybele in Fasti - Book IV (translated by A. S. Kline)

The goddess*s servants strike the bronze and sounding skins.
They beat cymbals for helmets, drums instead of shields:
The flute plays, as long ago, in the Phrygian mode.
The goddess ceased. I began: Why do fierce lions
Yield untamed necks to the curving yoke for her?
I ceased. The goddess began: Its thought their ferocity
Was first tamed by her: the testament to its her chariot.
But why is her head weighed down by a turreted crown?
Is it because she granted towers to the first cities?
She nodded. I said Where did this urge to cut off
Their members come from? As I ended, the Muse spoke:
In the woods, a Phrygian boy, Attis, of handsome face,
Won the tower-bearing goddess with his chaste passion.
She desired him to serve her, and protect her temple,
And said: Wish, you might be a boy for ever.
He promised to be true, and said: If Im lying
May the love I fail in be my last love.
(Attis failed to keep his promise and..)
He tore at his body too with a sharp stone,
And dragged his long hair in the filthy dust,
Shouting: I deserved this! I pay the due penalty
In blood! Ah! Let the parts that harmed me, perish!
Let them perish! cutting away the burden of his groin,
And suddenly bereft of every mark of manhood.
His madness set a precedent, and his unmanly servants
Toss their hair, and cut off their members as if worthless. 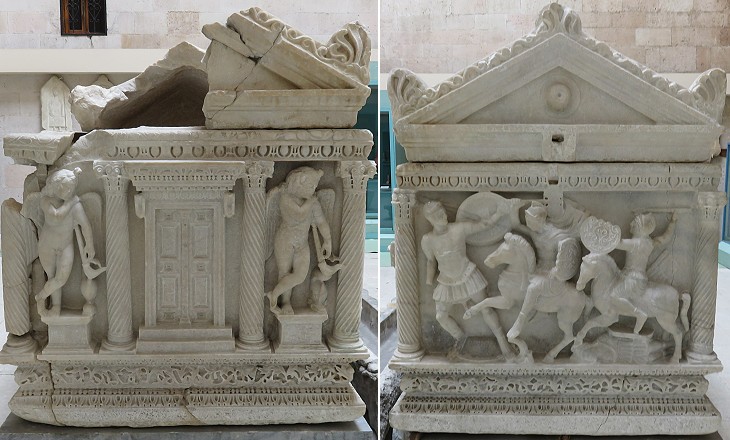 From Constantinople to Kutaya, my journey had been along the high road to Egypt; (..) but from Kutaya to Smyrna, it led to the southward and westward, through the ancient Phrygia and Lydia. Colonel Leake*, speaking of the line of march which I pursued, observes: "It is in the unexplored part of Phrygia (..) that the future traveller will seek for the Phrygian cities of Cadi, Azani, and Synaus". I went in the direction pointed out by Colonel Leake, and came upon two of the cities: Cadi and Azani.
George Keppel - Narrative of a Journey across the Balcan in the Years 1829-1830
*William Martin Leake - Journal of a Tour in Asia Minor - 1824
George Keppel, 6th Earl of Albemarle, reached Aizani after a two-day journey from Kutahya. He was the first European traveller to describe its ruins in detail. Archaeological Museum: roughly sculptured gravestones showing the importance of agriculture in the region

Speaking of the vegetables of Kutaya, all of which are excellent, I must not forget the cabbages, which I suppose to be the largest in the world; so large, indeed, that I dare not risk my reputation for truth in stating their exact dimensions, knowing that many Englishmen are incredulous as to the size even of the turnips of my native country of Norfolk. Keppel
The descriptions of the countryside around Kutahya made by Keppel and other travellers do not indicate they noticed large wheat fields which had been in existence during the first centuries AD. 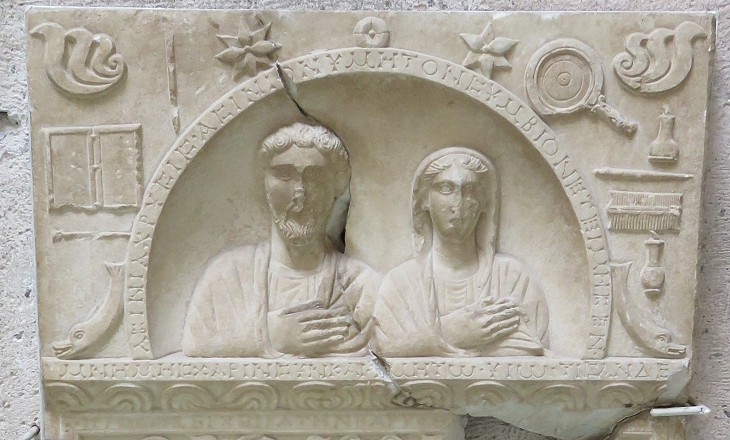 Archaeological Museum: gravestones with symbols of a couple's daily life (writing tools for the man and toilet ones for the woman). The two show their right hands, perhaps a reference to "dextrarum junctio", the joining of the right hands during the wedding ceremony, or just a parting gesture

Some elaborate gravestones found in the district of Kutahya are a sign of its citizens' wealth. They indicate that there was a middle class who could afford the cost of a marble relief to immortalize their relatives in a composed attitude. 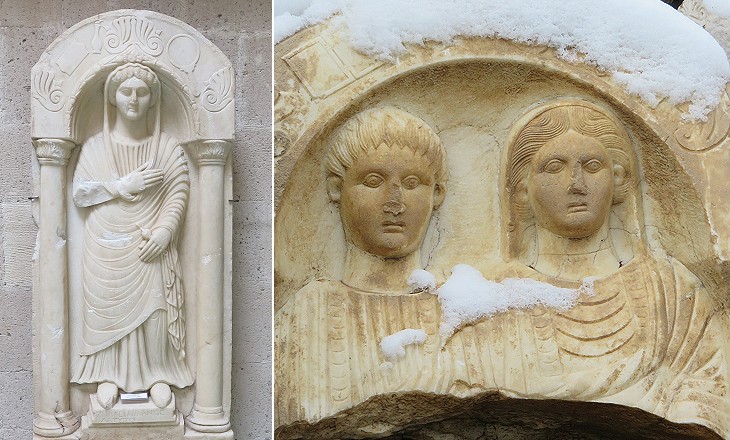 The quality of some gravestones shows that they were made by workshops employing skilled sculptors. They were most likely based in the proximity of the celebrated white marble quarries of Docimeium, near Afyonkarahisar. 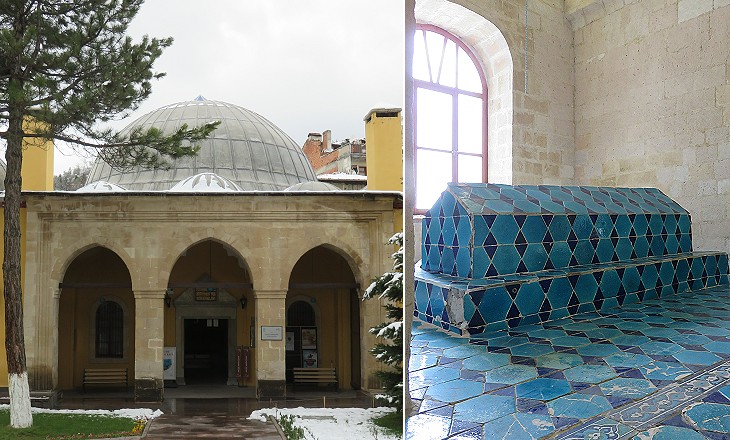 The Germiyanid principality ended in 1429 when its last ruler died. In the late XIVth century the Germiyanids were forced to acknowledge the suzerainty of their Ottoman neighbours. Yakup II formally bequeathed his principality to Sultan Murad II during a visit he made to him at Edirne in 1427. 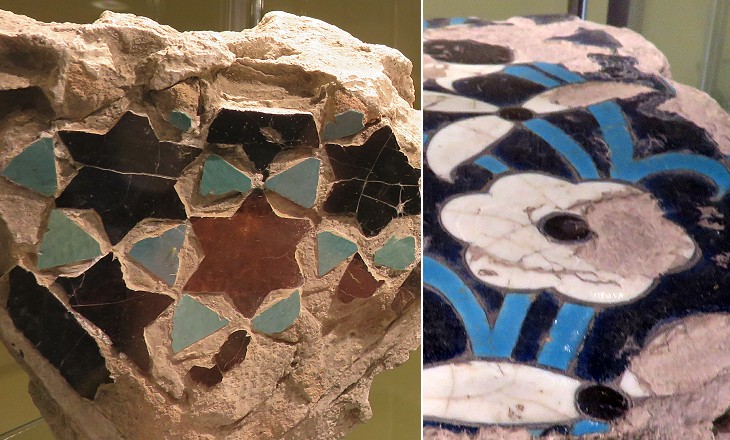 The museum has some very early examples of glazed ceramic tile decoration. At the very beginning it was based on mosaics of cut tiles having a different colour, with only three/four colours being available. They were developed in Persia first and the portal of the Yazd Friday Mosque provides an excellent example of this type of decoration. 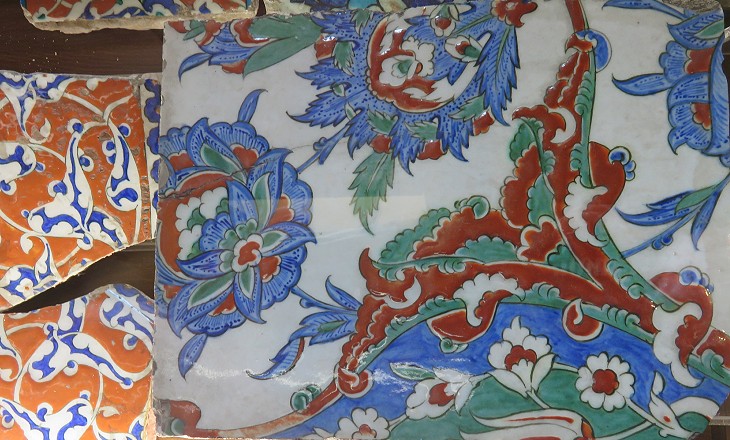 In the early XVIth century Ottoman Sultan Selim I waged war on the Safavid rulers of Persia and conquered Tabriz, their capital. He deported many skilled tile makers to Iznik, a town near Bursa (and not very far from Kutahya). Some of them were Armenians and by using an iron-rich red earth of their native country they were able to add red ("Armenian bole") to their palette. Tiles with "Armenian boles" were used for the decoration of large mosques (e.g. Rustem Pacha Camii) and Topkapi Sarayi at Constantinople. 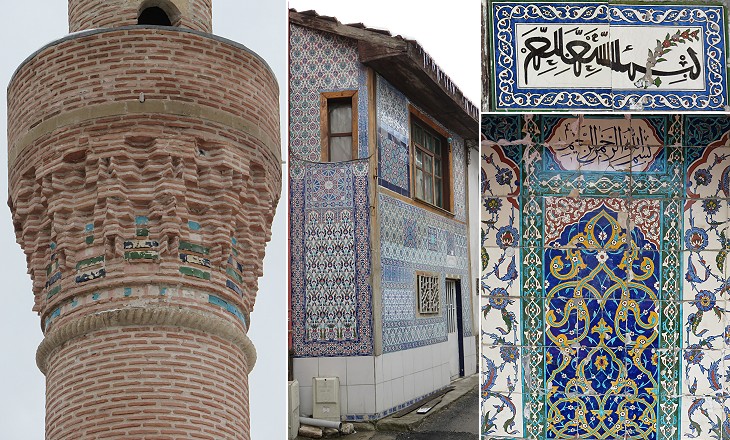 The principal imports are French and English cottons; and the exports, wool, the goat's hair, of which shawls are made, hare skins, and a considerable quantity of opium; of this last article, three thousand ochs (a measure of weight) were exported this year. Keppel
The earliest tile workshops at Kutahya are recorded in the late XIVth century and they grew of importance by using the techniques developed at Iznik. Tile making declined during the XVIIIth century and European travellers did not mention it in their books. It was revived in the late XIXth century, thanks to large deposits of clay in the area. 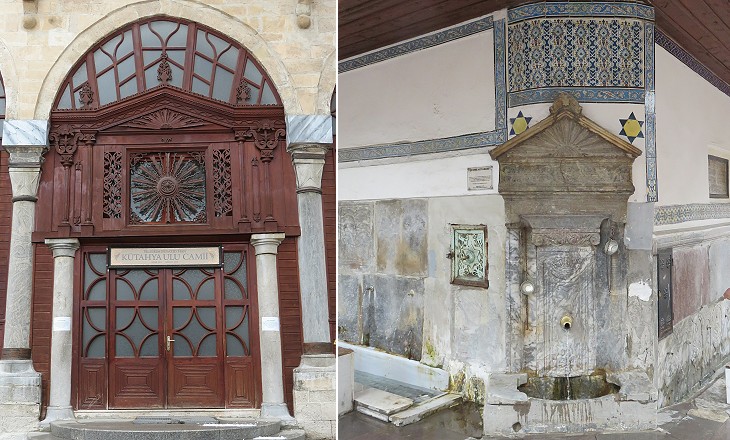 There is little to be said of Kootaya. Through its streets run several rivulets, which carry away the remains of animals, often a nuisance in Turkish towns: the streets are wide, and the houses better built than usual. (..) The cooking is excellent, and nothing objectionable is met with in it; no garlic of Italy, sour greens of Germany, or unknown compounds of France. Fellows.
Fellows was one of the many early XIXth century travellers who were interested only in Classical Greek monuments and statues, so he rarely noticed mosques. Ulu Cami was built at the beginning of the XVth century, but it was largely modified afterwards. The wooden portal most likely dates to the XIXth century and the tiles of the fountain for ablutions are modern. 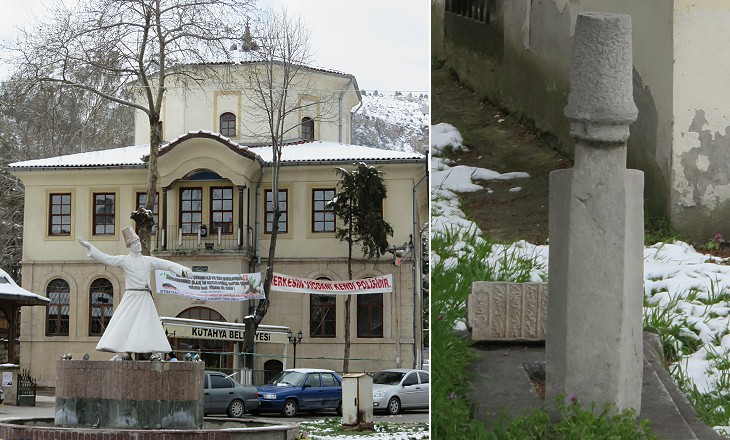 (left) Donenler Camii (donenler = those who whirl), the mosque of a Dervish lodge; (right) tombstone of a Dervish, with the typical felt cap

Whirling Dervish shows have become a typical component of Turkey package tours and statues of whirling dervishes can be found in many Turkish towns (that at Kutahya actually rotates). They were members of an order founded at Konya by followers of Mevlana Jalal-ad-Din Muhamma in the XIIIth century. 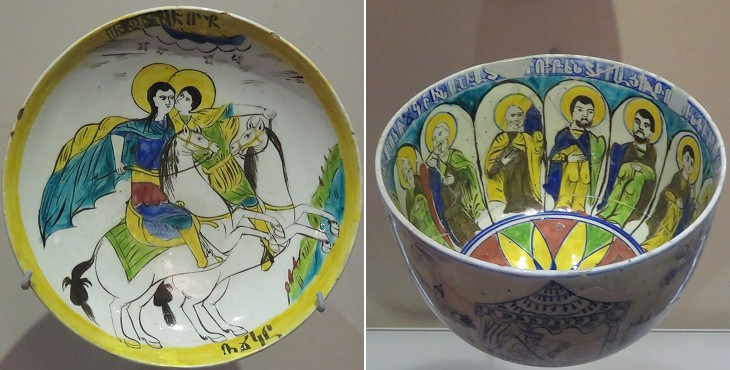 The image used as background for this page shows a detail of a tile at the Museum. 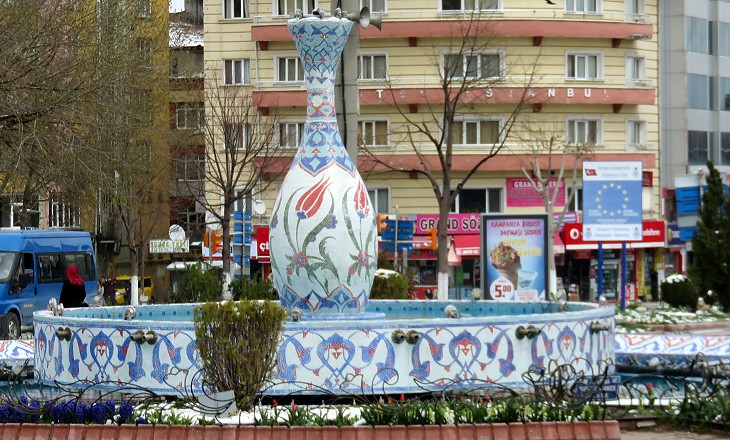 Fountain with the symbol of the town