This section of the website deals with locations along the Mediterranean coast of Asia Minor (today's Turkey) between the two historical regions of Pamphylia (the region of today's Antalya) to the west and Cilicia to the east. A high range of mountains (Taurus) runs parallel to the coast and separates it from the Anatolian tableland.
In the IInd century BC Cilicia was conquered by the Romans or by their allies, the Kings of Pergamum; trade between the ports of Cilicia, such as Tarsus and Rome greatly increased, but the security of the ships moving westwards was threatened by pirates who had their bases along the coast which is shown in the map here below. 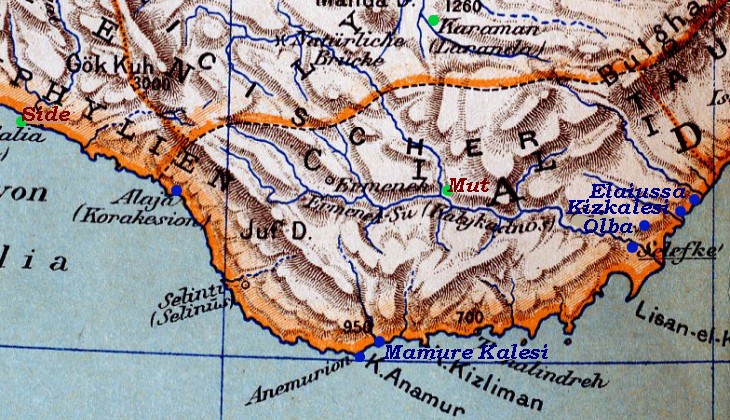 The assaults by the pirates were so frequent that in 67 BC the Roman Senate gave Gneus Pompeus (Pompey) an imperium infinitum (extraordinary authority) for a period of three years to eradicate the pirates from the Mediterranean Sea. The pirates were attacked by a fleet of 500 ships and in a few months Pompey gained a full victory. In recognition of this success he was crowned with the special crown used to celebrate naval victories (it resembled a war ship and it is shown in the image used as background for this page). 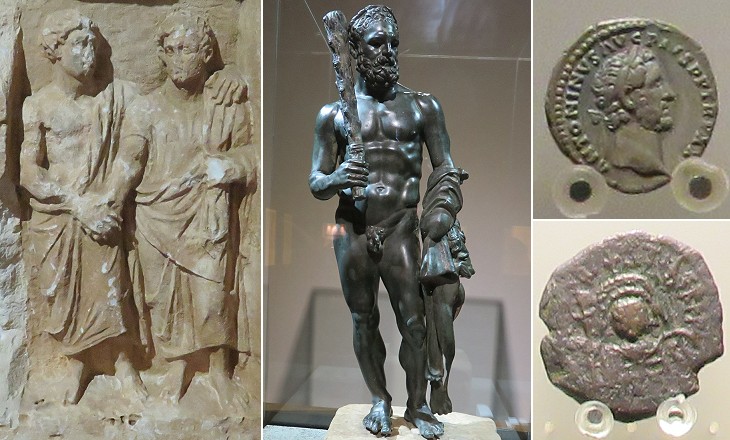 Archaeological Museum of Alanya: (left) gravestone showing a Roman couple's "dextrarum junctio", the joining of right hands during the wedding ceremony; (centre) small bronze statue of Hercules; (right) coins of Emperor Antoninus Pius (above) and of a Byzantine emperor (below)

The long period of peace which followed Pompey's campaign favoured the development of many ports along this coast, either where a headland provided ships with a natural shelter (e.g. Alanya and Anemurium) or a river was large enough to be navigable (e.g. Silifke). The works of art found in the region show the level of prosperity achieved by the inhabitants of these towns. 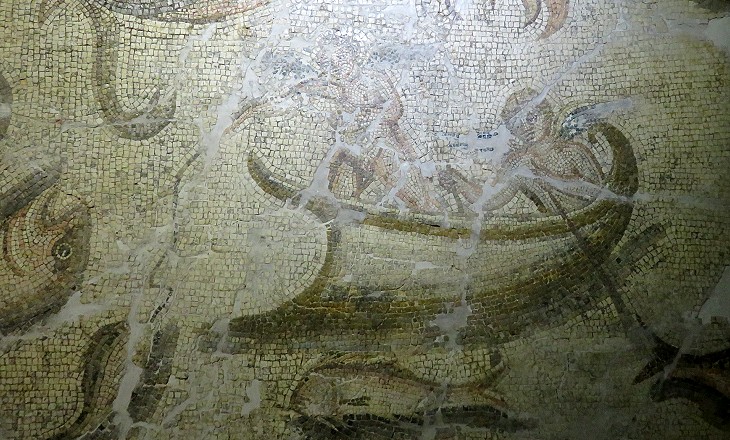 Archaeological Museum of Alanya: IIIrd century mosaic with a sea subject from Selinus, a port on the River Kestros between Alanya and Anemurium (see a similar mosaic in Libya)

In addition to those of its ancient past, the coastal strip retains memories of the periods during which it belonged to the Armenian Kingdom of Lesser Cilicia (based in Sis) and to the Karamanid rulers of Laranda. In the second half of the XVth century the whole region became part of the Ottoman Empire, but it was often referred to as the Coast of Karamania by European travellers.
This section contains many excerpts from:
Francis Beaufort, Captain of HMS Frederikssteen, a frigate of 32 guns: Karamania; or a brief description of the South Coast of Asia Minor, and of the Remains of Antiquity collected during a survey of that coast, under the orders of the Lords Commissioners of the Admiralty, in the years 1811 & 1812 - Published in 1817
Francis Beaufort (1774-1857) was appointed captain in the Royal Navy in 1810 and he showed his skill as a cartographer by conducting a survey of the estuary of the Rio de la Plata. In 1811 he was asked to chart the coast of Southern Anatolia. At that time Britain had already a military presence in the Mediterranean Sea by controlling Malta and some Sicilian ports, e.g. Messina. Beaufort applied the same precision he used for maps to the description of some of the ancient ruins he noticed along the coast. He was wounded at Ayas and made return to Malta. In 1846 he retired from the Royal Navy with the rank of rear admiral and he was knighted in 1848. His name is associated with a scale to measure wind speed above the sea surface. 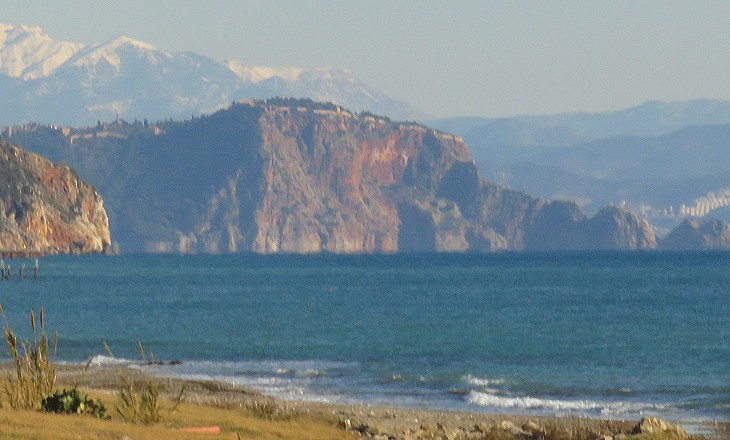 The promontory of Ala(n)ya rises abruptly from a low sandy isthmus, which is separated from the mountains by a broad plain; two of its sides are cliffs of great height, and absolutely perpendicular (..) in short, it forms a natural fortress that might be rendered impregnable. Beaufort 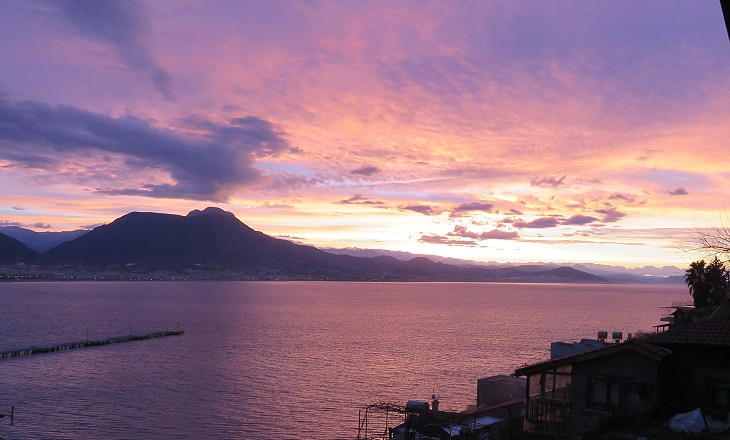 The most numerous and powerful pirates (..) manned their ships and awaited Pompey's attack near the promontory of Coracesium in Cilicia; here they were defeated in a battle.
Plutarch - Life of Pompey - translation by Bernadotte Perrin.
The eastern side of the headland shelters a large bay where Pompey gained a decisive victory over the pirates. Coracesium, the Latin name of Alanya, derived from a Hittite word meaning protruding rock; the Byzantines renamed the town Kalonoros (beautiful mountain). 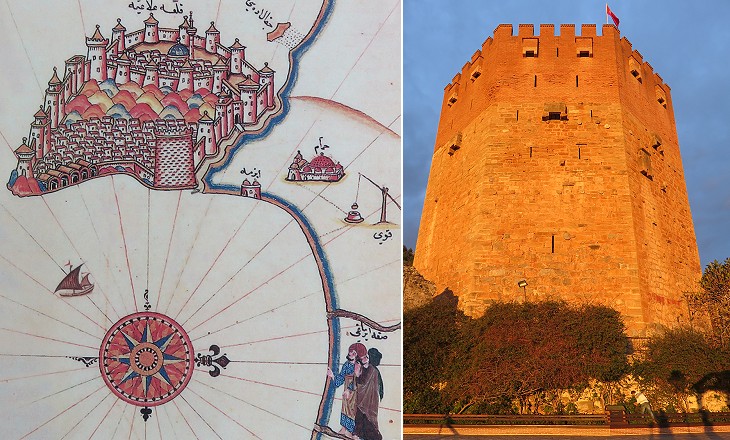 (left) Alanya in a XVIth century map from the "Book of Navigation" by Piri Reis, an Ottoman cartographer; (right) Kizil Kule (Red Tower)

The bay is open to southerly winds; the anchorage is indifferent; and there is no harbour or pier. But we know that wherever the industrious colonists of ancient Greece formed a maritime settlement, they endeavoured by art to supply the deficiencies of nature; and it is not probable that a place of such strength and consequence as this, should have been left destitute of some shelter for its vessels. Beaufort
The map by Piri Reis explains the absence of a pier noted by Beaufort. When the map was drawn the harbour of Alanya was a canal dug in the isthmus which added to the fortifications of the town in addition to sheltering ships. The entrance to the canal was protected by Kizil Kule, a tower of unusual size. When Beaufort visited Alanya the canal was silted; because he did not mention Kizil Kule, we may assume the tower was not as imposing and high as it is today after a major restoration and the reconstruction of its crenellations. 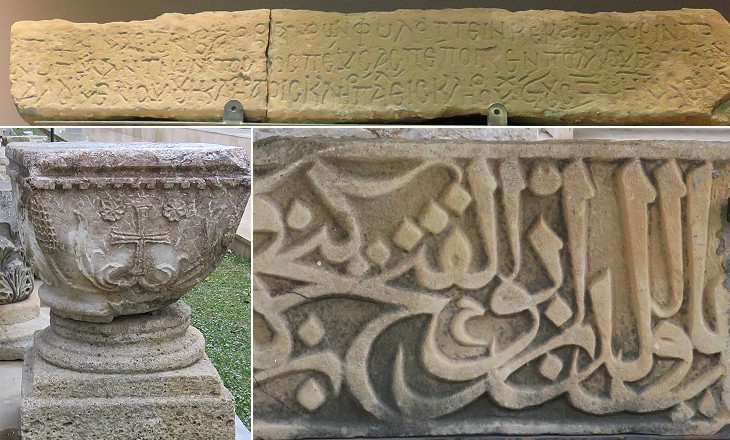 In the VIIth century the Byzantines lost the eastern provinces of their empire (Egypt, Palestine and Syria) to the Arabs. This event caused a sharp decrease in the trade along the coast of Karamania. Arab raids added to the decline of the region and Kalonoros, although being listed among the bishopric sees which took part in the 680 Third Council of Constantinople, steadily lost importance.
After the 1071 Battle of Manzikert a large part of Asia Minor was conquered by Seljuk Turks, but in 1120 the Byzantines recovered part of the lost territories, including the coast of Karamania. In 1221 Seljuk Sultan Kaykobat I Ala ad-Din conquered Kalonoros and set his winter residence there (his usual residence was in Konya). The town was renamed Alaye after the Sultan's name (in the 1930s it became Alanya). 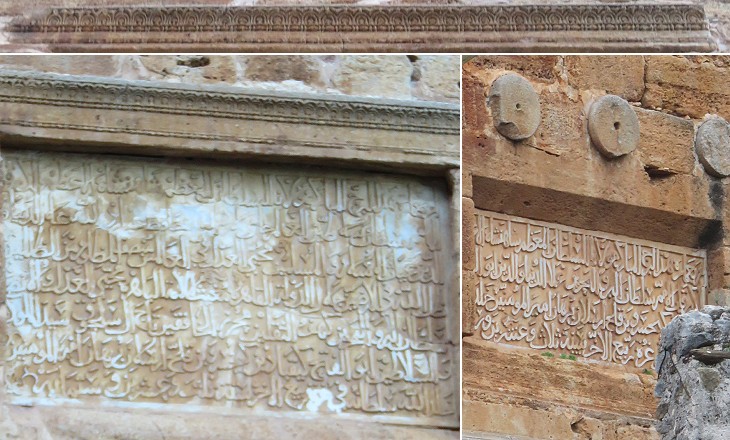 Kizil Kule: details showing some ancient materials which were utilized for the construction of the tower and two inscriptions celebrating Kaykobat I Ala ad-Din as the "Sultan of the Land and the Two Seas" (Kara Deniz/Black Sea and Ak Deniz/White Sea i.e. the Mediterranean Sea)

Sultan Kaykobat I was worried he could lose his newly acquired possession and in 1226 he built Kizil Kule. Alanya was at risk of being raided/seized by the Genoese or the Venetians who competed for supremacy in the Eastern Mediterranean Sea or by the Lusignan Kings of Cyprus, whose fleet could easily reach the town from Cirenes. 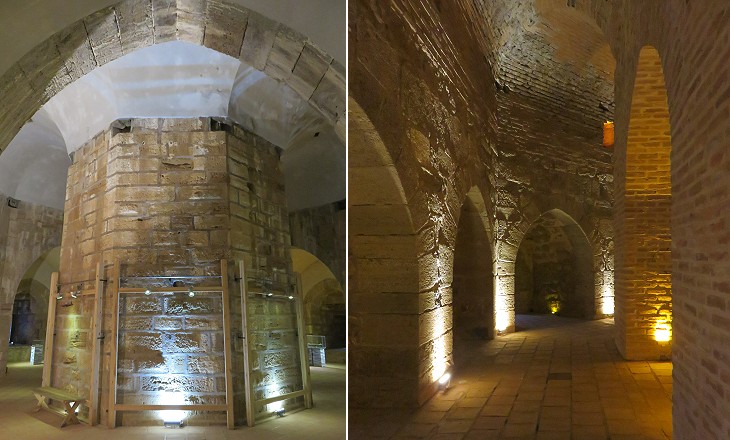 Kizil Kule, the landmark of Alanya, is a very popular monument throughout Turkey and it was shown on the 250,000 TL note between 1990 and 2005 (it opens in another window). Its stout structure recalls some towers/fortresses built by the Crusaders in Syria (e.g. Safita). It was linked by walls to the Upper Town. Today it houses a small historical museum. 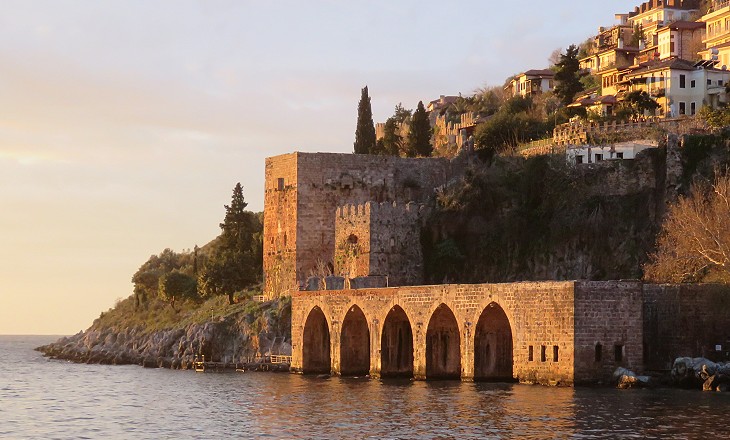 The map by Piri Reis clearly shows the arsenal with five dockyards which Sultan Kaykobat built next to Kizil Kule. A high tower where a foundry was installed protected the other side of the Arsenal.
In the XIVth century Alanya was conquered by the Karamanids. The conquest of Constantinople in 1453 and later on of the whole Eastern Mediterranean countries by the Ottomans led to the development of new trade routes and Alanya was almost abandoned. Beaufort found the town in a very run-down condition: The streets and houses were miserable; there are but few moskes, and they are mean; there were no signs of commerce; nor can the population have exceeded fifteen hundred, or two thousand at the utmost. Alanya today is a very popular holiday resort, especially among German tourists and retired people. The whole isthmus is occupied by modern buildings which stretch along the coast to reach some popular beaches. Tophane gives its name to the only remaining neighbourhood in the old town. Some of its traditional houses have been carefully restored and turned into cosy small hotels. 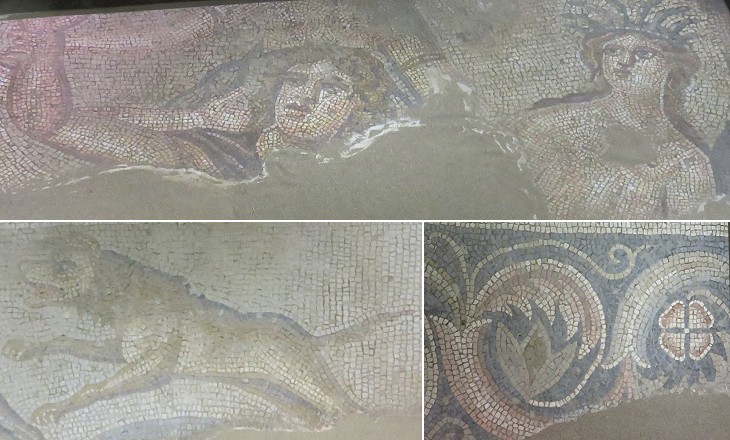 The Archaeological Museum of Alanya was opened in 1967 and renovated in 2012 to house some of the findings in the region. A fine mosaic represents Hylas, a young companion of Hercules, being taken captive by water nymphs. Hylas vanished to the great despair of Hercules. The central scene is surrounded by an elaborate frame which can also be seen in many mosaics at Antioch. Archaeological Museum of Alanya: a real peacock, not one in a mosaic or a relief as occurs in most archaeological museums

Move to page two - A Walk to the Upper Town