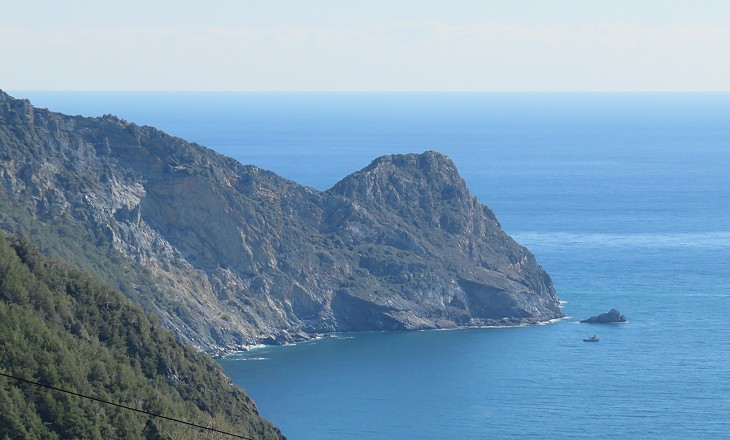 On the morning of the 27th to the great surprise of the pilot we found ourselves in open sea and out of sight of any land. A calm overtook us, the consternation was general. Where were we? Were we within or without the island of Cyprus? The whole day passed in this extraordinary dispute. To have talked of taking the reckoning or the altitude would have been Hebrew to our sailors. When the breeze sprung up towards evening they were thrown into a new embarrassment. On what tack were we to steer? The pilot who imagined that we were between the north coast of Cyprus and the gulf of Satalia (Attalia) proposed to keep the ship's head to the south to get sight of the former, but the consequence would have been that, had we passed the island we should have gone by following that point of the compass right to Egypt. (..) My opinion was asked for in all cases of any difficulty the Greeks and Turks invariably have recourse to the Franks. My advice was that we should steer to the eastward for an obvious reason: we were either within or without the island of Cyprus; now in either case by standing to the east we should be making progress. Besides if we were within the island we could not fail to see land to the larboard or starboard in a very short time: either at Cape Anemur in Caramania or at Cape Conachitti (Kormakitis) on Cyprus.
François-René, vicomte de Chateaubriand - Travels in Greece, Palestine, Egypt, and Barbary, During the Years 1806 and 1807 - Translation by F. Shoberl 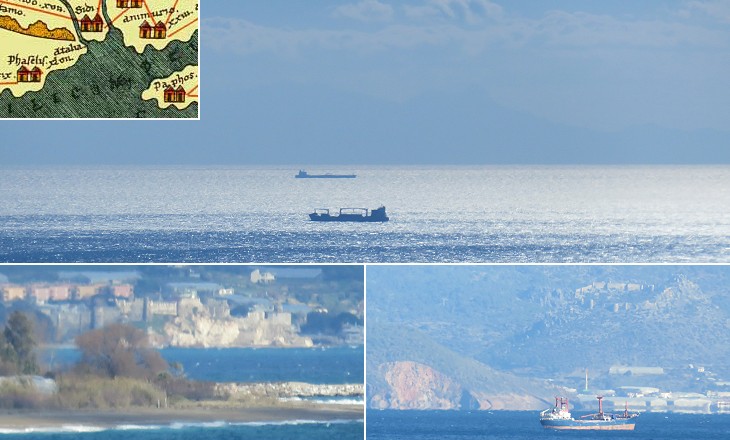 Views from the tip of the cape: (above) coast of Cyprus near Girne; (below-left) Mamure Kalesi; (below-right) Sofra Kalesi, a medieval castle on a hill east of Mamure Kalesi; (inset) detail of "Tabula Peutingeriana", a Vth century map of the roads of the Roman Empire, showing Anemurium, Phaselis, Side and Paphos

Cape Anamur (Lat. Promontorium Anemurium), because of its position at the southernmost point of the Anatolian peninsula, was bound to attract the attention of seamen from the earliest ages of navigation, but the ruins of the town we see today are dated after Pompey's campaign against the pirates (67 BC). Anemurium was a flourishing port until the end of the VIIth century when it became a target for Arab raids and it was eventually abandoned. No major ports replaced it in the area, but the fortress of Mamure Kalesi housed a small harbour. 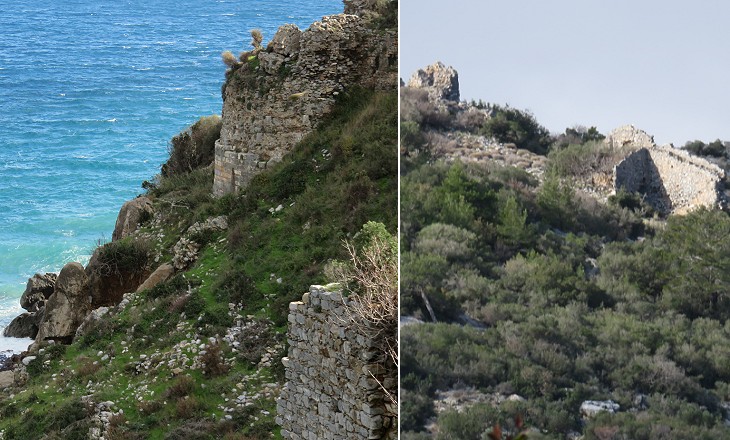 Cape Anamour terminates in a high bluff knob one side of which is inaccessible; the other has been well fortified by a castle and outworks placed on the summit from whence a flanked wall with towers descends to the shore and separates it from the rest of the promontory. Two aqueducts that wind along the hill for several miles supplied this fortress with water. Within the walls are the remains of some large buildings and two theatres and outside a vast number of tombs. The city is now altogether deserted.
Francis Beaufort, Captain of HMS Frederikssteen, a frigate of 32 guns: Karamania; or a brief description of the South Coast of Asia Minor, and of the Remains of Antiquity collected during a survey of that coast, under the orders of the Lords Commissioners of the Admiralty, in the years 1811 & 1812 - Published in 1817 The Large Baths, the apse of a basilica and other buildings seen from the theatre. In the background the coastline where modern Anamur is situated

The first archaeological excavations at the site of Eski Anamur (Old Anamur) were undertaken in the late 1960s and they focussed on its large necropolis. They eventually included the main monuments of the rich Roman town which stood on the eastern side of the cape. The buildings were mainly made of bricks and were most likely decorated with marbles and columns, but by and large very few fragments of them have been found. This can be explained by the fact that the town was so visible that it was looted for centuries. 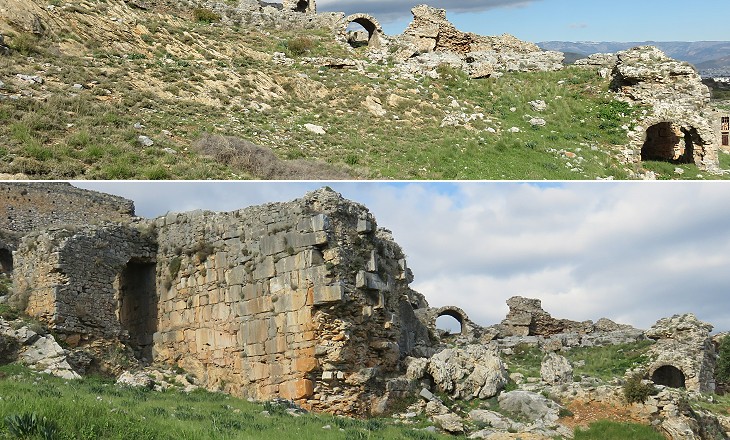 Theatre: (above) site of the cavea; (below) wall supporting the seats

Yet there are no buildings in the neighbourhood for which the stones could have been purloined; and the only alternative is, that everything worth the removal has been transported to the island of Cyprus, which is at no great distance, and where arts and commerce flourished long after this coast had become the prey of a succession of ruffian conquerors. Beaufort
The entire seating area of the theatre as well as its stage and the decorated wall behind it have disappeared. Their stones were most likely removed to build Mamure Kalesi or carried to Cyprus. The huge walls supporting the seats were less useful because they were only faced with stones. It is difficult to assess the audience the theatre could house, but it must have exceeded 3,000 at the least. 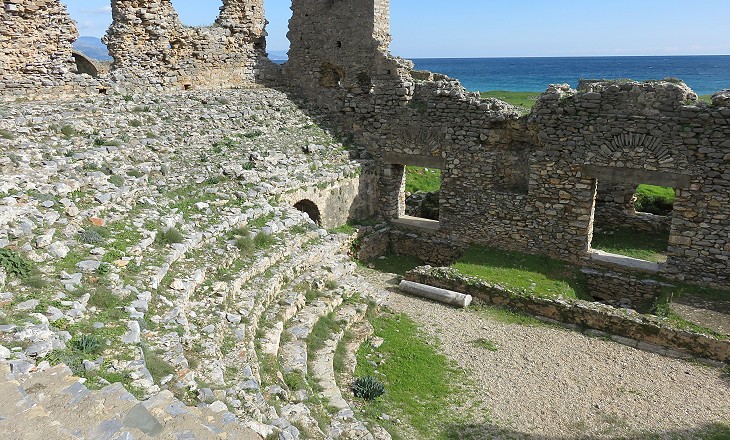 The citizens of Anemurium could gather in a large odeon to listen to music or poetry (see that at Philadelphia /Amman). This type of buildings was usually roofed, but that at Anemurium might have had a removable roof, because summers are extremely hot in the region and the building is exposed to the sun all day. The economy of modern Anamur is based on growing bananas, strawberries and tropical fruits. Today anamur in Turkish is a synonym for domestically-produced bananas. 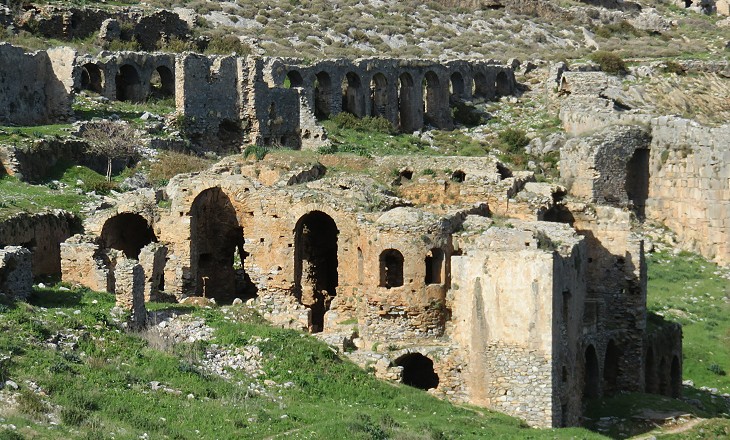 Baths near the Theatre and aqueduct

The construction techniques (use of arches/vaults, fired bricks, mortar, etc.) employed at Anemurium have proved very effective, in particular at a bath complex near the theatre, which retains most of its original structure. It was supplied by one of the two aqueducts of Anemurium. The other aqueduct runs at a higher level to provide water to the citadel. Archaeologists have identified other smaller baths. 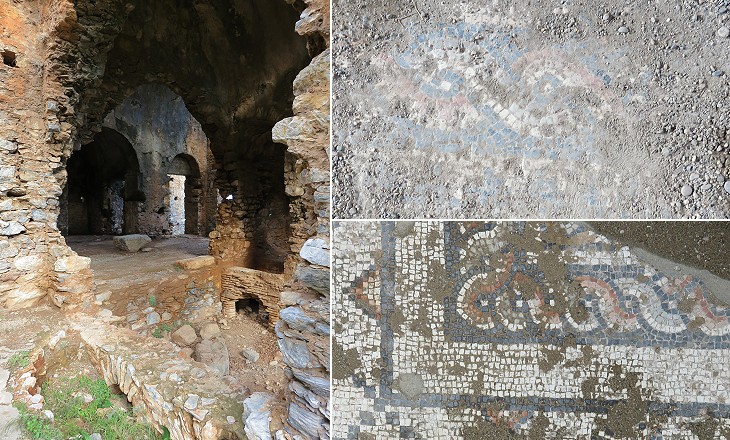 (left) Baths near the Theatre; (right) mosaic floor at these baths (above) and at the Large Baths (below)

In 260 Sassanid King Shapur invaded the eastern provinces of the Roman Empire and his troops stormed Anemurium. In the following period frequent civil wars weakened the power of the Roman Emperors and the town was subject to raids by the Isaurians, tribesmen who lived in a valley beyond the high mountains which run along the coast. Anemurium regained some peace in the Vth century, but its main buildings were no longer used for their original purpose, as archaeologists have found evidence of workshops and dwellings inside their walls. 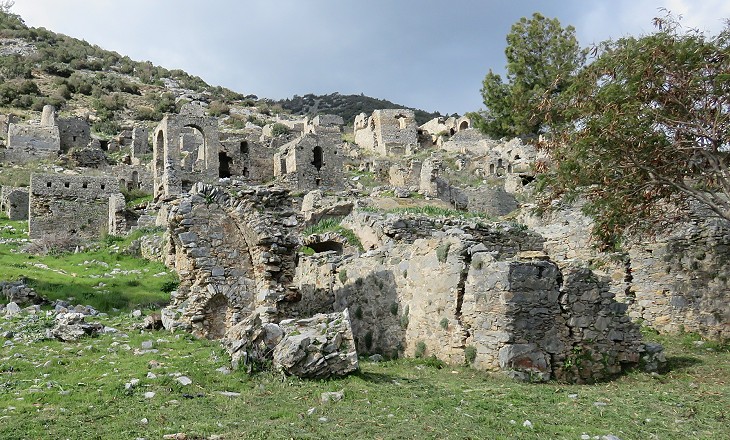 Necropolis, the most striking feature of the archaeological site

We then hastened to examine a wide field of ruins outside of the walls, which at first sight had appeared like the remains of a large city. It was indeed a city - but a city of tombs - a true Necropolis. (..) The care and skill bestowed by the ancients, to render durable the abodes of the dead, is more than ordinarily impressed upon the mind at this place; for though all the tombs have been long since opened and ransacked, the walls are still sound. Beaufort
necropolis means "city of the dead" and Anamur lives up to this translation with more than 350 individual tombs built next to each other along a grid of streets. They are all very similar with a lower room which housed sarcophagi or cinerary urns and an upper room for periodical funerary ceremonies (see a page on this topic). You may wish to see the Great Necropolis of Porto near Rome or that of Tyre in Lebanon. 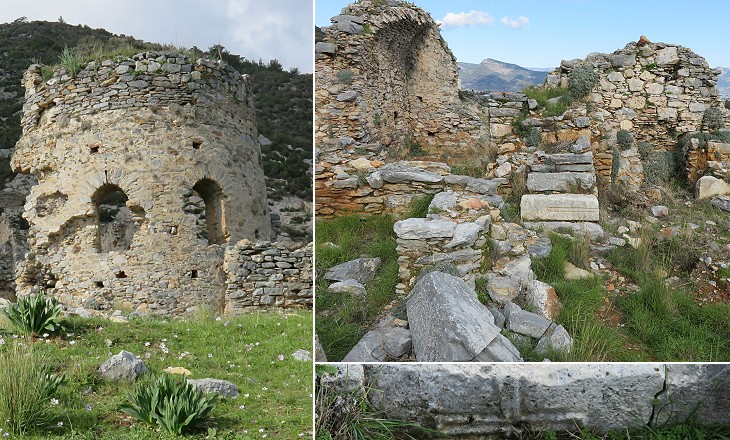 The image used as background for this page shows a vaulted room of the Baths near the Theatre. 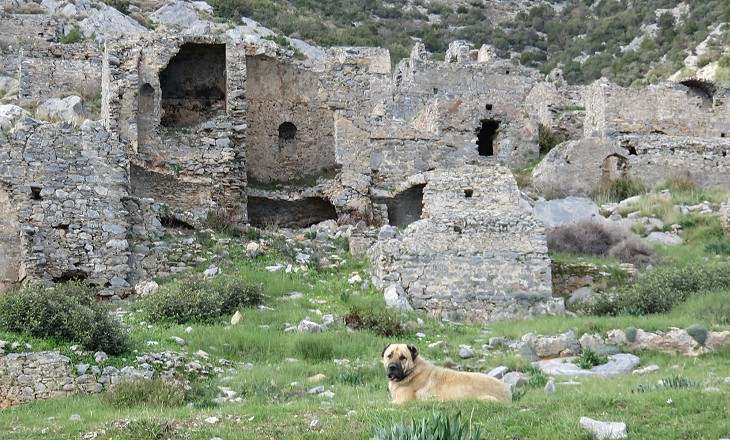 The Lonely Warden of the Necropolis