Similar to nearby Seleucia ad Calicadnus (Silifke), Olba was founded by Seleucus, a general of Alexander the Great, who after the death of his leader, ruled over Anatolia and Syria. The town was entrusted to the Teucrides, a dynasty of priests. The location was identified only at the end of the XIXth century. The site began to be protected by the State in 1970. 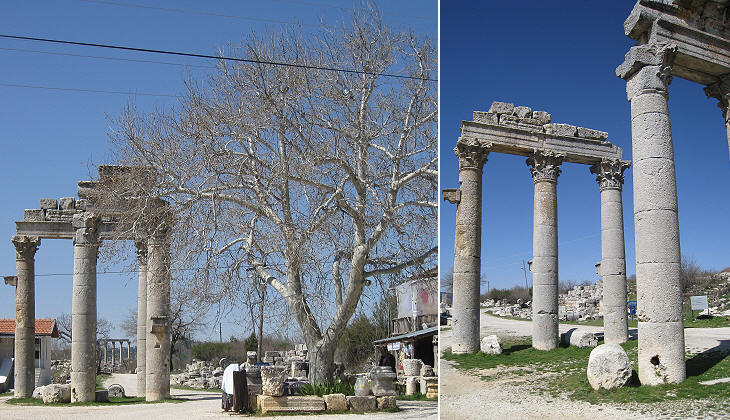 Views of the portico at the eastern entrance to the town

When the Romans conquered the region they established a sort of protectorate over Olba which continued to be ruled by its priests, at least until Emperor Vespasian reorganized the administrative structure of the region. The Romans allowed the Teucrides to mint coins which made reference to the emperors; archaeologists and numismatists have been able to establish the territory controlled by Olba (which included Elaiussa) and its history by analyzing the coins found in the region. 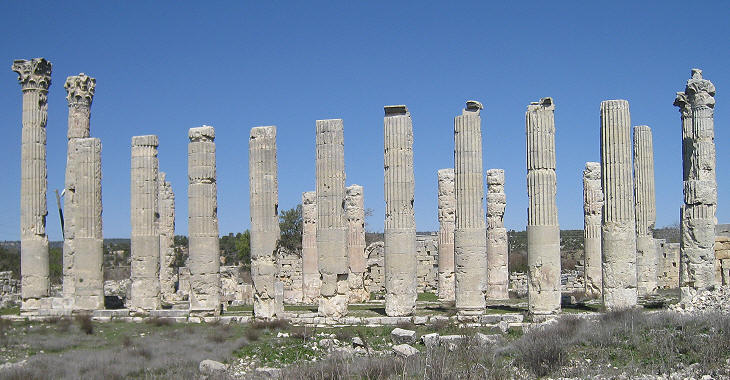 Diocaesarea, the Latin name of Olba which means town of God and Caesar, is a confirmation of the religious importance of the town. A large Temple to Zeus was founded in the IIIrd century BC; it was built at the centre of a rectangular courtyard, the access to which was most likely allowed only during ceremonies. With that of Euromos it is one of the finest examples of Corinthian temples in Asia Minor. Diocaesarea was also the name the Romans gave to Sepphoris in Galilee.

Temple to Tyche, also in the image used as background for this page

Prior to the process of Hellenization, in Asia Minor the prevalent beliefs were centred around female deifications of the Earth Mother, such as Cybele; even after the adoption of the Greek pantheon the towns of the region continued to build large temples dedicated to goddesses (to Artemis at Ephesus, to Aphrodite at Afrodisias, to Leto at Letoon, etc.).
In Olba the second largest temple was dedicated to Tyche, a goddess who protected the development of towns and whom the Romans called Fortuna (Luck). She was usually portrayed with a tower on her head, e.g. at Ephesus and she continued to be depicted in Christian time, e.g. at Scythopolis. 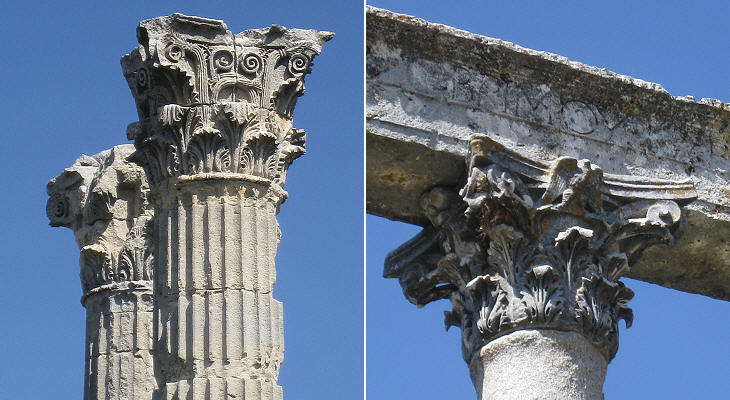 The temple to Tyche was most likely rebuilt during the Roman rule on a previous shrine; its columns are made of Egyptian granite and small eagles (a symbol of Rome) can be seen on the capitals. The elaborate design of the capitals of both temples are an indication that Olba was in contact with the most developed centres of the eastern Mediterranean region. 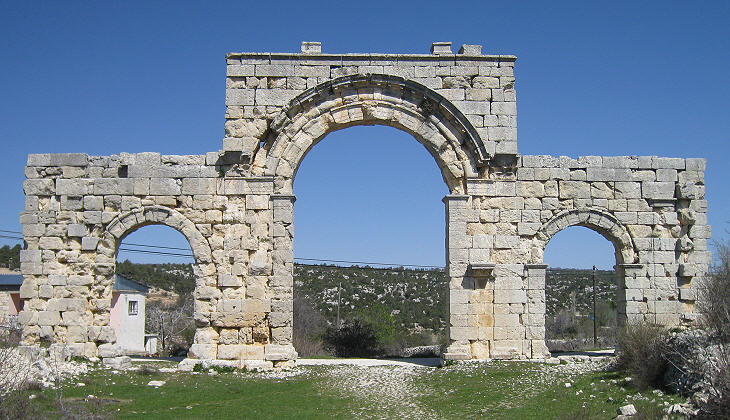 Ierapolis and Attalia had gates similar to that built by the Romans at Olba; they were not part of a fortification system, but had only decorative and administrative purposes; Olba, which is located on a plateau, was at the centre of a net of roads and probably an important road started from its northern gate or religious processions entered the town through it.

Uzuncaburç, the Turkish name of the village near the archaeological area, means tall tower and is a reference to a square tower which was built in the early days of Olba on a commanding position; a long inscription indicates a restoration during the Roman period; most likely at that time the tower did not have a military purpose, but was a symbol of the town (some coins of Olba show a crenellated tower). 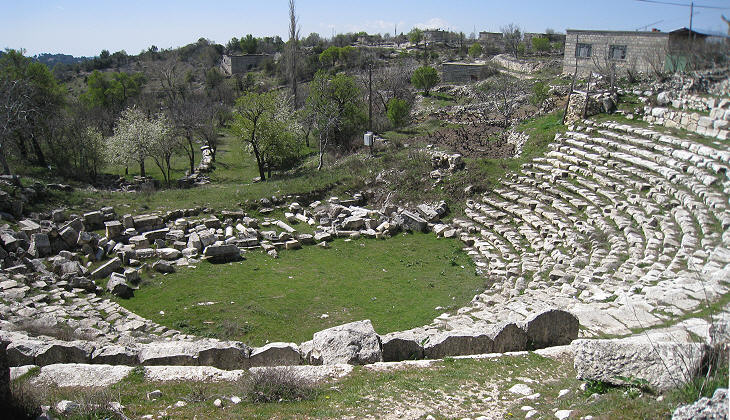 The theatre of Olba was located outside its eastern entrance and it has the usual features of such Roman buildings; it was built in the IInd century AD, a period of particular wealth for the region (see a section of this website showing many Roman theatres). 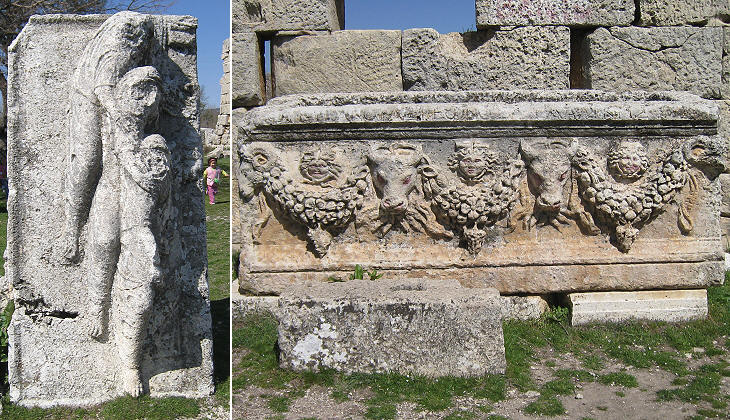 During the most flourishing periods of the Roman Empire the manufacturing of sarcophagi was concentrated in some locations where stones and skilled manpower were available (see a page on this topic). For this reason the number and quality of sarcophagi found at Olba are an indication of the wealth of the town, rather than of a local artistic development. 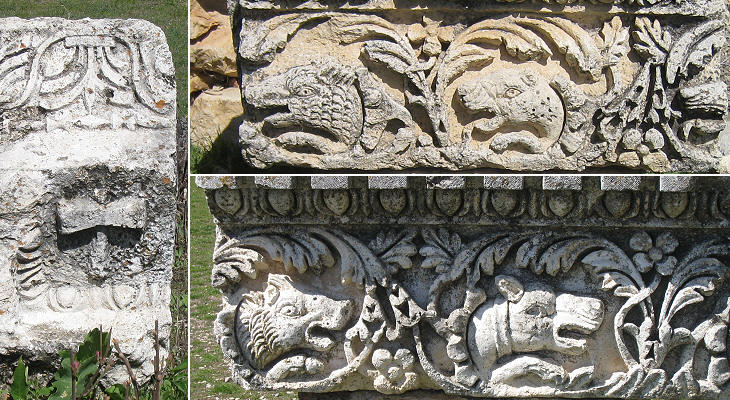 Details of the decoration of the temples: (left) a "labrys"; (right) "inhabited" scrolls 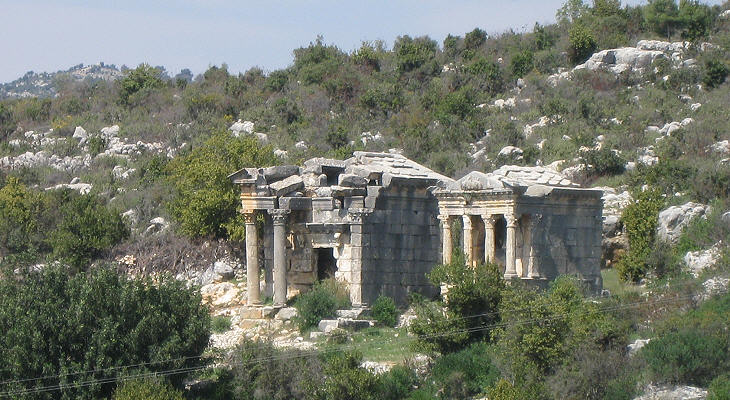 Twin mausolea seen from the road to Silifke

Midway between Uzuncaburç and Silifke, the village of Demircili retains some Roman mausolea of the IInd or IIIrd century AD. They were built outside the town of Imbriogon, the scanty ruins of which are barely visible in the fields to the west of the road.
The mausolea were built on commanding locations and therefore have always been very visible, yet unlike the town, they are almost intact as if they were protected by a sort of awe. 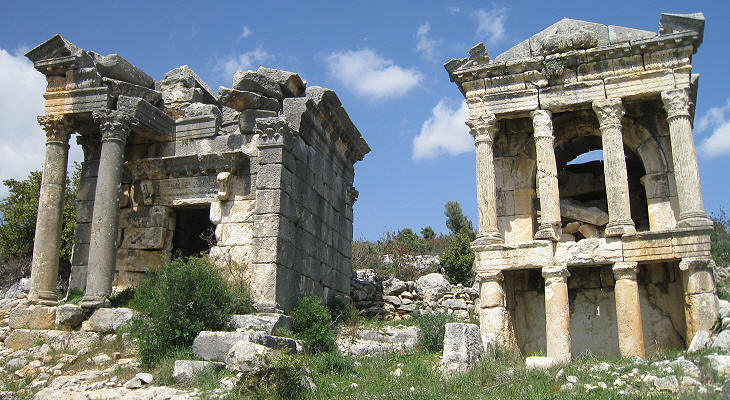 The overall design of the mausolea with columns and a standard entablature still produces the effect of small temples. In Lycia several towns had rock-cut tombs having the shape of temples, e.g. at Telmessos and Kaunos. 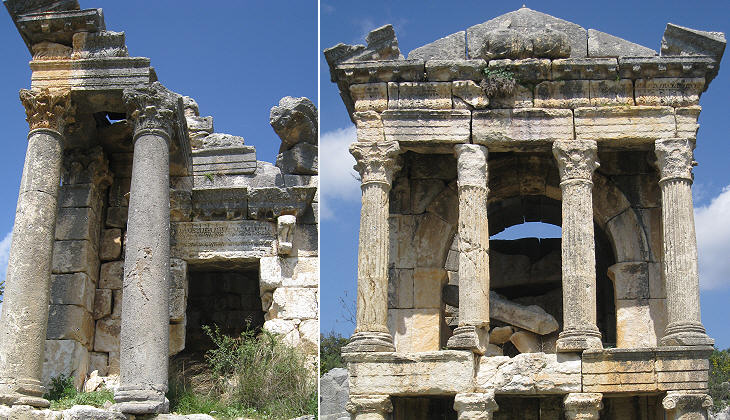 Details of the two mausolea

The small size of the door in one mausoleum and the remaining part of a relief showing a couple in the other one indicate the actual purpose of the two buildings.

Northern mausoleum and behind it a tomb cut into the rock

The lower storey of the mausolea was the actual burial chamber which housed the sarcophagi of the deceased, whereas the upper storey was used for funerary rites and anniversaries, similar to what can be noticed in many tombs along Via Appia. 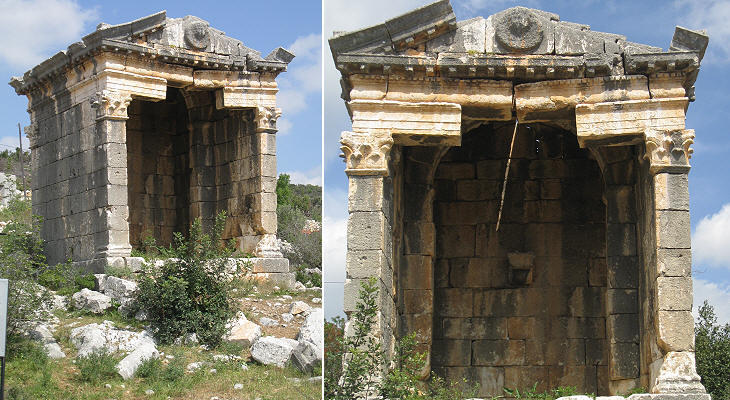 One of the reasons which has helped the mausolea to withstand the injuries of time and even retain their roofs is the presence of arches which strengthen the internal structure of the buildings.

Southern mausoleum and view towards the Mediterranean Sea