Anamour castle (..) stands on the edge of the sea, about six miles to the eastward of the cape; and in its general appearance, strongly resembled some of the antient castles of Great Britain.
Francis Beaufort, Captain of HMS Frederikssteen, a frigate of 32 guns: Karamania; or a brief description of the South Coast of Asia Minor, and of the Remains of Antiquity collected during a survey of that coast, under the orders of the Lords Commissioners of the Admiralty, in the years 1811 & 1812 - Published in 1817

Cape Anamur is the southernmost point of the Anatolian peninsula; on a fair day it is possible to see Cyprus from this cape and to control the passage of all ships sailing between Pamphylia (the region of today's Antalya) and Cilicia. A few miles to the east of the cape, the Romans built a small castle on a rock projecting into the sea; the castle was enlarged by the Crusaders and later on, at the beginning of the XIIIth century, it was entirely rebuilt by the Karamanid Emir of Laranda (today's Karaman). It was strengthened by the Ottomans, who added a fine tower on its eastern side. 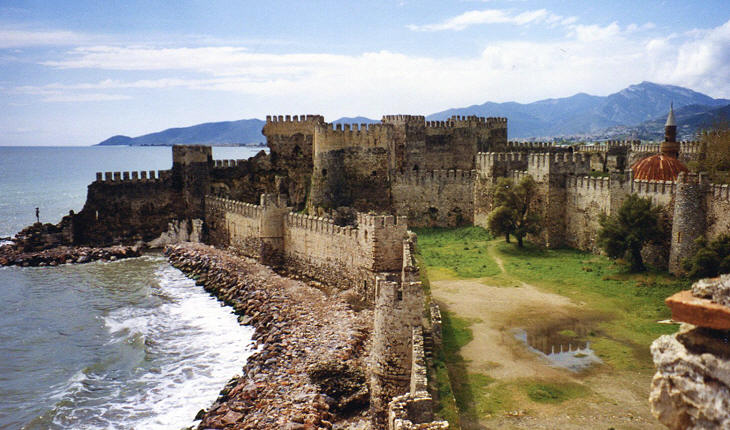 View from the great eastern tower

Its keep or citadel, is placed on a small rocky eminence, and commands two open courts which are surrounded by a chain of towers of all shapes - dodecagonal, octagonal, square, triangular, round, and half round. The extreme dimensions are about 800 by 300 feet; the walls and towers are every where embattled; and in some parts of the ramparts, apertures have been made for cannon, but probably at a period long after their original construction. Beaufort
Walls inside the fortress divided it into three parts, in order to allow further resistance in case the enemy had gained access to its interior. 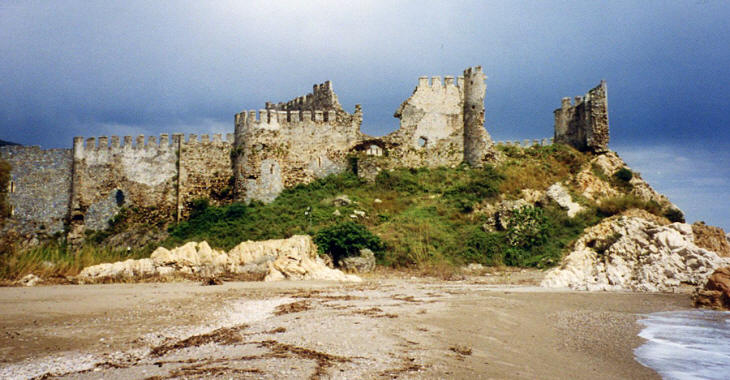 Anamour castle, though in a very ruinous state, has a resident Agha, who, contrary to the usual custom of the Turks, suffered us to examine it at leisure. (..) There are three arched gateways, the principal of which through a square tower on the western side. Over this gate there is a tablet encompassed by fillets of alternate black and white stone; they finish in a flat pointed arch and contain a long Arabic inscription. Beaufort
The view from the western side shows the rock upon which the fortress was built initially, but the castle is in a more ruinous state than it was when Beaufort visited it. 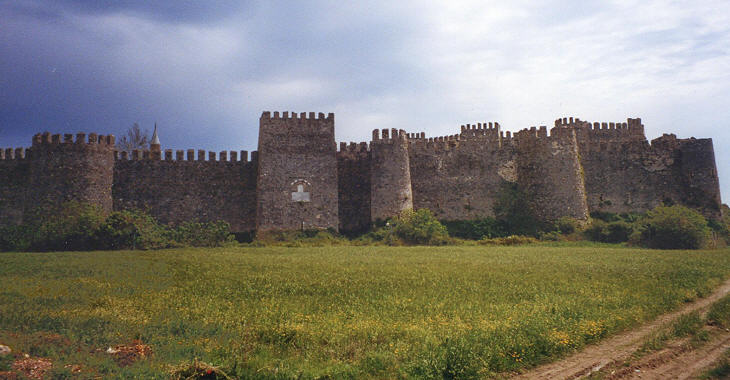 The Bey of the district informed us that Anamour is the vernacular name; but that at Constantinople, and in the public fermans it is called Memoriyeh; and he wrote both these names for us. (..) Farther to the eastward we visited a ruined fortress on a rising ground called by the natives Softa Kallassy; (..) and it seems to have been constructed about the same period as Anamour Castle. Beaufort
A deep moat completed the fortifications of the fortress. The Emir of Laranda put the following inscription above one entrance to the castle: I brought the water, I rebuilt the castle (also in the image used as background for this page). 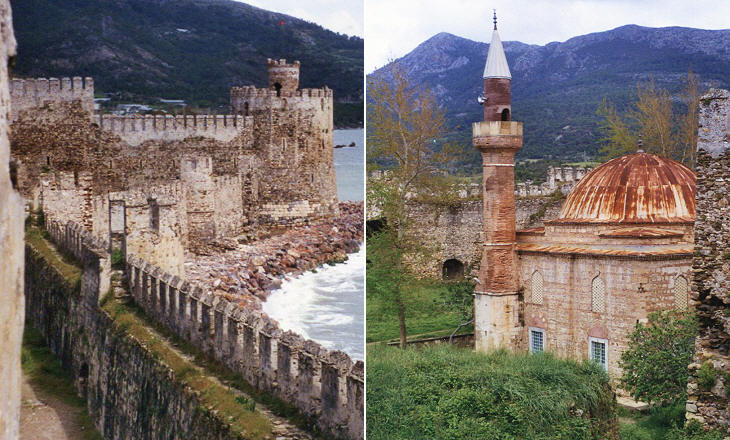 The fortress housed a small town with fountains, mosques and hammams.