The greater part of this day was spent in walking about the town, and visiting the castle and the bazaars. From the circumstance of each house being surrounded by a large garden, the place appears to be more extensive than it really is.
William Hamilton - Researches in Asia Minor, Pontus and Armenia - 1842
According to a traditional account Alaeddin Kayqubad, Sultan of Konya assigned Karaman (which was then known as Laranda, its Greek name) to the Karamanogullari, a clan coming from Azerbaijan. This account is most likely a tale invented at a later stage by the rulers of Karaman to support their dynastic claims. Over time Laranda became known as Karaman and this name was used also by the Greeks. 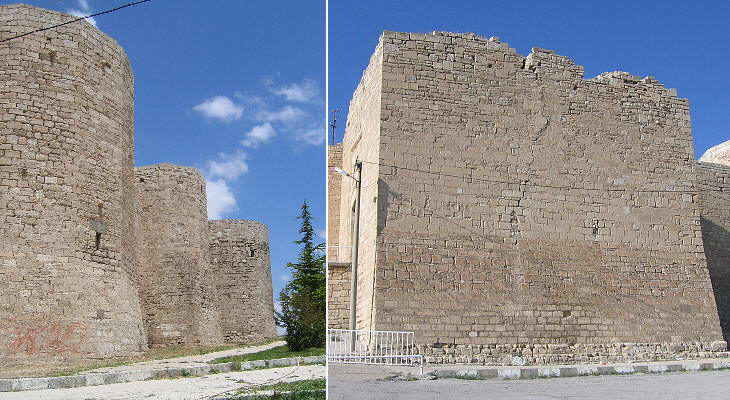 The invasion of Anatolia by the Mongols in the XIIIth century and by Timur (Tamerlane) at the beginning of the XVth century were positive events for the Karamanids (the dynasty who ruled Karaman). The first invasion undermined the power of the Sultans of Konya, the second one weakened that of the Ottomans who had established a powerful state in western Anatolia and in the Balkans.
The whole of the district along the sea-coast was for a long period known by the name of Caramania, an appellation now in disuse. Hamilton
The Karamanids controlled the Mediterranean coast from Antalya to Silifke and they built a strong fortress at Cape Anamur (Mamure Kalesi). (left) Entrance to the Ottoman fortress; (right) reliefs of the (previous) Karamanid fortress

Its Turkish castle consists of a square keep with several round and square towers, surrounded at a little distance by an outer wall, within which above a hundred small houses have been erected. In these walls several Arabic or Turkish inscriptions have been inserted, which appear to come from other buildings, and many of which are so low that the whole of the present wall must have been raised after the earlier Turkish constructions were already falling to decay. Hamilton
In 1468 Ottoman Sultan Mehmet II (the conqueror of Constantinople) waged war on the Karamanids and defeated them: their fortress at Karaman was destroyed. It was rebuilt later on by the Ottomans. The reconstruction made use of material from the previous fortress; here and there the walls show reliefs and inscriptions which decorated it. 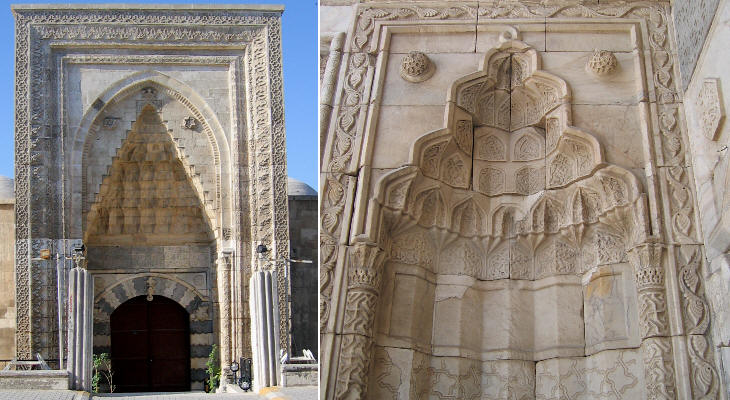 Nafise Sultan Medrese: (left) portal; (right) one of its two side niches

In the town were several ruined mosques of graceful Saracenic style, one of which was particularly striking. The entrance is of marble, handsomely ornamented with arabesques. Hamilton
The fight for supremacy in Anatolia between the Ottomans and the Karamanids often led to open warfare; the peace agreements which settled the disputes were usually strengthened by the establishment of family bonds. For this reason the Ottoman Sultan Murad I gave his daughter Nafise's hand in marriage to Alaeddin Bey of Karaman. The bride usually brought a very rich dowry. In 1382 a medrese was dedicated to Nafise in Karaman. The building follows the traditional plan of an arcaded courtyard with an iwan (niche) at each end. The monumental stone portal (pishtaq) projects from the wall. 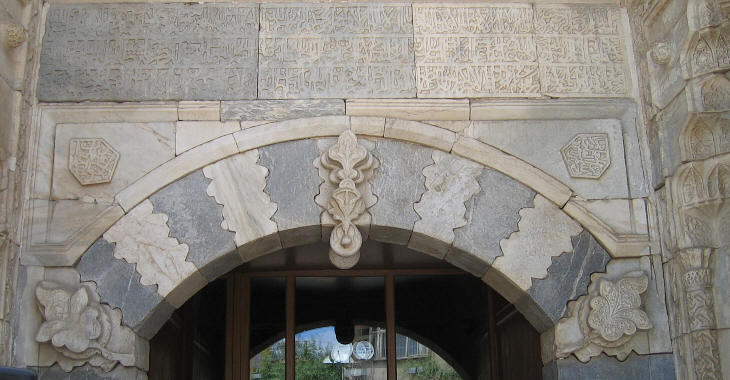 Large pishtaq are typical of Islamic architecture in Anatolia where the decoration is based on reliefs (e.g. at Kayseri and Divrigi), and Persia and Central Asia where tiles were employed (e.g. at Tabriz and Samarkand).
The image used as background for this page shows a detail of the decoration of a small portal inside the medrese. 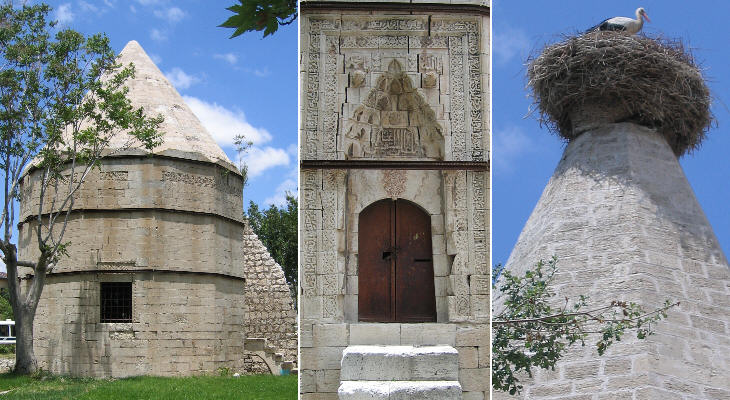 Alaeddin Bey was buried in a turbe located a few yards from his wife's medrese. The mausoleum has the pyramidal roof which characterizes this type of Seljuk monuments. A turbe with such a roof is called kumbet. They can be found in all the towns which belonged to the Sultanate of Rum and in particular at Kayseri. When the roofs are not excessively pointed, storks choose them for their nests (they have a penchant for ancient, e.g. at Ephesus, and Islamic, e.g. at Diyarbakir, monuments). 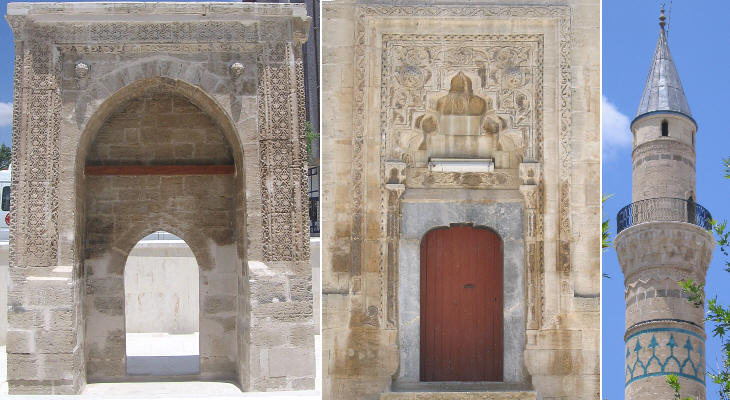 Ibrahim Bey II ruled Karaman from 1424 to 1464. In 1443-1444, when Sultan Murad II was fighting against a Christian alliance in Bulgaria, he attacked the Ottomans in Anatolia and seized Ankara. He then had to face Ottoman vengeance and he was forced to accept a humiliating peace. The complex he built in 1433 is one of the last monuments of the Karamanid period. 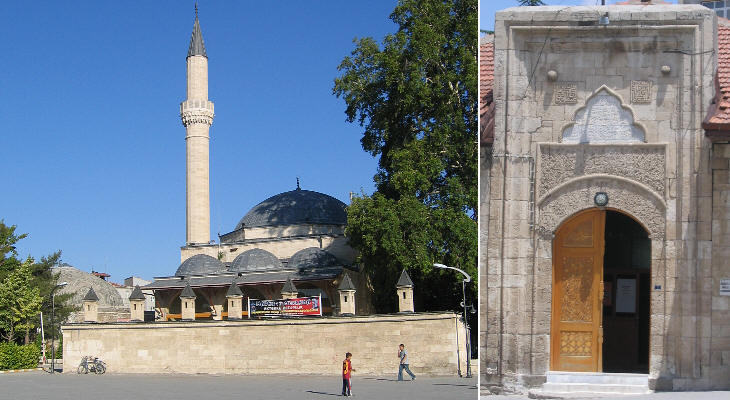 Mevlana Jalal-ad-Din Muhammad Rumi, the founder of the Mevlevi Order, known as the Whirling Dervishes, spent his youth in Karaman. His mother died in this town and her tomb was moved in 1370 to a mosque near a tekke, the building where the members of the Dervish brotherhood gathered for spiritual retreat.
After the establishment of the Republic of Turkey in the 1920s, many religious buildings were confiscated and used for other purposes. The small mosque built in 1356 by Seyfeddin Hacibeyler is now a public library.

Muhammad Rumi wrote all his works (which include many poems) in Persian, not just because his family came from that country, but also because Persian was the literary language used in Anatolia.
In 1277 Karaman Mehmet Bey decreed that Turkish was the official language and that it should be used in all circumstances. Yunus Emre is one of the first poets who composed works in the spoken Turkish of his time (ca. 1238-1320) and for this reason he is regarded as one of the founders of Turkish Literature. The decree by Mehmet Bey did not eradicate Persian from Turkey and not even from its own state. This actually occurred in 1928 when the Latin alphabet replaced the Arabic-based Ottoman Turkish alphabet. Many words of Persian or Arabic origin were removed from the language, while others were borrowed from French (plaj - plage - beach), Italian (lokanta - locanda - inn/small restaurant) and German (otoban - autobahn - highway).
It is thought that Yunus Emre was buried in a Dervish complex built in the XIVth century.

After the Ottoman conquest Karaman lost most of its importance and it became a minor provincial town. So there are not many buildings of the Ottoman period. Yeni Minare Camii was built in 1522 by the local governor. Karaman retains several old hammams, many of which are still being used. 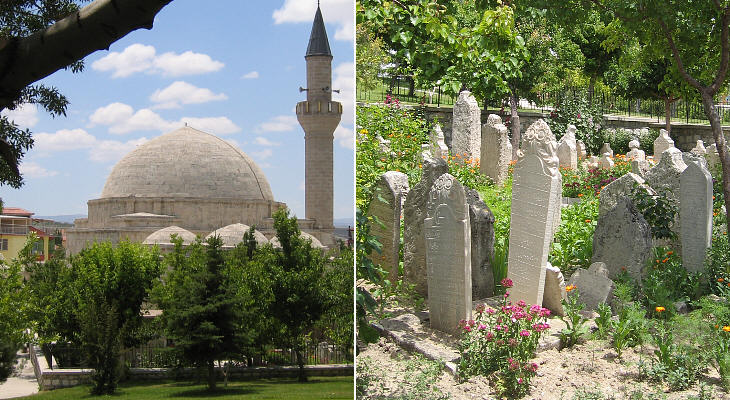 Hisar Camii and its graveyard

Hisar (Castle) Camii is another small mosque built in the Ottoman period (1547). It retains a well kept old graveyard.

Karaman gives its name to the Karamanlides, people living in its region who spoke Turkish and were Greek Orthodox. Their ethnic origin is uncertain: however they were regarded as Greeks in 1923 when Turkey and Greece agreed on an exchange of population. It was based on religious background, rather than spoken language. The church shown above was turned into a mosque; now it is deconsecrated and used for temporary exhibitions. 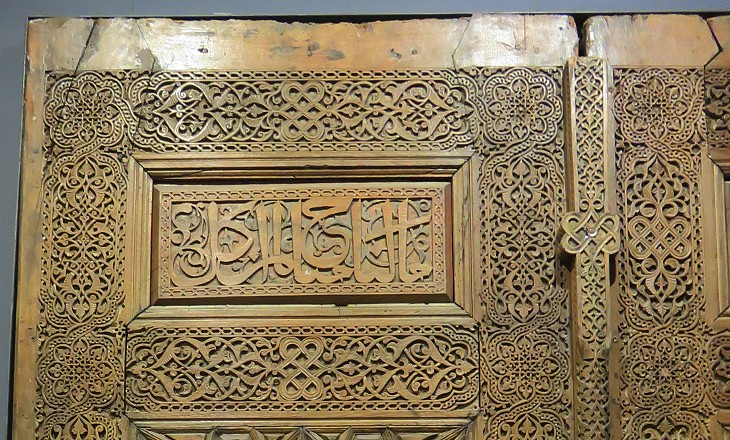 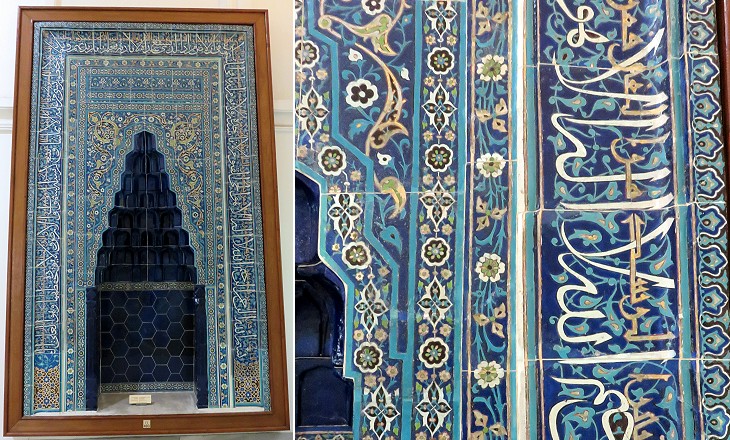