Sunday, July 16 (1836) The Turcomans of this district, like their Cappadocian predecessors of old, are great breeders of horses, which, of course, they sell as soon as possible to other parts of the country, keeping the mares only at home; these they ride, but never use as beasts of burthen. (..) Those I saw were neat, though small, and generally active, and were followed by their young foals. (..) A field of black and scoriaceous lava extends from the village several miles to the E. and S.E., in which direction are two conical hills with craters: (..) having reached the plateau, I found myself on a field of lava, the upper part very scoriaceous, over which for nearly two miles a rough road has been made with great difficulty, winding round and between the numerous rugged masses which cover the surface. A wilder or more desolate scene cannot well be imagined; it was as bare as the most recent lava coulee on Vesuvius. At twelve the country became smoother, the crevices being filled up with sand and ashes near the foci of eruption, which appeared to be two conical hills of scoriie and ashes, between which the road passed: we descended on the eastern side into a plain of pumiceous tuff, probably of the trachytic age.
William Hamilton - Researches in Asia Minor, Pontus and Armenia - 1842
Cappadocia is a historical region of the Anatolian tableland which owes its name to the Persians. They were impressed by the number of horses they found in this region and thus called it Katpatuka, the land of beautiful horses.
The boundaries of the region are marked by two extinct volcanoes: Mount Hasan (Hasan Dagi) near Nigde and Mount Argaeus (Erciyes Dagi) near Kayseri. Between 9 and 3 million years ago these volcanoes erupted spewing enormous amounts of ashes and lapilli. These covered the ground and over time they solidified into tuff. Lava, which accompanied these ash eruptions, by its rapid cooling, formed blocks of basalt. While tuff is porous and subject to erosion, basalt is more resistant to the action of water and wind.
This geological background explains the two main attractions of Cappadocia: a) the rocks turned into pillars, cones, obelisks and other extraordinary shapes by natural erosion; b) the tuffs carved out by man to form houses, churches and monasteries. 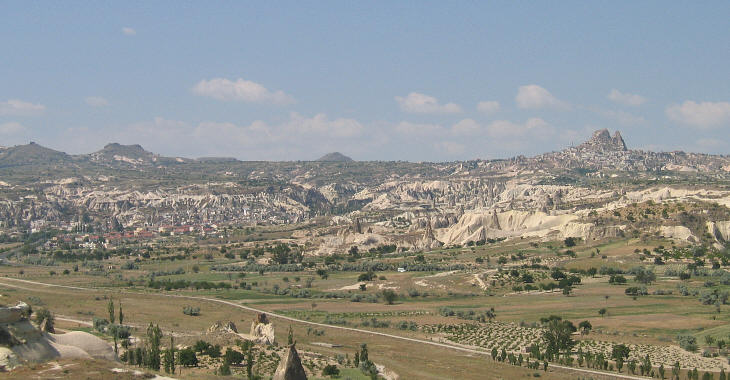 The valley of Goreme (left) and Uchisar (right) seen from Cavusin

We were situated on the extreme edge of the table-land, with a deep valley beyond. On arriving at this edge I witnessed a most curious and extraordinary sight: in the several valleys spread out beneath our feet, towards the E. and N.E., many thousand conical hills, or rather pointed pinnacles, varying in height from 50 to 200 feet. Hamilton
The valley of Goreme, at the northern limit of Cappadocia, combines some of the most impressive naturally eroded rocks with carved out buildings of Turkey. 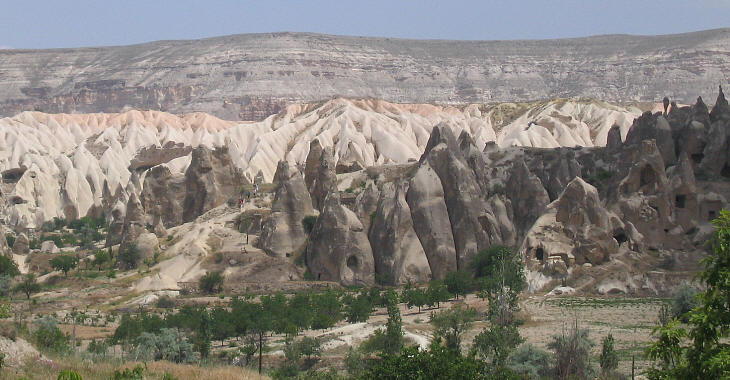 They rose up in all directions, so closely arranged that their bases touched each other, leaving only a narrow path between them, and presenting a most strange and inexplicable phenomenon. In many places they were so slender and close together, that they resembled a forest of cedars, or lofty fir-trees. (..) The peculiar nature of the several beds of which the tuff consists has of course had some influence in modifying their subsequent forms. In the upper portion are several bands of hard stone, which have preserved the horizontality of the table-lands; the middle beds, some ofwhich are slightly tinged with red, are worn by weathering and running streams into these pointed cones, while the lower beds are still softer, and wear away with a more rounded form. Hamilton
The phases of the erosion process can be seen at Goreme: in the first stage the rocks lose the superficial layer of ground; this uncovers the tuff which has a pink or white colour; these colours, combined with the initial smooth shapes caused by the erosion, create the impression of a semi-solid cream. In a second phase the rocks which are more resistant to erosion become isolated and their colour becomes dark. You may wish to see Kandovan, a village in Iranian Azerbaijan, with similar rocks.

Goreme: overall view of the village

But, much as I had been struck with the appearance of this valley at a distance, I was still more surprised at finding that almost every one of the conical hills was excavated inside; in most cases this had been done in very ancient times. Hamilton
The villagers of Goreme carved their dwellings, warehouses and stables out of the rocks. Today a number of modern buildings provide the facilities required by modern life and by the increasing number of tourists who visit the site. Turkish authorities have forbidden the construction of large hotels: these are placed on the tableland and do not spoil the view. 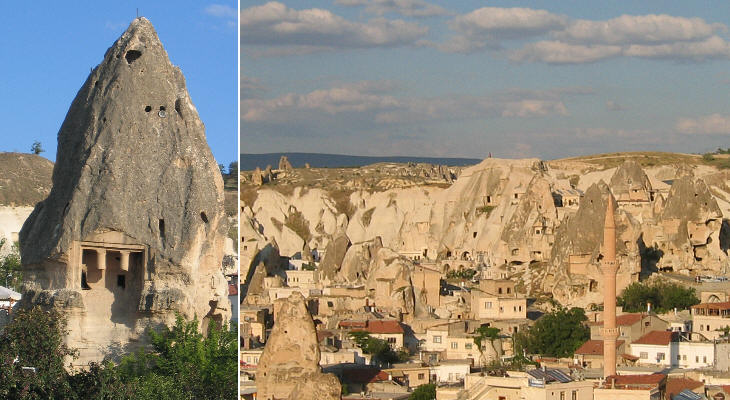 Goreme: (left) Roman Tomb; (right) view of the town's centre; the image used as background for this page shows some pinnacles in the town

Some, which were most elaborately worked, appeared to be tombs. I entered one, which had an arched or rounded doorway leading into a small vestibule; this communicated with a larger apartment, the floor of which was cut into graves, long since opened. Another was excavated so as to represent the portico of a Doric temple. Hamilton
There is no evidence suggesting that Goreme was a sizeable village in antiquity; the rock-cut, Lycian style tomb shown above (not the only one) is probably due to the inhabitants of nearby Avanos who used Goreme as a necropolis. 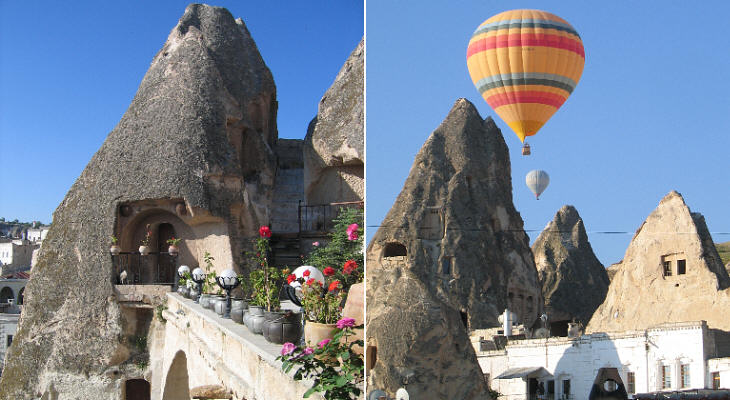 Individual tourists can experience sleeping in a rock-cut room (having all modern comforts). They may also have a view of Goreme from balloons, although they may prefer to take pictures of them from the terrace of their hotel. Rooms do not need air-conditioning because the caves prove relatively warm and easy to heat during the cold Anatolian winters, and pleasantly cool during the hot summer months. 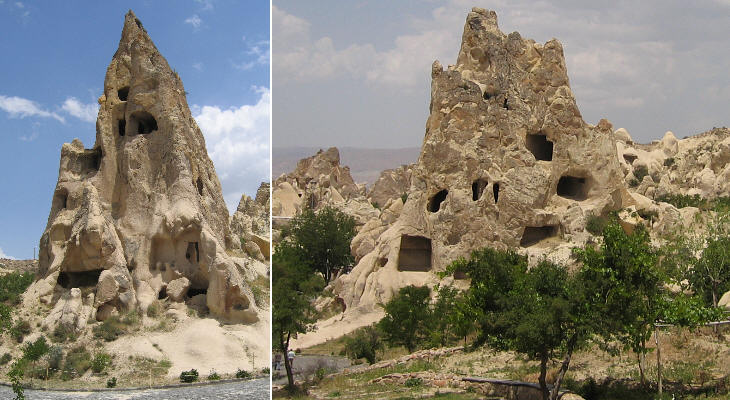 Crossing the valley, we observed a village, built amongst these conical hills, the caves of which served as dwellings; in other places the grottoes are excavated in the steep sides of the cliffs, or extend from the conical hills into the ground beyond; in short, no description can convey a sufficient idea of the variety and novel appearance of this extraordinary tract of country. Hamilton
A striking aspect of the rock-cut houses of Goreme is that the inhabitants did not limit themselves to obtaining a certain number of rooms, but they actually emptied the whole rock with inner staircases connecting the various "apartments". This means that the villagers acquired a practical experience in determining whether the rock would collapse or not. You may wish to see another rock-cut village at Eski Gumus. 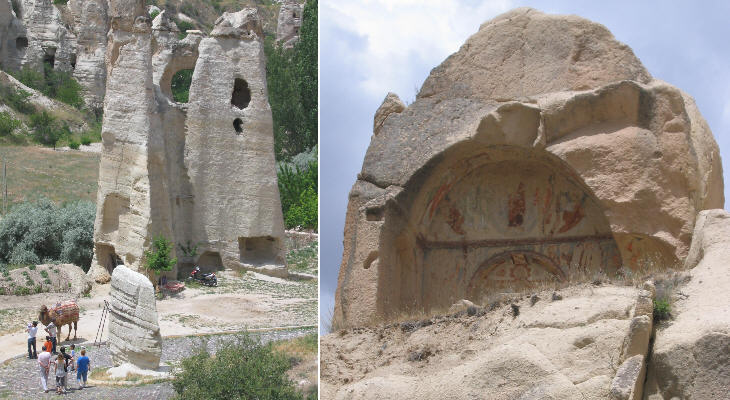 The most difficult questions connected with those places are to ascertain the uses for which they were intended, and the people by whom they were made. Some appeared to have been intended for tombs, while others must have been dwelling-places; others, again, from the paintings with which they are adorned, have evidently served as chapels. In the present day many are used as dovecotes, and we saw pigeons flying out of the upper openings, to which there appeared to be no external means of approach; though even these were decorated with red paint, and many Greek letters were inscribed on the outer surface of the rock, round the openings. Hamilton
Monks and nuns established themselves in a site near Goreme where the erosion process was in its initial phase; cells, stables, utility rooms and many churches were cut into the rock; the churches were decorated with frescoes in a period which ranges from the late VIIIth century to the XIth century. After a long period of abandonment these monuments have become part of the Goreme Open Air Museum. Visitors are not allowed to take pictures using flash.

In a smaller valley to the S.E. was one pinnacle containing several apartments, the walls of which were covered with fresco paintings of Greek saints, in very old style, but not sufficiently well preserved to indicate their date or subjects. Hamilton
Over the centuries the rock has collapsed in several places, thus uncovering the inner structure of churches and monasteries. Although the spaces were the result of digging, yet they were shaped and decorated similar to ordinary buildings with pillars, columns and vaults.

Usually the entrance to the churches was very small; this was not due to the desire to hide the church, but it was aimed at minimizing the exchange of air and retain a moderate temperature; ventilation shafts reaching the upper surface of the rock ensured that the smoke of fire and candles did not have intoxicating effects.
In other parts of Cappadocia the inhabitants of some villages dug underground nets of rooms and stables; in this case the predominant reason was security and they did not care about decorating the ants' nests where they sought refuge.

A couple of churches were dug into isolated rocks. The entrance of the church shown above let in enough light to take a picture of its frescoes. One can see the effect of the many pebbles which were thrown at them, particularly at the faces of the saints, similar to what can be noticed in churches of Qara in Syria.