The extensive city of Sivas is built on one of the affluents of the Kizil-Irmak, nearly in the centre of an extensive plain which stretches N.N.E. and W.S.W. Sivas, which was once called Cabira, and afterwards Sebasteia occupies the centre of the district, and likewise of ancient Cappadocia.
The Expedition For The Survey Of The Rivers Euphrates And Tigris in the years 1835, 1836, and 1837, by Chesney, Lieut.-colonel. 1850
Kayseri owes its name to Julius Caesar; Sivas to Augustus; the town was founded by the Hittites, but it was renamed Sebasteia in honour of the Roman emperor. Augustus was not a name but a Latin adjective meaning very admirable/noble; its Greek translation was sebastos, so Sebasteia meant Augusta (see an inscription on a temple in the Acropolis of Athens). Notwithstanding its name Sivas does not retain Roman memories. The town is located at the eastern limit of the Anatolian plateau, in an area which was often included in the Kingdom of Armenia, a buffer state between the Roman and the Persian Empires. 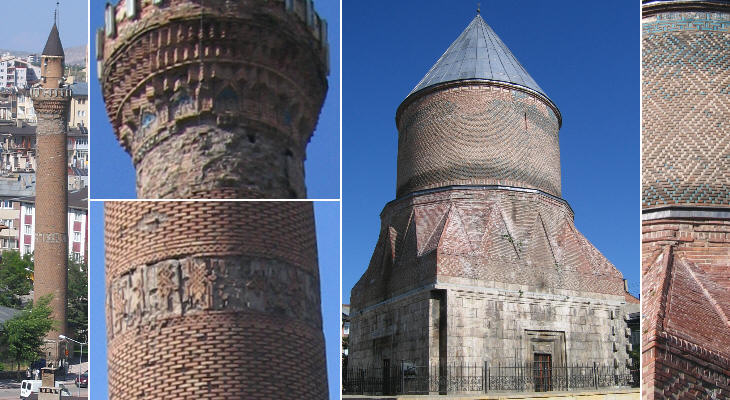 Sivas is a large town containing a population of 16,000 souls, of whom 4000 are Christians. It is the seat' of a pasha, very centrally situated. The city is not very healthy, being low, and the streets narrow and dirty. (..) The old walls of the city no longer exist. (..) There is a want of wood in the environs which adds to the naked aspect of the town, but there are some gaudy Mohammedan tombs in the neighbourhood, and also a large Christian monastery to celebrate the well-known martyrdom of the Forty of Sivas.
William F. Ainsworth - Travels and Researches in Asia Minor, Mesopotamia, Chaldea, and Armenia - 1842
The Byzantines strengthened the fortifications of Sivas, yet the town was sacked by the Persians in 575 and by the Arabs in 712. After the Byzantine defeat at Manzikert in 1071 Sivas became an autonomous Seljuk beylik, a small local principality. Eventually it fell under the authority of the Sultans of Konya. The tall minaret of Ulu Cami (Great Mosque) was built by Sultan Kaykaus I. It has a decoration of blue faience tiles, which is a characteristic of many other monuments of Sivas.
This decoration can be seen also in Guduk Minaret, a large kumbet (mausoleum) having the shape of a truncated minaret.

Sultan Kaykaus I founded a large darussifah (hospital), which included a medical school. The complex was turned into a medrese (theological school) in 1768 and its current name (hospital medrese) makes reference to its former use. The portal was decorated with two statues of lions, a symbol of the Seljuk sultans. Kaykaus I chose to be buried in Sivas in a mausoleum inside the darussifah.
The photos of Sivas were taken in June 2008 when the restoration of Sifahiye Medresesi was being started; at that time that of Gok Medrese (see final part of this page) was almost completed. This allows an assessment of benefits and drawbacks of extensive restorations. 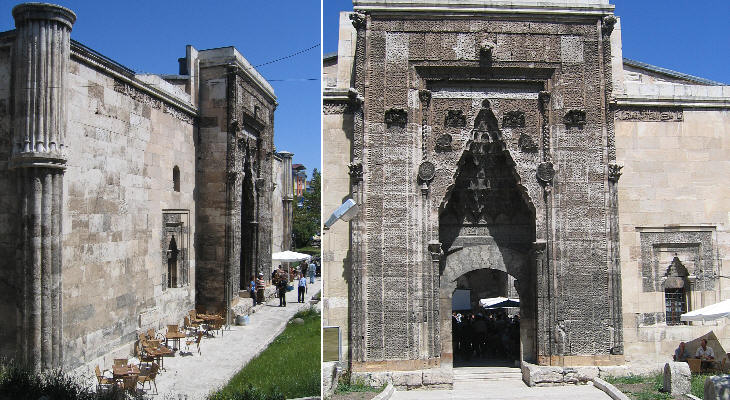 In 1242 the Mongols attacked the Sultanate of Konya and on June 26, 1243 they defeated the Seljuks at the battle of Kose Dag, a mountain in eastern Anatolia. As a consequence Sivas became part of the Mongol feudal system. However the Sultans of Konya maintained a formal suzerainty over the town. This may explain why in the same year 1271 three medrese were built: two (Buruciye and Gok Medrese) by high officers appointed by Sultan Kaykhusraw III (the nominal ruler) and one (Cifte Minare Medresesi) by a vizier appointed by Abaqa Khan, the second Mongol ruler of the Ilkhanate. The three medrese are characterized by a large pishtaq, a portal projecting from the facade with an elaborate relief decoration.

Muzafer Buruciye Medresesi was a school where students learnt more than just theology. An inscription on the portal says that "To demand an education in science is an obligation for every Muslim". The decoration of the portal is based on a mixture of calligraphy and floral motifs. The Arabic script used in this medrese is known as sulus: it allows a great variety of forms and therefore of decorative compositions; for this reason it is also known as ummu'l hat (mother of writing).

The courtyard of the medrese was built making use of columns and capitals taken from ancient temples or churches, almost the only remaining evidence of the Roman-Byzantine past of Sivas. 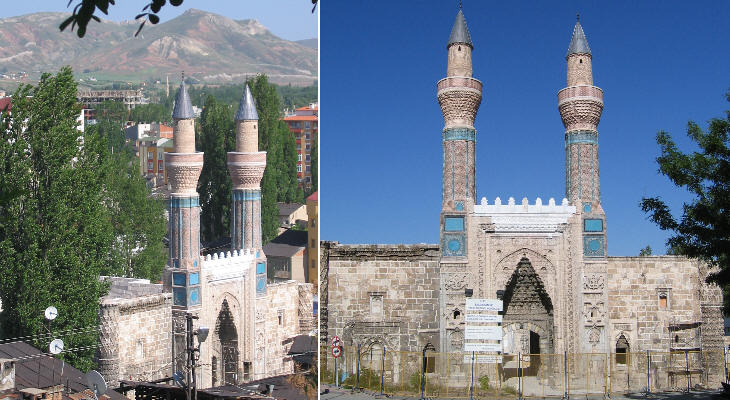 The houses are intermingled with gardens, baths, khans, medresses, and mosques. Of the last there are nearly one hundred, which, being in the best style of Arabian or Persian architecture, are striking edifices; their minarets and entrances are particularly elegant. Chesney
Gok Medrese means blue medrese and the name is due to the colour of its decoration. This medrese is the symbol of Sivas and one of the best known examples of Seljuk architecture: from a small inscription in the portal we know that it was designed by an architect who came from Konya. Gok Medrese: (left) minarets; (right) detail of the portal which is very similar to one at Amasya

Immediately after having been restored all works of art appear "too new". That applies to the Gok Medrese minarets too. Usually in a few years this excess of newness goes away and the evocativeness of the monument will be back.
Astronomy was taught in this medrese and two reliefs in the portal show the zodiacal symbols. There are some similarities with the Chinese symbols, with animals replacing some of the traditional zodiacal signs (you may notice an elephant's head - first on the left).
The image used as background for this page shows a detail of Gok Medrese.

Move to page two or to:
Introductory page
Konya
Karaman
Mut and Alahan
On the Way to Nigde
Nigde
Kayseri
Cappadocia
Divrigi