If you came to this page directly, you might wish to read a page with an introduction to this section or a page covering the Walls of Acre first. 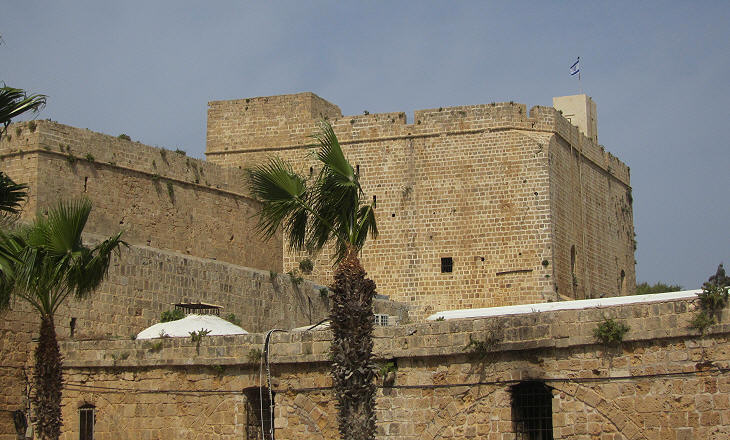 In six hundred thirty six, it was taken by the Saracens: In eleven hundred and four, the Christians became masters of it under Baldwin the first, king of Jerusalem, by the assistance of the Genoese galleys. In eleven hundred eighty seven, Saladin, sultan of Egypt, got possession of it; and in eleven hundred ninety one, Philip, king of France, and Richard, king of England, retook it; but in twelve hundred ninety one, the Saracens assaulted and destroyed the city, that is to say, the fortifications, which they afterwards repaired: It was taken from them by the Turks in one thousand five hundred and seventeen.
Richard Pococke - A Description of the East and Some Other Countries - 1745
Acre is mentioned in ancient Egyptian and Syrian chronicles. In the IIIrd century BC it was renamed Ptolemais after the name of the Greek dynasty ruling Egypt, but of the ancient Ptolemais there are now no remains noted William Turner in 1817 in his Journal of a Tour in the Levant. The town is mainly known for its role during the Crusader period. It was conquered by Baldwin, King of Jerusalem, in 1104, five years after the establishment of that kingdom. Baldwin was helped in his enterprise by fleets from Genoa and Pisa and thanks to merchants from these towns Acre became a key trading port in the Levant. 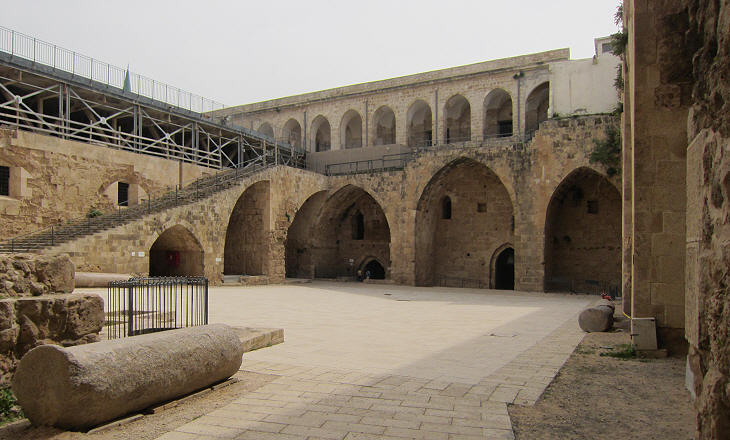 The main courtyard of the Citadel

In 1110 the Knights of St. John, a military order originated from a brotherhood founded at Jerusalem by Amalfi merchants and named after St. John the Baptist, opened their first hostel/hospital at Acre. Because of their activity in favour of the pilgrims, the Knights of St. John were also known as the Hospitallers. The military aspect of the order acquired greater importance towards the end of the XIIth century, when the Muslim threat on the Crusader States increased. They were entrusted with the defence of key fortresses such as Krak des Chevaliers and Marqab in Syria. (left) Refectory of the Knights; (right) fleur-de-lys, most likely sculptured for King Louis IX of France

To the north and north east of the city and of the port, was the quarter of the knights, and the religious orders, extending about three quarters of a mile from east to west, and might be half a quarter of a mile broad. At the west end of it, there are ruins of a great building which, they say, was the palace of the grand master of the knights of saint John, who retired to this place after they lost Jerusalem; it was repaired and inhabited by the great Feckerdine (Fakhr-al-Din II 1572-1635), prince of the Druses. At the end of this building, are the remains of what seem to have been a very grand saloon, and a smaller room of the same architecture at the end of that. Pococke
Today's citadel is mainly the result of Ottoman additions and changes made during the British Mandate of Palestine, but some underground halls belong to the Crusader fortress. Acre was seized by Saladin in 1187, but King Richard I the Lionheart conquered it back in 1191 during the Third Crusade. German Emperor Frederick II landed at Acre to lead the Sixth Crusade in 1228 and French King Louis IX, after his failed attempt to conquer Egypt during the Seventh Crusade, reached Acre in 1250 where he promoted the strengthening of its fortifications. 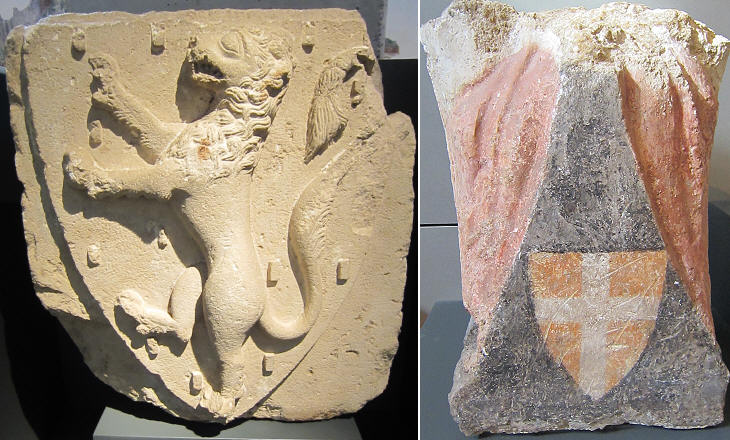 Museum of Israel at Jerusalem: from Acre: (left) relief depicting a rampant lion, heraldic symbol of the Lusignan kings of Jerusalem and of Cyprus; (right) fresco bearing the cross of the Order of St. John

In 1192 Acre became the capital of the remaining part of the Kingdom of Jerusalem, which from a financial viewpoint was largely in the hands of Pisa, Genoa and Venice. Wars among these cities had consequences at Acre and in 1254-1267 a series of conflicts between Venetians and Pisans on one side and Genoese on the other led to the destruction of the Genoese quarter. In 1258 the Venetians relocated two decorated Byzantine pillars from a church of Acre to St. Mark's Square.
Nicolò Polo, a Venetian merchant and the father of Marco, the author of a well known book of travel accounts in the Far East, resided at Acre for two years at the end of a journey during which he visited Bukhara and today's Beijing.
Conflicts between Genoese and Venetian merchants lasted until the very final days of Christian Acre which was conquered by the Mamelukes in May 1291. The Hospitallers escaped to Cyprus, but a few years later they conquered Rhodes, which they lost in 1522. In 1530 they were granted possession of Malta by Holy Roman Emperor Charles V who was also King of Sicily. 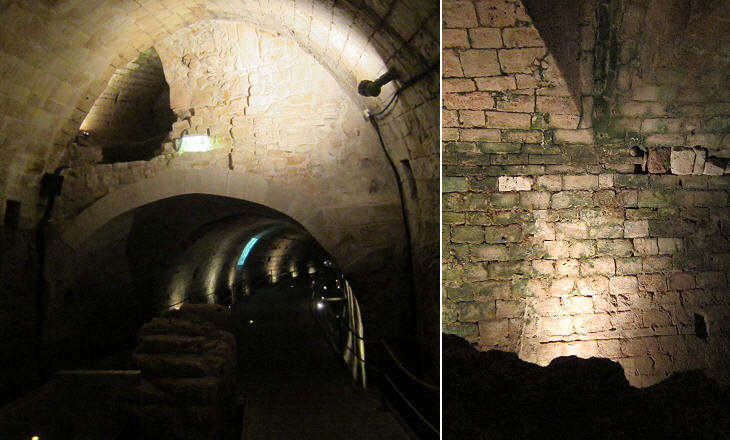 Some works of the Knights of St. John yet remain and to them may be attributed numbers of massy arches supporting arches under which run streets. Turner.
The buildings and streets of today's Acre lie above those of the medieval town. A passageway built by the Knights Templars, another military order, between their headquarters in Acre and the harbour provides an opportunity to see the underground town. 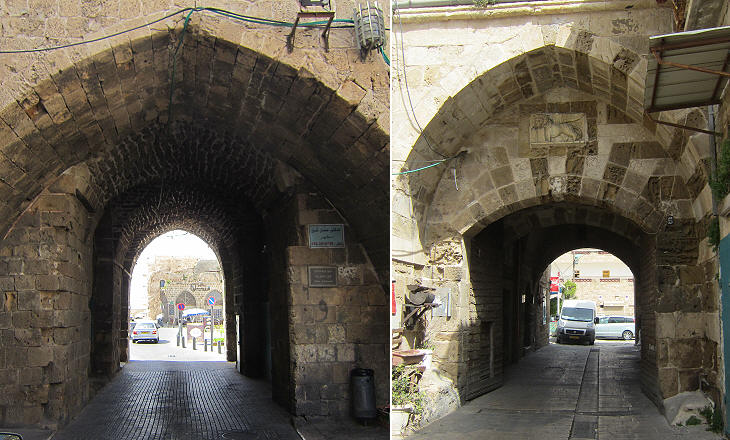 left) Khan es-Shawarda; (right) Khan el-Faranji with a modern relief depicting the Winged Lion of Venice because it stands upon the ancient Venetian quarter

The Latin fathers of the Holy Sepulchre have apartments, and a chapel in a Kane, which serves as a convent; and all the Europeans live in the Kane, except the English consul. The trade here, for the most part, consists in an export of corn for Europe, and of cotton for Egypt, and other places. Pococke
After being seized by the Mamelukes, Acre lost its relevance as a trading port and it rapidly declined. It regained importance in the early XVIIth century when it was included in the territories of Druze Emir Fakhr ad-Din II, who ruled parts of Lebanon. A number of khans (inns for merchants) were built in the XVIIIth century and in one of these Turner found accommodation during his stay at Acre: A Turk directed me to the house of Signor Pasqualigo Malagamba our vice consul (..), an Italian whom I found lodged in a khan, there being few houses in the city that do not belong to the Pasha. (..) In this khan Signor M. has six or seven tolerable apartments for which he pays rent to the Pasha and of these he has put me into a very comfortable one. 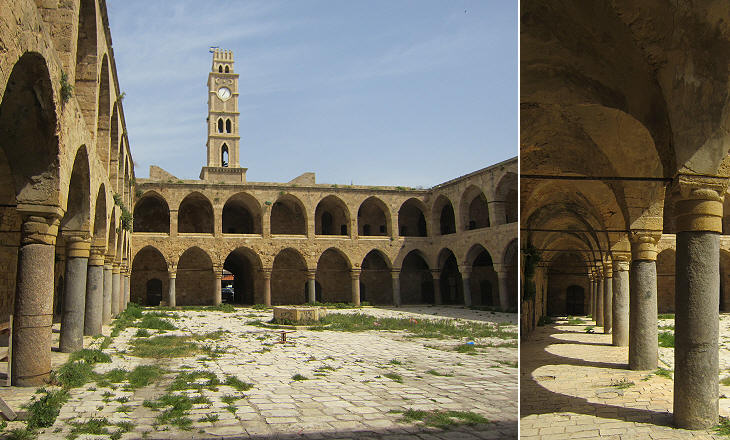 Towards the east end of the town was the house of the knights; Between this and the palace of the grand master, there was a very large and magnificent nunnery: Some of the lofty walls of the convent are standing. Pococke
Khan el-Umdan was built in 1785 on the site of a Dominican convent. It is unlikely Turner lived here, because otherwise he would have mentioned the granite columns of its courtyard which came from Caesarea, an ancient Roman town. At the beginning of the XXth century Ottoman Sultan Abdul Hamid II decided to celebrate his accession to the throne by erecting a series of clock towers (at Constantinople near Dolmabahce Sarayi, his residence on the Bosporus). Some of these clock towers were eventually pulled down including that in Jerusalem, but at Acre and Jaffa they are still a landmark. The image used as background for this page shows a relief celebrating the construction of the clock tower. Acre has retained a distinct Ottoman character thanks to the mosque built by Ahmed al-Jazzar, governor of Acre at the end of the XVIIIth century. He most likely had his mosque designed by an architect familiar with the monuments of Constantinople. Al-Jazzar amassed a fortune by levying duties on all possible activities and with it he financed the construction of the mosque and of his nearby palace. 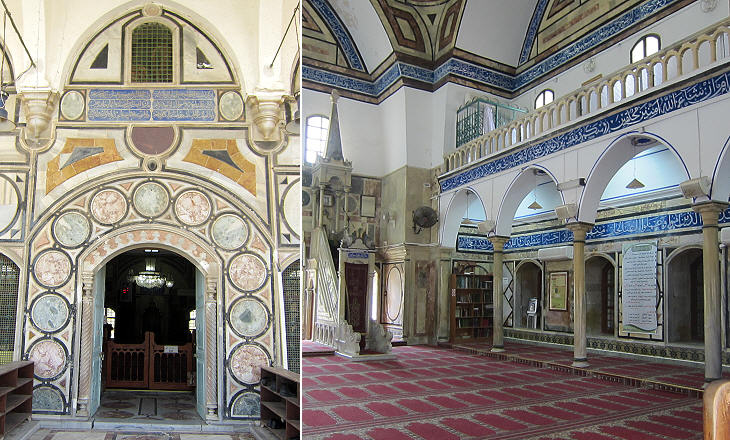 The ancient Caesarea is nine hours south of Kaifah. Djezzar removed from it many columns to adorn the mosque of Acre. Turner
Many great temples or churches or mosques were built by particularly cruel rulers. Al-Jazzar was one of them, jazzar meaning butcher, a reference to his past job of executioner in Cairo or to his cruelty: It is not uncommon to meet in the streets of Acre men who have been deprived of an eye, an ear or part of the nose by the ferocious Djezzar. (..) The tranquillity of the country depends entirely on the character of the Pasha. Under the ferocious Djezzar all was order and submission for in this country courage seldom shews itself when it has courage to contend with. (..) The whole country was in terror at the very report of his arrival. Turner (There) is a small fountain built by the present Pasha and inclosed with a neat railing from which the inhabitants are supplied with rainwater falling into marble basins. All are permitted to drink from iron cups chained to the railing, but none to carry water away. Turner
The Ottoman character of the mosque was completed by the construction of a "sebil" a kiosk where passers-by could drink. It is very similar to that near Sah Sultan Turbesi at Eyup which was built at approximately the same time. 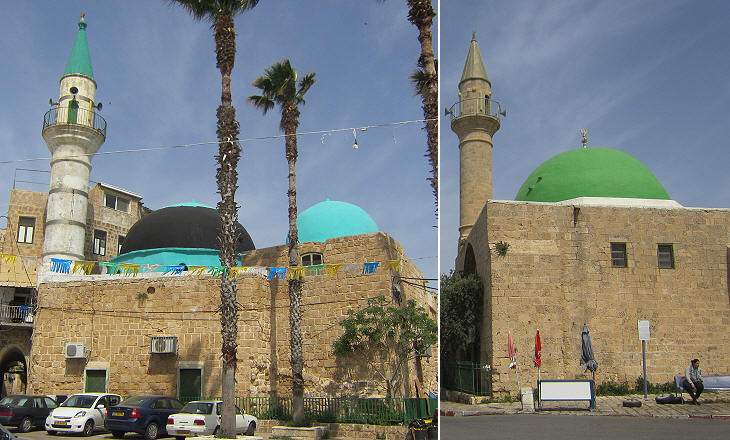 The old town of Acre is mainly inhabited by Arab citizens of Israel and most of its historical mosques are open.

Return to page one or follow Turner in an excursion to Kaifah.