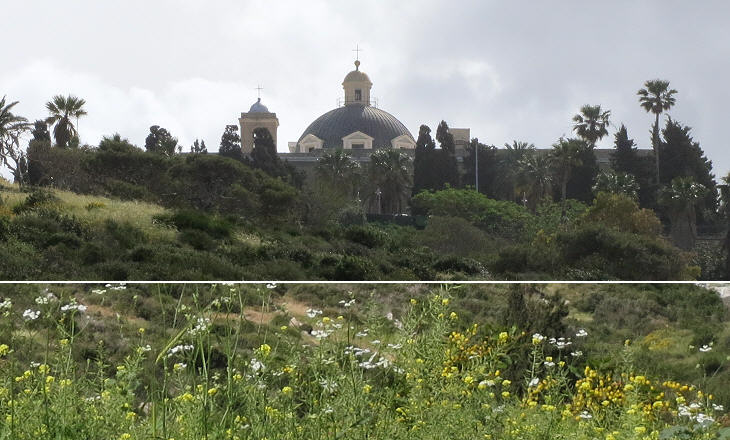 En route to Stella Maris, the Convent of the Carmelites

At eight o clock I left Acre to visit Kaifah, a small town under Mount Carmel reckoned three hours distance. Our road lay along the large bay of Acre on a hard beach with sand hills to our left. Lying on the shore I saw numbers of large polypi of a bright Prussian blue and great pieces of sponge. (..) At twenty minutes past ten we reached Kaifah, a small town surrounded with a new wall and having a small castle above it. (..) At eleven we set off for the Convent of Carmelites on the top of the mountain at the north west extremity. (..) Our road lay beneath an irregular grove of olive trees and the sides of it were absolutely covered with flowers.
W. Turner - Journal of a Tour in the Levant - 1820

Relief with the Carmelite Motto: "With zeal I have been zealous for the Lord God of Hosts" - Kings 19

The motto of the Carmelite Order is a sentence by Prophet Elijah who according to tradition lived in a cave at Mount Carmel. "Hosts" in Latin is translated as exercituum (army) and the choice of the sentence was most appropriate to the time when the Order was founded by a group of hermits on Mount Carmel. This occurred at the end of the XIIth century, after Jerusalem had been re-conquered by the Muslims and when all the Christian States in the Levant were under threat of being wiped out. See the website of the Order (it opens in a separate window). 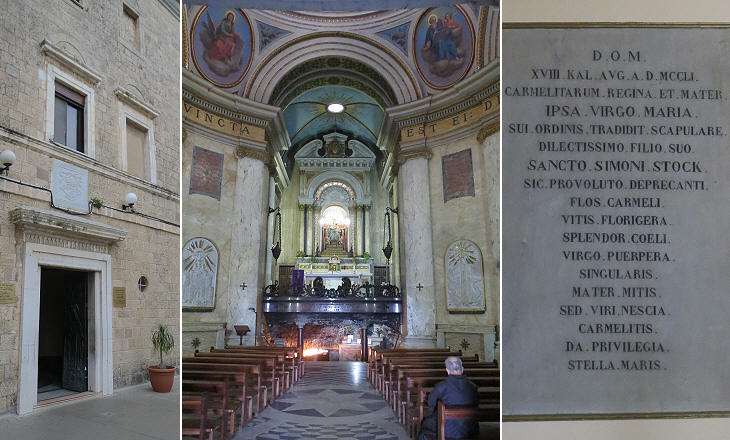 (left) Entrance to the church inside the convent; (centre) interior of the church; (right) inscription celebrating St. Simon Stock, one of the first priors general of the Order and listing Our Lady of Carmel's attributes including "Stella Maris"

The old church is now in ruins, its arched ceiling having been pulled down by order of Abu Dekel, a powerful Mameluke chief who about half a century ago came from Cairo to attack Syria (..) and settled himself here. He had ordered the whole convent to be destroyed, but when his soldiers had worked two days in ruining the church he died suddenly struck by God said the Catholicks of course for his impiety. (..) There were some English names on the walls of the convent to which I added mine. W. Turner
The convent and the church were rebuilt in the 1820s. Turner was an enthusiast admirer of Lord Byron and he tried to emulate him by swimming the Hellespont, but his attempt failed. The graffiti Byron left at Cape Sounion is still there, but an old monk I asked about that of Turner at Mount Carmel told me he had never seen it. The convent is very considerable. When the French attacked Acre they made their hospital here and some French words and the numbers for the wards and beds still remain on the walls. W. Turner
After Napoleon withdrew to Egypt, Ahmed al-Jazzar, governor of Acre, attacked the convent and massacred all the French.
It is an old custom for a French ship passing the convent to fire a gun and the convent hoists a white flag. W. Turner
Mount Carmel was regarded as a holy site by the ancient Egyptians and in particular by their seamen. Stella Maris, the attribute of Our Lady of Carmel which gives the name to the convent was an attribute of Isis and of Venus to whom temples were built by seamen as at Sabratha and Amathous. 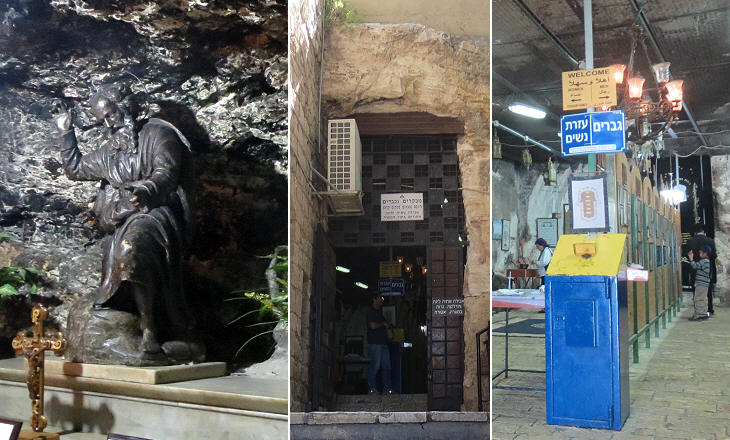 (left) "Elijah's Cave" inside the Carmelite church; (centre/right) another "Elijah's Cave" at the foot of Mount Carmel which has been turned into a synagogue and split into separate sections for men and women

There are a great number of natural caves on and about Carmel. W. Turner
Saint Thecha escaped from her persecutors in a cave at Maaloula in Syria and in another one at Silifke in Turkey, so it is not surprising to learn that Prophet Elijah lived in two caves at a short distance one from the other. Prophets and saints alike had a penchant for caves enjoying a commanding view. See the cave of St. John the Evangelist at Patmos. 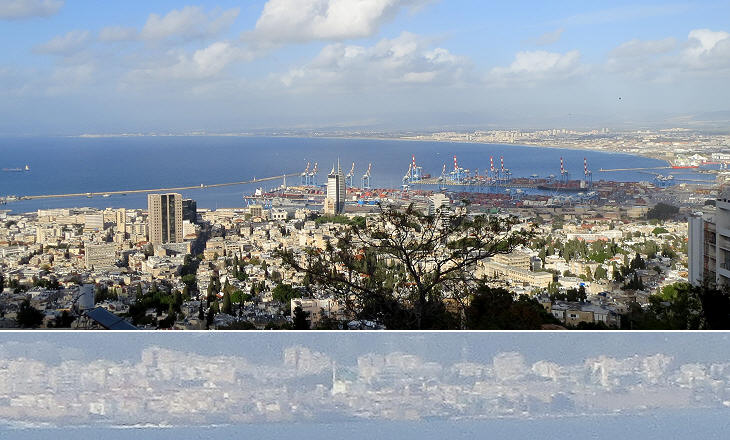 (above) View from Central Carmel, a modern neighbourhood of Haifa; (below) enlargement showing Acre at the end of the bay

From the terrace I saw the sea bounding the horizon to the west and Acre six miles to the north east. W. Turner
The walls of Kaifah which Turner saw were pulled down in the late XIXth century and eventually the whole old town and its harbour were replaced by modern buildings. Today Haifa is the third town of Israel and its main manufacturing centre as well as its main harbour. 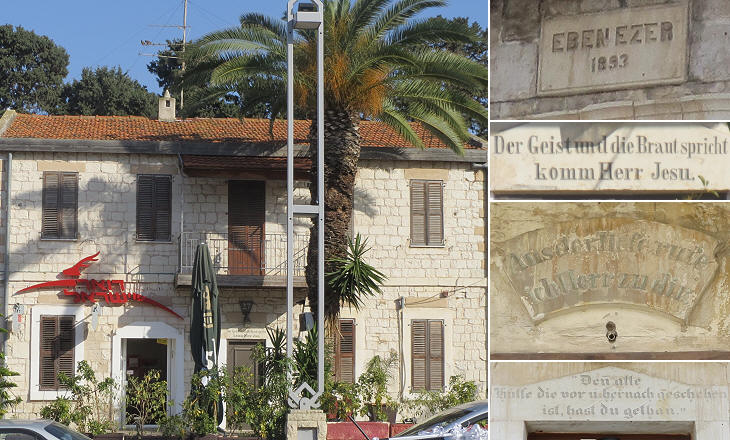 In the late XIXth century members of a sect of Evangelical Germans settled at Haifa (and other towns of the Holy Land). They developed a neighbourhood at the foot of Mount Carmel which reflected European town planning standards. Eventually the settlers had to leave their homes during WWII as they were regarded as enemies by British authorities and were deported. Today the main street has become a tourist attraction owing to its many restaurants and cafés. Bahà'i Gardens leading to the Mausoleum of the Bab, the Prophet of the Bahà'i faith

The remains of the Bab were buried in a simple mausoleum in 1909. This was enlarged and given a golden dome in 1953. The gardens were designed between 1990 and 2001. In 2008 the site (together with another Bahà'i memorial near Acre) was included by UNESCO in their World Heritage List (external link - it opens in a separate page) "for their profound spiritual meaning and the testimony they bear to the strong tradition of pilgrimage in the Bahái faith". The whole complex however is a modest copy-and-paste homework from a manual of architecture and rightly UNESCO refrained from commenting on its artistic value. 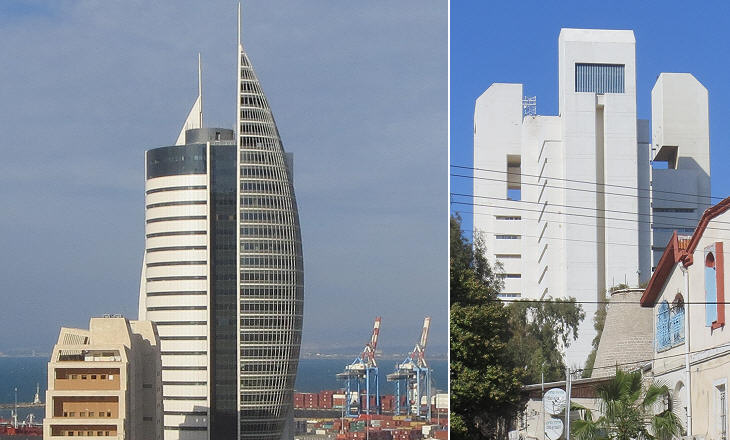 In Jerusalem they pray, in Tel Aviv they party and in Haifa they work. is a saying which reflects the character of the three cities. The skyline of Haifa provides evidence of the town's rapid growth. 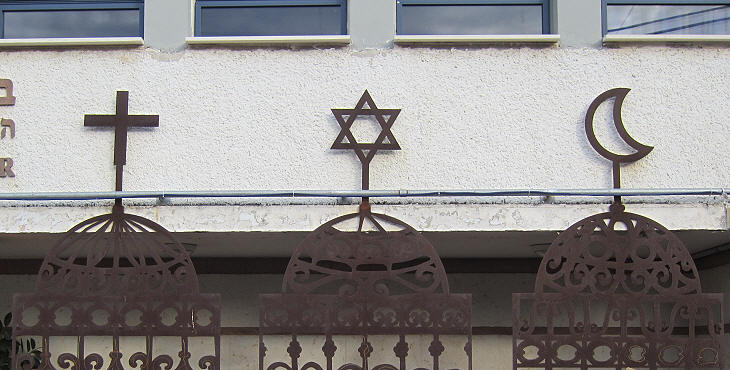 A centre for interfaith exchanges

The University of Haifa has programs to improve understanding among the believers of different faiths. The cosmopolitan, business-driven inhabitants of Haifa make it a place where religious divisions have a lower impact than in other parts of Israel.
The image used as background for this page shows the emblem of the Carmelite Order: a cross on a mountain surrounded by three stars: the star in the lower part symbolizes Elijah while the two stars above it represent Christ and Mary.