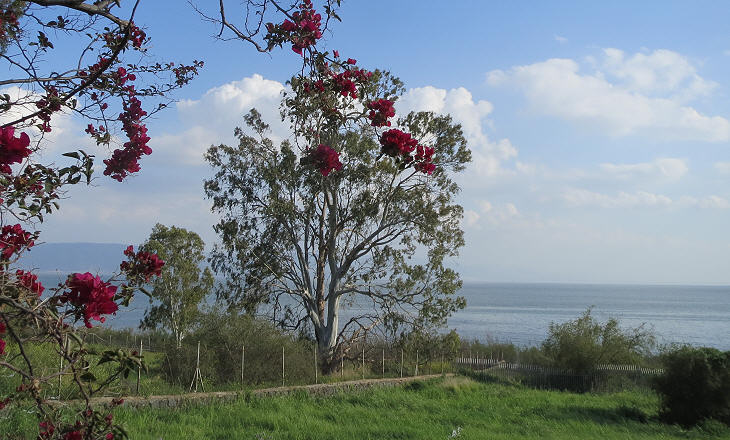 Northern shore of the Sea of Galilee aka Lake of Tiberias

We had "raised" a hill, and there, a few miles before us, with not a tree or a shrub to interrupt the view, lay a vision which millions of worshipers in the far lands of the earth would give half their possessions to seethe sacred Sea of Galilee! In a short time we dismounted on those shores which the feet of the Saviour have made holy ground.
Mark Twain - The Innocents Abroad - 1869 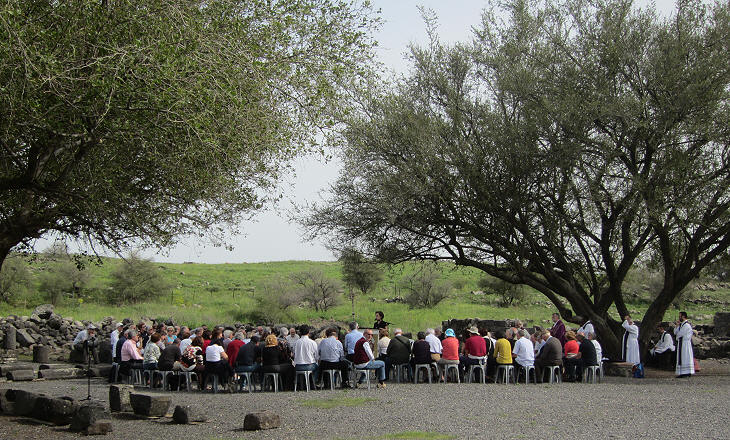 These men had been taught from infancy to revere, almost to worship, the holy places whereon their happy eyes were resting now. For many and many a year this very picture had visited their thoughts by day and floated through their dreams by night. To stand before it in the flesh - to see it as they saw it now - to sail upon the hallowed sea, and kiss the holy soil that compassed it about: these were aspirations they had cherished while a generation dragged its lagging seasons by and left its furrows in their faces and its frosts upon their hair. Twain
The holy sites on the northern shore of the Lake of Tiberias are visited by Catholic pilgrims in particular because St. Peter, who is regarded as the founder of the Roman Church, lived there. 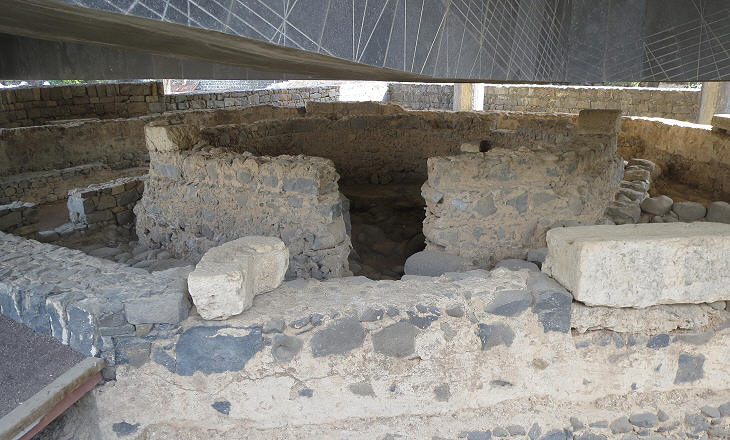 Walls of the octagonal basilica built above the house of St. Peter

As our Saviour lived at Capernaum, after he was ill treated by the people of Nazareth, and had heard that John was imprisoned, which was about the time that he entered on his ministry, so this place is very often mentioned in scripture. Here he frequently taught in the synagogue, and by the sea side. Many like wise of his most remarkable miracles were done in this place; as the paralytic was healed here, who was let down from the top of the house; here he also restored two men to their sight, and cured one who was possessed of a devil; he healed likewise the centurion's servant, only by speaking a word; and raised from the dead the daughter of Jairus, the chief man of the synagogue.
Richard Pococke - A Description of the East and Some Other Countries - 1745
We had left Capernaum behind us. It was only a shapeless ruin. It bore no semblance to a town, and had nothing about it to suggest that it had ever been a town. But all desolate and unpeopled as it was, it was illustrious ground. Twain
Of Capernaum, Gennesaret and Chorasin there are now no remains. (..) Mr Burckhardt the enterprising traveller who passed through these countries under the name of Sheikh Ibrahim, afterwards told me in Cairo that there is a village in the vicinity called Kafer Naym. I inquired earnestly when on the spot for any remains of these places but neither saw nor could hear of any.
William Turner - Journal of a Tour in the Levant - 1820
In 1894 the Franciscans bought a piece of land in Capernaum and started excavations which led to identifying an octagonal Vth century Byzantine sanctuary which was built upon an earlier church which in turn stood on the site of the assumed house of St. Peter. A IVth century AD synagogue and some dwellings were found near the church.

A rare boat on the lake

The sea of Tiberias is a very fine lake; the mountains on the east come close to it; the country on that side has not a very agreeable aspect. (..) The water is esteemed very good, and abounds much in fish, and has crabs in it, as there are in most of the lakes and rivers of Asia. Pococke
They told me that the commerce of Tiberias consists in (..) fish from the sea of Galilee sold to the neighbouring villages of which there is a very small quantity, as there is not a single boat on the sea. Turner
During luncheon, the pilgrim enthusiasts of our party, who had been so light-hearted and so happy ever since they touched holy ground that they did little but mutter incoherent rhapsodies, could scarcely eat, so anxious were they to "take shipping" and sail in very person upon the waters that had borne the vessels of the Apostles. Their anxiety grew and their excitement augmented with every fleeting moment, until my fears were aroused and I began to have misgivings that in their present condition they might break recklessly loose from all considerations of prudence and buy a whole fleet of ships to sail in, instead of hiring a single one for an hour, as quiet folk are wont to do. (..) There was a time, when the Saviour taught here, that boats were plenty among the fishermen of the coasts - but boats and fishermen both are gone, now; and old Josephus had a fleet of men-of-war in these waters eighteen centuries ago - a hundred and thirty bold canoes - but they, also, have passed away and left no sign. They battle here no more by sea, and the commercial marine of Galilee numbers only two small ships, just of a pattern with the little skiffs the disciples knew. Twain

Church of the Primacy of Peter 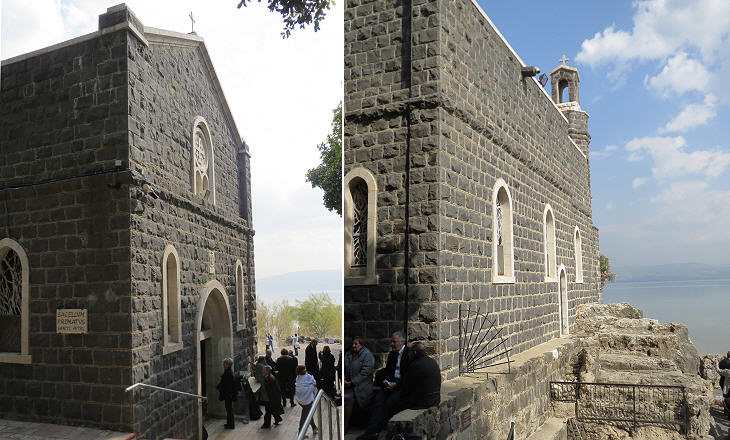 (left) Façade; (right) side view showing the rocks upon which Jesus and the apostles had their meals

The place was nevertheless the scene of an event whose effects have added page after page and volume after volume to the world's history. For in this place Christ stood when he said to Peter: "Thou art Peter; and upon this rock will I build my church, and the gates of hell shall not prevail against it. And I will give unto thee the keys of the Kingdom of Heaven; and whatsoever thou shalt bind on earth shall be bound in heaven, and whatsoever thou shalt loose on earth shall be loosed in heaven." On those little sentences have been built up the mighty edifice of the Church of Rome; in them lie the authority for the imperial power of the Popes over temporal affairs, and their godlike power to curse a soul or wash it white from sin. To sustain the position of "the only true Church," which Rome claims was thus conferred upon her, she has fought and labored and struggled for many a century, and will continue to keep herself busy in the same work to the end of time. The memorable words I have quoted give to this ruined city about all the interest it possesses to people of the present day. Twain
The reference to the primacy of St. Peter quoted by Twain (Matthew 16) was said at Banias (Caesarea Philippi). In 1933 the Franciscans built a church two miles west of Capernaum on the assumed location of an event (John 21) which is regarded as another reference to the primacy of St. Peter. 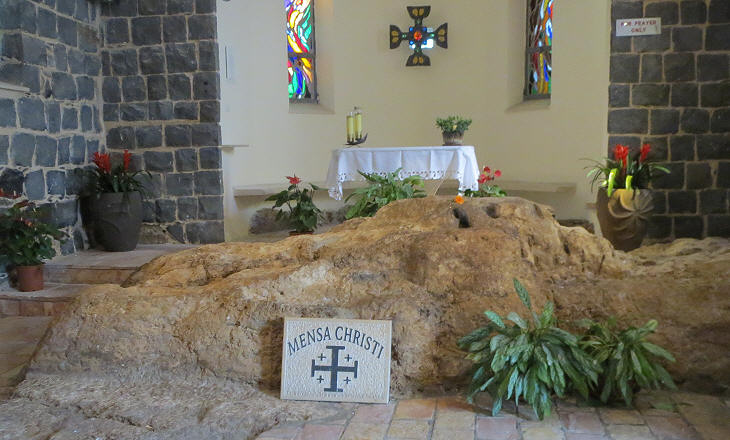 Interior of the church with "Mensa Christi" (Christ's dining table)

Church of the Multiplication of the Loaves and Fishes 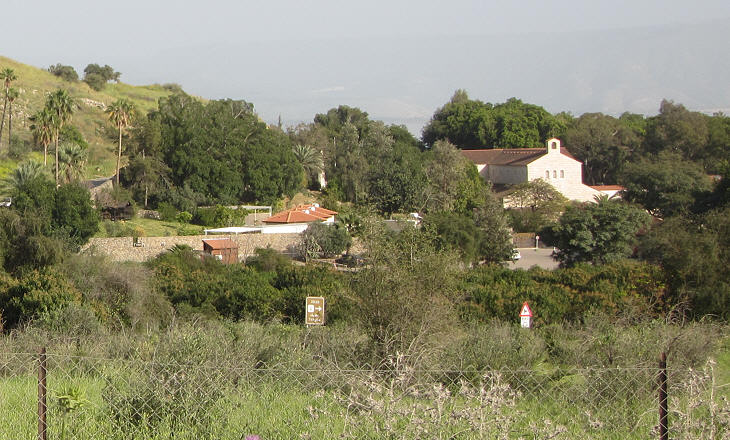 The church and Mount of Beatitudes on the left

He worked miracles in Bethsaida and Chorazin - villages two or three miles from Capernaum. It was near one of them that the miraculous draft of fishes is supposed to have been taken, and it was in the desert places near the other that he fed the thousands by the miracles of the loaves and fishes. Twain
In ca 383 Egeria, a pilgrim from Spain, described in a letter to her friends that a church had been erected on the site where Jesus had fed the multitude with five loaves and two fishes. 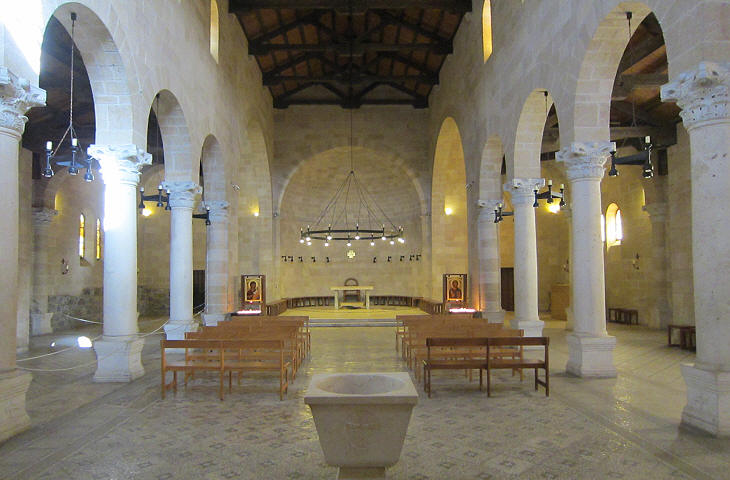 In 1932 German archaeologists identified the ruins of a Vth century Byzantine church which had replaced that seen by Egeria. In 1982 a new church entrusted to German Benedictine monks was built on the ancient foundations and incorporating its artefacts (chiefly mosaics). 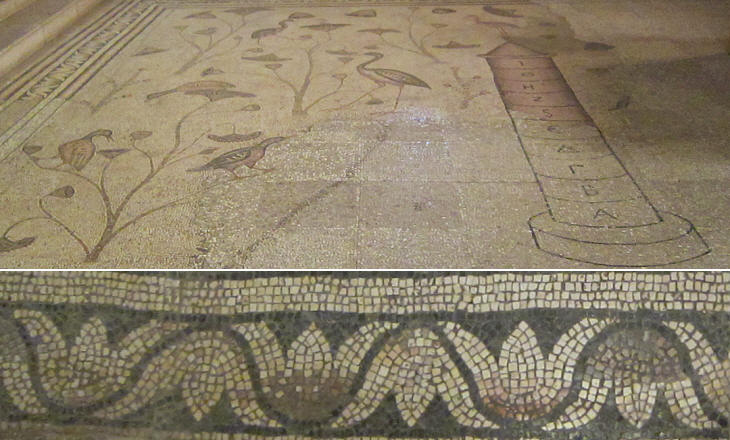 (above) Main non-geometric mosaic; (below) a decorative pattern

The Holy Land does not house many ancient churches; in part because they were destroyed by Persian and Arab invaders, but chiefly because they were replaced by new churches (and this occurred well into the XXth century). The mosaics of this church are a rare example of Early Christian art. The presence of a nilometer, a structure for measuring Nile's water level, is evidence that the mosaicists came from Egypt. A mosaic depicting a similar nilometer has been found at a Roman villa at Diocaesarea / Sepphoris. 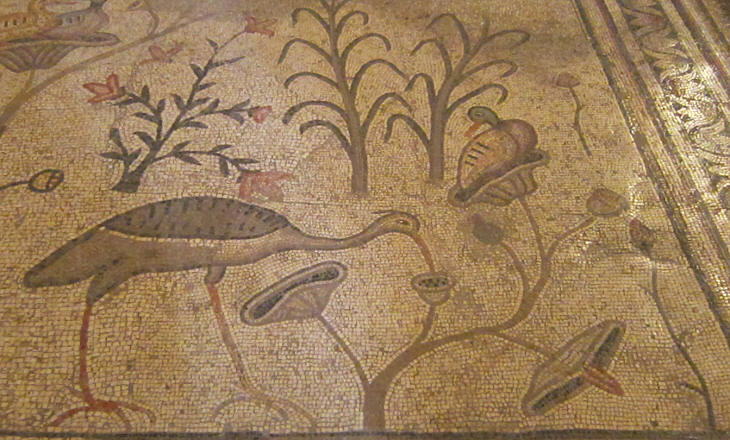 The species of plants and birds depicted in the mosaic are further evidence that the mosaicists came from Egypt, together with the fact that they are not placed into frames as was customary in other parts of the Roman Empire (you may wish to see a large "Nilotic mosaic" in Italy). 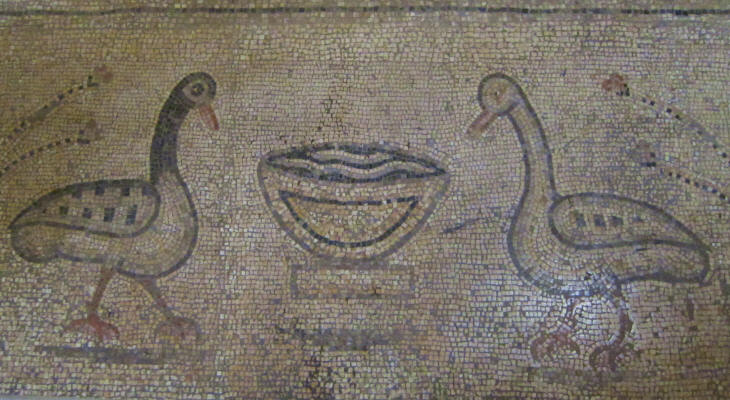 A detail having a religious meaning

Overall the mosaics of the church could have embellished the hall of a private mansion, because they did not have many religious references, exception made for a small mosaic depicting a basket with loaves and two fishes (you can see it in the image used as background for this page).
The drinking geese are perhaps a reference to the drinking doves, which appear in many ancient mosaics (e.g. at Villa Adriana) including those found inside early churches (e.g. S. Costanza in Rome). 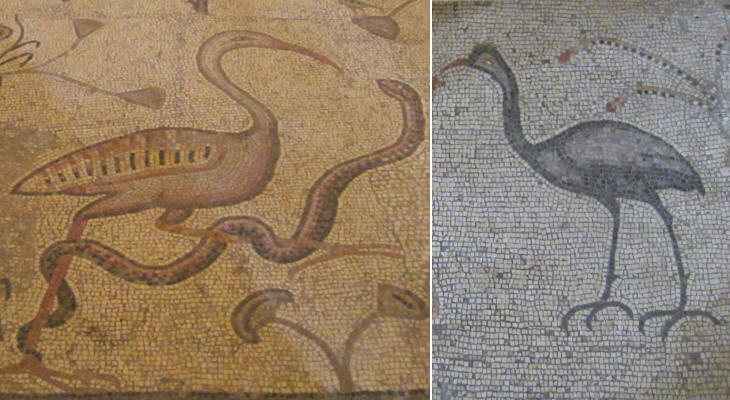 Other details of the main mosaic